If you’ve been playing with LEGO for any length of time, you’ve probably started to collect a few minifigures; some of which you may feel are more special than others. In this article, I’m going to talk about a few ways in which you may choose to display your minifigures.

For myself, I realised when I started to think about this article that I must have close to 1,000 minifigures in my collection. Some have come from sets, others are collectible figures and then there’s the “pick a brick” toys and finally the custom figures. Whilst many are now hidden away in boxes there are still quite a few out on display, so getting them displayed properly makes dusting a lot easier!

Probably the most common way to display minifigures is the wall display. I found a company in Germany that supplies these acrylic frames with a mirrored back. They are perfect for minifigure displays when you want to show the back printing as well as the front! These are great when you have many figures making up the collection (for example, the Collectible Minifigure sets, or the ever-expanding variations of Star Wars stormtroopers). As the front is held by slots, it is very easy to add (or change) what is displayed.

A smaller variant of this is the collectible box. Here you can store quite a few figures, so perfect for the CMF series, such as the Simpsons above (I have another which has Batman figure variants).

I’ll come back to “normal” picture frames in a bit, but for now I’d like to focus on the deeper frames. These can be bought relatively cheaply from craft stores in assorted sizes. They are perfect for displaying your figures and you’re almost limited by your own creativity!

LEGO created a display frame which uses a base plate to show off your people; this is something that you can easily reproduce yourself. Remember that the figures don’t fit flat to the backboard, so you may need to create a little stand; this can be achieved by either using an “illegal” connection or using one of the bricks with studs in more than one direction. Don’t forget that the figures have stud holes in the back of their legs either! Depending on the minifigure (and how much it sticks out from the backboard) you may have to choose not to use the glass in the frame. 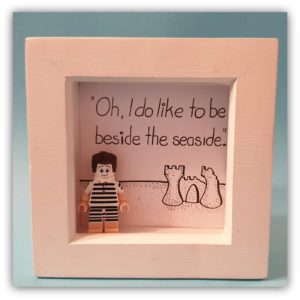 But you don’t need to just use a baseplate; you could glue the bricks to the back if you wanted to. Whilst I know I have enough bricks around that I could easily sacrifice one or two, sometimes careful set up of the frame can negate the need to do this, especially if you’ve been a little artistic. The image above is a good example of this. I used a small box frame and drew the background. The figure is held using a well-placed discrete piece of Blu-tack. This method is great if you want to put equal focus on the background without destroying it (which would be good for something like creating a “memory” image. Minifigures of a happy couple with their wedding photo in the background, for example).

Something that is quite new, and quite awesome, is LEGO tape. This is a roll of soft rubber with a sticky back and has rows of studs on it. It comes in a variety of colours and is perfect for creating a temporary holding spot for those minifigures! Okay, it’s not the prettiest way for displaying minifigures, but it is effective.

Obviously, the easiest way to display a single minifigure is just to leave them out and accessible. Around my home office I have loads of minifigures which are close to me in case I become inspired! By leaving them out, you can also press gang them into doing something useful like holding your phone charging lead. But sometimes you want to put that figure away somewhere safe, or even hang it from the Christmas tree – and for that you need a box.

I have so many of these as they are great for making that special sigfig for someone! I’ve used them for figures for my dad and my brother and because they’re boxed, they look far more special and unique than just standing loose. 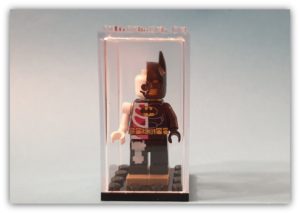 Most of my single figure boxes are bought through Firestar Toys. With the studs on the top these can be stacked, although for the most part I have them side by side. You can even get a little attachment that you can fix to the top of the box so it can be hung on the tree. The 4×4 base plate sits snugly to the clear case. I feel I ought to point out that in some cases you do need to be a little creative using 2×1 jumper plates to make the figure sit in the centre of the box, but this really isn’t a hardship in the overall scheme of things, especially when your figure is holding something like a sign. 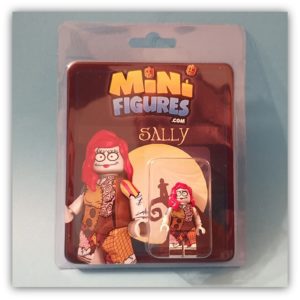 Some custom LEGO figures are supplied in “blister pack” format, with a large backing card and a box for the figure to be stored in. This does look more like the typical approach for selling collectible figures and usually the artwork for the card is as detailed and as fun as the figure itself. The challenge with this style of display is that it doesn’t make effective use of space to display it, so with the exception of a couple I tend to remove the card and store it elsewhere whilst the figure will go into a single figure box, the larger display or into “general population”.

MOC (my own creation) displays are great fun as they allow the builder to properly showcase the figure. Some companies, like Bricksanity customs or Firestar Toys, sell backing bricks which can simplify the show stand. Above I have used a straight wall to show my Lester figure and below you can see the whole “London” theming for another minifigure, Chester. 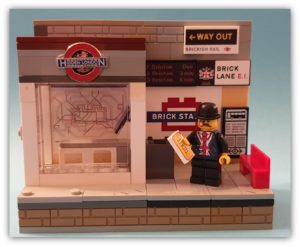 A few years ago, the drinks company Coca-Cola released a series of labels with people’s names on them; I managed to find my name and created this MOC to incorporate the label and a few other elements to bring it all together. 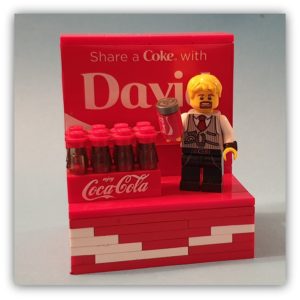 But these stands don’t have to be overly complex; one of the fun displays I have uses a brick I had printed with my nickname, a custom printed torso and a hand which was 3D printed for me. 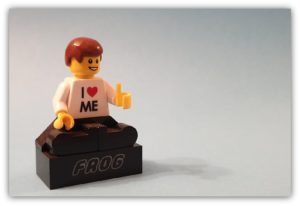 Leave them in the set – or include them in it!

Most LEGO sets come with minifigures, and a perfect way to display the figures is to keep them with the set. I was given the roller coaster set as a birthday present, and whilst it takes up a large amount of space, I don’t want to dismantle it. I still have the figures queuing and riding on the set, but I’ve also included a couple of workmen on the scaffolding; one of which I reckon will need a help down soon! 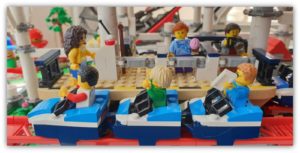 Whilst this article has focused on how to display your minifigures in real life, that isn’t the only way to show them off. Having them on the shelf, wall, or desk is great to be able to physically see them, but sometimes using a virtual route can be a lot more effective and perhaps a lot more fun. 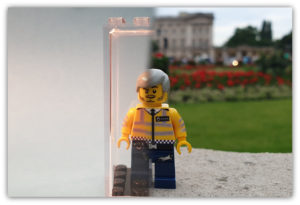 They say a picture is worth a thousand words, and this is no truer than being able to put a minifigure into a more dynamic situation and capturing the memory through a photo. As well as setting up little photo shoots on my desk, I also use the garden and as my image below shows the real world too. I took my minifigure for a little jog around the River Thames and as you can see, I took photos in all manner of locations, such as by the Tower of London and by Buckingham Palace! 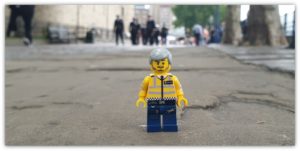 Obviously you want to be careful when you go out to take photos and be aware of the limitations that you might have to accept (focusing on the figure means in most cases sacrificing the background, unless you edit the picture after), but the final image will be more interesting. You can then choose to have the photo printed and put behind a normal print frame or share it on social media (or even both).

How do you display your minifigures?

So, in this article, I’ve shown many diverse ways in which you could display your minifigures. I didn’t include the very clever “building the display into a gap in the wall” (because most people have normal walls in their house), but I’m sure that I’ve missed a few, so my question is this: have I missed a way of displaying my figures? I’d be interested to know if you have a way that is interesting and unusual. Now, if you’ll excuse me, I have a few cases to dust… 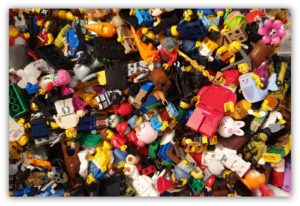