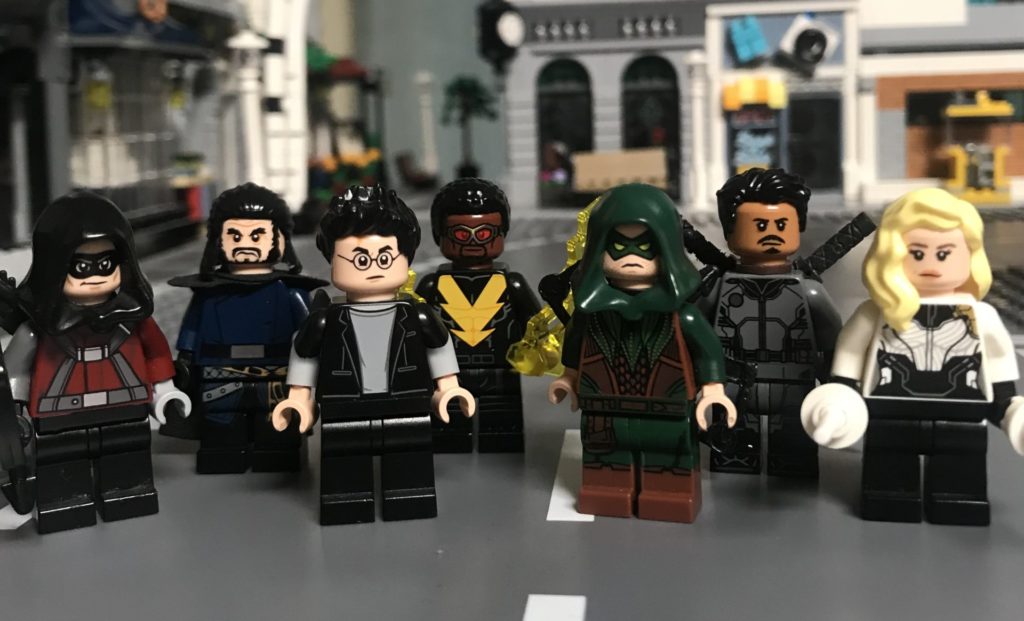 LEGO has been releasing Marvel and DC themed sets consistently since 2012. Strangely enough, outside of a few Comic-Con exclusive minifigures, LEGO hasn’t released any sets that are connected to the CW’s DC Superhero Shows (commonly referred to as the Arrowverse), which also debuted in 2012.

Now, the Arrowverse is home to some of my favorite DC characters like Green Arrow, Deathstroke, and many others, and while LEGO has released sets containing some of these minifigures before, they haven’t been related to their Arrowverse counterparts and they’ve often only been included in one model. So, since I don’t have $300 plus to spend on the Green Arrow comic-con exclusive, me and my brother decided it was time to bring him and other Arrowverse characters into LEGO by making our own custom versions of them. And now, I’m going to walk you through it so you can make them as well. 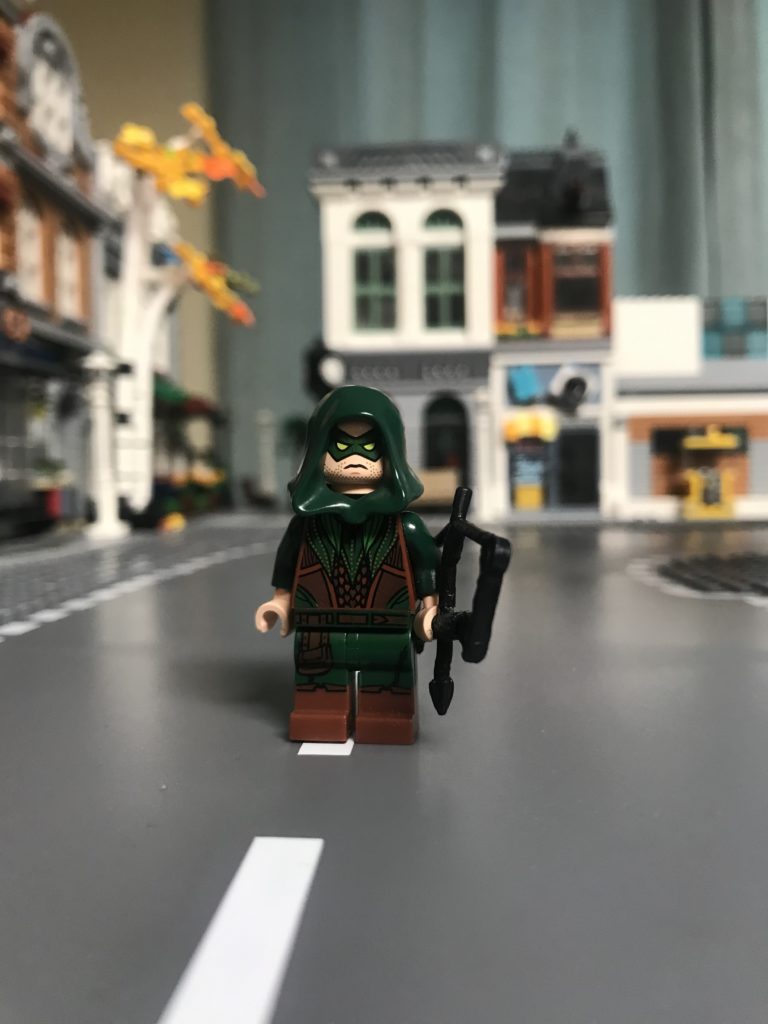 Green Arrow. The Emerald Archer. The man who kickstarted the Arrowverse. Green Arrow is such a prominent DC character, especially after Arrow was such a hit. Despite being such an iconic DC character, outside of his 2013 Comic-Con minifigure, he was only released in one set back in 2016: Darkseid Invasion.

To make Green Arrow, you will only need one part from the official minifigure: the face. It’s hard to make Green Arrow without his signature green mask, though you could use one of the newer Robin faces with green masks if you are hard pressed to find one. The other minifigures needed for this version are the Mirkwood Elf from The Hobbit, which is where I got the dark green hood and torso from, and the Rogue Archer from LEGO Minifigures Series 16, which is where the legs are from. To top it off, you’ll need the compound bow that is prominently released alongside Hawkeye. 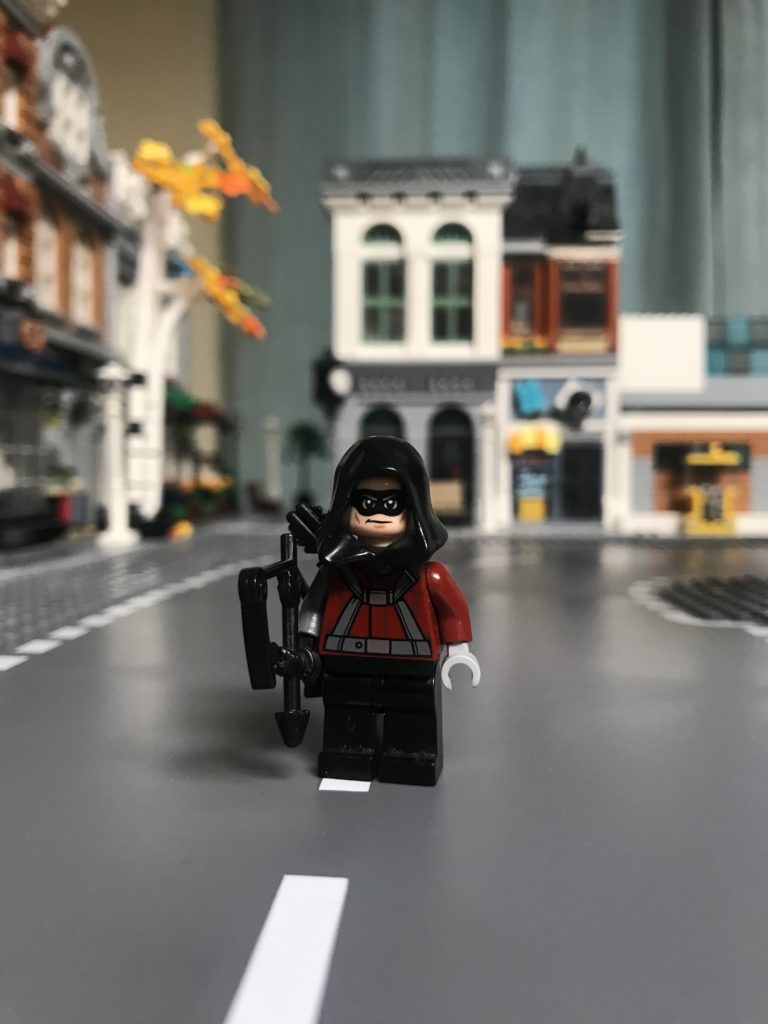 Every good hero has a sidekick. Batman has Robin. Captain America had Bucky Barnes. In Arrow, Oliver Queen takes Roy Harper under his wing, or as he goes by in the Arrowverse, Arsenal. Roy also had a Comic-Con exclusive release in 2015.

Most of the parts needed for Arsenal are pretty common and he was the easiest for us to make. You’ll need a black hood, a pair of black legs, another compound bow, and a black quiver. The torso can be found in the Skyhopper Pilot minifigure, which is now easy to get with the recent release of the Skyhopper microfighter last year. The last piece needed is the Lone Ranger face, though you could substitute that for Hawkeye’s face from his Avengers or Age of Ultron variants. The choice is yours. 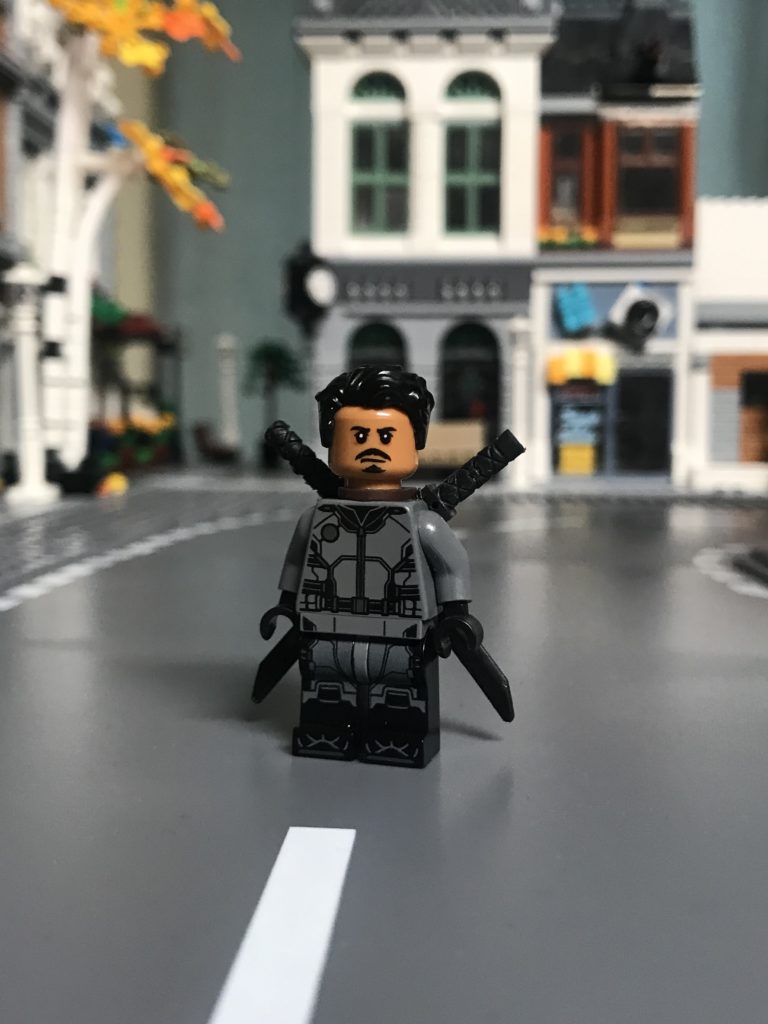 Slade Wilson (aka Deathstroke) is one of my favorite comic book villains of all time. Sadly, LEGO has only released him in one model, the Batboat from 2016. I love his costume in Arrow season 2, but without his iconic orange mask, I wouldn’t be able to do it justice. What I could do, however, was make a figure based on his time with Oliver on the island of Lian Yu.

To make Slade’s Lian Yu appearance, you’ll need parts from four minifigures. The hair is the most common part for this figure and can be found on characters from Superman to Poe Dameron. The scabbard for his katanas can be found on Reaper from the Overwatch theme. The other parts are a bit trickier. You’ll need Tasu Leech from the 2015 Millennium Falcon for the face and Spider-Man Stealth Suit from the 2019 Molten Man set for the torso and legs. All in all, I’m really happy with how this minifigure turned out, but LEGO, if you could release another Deathstroke sometime soon, that’d be great. 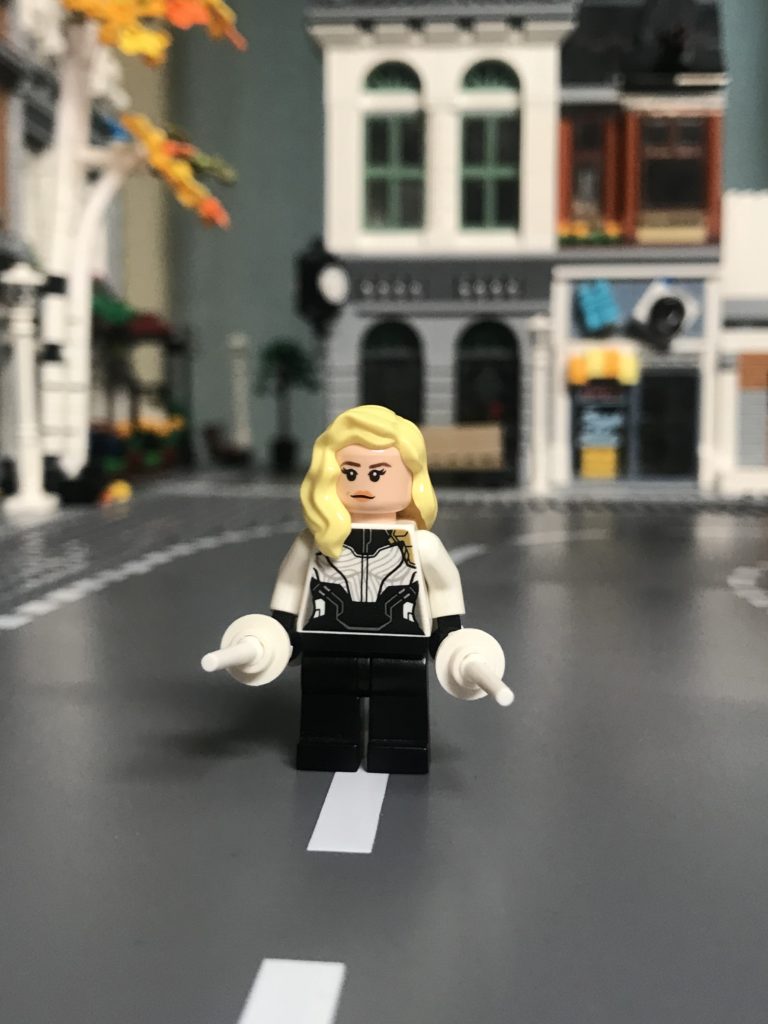 Sara Lance (aka White Canary) was first introduced in Arrow, but really came into her own on the show Legends of Tomorrow. She’s another character that, for the most part, is really easy to make. Her face, hair, and legs are fairly commonplace and can be found on a variety of minifigures. Her torso and staves were a little bit harder to come by. The torso is only found on Proxima Midnight from the 2018 Hulkbuster set, and this was a part we had to acquire through Bricklink. You can make her staves with two white lightsaber hilts and two white wands from the newer Harry Potter minifigures. She’s not the most detailed figure we made, but she looks fairly accurate to her on-screen counterpart. 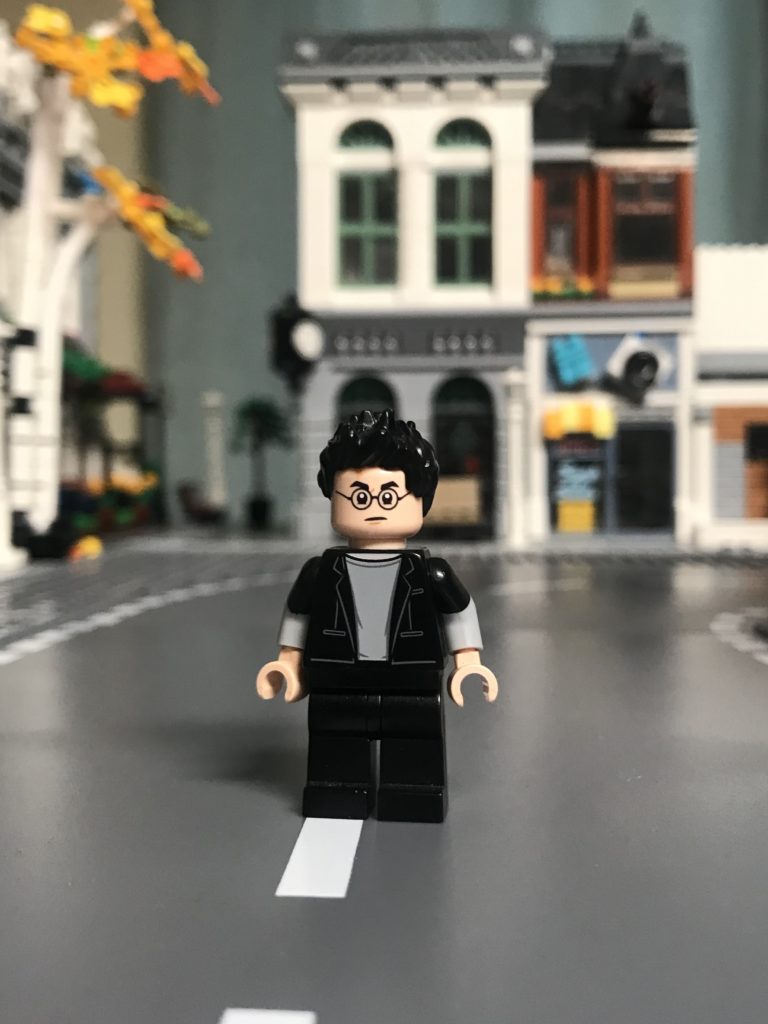 Eobard Thawne, or Reverse-Flash, is my favorite villain in the Arrowverse (that is, Eobard in season 1 of The Flash). While LEGO has released Reverse-Flash in one set before, they’ve never released a minifigure of him in his Harrison Wells appearance, which is a shame. But since they haven’t, I’ll let you in on how to make him.

Like White Canary and Arsenal, you’ll just need plain black legs for Eobard. The face is really commonplace these days as you can find it on just about every Harry Potter figure currently on the shelves. The lightning bolt scar doesn’t match his appearance but this was the only face with glasses that I had and the black spiked hair covers it up for the most part (it also matches his and Flash’s lightning bolt sigil). The torso is Bruce Banner’s from Thor: Ragnarok and Avengers: Infinity War, and the arms are from the Video Game Guy from LEGO Minifigures Series 12. I’m very happy with how this Eobard turned out. 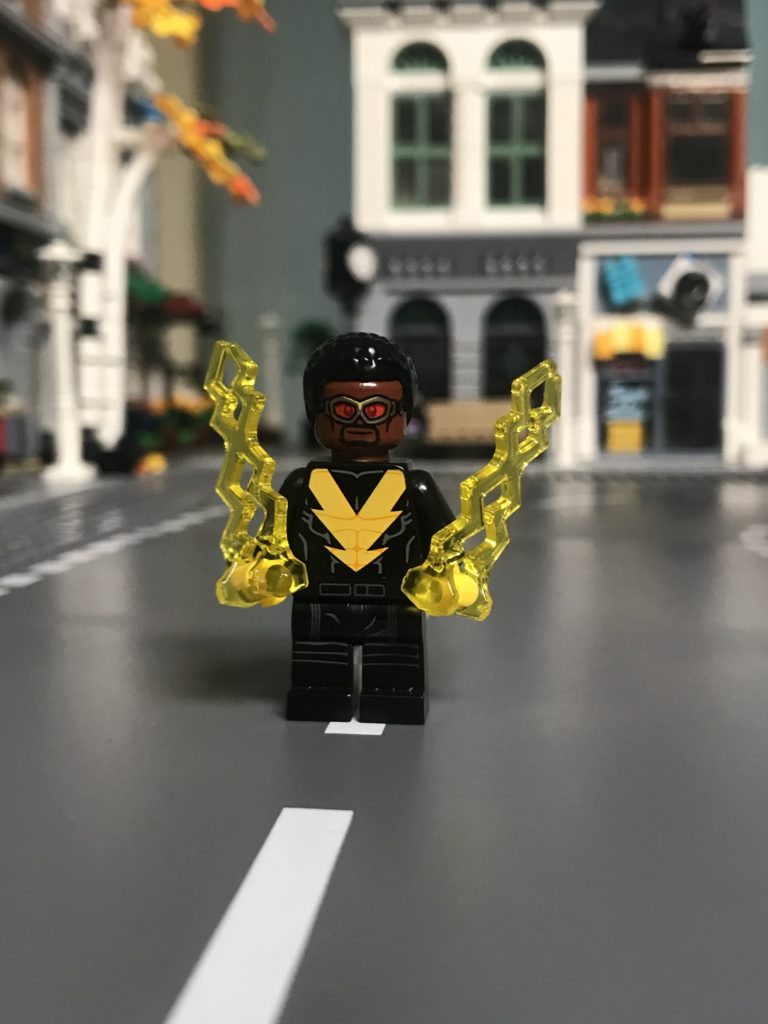 Black Lightning is one of the more recent titular characters in the Arrowverse. Like Green Arrow and Arsenal, Black Lightning was released as a Comic-Con exclusive, though his was more recently being from 2018. This custom of Black Lightning is an amalgamation of Black Vulcan from The LEGO Batman Movie and Falcon from Captain America: Civil War. The torso comes from Black Vulcan while the face and hair come from Falcon. The printed legs are from the First Order TIE Pilot, though regular black legs will suffice. Finally, the yellow lightning bolts can be found with Bumblebee from the DC Collectible Minifigure Series. 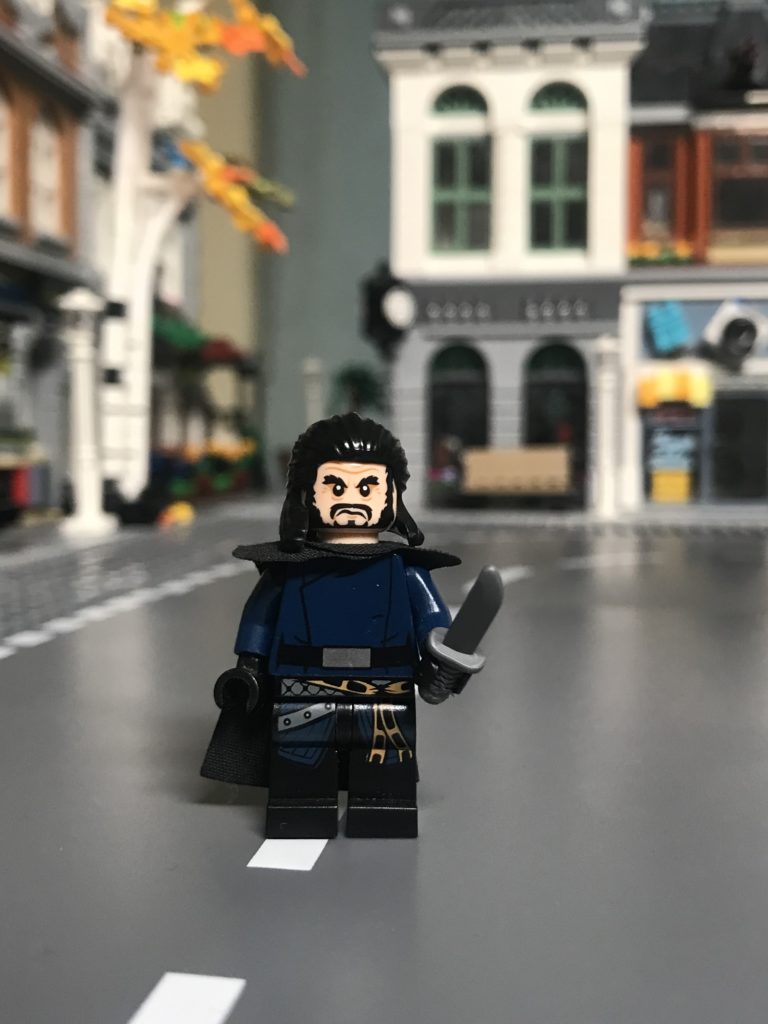 Vandal Savage has been a part of the DC mythos since 1943 and is a recognizable name for fans of this universe but has yet to be released as a LEGO minifigure. He first appeared in the Arrowverse in a Flash/Green Arrow crossover that led into the first season of Legends of Tomorrow. He’s not the best Arrowverse villain, but he’s also not the worst and his appearance is kind of cool, so I decided to give him a go.

Once again, Tasu Leech was used to create this custom, this time providing Savage’s hair. His face comes from Blackbeard, from 2012’s Pirates of the Caribbean line. Reaper is also used in this custom, giving Savage his flowing cape. You can use a standard black cape if you’ll like, but I think this smaller version works best for him. His torso is from the First Order Officer from a 2017 battle pack, and his legs can be found on Doctor Strange’s Infinity War variant. I got to say, while I’m not a huge fan of his character, this custom might be favorite on this list. He turned out far better than I expected.

That’s all I have for now. I hope you enjoyed this article, and it gave you the blueprint you needed to make your own LEGO Arrowverse customs. I’ll be sure to make a second part to this article soon. Feel free to comment any characters from the Arrowverse you think I should try, or even other franchises if you’d like.

Custom Minifigures: Is it real LEGO?