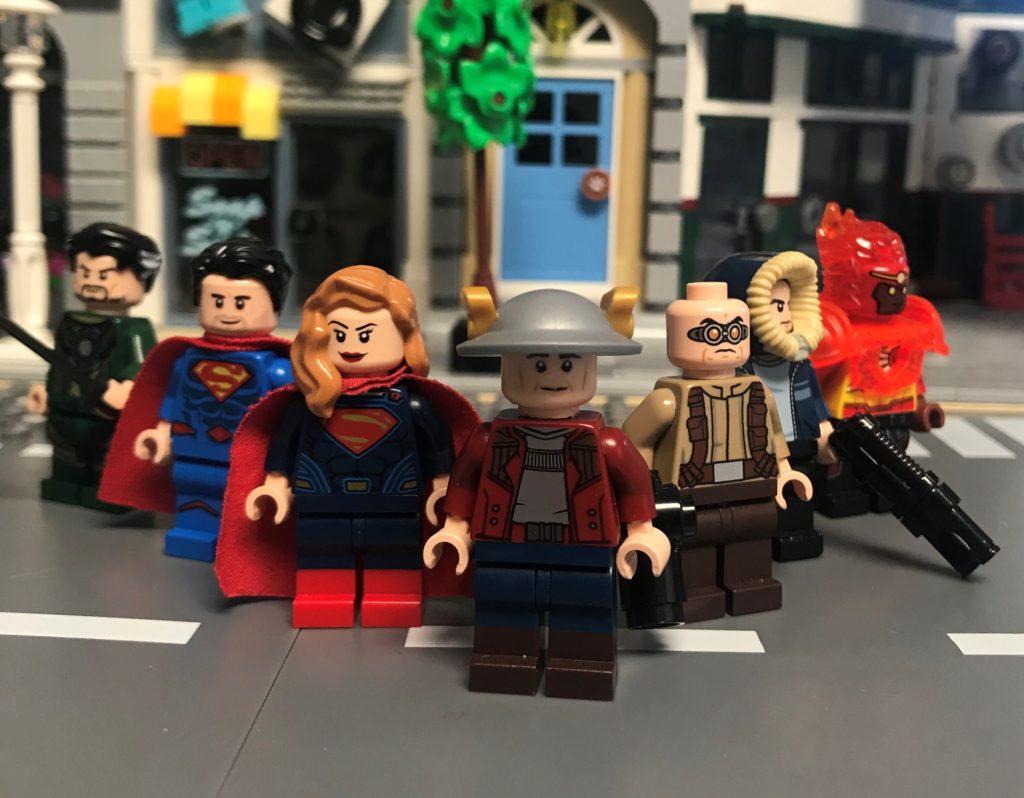 Hello there and welcome to a continuation of the LEGO Arrowverse Custom Minifigures series. Once again, we are delving into the branch of DC comics that LEGO has only to this day made Comic-Con exclusives for: The Arrowverse. Since it doesn’t look like we’ll be getting a Waverider or a S.T.A.R Labs set any time soon, fans of this TV universe and LEGO have to use their own creativity (and spare parts) to bring the CW roster of heroes and villains to life. Fortunately, me and my brother have a blueprint for you.

In my last article of this series, there was a predominant focus on characters from the show that started it all: Arrow. In this follow up article, I will be showing you an array of characters featured on DC’s Legends of Tomorrow and Supergirl. As always, feel free to leave a comment below telling me who’d you like to see a custom tutorial for. These suggestions can range from more characters from the Arrowverse, or most any other branch of superheroes. With that out of the way, let’s get down to it. 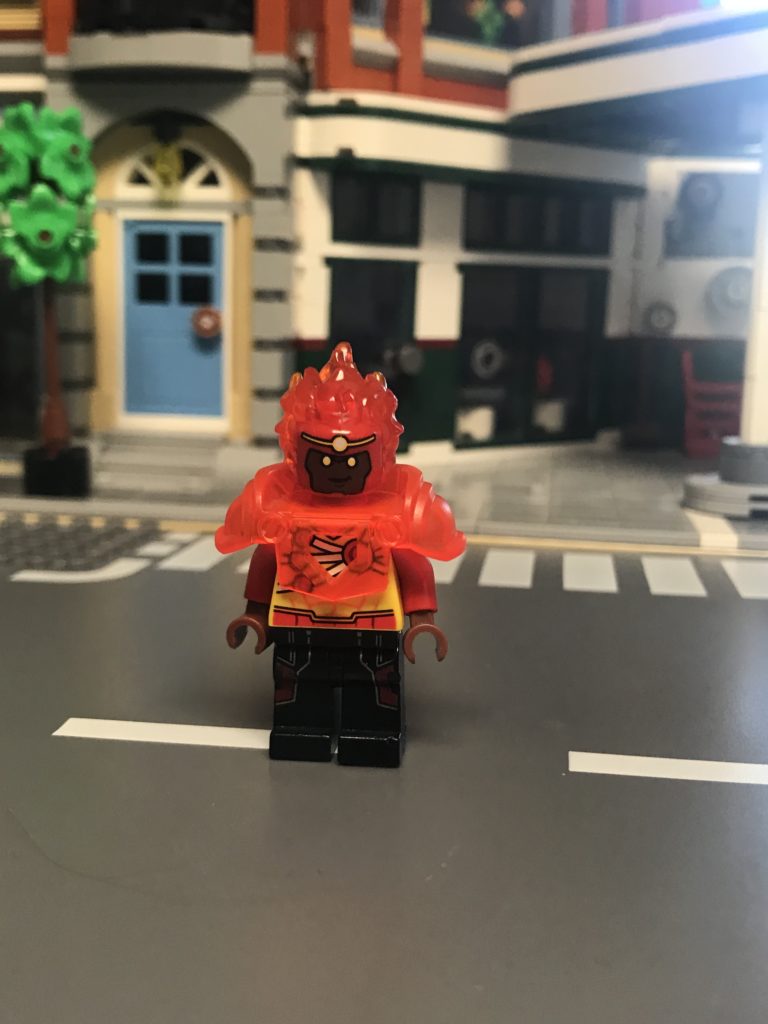 Firestorm made his Arrowverse debut in Season 1 of The Flash. This fiery hero was the result of Professor Martin Stein and Ronnie Raymond merging together. However, in the show’s second season and the later show, DC’s Legends of Tomorrow, Martin Stein had a new nuclear companion: Jefferson Jackson. It is the latter version of this character that this custom is based on.

In order to make this Firestorm, you will need the Firestorm minifigure from 2018’s Set 76097: Lex Luthor Mech Takedown. More specifically, his head and torso. Replace his bright yellow hands with brown one’s to make them match the skin tone of his face. For the legs, I recommend you use Ant Man’s. Our version uses the 2015 variant’s, but the 2018 version works just as well. To top it off, we gave Firestorm the bulky trans-orange armor piece that can be found on many Nexo Knights minifigures. 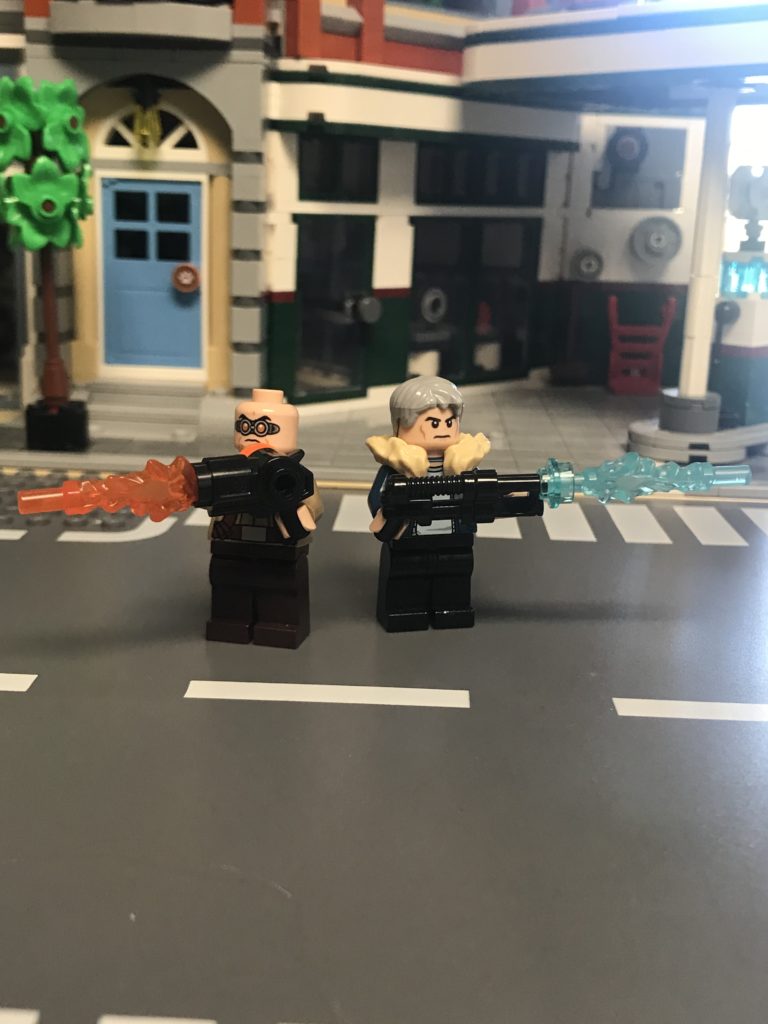 Loosely sticking to the theme of fire, next up we have robbers turned heroes of the timeline, Leonard Snart and Mick Rory. Much like Firestorm, both of these characters made their first appearances in The Flash’s first season as members of the titular character’s Rogues Gallery, but they both made their marks as heroes in DC’s Legends of Tomorrow.

For the most part, the parts needed for these two anti-heroes are fairly common. To make Captain Cold, you’ll need the standard Lex Luthor face (which can be found in dozens of sets), a light bluish gray tousled hair, Harry Potter’s blue jacket (mainly found in Prisoner of Azkaban sets) and a pair of plain black legs. You can also alternate between him having a raised or lowered hood by using either a dark blue parka hood or the neck attachment from Kraven the Hunter, respectively. To make his freeze gun, all you need are a black galaxy blaster and a pair of black binoculars. Then, you just attach a trans-blue power burst to the end.

Heatwave is even more simplistic. His torso and legs can be found on a number of Resistance officers and soldiers. Their tan/beige color scheme really matches Mick Rory’s wardrobe. We used the one from the Male Resistance Soldier in 2015’s First Order Transporter. His head can be found on the 2021 LEGO Doctor Octopus minifigure, who’s goggles look really similar to the one’s worn by Heatwave in the earlier seasons of the Arrowverse. To make his flamethrower, just attach a trans-orange power burst to a grapple gun and put a little orange 1×1 round stud on the side. 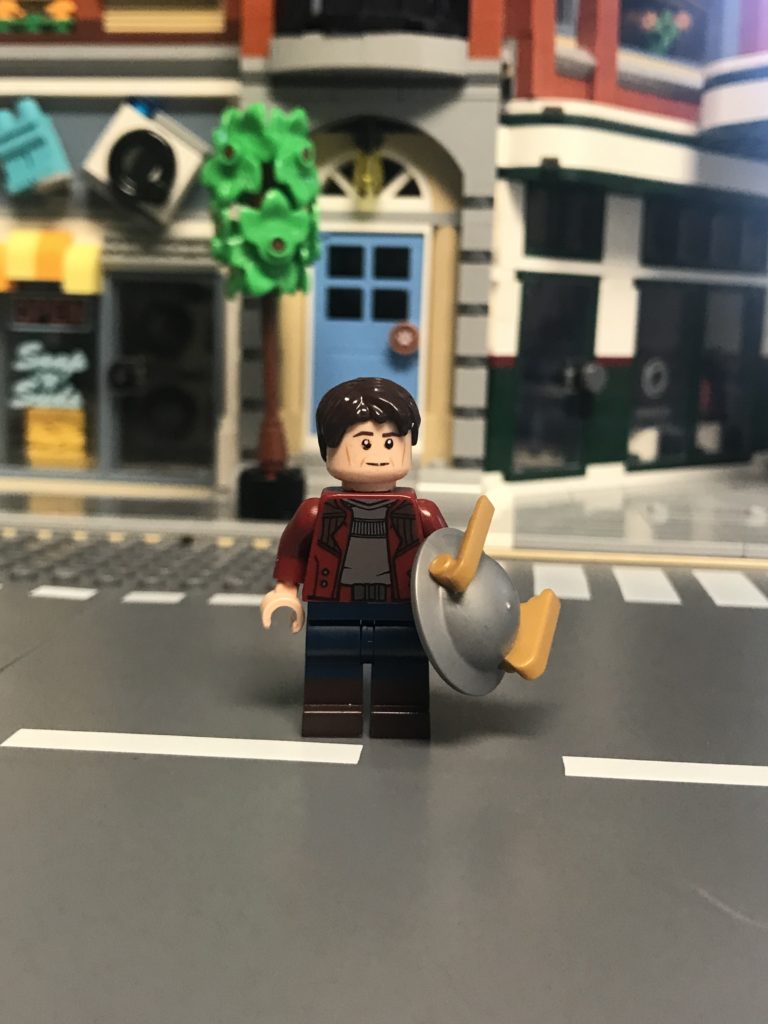 Debuting in the second season of The Flash, Jay Garrick is a more experienced speedster from Earth 3. He has become a recurring character on the show as a mentor and ally to Barry Allen. To make Garrick, you need only five parts. For the hair, use the same mold as the one from Captain Cold, only this time in dark brown. I believe his face came from a 2012 Endor Commando, but a very similar print can be found on a variety of soldiers/guards in more recent years. The torso is Star-Lord’s and can be found in 2017’s Ayesha’s Revenge and 2018’s Thanos: Ultimate Battle. The legs are made up of a dark blue and brown dual mold. And of course, you can’t have Jay Garrick without his iconic winged helmet. This can be found with the Jay Garrick from the 2020 CMF series. 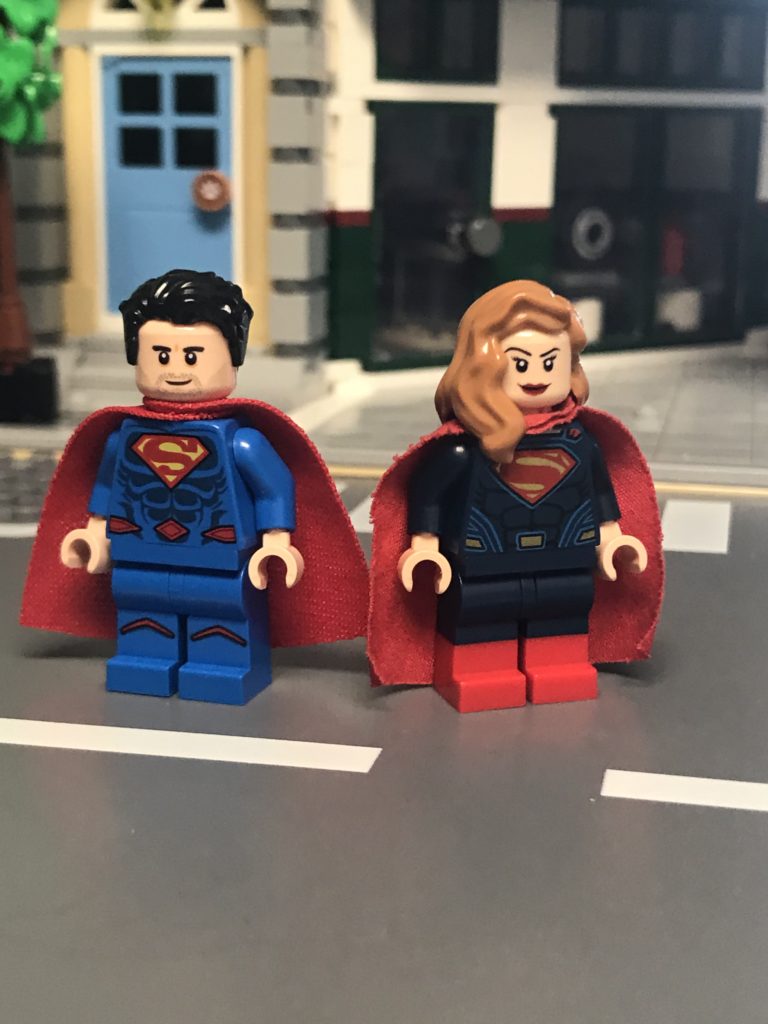 Tyler Hoechlin and Mellissa Benoist portray the Kryptonian superheroes on 2015’s Supergirl. The parts to make these two are nothing rare as it’s difficult to make an accurate Superman without the recognizable S logo. Thankfully, LEGO had plenty of Superman torsos to choose from.

To make Hoechlin’s Superman, you need only two minifigures. The Superman from 2020’s CMF series and Poe Dameron. From the CMF Superman, we used his legs, torso and cape, while we used Poe’s hair and head for the rest of the custom. You can find this combination of Poe parts in sets from both The Force Awakens, The Last Jedi, and The Rise of Skywalker. Both minifigures are pretty common at the moment.

For Supergirl, we used the 2016 dark blue Superman torso, the dual molded dark blue and red legs from DCEU Sets in that same year, Wonder Woman’s 2012 face and the medium nougat parted hair that can be found in 8 different sets. 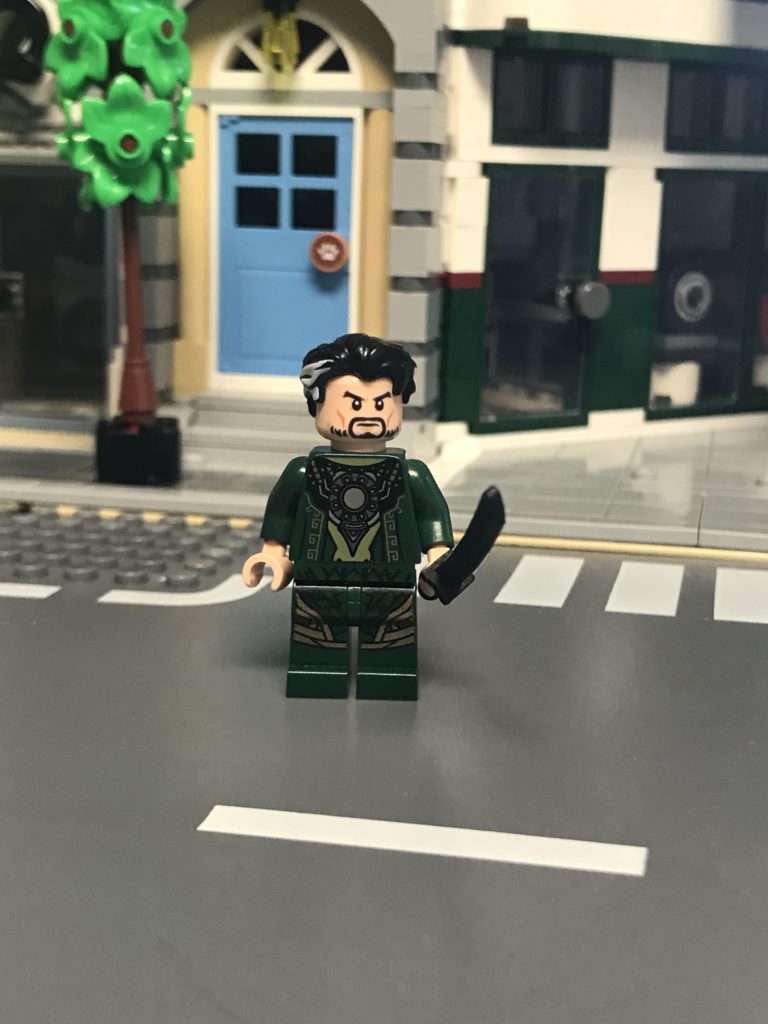 The last minifigure in our LEGO Arrowverse customs today is the head of the League of Shadows himself: Ra’s Al Ghul. To make this Arrow adversary, you’ll need parts from three to four minifigures. The hair is from Doctor Strange’s Infinity War variant. You can also use the face from that minifigure, but we chose to use Hanzo’s from Overwatch’s instead. The torso is The Mandarin’s from 2013’s Malibu Mansion Attack. Lastly, the legs are Aquaman’s from his 2017 Justice League set. As a final note, we gave him an iconic ninja weapon: the black katana.

Well, that’s all for this time! As always, let me know who you’d like to see a custom tutorial for in the comments. Until next time, Ciao!