What Will You Wish For?

The days leading up to the release of the first series of Harry Potter minifigures, speculation was rife as to what we were likely to see. While some hoped that something new and as yet unseen, others, like myself, thought the people at LEGO would stick to their usual safe little corners and produce figures which mainly had been done before. I wasn’t far wrong! Today I will be talking about my opinions on what should be included in Harry Potter CMF Series 2. 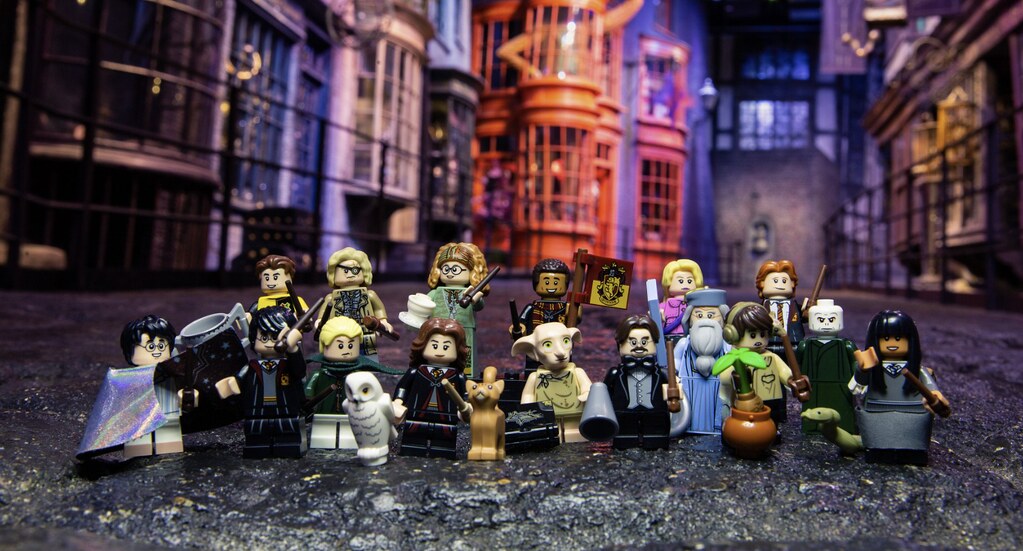 Without going into took much detail, most of these had been seen in previous sets. Even though the newer “Fantastic Beasts and Where to Find Them” series was a welcome relief, one had hoped that at least some newer figures from the last few movies would appear. The figures, however, were a vast improvement of the previous ones before. The accessories, too, seemed to compliment the figures well, the Tri-Wizard Cup being one of them.

One of the figures that stood out among the most was that of Barty Crouch JR / Mad-eye Moody. Both these are the same figure; just change a few accessories and you have both of them. 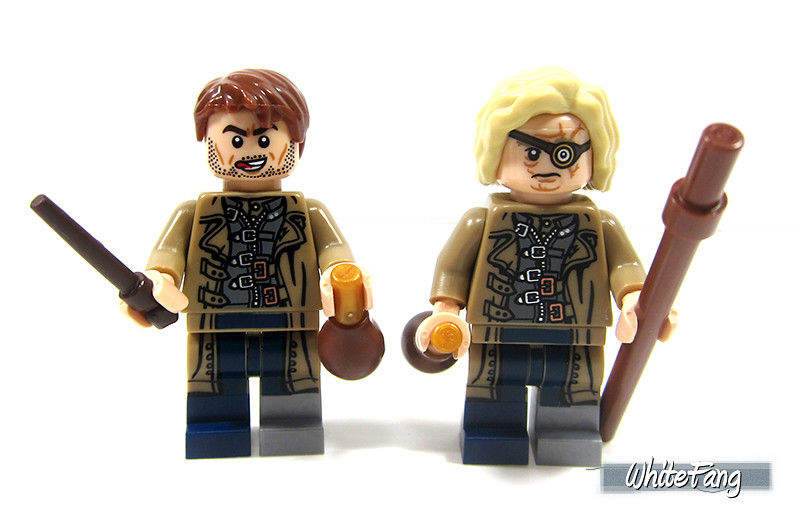 The same happened with Grindelwald & Percival Graves. Two small changes and you have two characters. A well thought out idea on the LEGO designers’ part and worthy of a mention. I made it an effort at the time of their release to try and get two of these just for that purpose, though Grindelwald was one of the rarer ones in the bag series.

Prices, too, varied as some shops sold these for as much as $6 a figure, and don’t get me started on what eBay wanted!

As for the remaining characters, it was pretty much as expected, LEGO played it safe. Yet again we got Harry, Ron & Hermione, Malfoy was in there too. Though Neville was a welcomed relief, as yet no Crabb or Goyle.

And let’s not forget the baddie Voldemort, a better edition of him this time around, along with his scaled down snake, a first, I believe? Dobby too wasn’t bad, either, though a bit tall for my liking.

Which brings me to the Fantastic Beasts figures, I thought they were excellent. The niffler was a nice touch as well, and so was the case full of cakes, which was a new design. Prints on the torsos were very good, and Credence Barebone with his witches flyer was the icing on the cake. 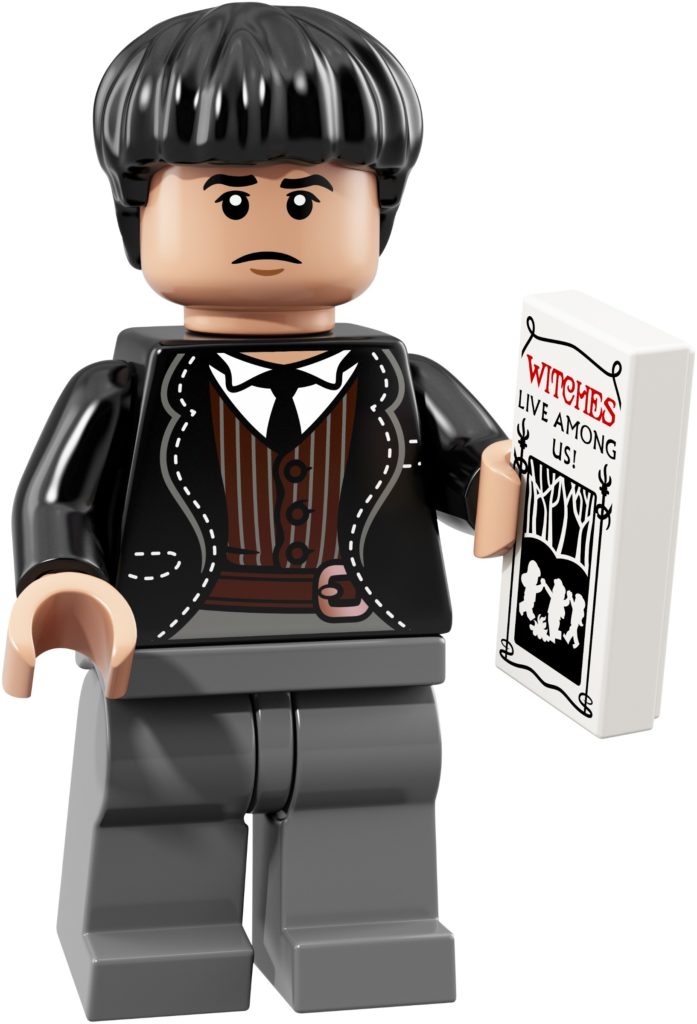 I was sorry that LEGO never thought to include an obscure though, as I’m sure they could have come up with something.

What will show up in the next series?

Which brings me now on the the series 2, which is due out in July-August according to the latest rumour mill. While, like most, I’d love to speculate on what we might see in this series, basically that’s all it is at the moment, pure speculation.

Logic tells us that given what has already been made, and what is popular once more, there is a good chance this time we’ll see it.

So if you use this as a baseline, what are you hoping to see in the 16 figures from the Harry Potter range and 6 from Fantastic Beasts?

What figures are we likely to see?

The first figure I hope to see has to be Moaning Myrtle. Quite simply, I never understood why she was left out being such a permanent character to the movies and books. I feel that LEGO let this character down big time, and even though they had already made a set that could have included her in, namely The Chamber of Secrets, they left her out.

Mind you, there is talk of a new Chamber being released in 2020, so this figure may already be in the works. But don’t rely on LEGO to do the right thing, as what we expect isn’t always what we get.

Second figure or figures on the list has the be the Dursleys, Vernon, Petunia and Dudley. Without these, life in the Harry Potter universe would be pretty dull. I’d go so far as to include aunt Marge & ripper, but I know that won’t happen.

In case you’re wondering who Aunt Marge was, she was the one Harry blew up like a balloon.

This leaves 12 more, which brings me back to one of the original characters, Professor Sprout. I feel LEGO let this character down, too. Whereas other figures have decent makeovers, this one hasn’t changed throughout the entire series in the initial release. To be honest it looks pretty bland as characters go, and given that there are new hair pieces created for Batman’s Scarecrow, I’m pretty sure the same could be done for this figure without much effort.

Next on the List would be Rita Skeeter, the all-important gossip news reporter. Again, such a great character who’s worthy of a mention. 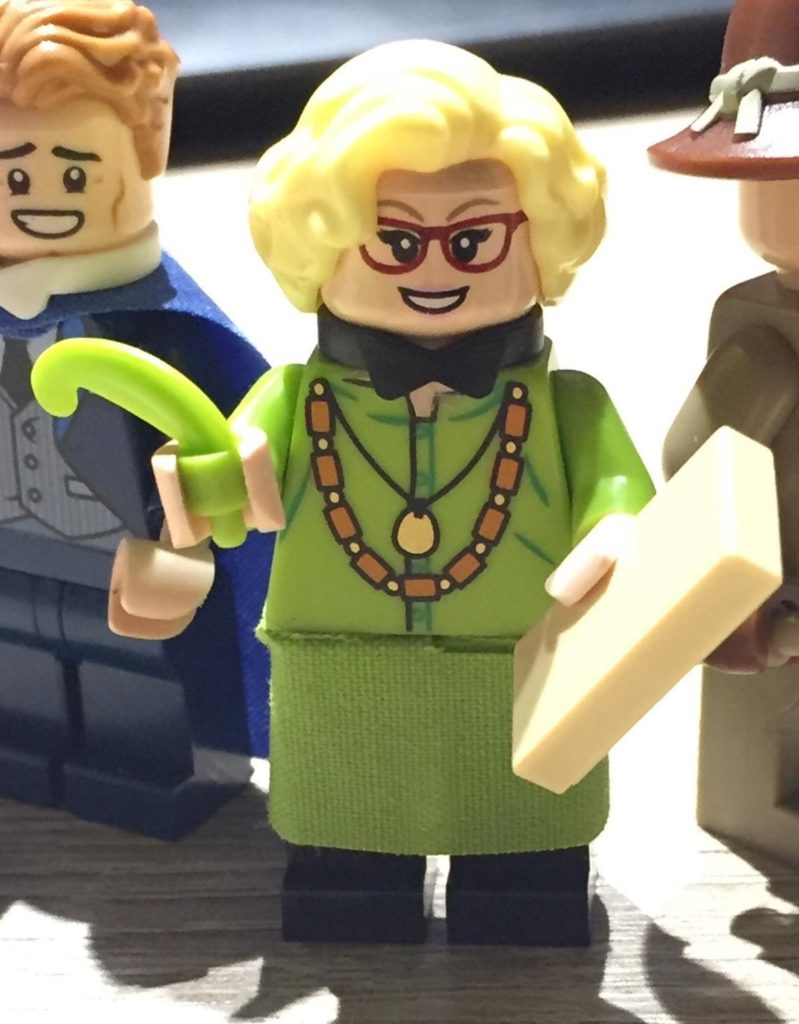 This is a custom version that someone on the web created. I think they captured the figure pretty well.

Please note: All parts for this figure can be bought at Firestar Toys, just in case you like what you see.

This is followed everyone’s favourite nurse, Madam Pomfrey. I was sure we would have seen her by now, as included in the clock tower set was the hospital wing, but it was not to be. 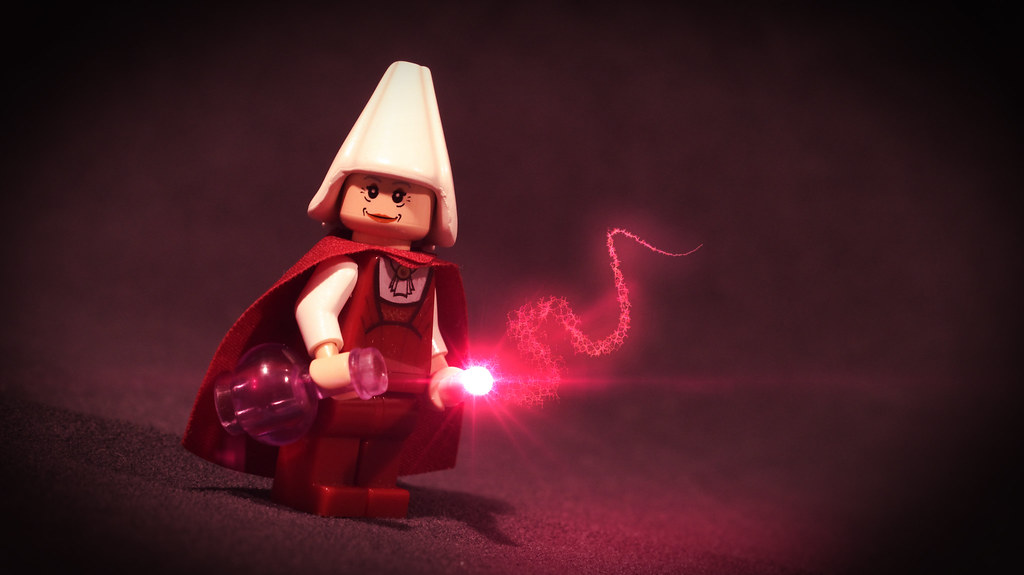 This is also someone’s idea of what this character should look like if it was produced into a minifigure, note! The old hat is a very hard part to get, for those of you willing to try and make this yourselves.

Others included on the list would have to include Tonks, with a changeable face and hair to match, as well as Lavender Brown with the famous love potion. All things are possible once LEGO decides to make it. 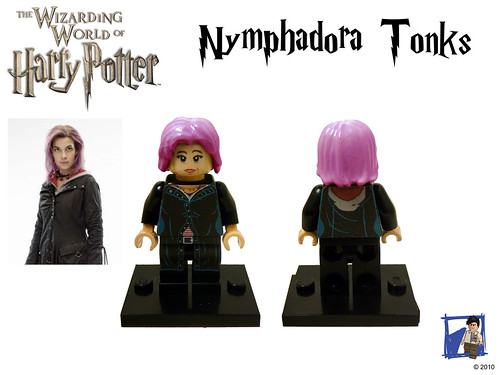 Which brings me to the all-important question, who have I left out?

One character comes to mind more than others, Kingsley Shacklebolt. This character plays an important role in the movie, but is always seen in the background and it surprises me that his character has never once made an appearance in all the sets that have been produced, perhaps this will change over the course of the coming months. Another character which could be included along with a Horcrux is Kreature, the Elf belonging to the house of Black. 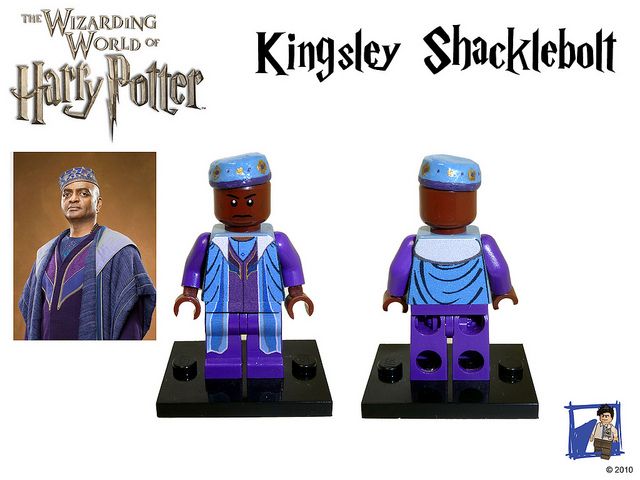 This would be a good addition to the sets as well as add to the story.

Of course we couldn’t forget Crabb & Goyle, as with changeable hair and cupcakes this would be a good way to throw in Harry & Ron without actually wanting to get them again. Hermione too could be included as suggested in recent posts as Hermione the cat, when the polyjuice potion goes wrong. Again, a great idea thrown out there, one I’d hope LEGO will consider.

This leaves two remaining out of the 16 figures and these would have to be something special, one, without a doubt has to be Bellatrix LeStrange in Azkaban prison outfit & the other Horace Slughorn in his chair disguise, while I have no idea how they would do this, I’m sure some bright spark will figure it out.

So there you have it, the 16 figures with a few noticeable absentees. I didn’t include these, as in previous sets, these figures had been made already, so it’s quite likely we’ll see these turn up in one form or another in 2020.

The figures I’m talking about are;

Umbridge, Molly, Arthur, Madam Hooch, Snape as a Boggart, Horace, Lucius, Gilderoy, Ollivander & Greyback. It will only be a matter of time before they are included into sets and given that the sets in question are the Burrow, Chamber of Secrets & Diagon Alley, I’d say the odds are pretty good.

That only leaves the six figures of the Fantastic Beasts / Crimes of Grindelwald. While I know most will say that six is not enough figures to cover this movie, it depends on what six you choose. For me Leta Lestrange has to be one of these, her character plays such a good part. The same goes for Nagini, the snake woman. While I never fully understood her reason for being there in the story and how she ended up with Voldermort, I look forward to finding out in the next installment.

As for the other 4 figures, a younger Albus & Grindelwald rank pretty good outsiders, while other slightly unknown characters such as as Yusuf Kama, Seraphina Picquery and Theseus Scamander. They may make an appearance, but it’s unlikely Credence Barebone will again. The reasoning behind this way of thinking is that the 2nd movie did not do as well as the first, though I think it had its moments and certainly enough to warrant a few more sets on this subject. As for the main Characters Newt, Queenie, Tina & Jacob, they will appear in upcoming sets. You can be sure of that, so there is no point in adding more of the same with this series.

So there you have it. My list of what I think we are likely to see. It’s a bit more out there than I liked and given that most will expect something different, I wouldn’t read too much into it, as LEGO has a habit of doing something completely different regardless what the fans want.