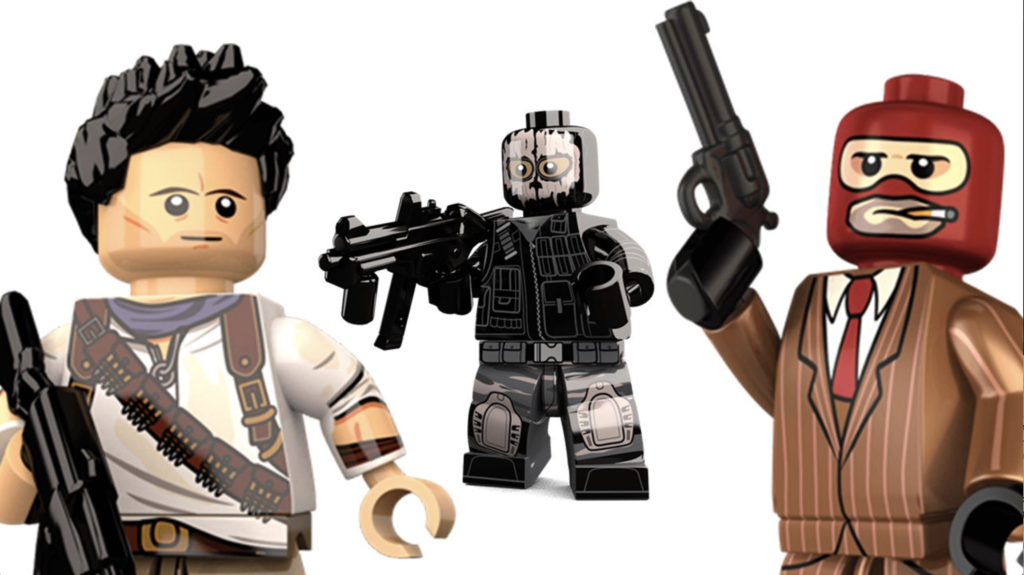 E3 2019 is just around the corner – starting on the 11th of June 2019, so today we are talking about something different – LEGO Video Games.

With such a big event around the corner, we are bound to see a ton of incredible new games announcements – many of which will spawn an assortment of different merchandise. Now I don’t know about you, but I absolutely love video games – and I am really excited to see what might be around the corner for this beloved industry.

For anyone who doesn’t know – E3 is the culmination of the year’s biggest upcoming video game releases – all showcased under one roof. All the big hitters – including Sony, Microsft and Nintendo, debut their latest and greatest projects on the show floor at E3.

So, with that in mind, I thought we’d take a moment to breakdown some of the great gaming minifigures you can buy here on minifigures.com. Where do they come from – and what kind of legacies do the franchises they represent have?

Join me as we talk LEGO Video Games – all whilst highlighting these great minifigures. 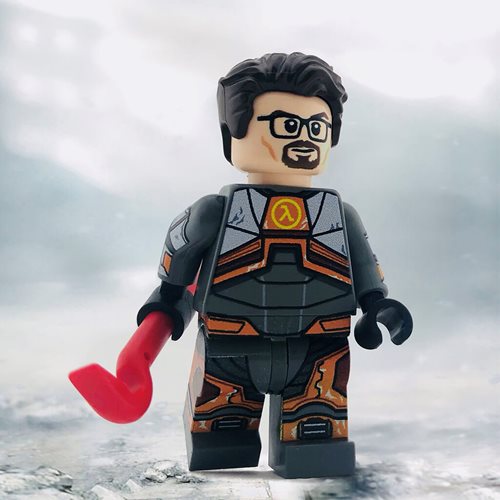 You can buy your own Gordon Freeman minifigure here.

Gordon Freeman is the main protagonist in a popular game series created by Valve. Popular particularly with PC gamers, the Half-Life series is a series which thrusts gamers into battle against an alien invasion – playing as the above-named physicist throughout the campaign. The whole game is themed around the shady organisation of Black Mesa – and whilst I have never played the series itself, I must say it sounds incredible.

Half-Life 1 released in 2001, with its sequel releasing in June of 2006. Whilst fans have been clamouring for a third title within the series to no avail – there is another way to re-immerse yourself within the world of Half-Life. Minifigures.com’s very own Gordon Freeman includes a plethora of deep and enriching details which really help to make this minifigure pop. Everything from the well-chosen hairpiece to the highly detailed printed arms here feel incredibly detailed. Combine this with what I am assured is an important in-game accessory, the crow bar, and it is saved to say that this minifigure is bound to be a hit with fans of the game series. 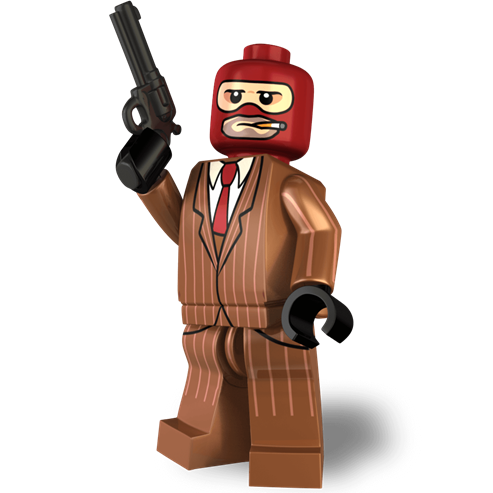 You can buy your own The Spy minifigure here.

Continuing with a look at some of the great Valve-inspired minifigures which are out there – we next have got the ever-classy, ever-elegant minifigure of ‘The Spy’. Inspired by one of Valve’s most popular videogames to date – Team Fortress Two – ‘The Spy’ is a nimble and agile character which replicates one of the soldiers which players can choose to deploy as within the videogame. Here, the spy is represented within his tightly-pressed beige suit – something which the character dons in the game to offer sharp contrast to the other, beefier characters from the game.

The spy is certainly one of the more unique characters in the game – with his outfit one of the more unique ones to appear throughout the TF2 series, so it is great seeing that unique character represented. I adore the use of the bright red colour on the balaclava  – as it makes it incredibly distinctive and really helps it to stand out. I also love the pinstripe suit here – something which would be great for other characters. And lastly, we must acknowledge the great BrickArms Magnum – completing the Spy’s iconic look with his sidearm. 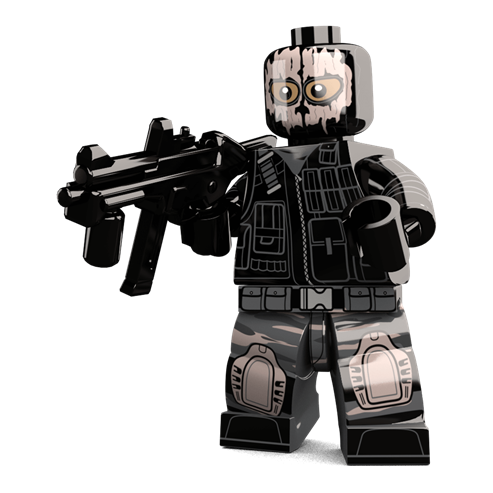 You can buy your own Ghost Soldier minifigure here.

Jumping into something a little bit grittier and more militaristic now – I wanted to look at Ghost, who is quite possibly my favourite minifigure from this website to be in my collection. I purchased this guy during Brick 2017 (I think it was 2017 – who knows how it is 2019 already!) when I met all the team on the Minifigures.com stall – and I must say, he really has stood the test of time. I love his urban camouflage detailing, his great printed tactical vest, and the additional subtle detailing which adorns his arms. That, combined with the great mask print, makes for an overall fantastic minifigure.

For anyone who wasn’t aware – Ghost is modelled off the stealthy, incredibly-secretive Ghost soldiers that form the crux of Call of Duty Ghosts. These elite operatives are the next level up from Navy SEALs and JSOC Special Forces – providing militaries with a clinical scalpel they can use to get the mission done. In the game, these guys are sleek, dark and deadly – and the minifigure here does a really good job capturing exactly that. Plus, with a few extra accessories from Firestar Toys, this minifigure really begins to fill like the elite commando which every military would benefit from.

You can buy your own Nathan Drake here, and your own Lara Croft here

Two more additions I love here are Nathan Drake and Lara Croft – great, adventurous characters from two of the biggest adventure licenses within videogame history. Nathan Drake comes from the Uncharted Series – a game series which is the holy grail of Playstation exclusives, and was one of the biggest selling points for the recent Playstation 4. Whilst I have never played this series, it looks great – and Nathan Drake himself is a fantastic minifigure. His crisp prints are great – and I love the attention to detail, especially with the extra ammunition which is intertwined with his bandolier print. All in all, this is a solid minifigure – and one which captures Nathan’s character nicely.

Lara, in comparison, comes from the newest in a line of Tomb Raider videogames – capturing her appearance from 2013’s hit Square Enix release simply titled ‘Tomb Raider’. Lara’s appearance here is spot-on to how she appears on the cover of the game – slightly beaten down, slightly injured – and far younger than we have EVER seen her before. She even comes complimented with her own bow – the weapon of choice within this game for its precision and stealthy takedown capabilities. These two adventure greats make for fantastic additions to the minifigure line-up on offer from minifigures.com when it comes to videogames – and are two I am very glad to have added to my collection over the years. 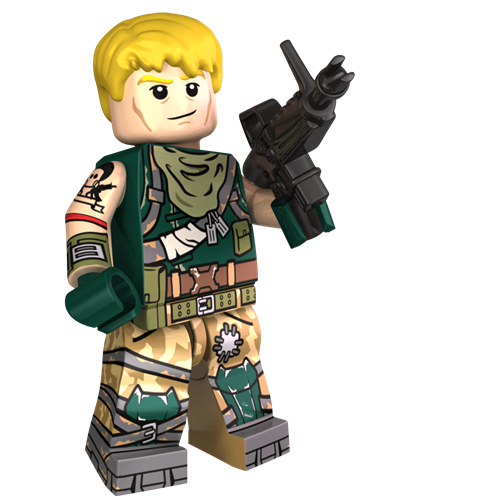 You can buy your own Jonesy Minifigure here

Lastly for today’s segment (I am aware we have skipped over some other great minifigures) – I wanted to touch on the video game character which I think will resonate with modern videogame audiences the most. I am, of course, talking about Jonesy – the confident and cocky gunner with a plethora of badass tattoos and attitude to match! Jonesy comes complete with a SI-Dan M16, wearing combat BDUs from head to toe. It makes him the perfect character to be loosely inspired by the hit videogame Fortnite.

Fortnite seems to be everywhere currently – even popping up in Avengers Endgame of all places! It makes sense for us to see some LEGO interpretations of this hit game – and I love what minifigures.com did with this character. Everything from his great tattoo detailing on his arm, to the little dog-tags which we can see hanging from his neck, go miles to add extra levels of detail to this character. Combine that with the great front and side leg printing which provides some really detailed military uniform-like legs and you have a fantastic character which captures the overall spirit of this game and this greater franchise perfectly.

So, there we have it – lots of great videogames are immortalised in LEGO format right here on minifigures.com. I know I have a TON of favourites – but now I’m passing that over to you. Do you have a favourite videogame-inspired character in your collection? And if you were to see minifigures.com add one character, who would you choose and why? For me, it would be a Halo Master Chief – making use of some of the great third-party pieces out there!

For now, thanks for reading this blog – and, as always, stay tuned for more very soon!