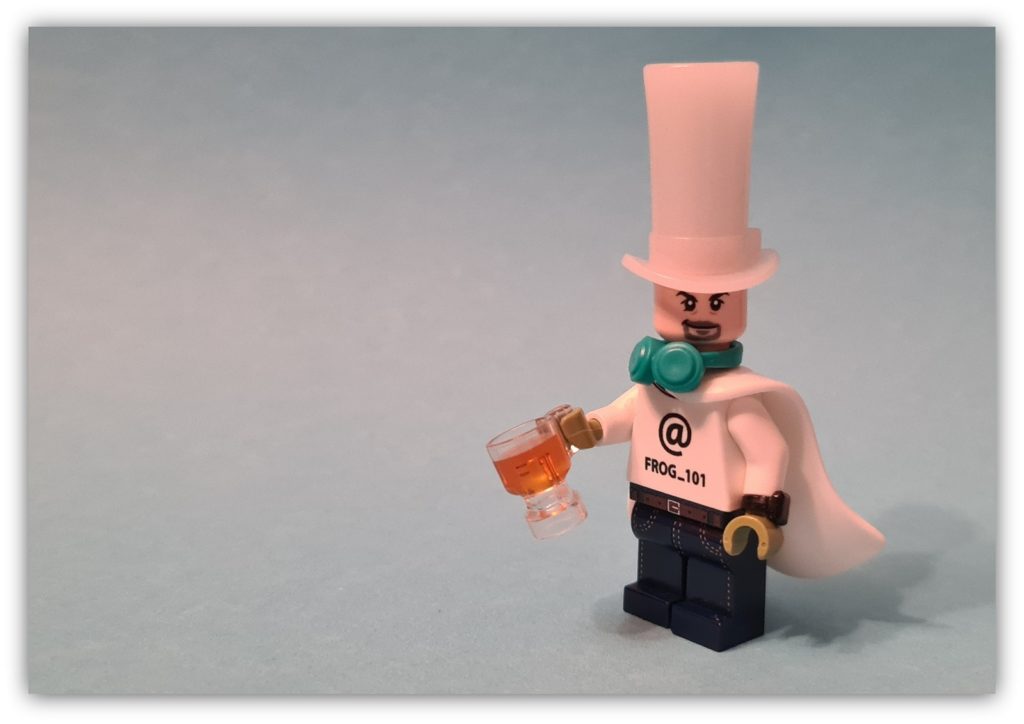 As we head into Christmas, parents and grandparents will be starting to buy presents for their families; if there are children involved there is a likelihood that this will include some form of brick-building construction toy. But not everyone has deep pockets and so the budget-conscious may decide to buy something “off-brand”. In this article, I’ll look at this very grey area of custom minifigures and ask the question “does it really matter”?

This statement was made to me as I queued to enter a LEGO exhibition a few years back; it has stuck with me ever since. It has sort of become my driver to make sure that anything I do is something that a child could do; hopefully inspiring them to think that they could do that (and better). A while back I told a friend of a custom figure that had been released; their response was that much as it was awesome and would be a great addition to their fan memorabilia collection they were concerned that their child would just see it as a toy and it would end up getting lost in the toybox. 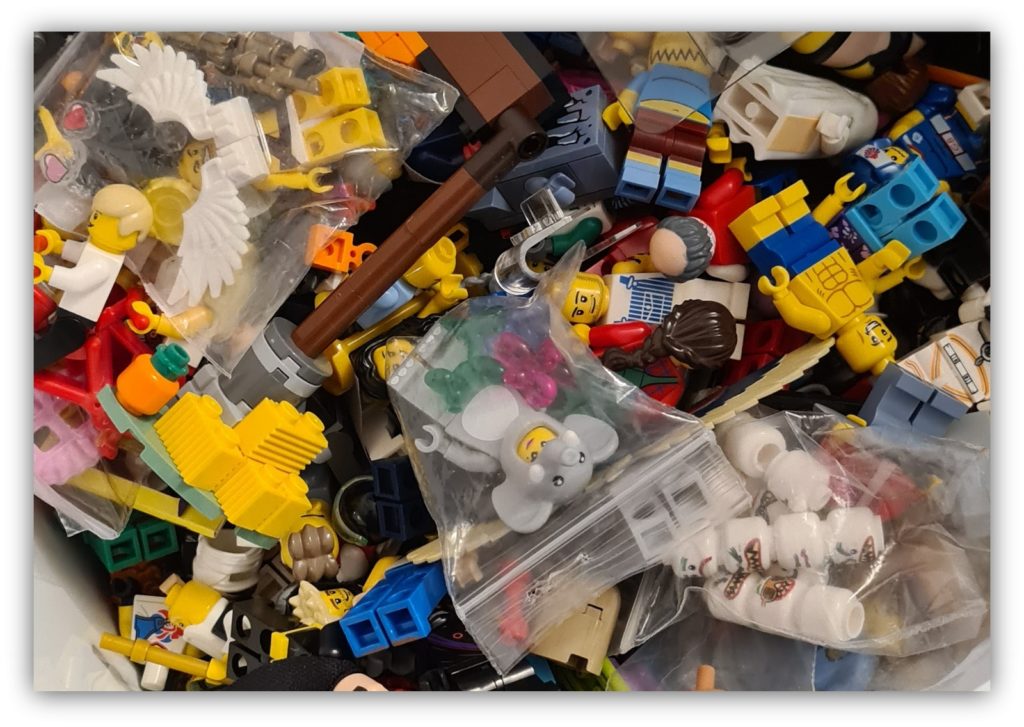 I should point out at this point, just for transparency, that I have three groups of LEGO figures in my office. There is the display only collection which is in frames and on the wall (or in a cabinet); the “frequently used” loose collection; and the “rest of them” which is a very loose collection of figures and parts. I’ve honestly lost count of how many figures I have in these boxes; I suspect it is well over 700. Oh, and there’s a box which has the figures I hurriedly put away, some of which included the LEGO bricks they were attached to. Must sort that out at some point!

There are many toy manufacturers who now legitimately create interlocking brick building construction systems and which work with other systems (that is, works with LEGO). Megablox, Character Building Toys and McFarlane Toys are three such examples. In this section, though, we’ll look at the figures that definitely do not look like LEGO figures. 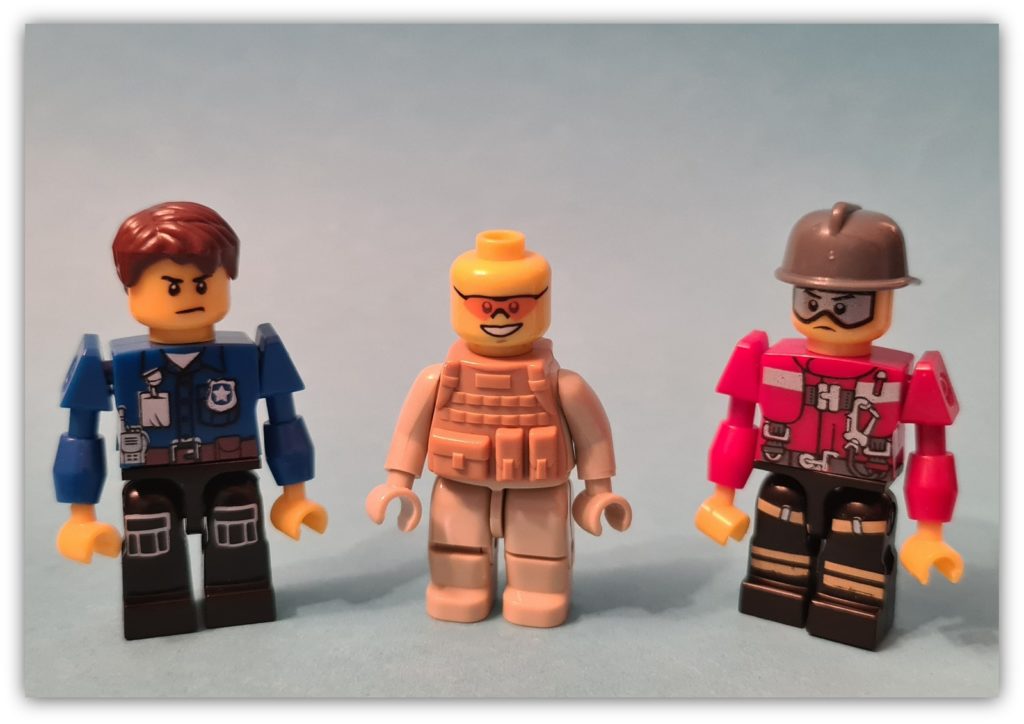 The figure on the right is “as bought”, the figure on the left now has a LEGO figure head. The figure in the middle is missing his combat hat and I’ve probably used that on another figure. All three stand about the same height of each other and about the same size of a standard LEGO figure. You’ll note that the army figure’s legs hinge at the knee. However with the exception of the head, hat and the army vest none of these parts will work with a standard figure.

Typically these (much lower cost) sets don’t have the same clutch tolerances, and the printing isn’t quite as clear or as detailed as a LEGO set. From a financial perspective, these are okay if you know that you don’t have a miniature purist and it will all just end up in one box. I think we can agree though that these won’t bring happiness to an AFOL. 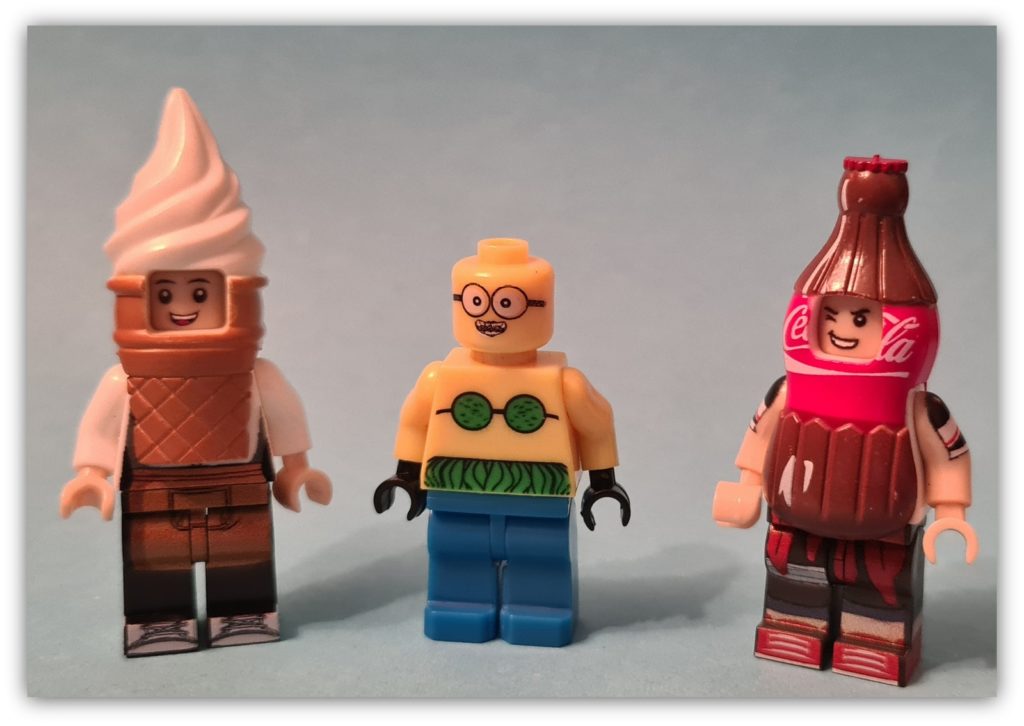 The term “fake” in regard to LEGO is an interesting one because it heads into the world of legal definition of intellectual property rights and as we noted before, there are a number of companies that can produce systems that work with LEGO, but aren’t; but the man in the street might just see it as LEGO.

The “Minion” in the above image was a cheap fake. It came as a single figure in a box that had typical LEGO style packaging. I knew it was a fake because at the time LEGO didn’t have the Minions franchise and they also didn’t sell boxed single figures. I bought it because it was such a bad figure!

The other two figures were bought on eBay. It is clear that these would pass the “man in the street” test as LEGO figures. However, they came in a clear plastic bag and I had to fit the hands into the arms and the arms into the torso; additionally the printing was really poor (as was the parts fitting together). But these two introduce us to an interesting third party world; that of custom printing. 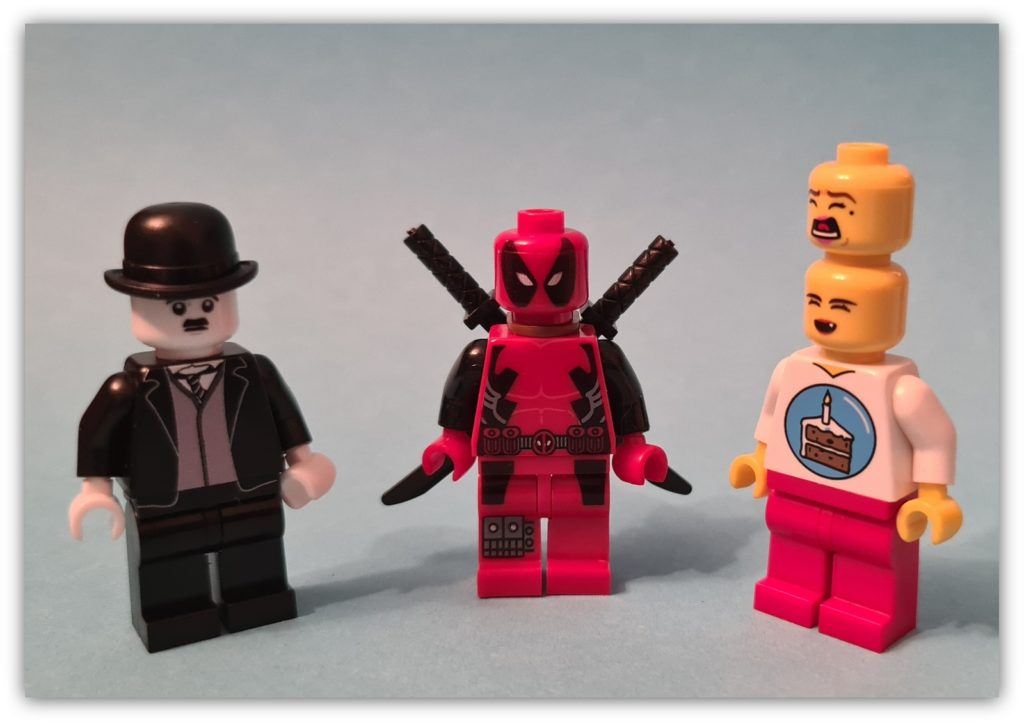 Custom printing on minifigures has become so much better in recent years, with the complexity and detail matching official LEGO minifigures. Additionally, the printing is applied to blank LEGO parts. These are much less likely to be bought as casual presents as they are often seen as very expensive. I remember when a custom printing company worked with the Scout Association to produce Scouting figures; the amount of complaints from parents feeling they were overpriced highlighted the lack of understanding of this area of the market.

However, this area of minifigure manufacturing introduces the complexity of “fake”. In 2012, LEGO released set 6866 “Wolverine’s Chopper Showdown” which featured Deadpool. This was a tie into the 2009 Marvel film, where Deadpool wasn’t as well presented as his comic book character had been drawn out. I doubt very much that the revamped Deadpool films will see a LEGO tie-in; it was after the first film release that the “Merc with the mouth” started to appear as a custom figure, making it easier to get hold of than the now discontinued set.

The world of custom printing does bring an added advantage that LEGO is only just starting to get involved with; they have introduced a “build your own” figure print stations at selected stores. However, there are a number of companies that will allow you to choose, create and print the necessary components to make your own figure. My custom figure at the top of this article is a great example of this, with all parts being purchased individually to create a unique figure. But as noted before, custom printing has become so much more detailed. I drew the artwork for the torso and leg printing for the two figures below; you can see how complex that can be. 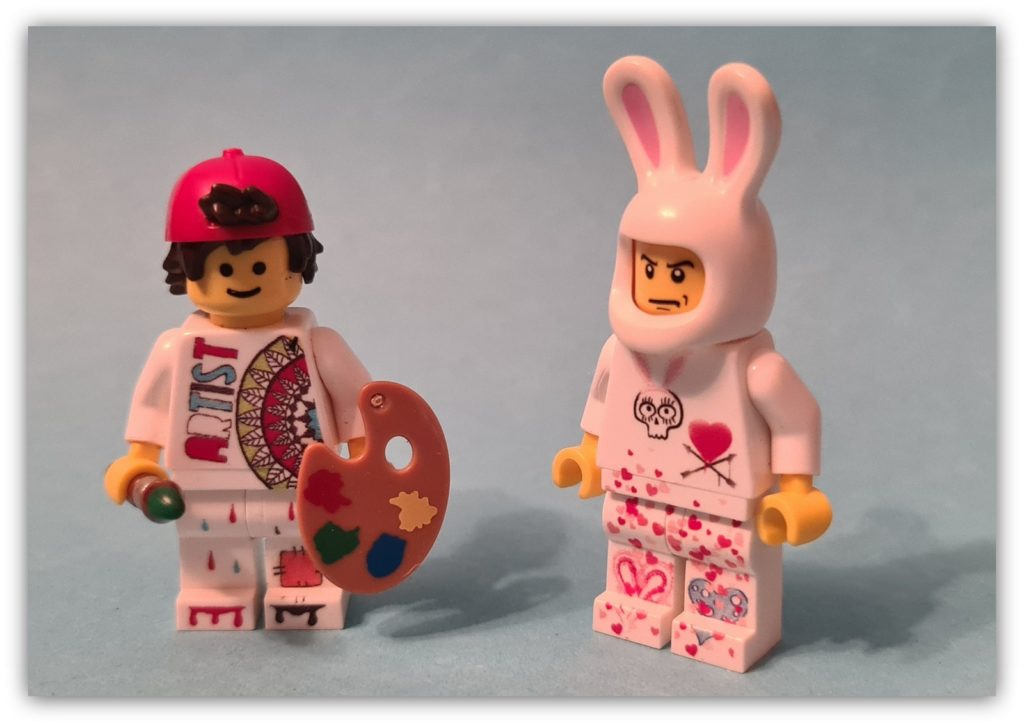 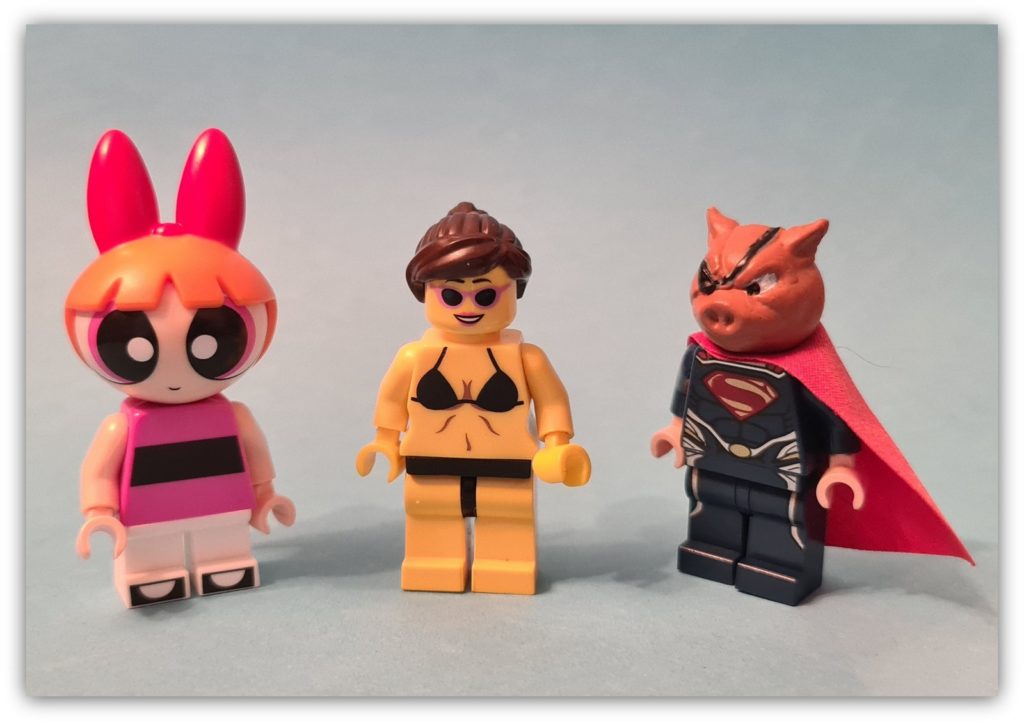 So far, all the minifigures have looked the same regarding legs, torso, head, whether it’s official, custom or fake. However, LEGO moulds have expanded to include different head shapes (the Simpsons Collectible figures featured a number of unique head moulds); the example above of the Powerpuff girl reflects this. But custom manufacturers are also getting hold of injection moulding solutions; the torso in the middle figure, and the pig head on the figure on the right shows how these can be created and sold in reasonable quantities, relatively inexpensively. Additionally, there are companies now that will create a 3D likeness of your head if you supply them with two photographs that they can work with.

So, does it matter if it’s fake?

There is a lot of cost to starting up a new LEGO theme; time spent in design, mock ups, cost of creating the moulds as well as marketing. All that needs to be recouped for a company to remain viable; which is why it is so impactful when another company produces something that is the same, but has bypassed all the upfront work and costs and sells at a lower price point. I think we can all agree that this is the one instance when it does matter if it’s fake.

But there are areas that make this less black and white. Quite often there may be one figure, or one accessory in the set that I can see a use for. But the rest of the set doesn’t interest me; so I have to make the decision whether I buy the full price set (which is often in excess of £30) for a single part or figure which I could buy from a custom maker/reseller for a fifth of that cost.

Another point is that the custom maker/printer can produce characters and figures that the “official” companies would entertain. We won’t see a Mad Max theme anytime soon for example; and Charlie Chaplin is unlikely to suddenly get a child/family audience clamouring for a figure.

And as I said before, for some people it may be that the budget of buying the proper set is too prohibitive for the long term play potential; or even for the person’s own bank balance.

I think the summary for this is straightforward; if you know that the thing you are buying is obviously a cheap copy of a full set of something that is currently available, then it’s a probably fake and you should avoid it. LEGO don’t sell single figures from sets (they only release as part of Collectible Minifigures, or in specially created variants for shows like the San Diego Comic Con). If you’re not sure, check sites like Bricklink or Brickset.