This year the Dark Knight celebrates his 80th birthday – I guess time really flies when you’re fighting crime! I think it’s high time we showed some love to DC characters, and who is better than Batman to start with? So here I am, ready to tell you about all the LEGO Batman minifigures! Okay, maybe not ALL of them, since there are more than 50, but a select few.

Meanwhile his human counterpart has been around for much longer and has made appearances in TV series, films, animations, video games and countless of comics (he is also more humble). The designers over at LEGO had more than enough material to base him on, as well as the chance to create some variety.

Disclaimer: While I am a huge fan of Batman, after the LEGO Movie and this video, I find it hard to take him seriously from time to time. No disrespect meant.

Batman through the years

The LEGO Batman Movie may have brought us two Batman CMF series and figures with unique costumes, but there were already more than 20 different Batman minifigures preceding them, referencing different films and comics. Of course even with 50+ minifigures, it’s not possible to re-create each and every version. Some, like the Batman’s first appearance from 1939, does not exist in physical form. Instead it comes with the 75 Years Anniversary expansion pack for LEGO Batman 3: Beyond Gotham video game. It seems even when he doesn’t have a minifigure, he has a minifigure.

Images from History Today and Life in Brick

The oldest LEGO Batman we have in physical form is the one Adam West played in 1966-1968 TV series. Personally, I think it’s a pretty good interpretation of the character. The white “eyebrows” and “nose” on the cowl, the short ears, and the specific coloring of the costume makes a great combination, and would remind every Batman fan of Adam West’s Batman. Back then, Batman was not as fit as he is today, and the detailing on the minifigure portrays that physique really well. 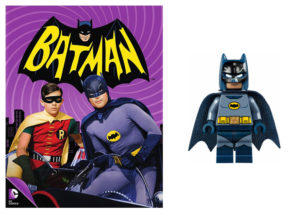 Michael Keaton’s Batman from 1989 also made an appearance as a minifigure. At first it was a San Diego Comic Con exclusive, but a year later, in 2006, it was included it regular sets so us mortals could get our hands on it as well. 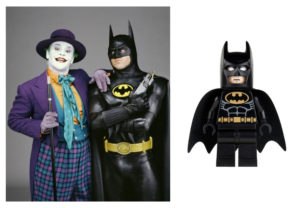 Then there was Christian Bale’s Batman from the Dark Knight Trilogy (2005, 2008, 2012). There are at least two variations of the minifigure, but I think the one below depicts the character better (not to mention he looks more handsome all dressed in black!) 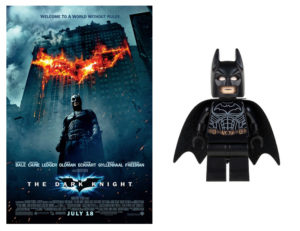 And finally, we have Ben Affleck’s Batman from Batman v Superman: Dawn of Justice and Justice League (2016-2017). Again, there are variations including a regular suit, a tactical suit, an armored suit, and a Knightmare Batman. 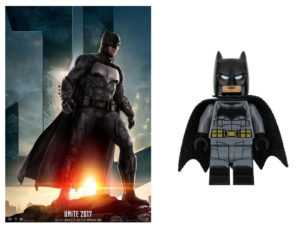 As you can see, Batman changed a lot throughout the years, and so did his minifigure. The color and the shape of the cowl, as well as the Batman logo are all different in the above mentioned figures. The costumes are designed to reflect the on-screen appearance of the character, which, in my opinion, is done very successfully.

Let me just quickly say that the minifigures were not released in the order of the films. In fact, the first ever Batman minifigure was based more on his appearance in comics (if you don’t count the one from SDCC).

And then HE came along…

The Lego Movie showed us a whole different Batman. Cocky, obsessed with himself, and of course, very much into black. He was the opposite of the real Batman in every way, and yet he was the perfect example of an imperfect Batman. 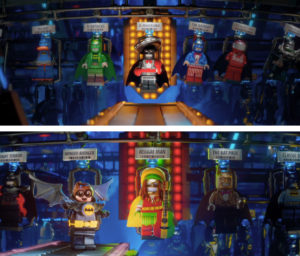 Images from the LEGO Batman Movie

Suddenly, our Bat-wardrobe was filled with so much color. He really did have a costume, excuse me, a suit for every occasion, every culture, and every time period. He even sparkled from time to time! 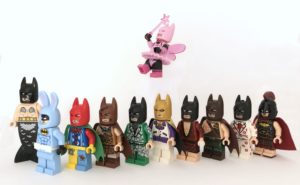 Image from my collection 🙂

Before these guys came along, the only bright colored Batman minifigure was the Batman of Zurr-En-Arrh, and it was a SDCC exclusive. Apart from the black, gray and white variations, we had a classic suit Batman in blue or dark blue along with a Batman with a wetsuit which was also dark blue. And the only version of Batman who wasn’t what we used to know was the Pirate Batman, who, I believe, was a reference to his appearance from the animation LEGO DC Comics Super Heroes: Justice League – Cosmic Clash.

And of course, let’s not forget the custom-made ones. As with every well-known hero, the fans and custom minifigure companies alike made different versions of Batman. Some were good, some, not so much, and some were downright impossible. I mean, a Hydra Batman?? Still, LEGO is all about mix-and-match, so why not? Besides, the detailing looks incredible, even in the picture.

There are so many of these to mention here, so I’ve picked several from around the web. 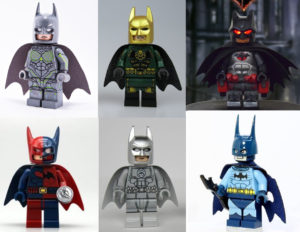 A while ago, I mentioned six upcoming sets for the 80th anniversary. The release date was August, which, during this time, seems to have been moved up.

Personally, I’m very, very disappointed in these Batman minifigures. The ones from the Juniors sets look exactly like the Batman from the LEGO Movie and previously released Juniors sets. The others look new, but with a very close resemblance of the Batman figures from sets 76116 and 76117, released earlier this year. Even if this wasn’t the case, I think both Batman and his fans deserved better than to have the same figure in all the anniversary sets. A kid may not care how Batman looks like as long as it’s Batman. It’s the adults that are harder to please, and who look at every little detail in a figure.

The anniversary figures are poorly thought at their best. At this point, my only hope is that LEGO is planning to release another batch in August, which will be the real 80th anniversary sets. 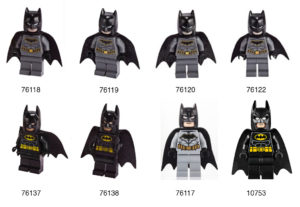 I’m sorry LEGO, but Batman deserves better, and so do we.

Once again, we have come to the end of yet another article. So tell me, which is your favorite Batman minifigure? Do you like the comics versions – which we didn’t talk about much here – or the movie versions? Do you have favorite custom Batman? And most importantly, what are your opinions on the anniversary sets?

Let me know in the comments, and see you in another article!

Don’t forget to check out this awesome MOC by TDBricks featuring the newest Batmobile in the upcoming Batman movie, too!

And one more thing… the guys over at Brickipedia did an incredibly extensive page about all the LEGO Batman figures. It’s definitely worth taking a look!

All the (LEGO) President’s men