For some friends Of LEGO, any figure made for an interlocking brick toy that isn’t LEGO is “fake” and therefore not worthy of any further comments. Whilst some toy figures have been made as copies of existing figures, I don’t believe the world is as black and white as that. In this article, I’ll look at the world of Non-LEGO LEGO figures. 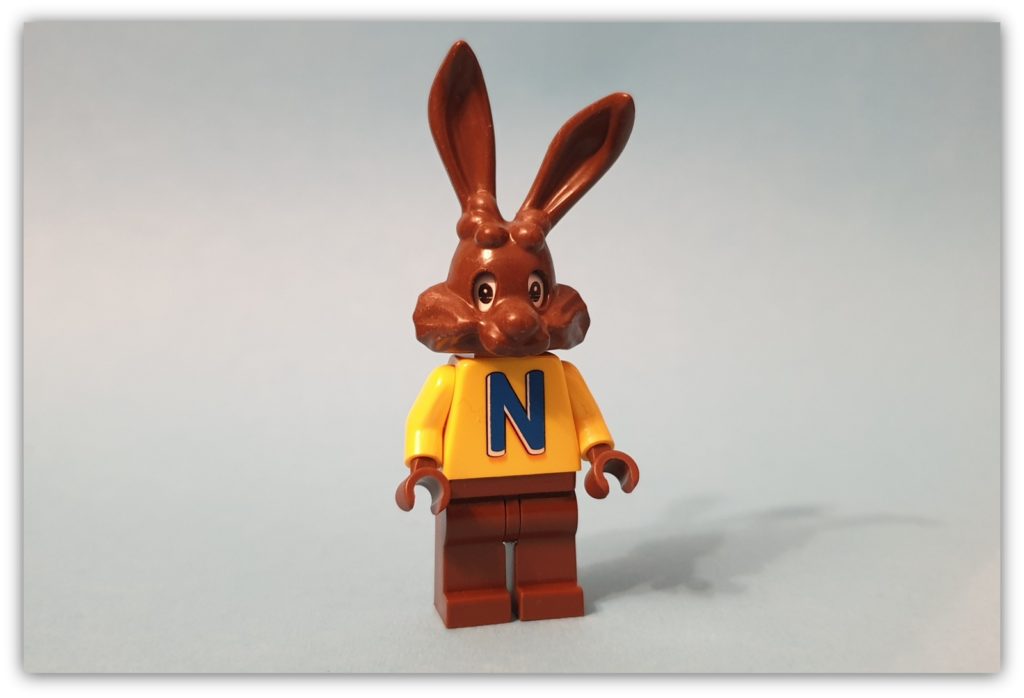 Years ago, a friend told me about a bag of LEGO at a local charity shop. They’d spotted it and asked the charity shop people to pop it behind the counter for me. I went and bought this huge bag of assorted toys. Once home, I sifted through it, removing all the parts and pieces I would not be interested in (DUPLO). Amongst the pile was the above figure. I very nearly put it into the “back to the charity shop” pile when my wife stopped me. I had almost discarded what is now my most collectible (and valuable) figure in my collection. That figure was Quicky, the Nesquik Bunny, currently available through Bricklink for about £30 GBP.

Finding how much it’s worth

I mention this as a start as sites such as Brickowl, Bricklink and Brickset are invaluable for establishing if a figure is a “real” one or not, and also how valuable they may be. These websites are useful for those figures that are sold on secondary markets and marked exclusive or rare. I bought a “rare” weird figure at a seaside collectible and trinket shop on a whim, only to discover later that I’d paid about twice as much as I needed to. Now I have a story about this figure, so I’m not too disheartened. Also, I had to put my detecting hat on to work out what it was by starting at the component level of the leg piece! 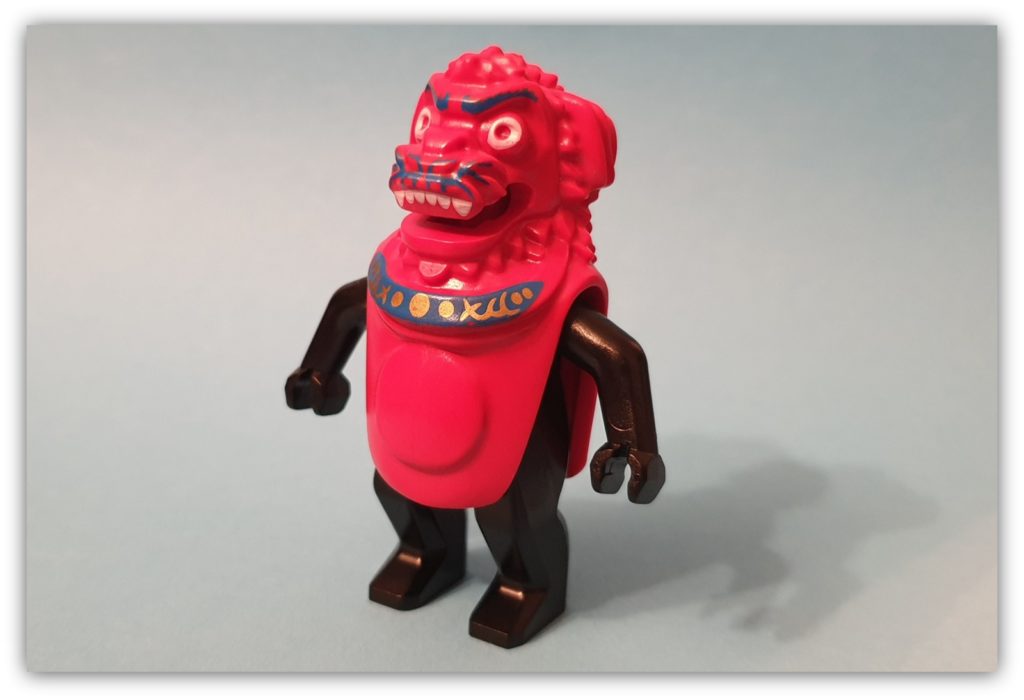 When the original isn’t available

Whilst these two examples are of actual LEGO figures, they do introduce this article quite well. You see, with the San Diego Comic Con recently passed, LEGO released a limited number of exclusive SDCC figures. If you’re a collector of a theme, you might not have been able to get to the USA and so would be reliant on the very expensive secondary market; but you could turn to the alternative non-LEGO figures. 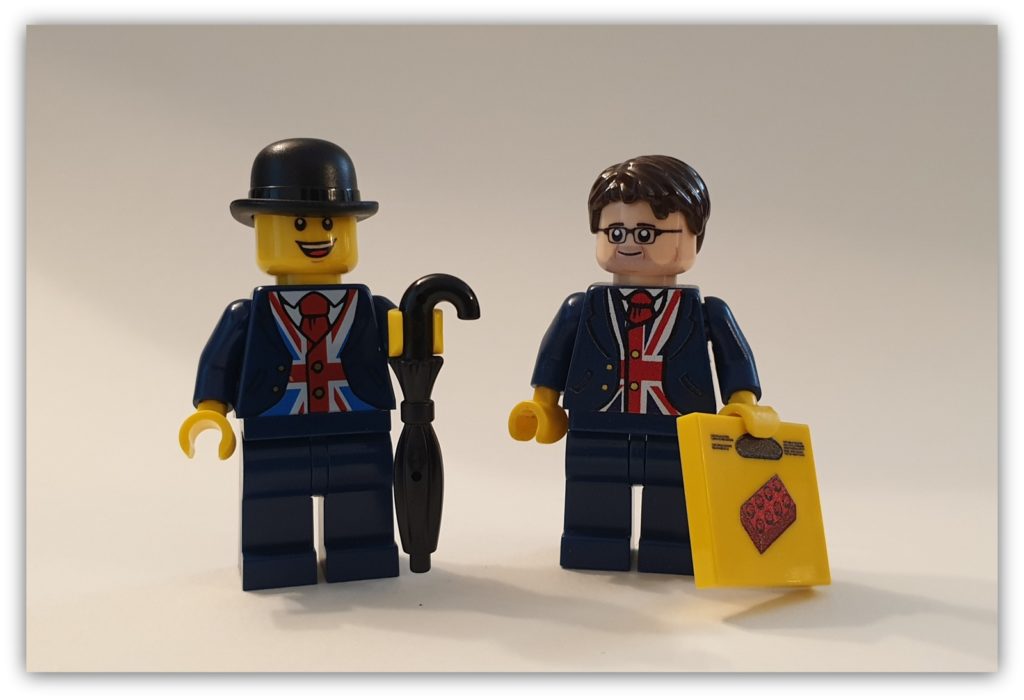 When LEGO opened its flagship London store in Leicester Square, there was mention of a special figure for the opening; a figure called Lester. The company Brick Sanity had pre-released a custom printed figure that they had called Chester which I ordered and was able to take with me to the opening. This turned out to be an excellent choice as LEGO had decided upon a limited release based on scratch card lottery; my luck was as expected, and I didn’t get the figure. Before I had left the shop, these figures were already on the aftermarket for massive amounts of money. About a year later LEGO released Lester in a polybag rather than blister pack format. For me though, my Chester was there from the outset. If it hadn’t been for Brick Sanity, I would have had to wait for ages to get a figure with that waistcoat!

One of the largest “challenges” that face a large company like LEGO is that of the intellectual property rights; which smaller companies can bypass completely. Two examples that I have (in varying quality) is a Hello Kitty and a Minion. I bought The Minion in a little newsagent whilst on holiday in Cyprus. It was sold in a box with official-looking printing on the outside. This interested me as I knew LEGO didn’t box figures but also MegaBloks had the licensing rights to Minions at the time. This figure is also the first obviously poor-quality LEGO figure I had bought. If you can’t guess, the “fake” minion is on the left, the Megabloks version is on the right. 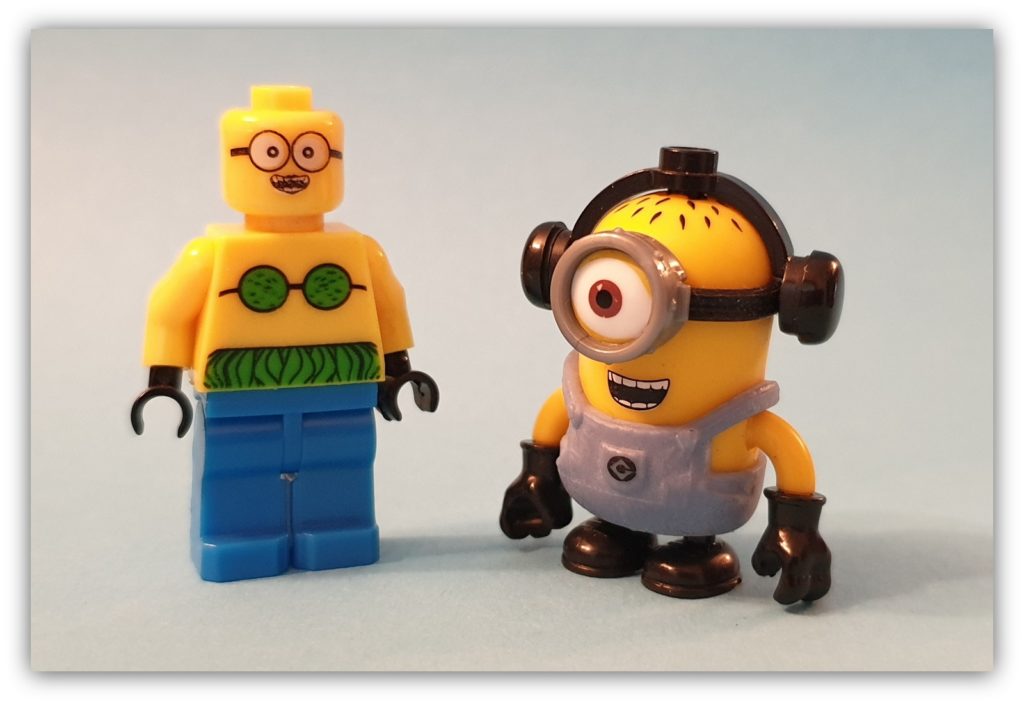 The Hello Kitty has a much better head, but there’s still something not quite right. I did cheat with the Hello Kitty on the left; I cut the head from a Megabloks toy and found it fitted onto a standard LEGO torso; the figure on the right is all “fake”. 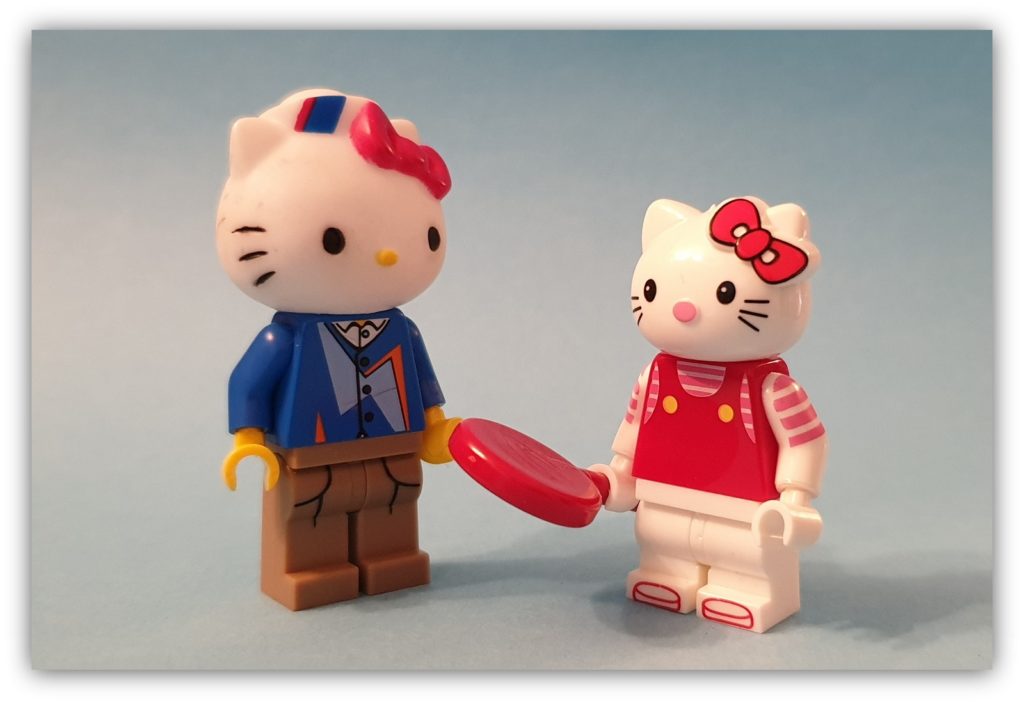 With custom printing becoming more common place, what is and isn’t LEGO has become a lot more blurred, especially as the quality of the printing has improved so very much. The examples below are two custom printed heads (and a whole head mould) from Citizen Brick. The printing for the two faces on the right is onto genuine LEGO parts; so it could be argued that they are genuine LEGO! 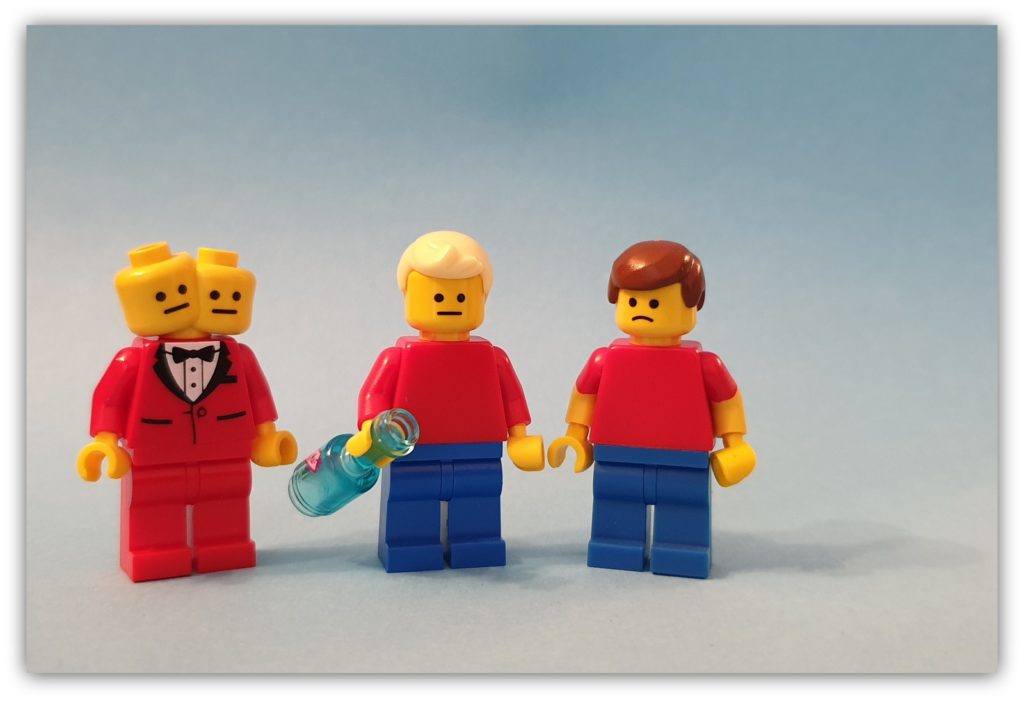 But it’s not always cheaper

If you’ve ever been in a LEGO shop, you will have seen the build a minifigure station, where you can create your own figures from the parts and accessories that are available to you; and companies such as Firestar Toys will allow you to do the same and more as they also source the parts and accessories from custom printing companies (as well as producing their own). A fitting example of this is my latest summer mini-me, shown below. I bought the parts individually; the head and hair pieces are the only standard LEGO parts. The shirt and trousers are custom printed. SI-DAN custom created the watch. 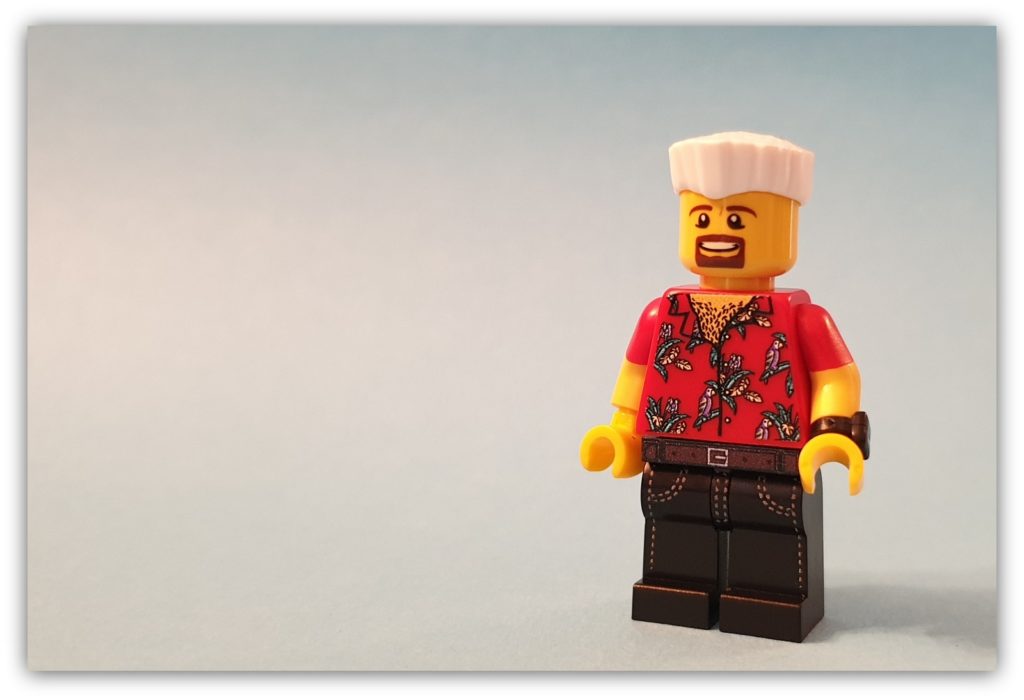 One of the arguments levied against the non-LEGO figures is their cost, which is an interesting discussion. If we use a Collectible Minifigure (CMF) as our baseline cost for a LEGO figure, then we can say that a figure will cost about £3 GBP each. The Build-a-Minifigure works out at about £2 per figure. However, a custom figure such as my mini-me will cost £10 GBP upwards depending on what parts you choose and whether there are shipping charges.

If you’re buying these figures for children, then that cost may seem steep especially if you are of the opinion that LEGO is only for children, forgetting that LEGO will make thousands of figures, where the custom companies will be printing to order in much smaller batch numbers. For that reason, you may elect to go through an alternate route such as the Chinese cheap figure. Also by purchasing the cheaper option won’t be so bothered if the figure gets lost in the sand pit. As the saying goes, you pay your money and you take your choice. 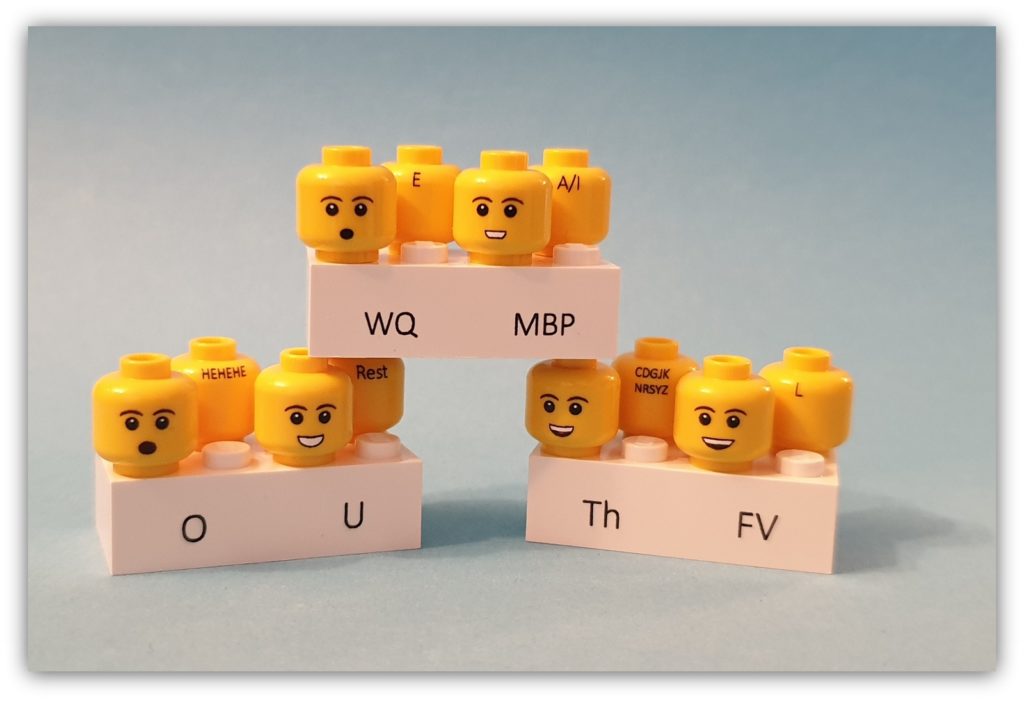 In my opinion though once you have started to look at custom parts and custom figures you are moving away from just playing with LEGO as children to something perhaps a little more adult (I’m loath to say grown up!). I recently bought a set of heads which have slightly different mouth shapes; the intention is that when I find time to do some stop motion animation, I can make my figure talk!

There is another route for non-LEGO figures and parts; that of the printing yourself 3-D printing solution. I wanted to create a LEGO version of the Rocketeer; a comic hero that I had discovered and spent quite a while searching out and buying the graphic novels and comics as I enjoyed the stories and drawing style. I ended up creating two figures. The first was created from parts that I had in my collection already (and which I painted where required) the second was created using parts that I had made to order through Shapeways and custom pieces that I bought online to complete the outfit; I’m not sure now which one is better (so I display both!) 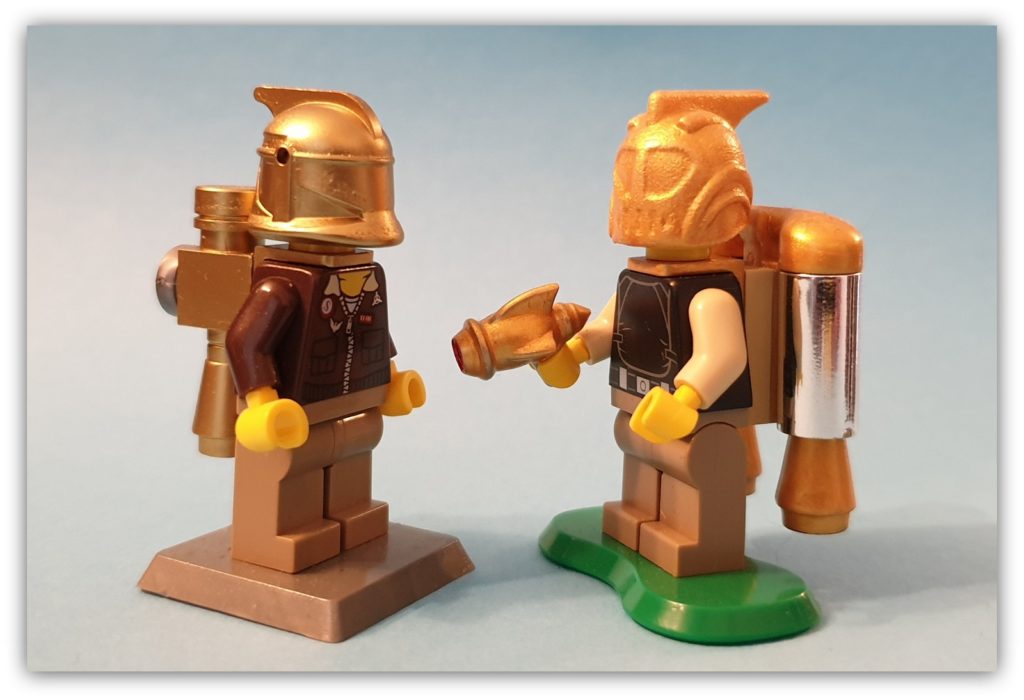 You can also create your own custom figures by printing the design onto paper (or painting directly onto the figure). When LEGO first released the minifigure, they used printing onto stickers on their torsos, so it isn’t such a cheat solution!

I’ve talked about various sources of non-LEGO figures in this article. I’ve looked at the cheap Chinese market, custom printing and custom creations. Depending on how it will be used or who will use it each option offers benefits and disadvantages. It also depends on whether you are buying to play or display your figure. I have some minifigures which I know aren’t genuine because to buy the original will either cost an amount that I can’t justify or would require me to buy the LEGO set that the figure comes in which is also a huge outlay.

So, what’s your view on the non-LEGO market? Which non-LEGO figures do you have?