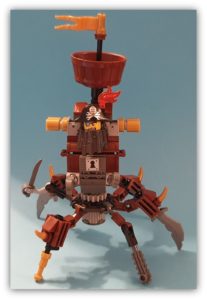 One of my Christmas presents this year was “Battle Ready Batman and MetalBeard” (set number 70836). Okay, so I had bought it for myself just before Christmas; and okay it was totally on the strength of one part (the 2×4 tile that says “You’re Welcome”) but that’s not the point. As an aside, this set is totally awesome as it contained no stickers!

Anyway, as I was building MetalBeard I started to think about minifigures and whether or not MetalBeard should be thought of as a figure, given that he doesn’t have a standard figure set up; mainly in the legs. As I looked around my office/studio/playroom (depending on who you are and your opinion of toys) I realised that this isn’t such an unusual thought. 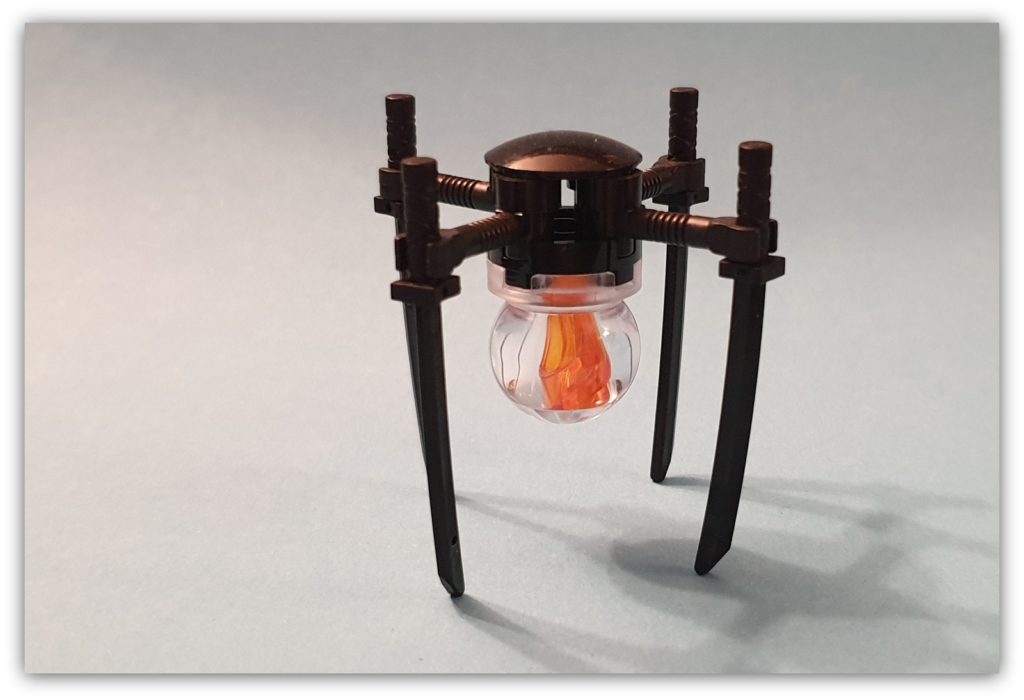 Unsurprisingly perhaps, we start with the Star Wars franchise. This monk is considered to be a minifigure in the collection, with the one above released in 2013, even though it is a wholly parts construction (samurai swords for legs) and has no moveable parts. Should it be thought of as a minifigure? Much as I would have thought not, it does open the discussion as two what a minifigure is, especially in the Star Wars franchise. 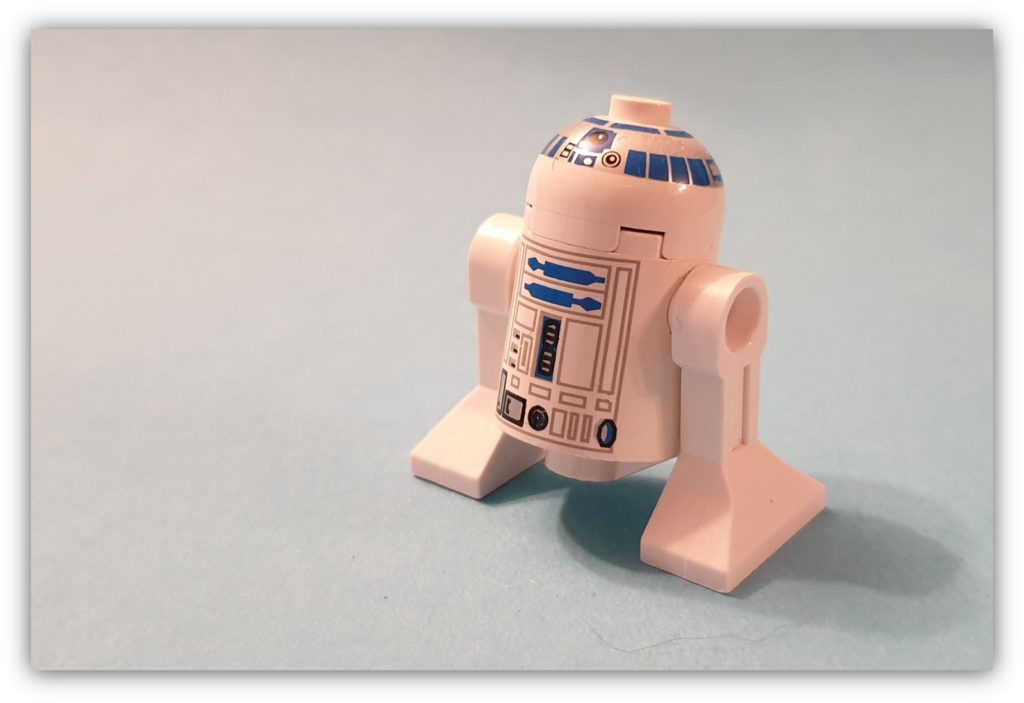 Again, this is where the discussion of what is and isn’t a minifigure continues. There have been many variants of R2D2 units (including other figures like the R2-Q5, which to my eye is an R2D2 painted black), including Christmas variants, so it would seem that LEGO consider them to be figures. I’ve included the figure here because the “legs” are not what we might call standard. 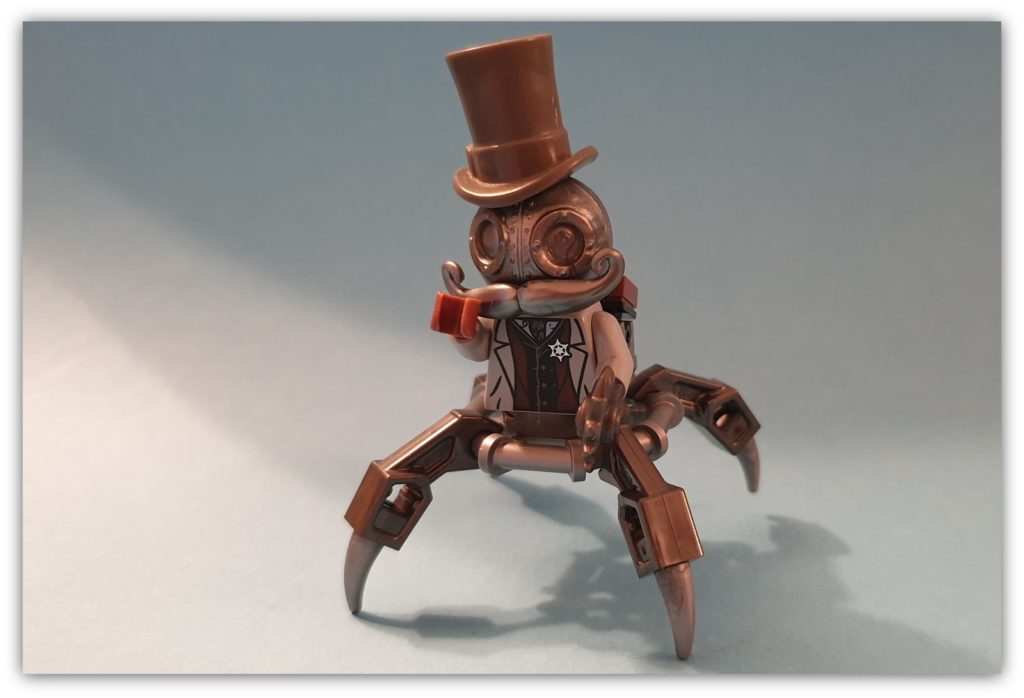 I’ve had this figure in my collection for quite a while. A collaboration between Guy Himber (Crazy Bricks) and Doktor A, this figure combines the steampunk aesthetic with both LEGO and custom moulding. I love this figure, even though I have yet to really take it anywhere and photograph! But check out the not-legs; sort of spider-like but somehow mechanical!

In these first examples, I’ve probably cheated a little by introducing robotics into the article. But of course, LEGO hasn’t just had standard minifigure legs! 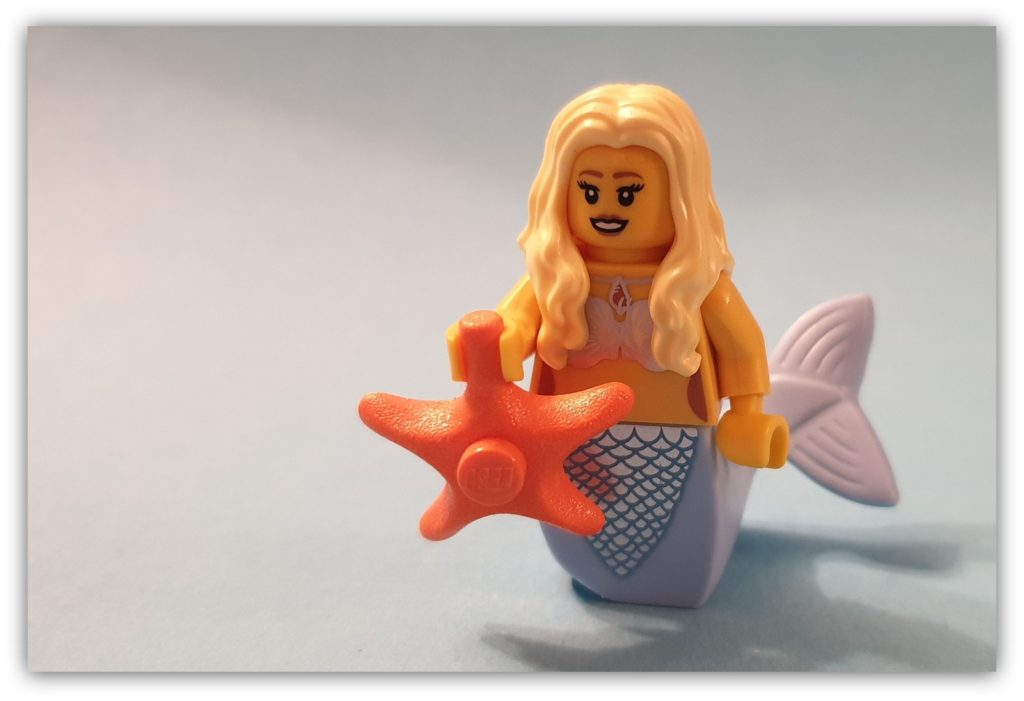 Whilst I’ll move away from the world of robotics, I’ll stay in the land of fantasy… or should that be fanta-sea with the mermaid’s tail? LEGO produced two types of fish bottom (not sure what else to call it!); the type we see in the image above and a more rigid up-down style. I do prefer this one if only because it offers a softer shape to the figure. The length of this part means the figures are about the same height as a standard minifigure (the straighter version means the figures are taller). 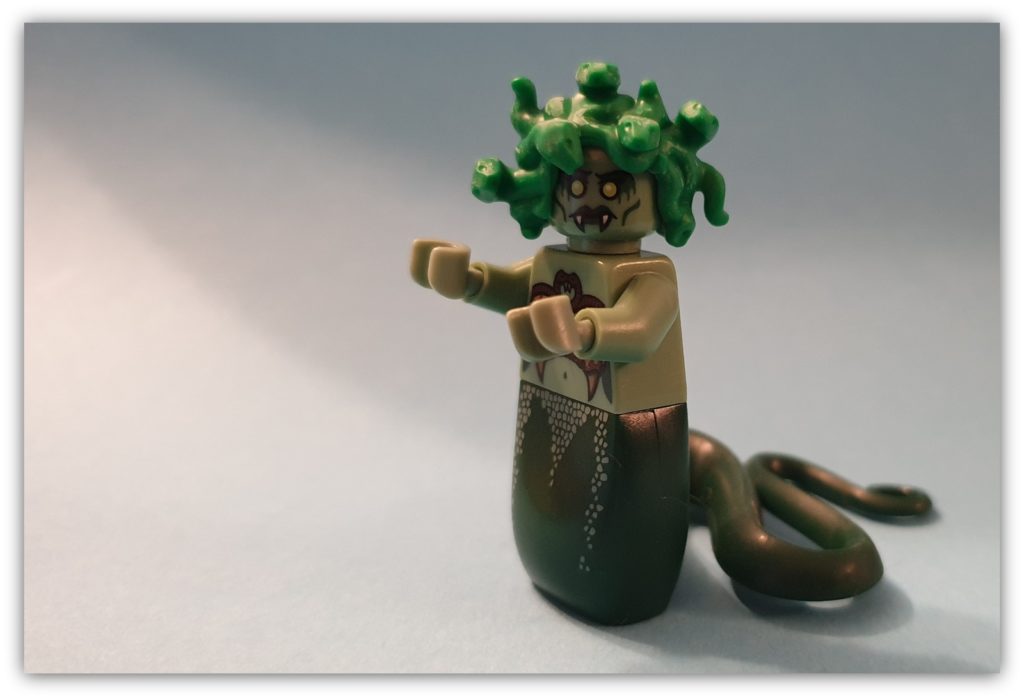 From fish to snake as we go to the Gorgon. Even with the snake-headed figures in Ninjago, I don’t believe that this part has ever been used for anything other than this figure (but if you are aware of another figure please let me know). Whilst this figure takes up a lot more space than the usual figures, or the mermaids, that serpent’s tale is fantastic; I particularly like the way that the front of the part has that slight concave curve, setting the torso back just a little. I’m also impressed that the snake tail doesn’t quite sit flat either, giving it a level of movement that has probably been overlooked by many.

I should point out that I decided to not include Jabba the Hutt into this collection of “not-legged” figures. Although he is a figure in the LEGO collection and being slug-like does not have any legs, I decided to exclude him as (in my opinion) he didn’t have LEGO parts that would enable “swapability” (that is, he’s pretty much one piece). 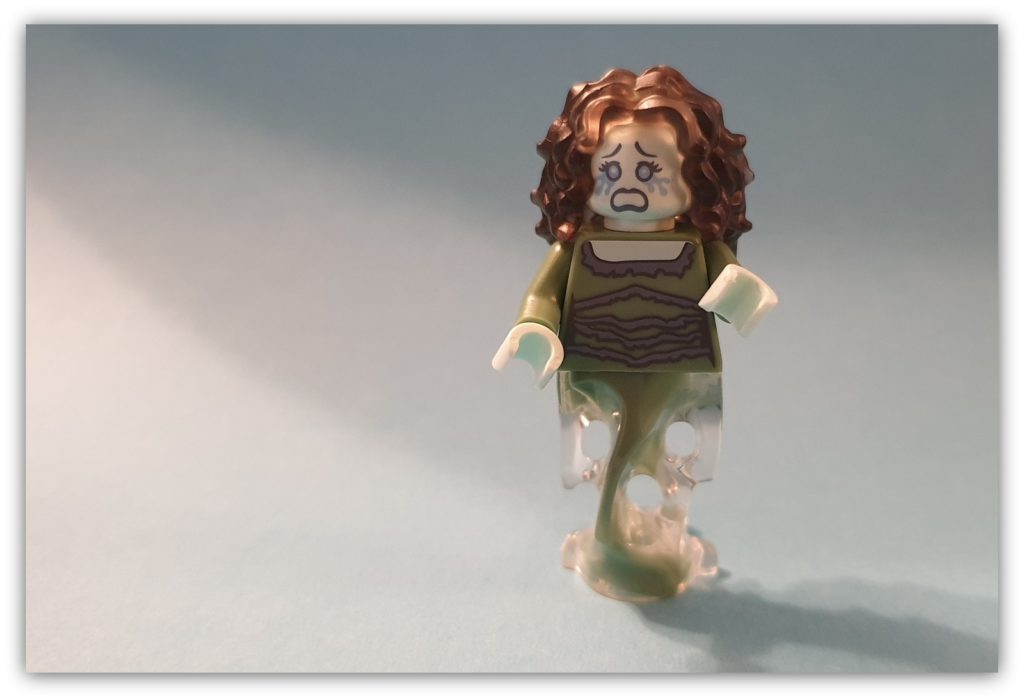 One of my most favourite new parts must be the vapour-like wisps that make the ghost torso. Available in a few different colourways, this part creates the impression of ghostlike figure; which is so very different from the “bedsheet over the head” format that we have seen with LEGO ghosts before. That said, those ghosts do glow in the dark… and my 1990 ghosts still glow as strongly as when I first got them! 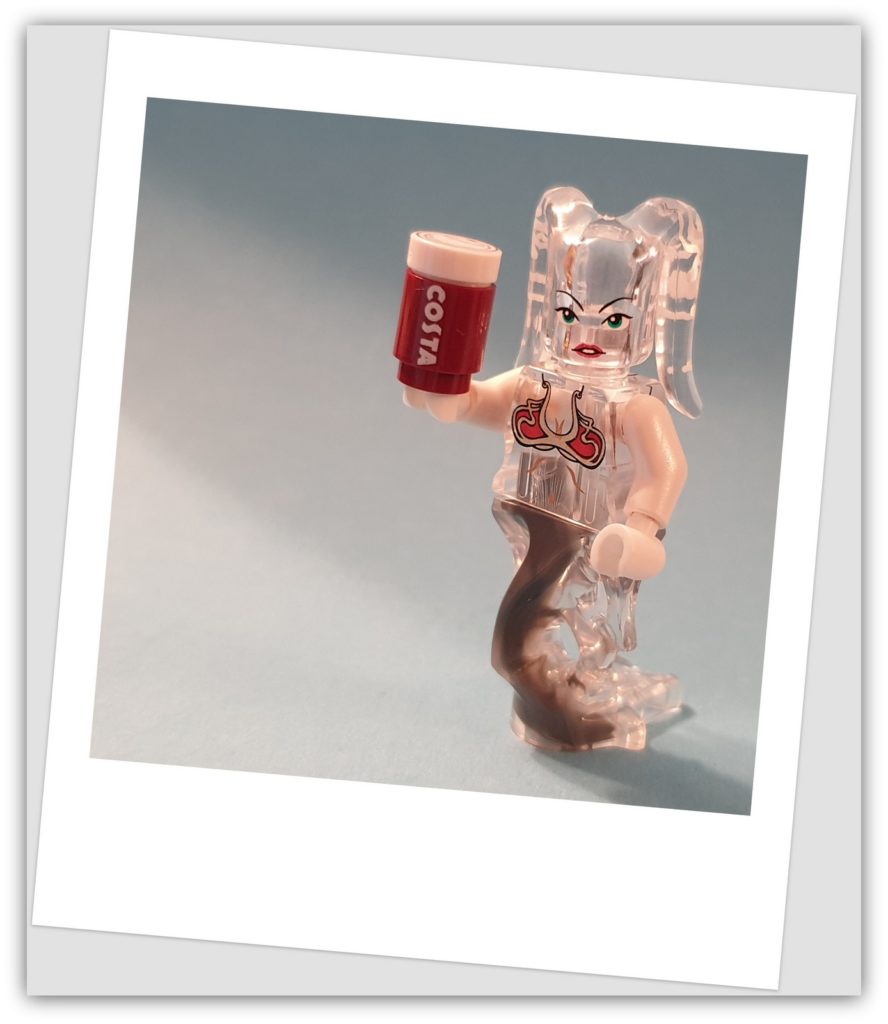 Because you can buy these parts individually, you can create your own versions of ghosts, such as this coffee sprite which uses a trans-clear torso and trans-clear alien head (sady, no longer available in this format). I forget where I got the coffee from, but other coffee manufacturers are available.

But when are not-legs actually legs?

I was talking to my wife about this article and we were coming up with the examples that you have seen in the list above. We talked about what else could also come under this “minifigure without legs” category; for example, should we include the Cars franchise, where the vehicles have personalities, but don’t have legs? As we talked through these options, we realised that there was of course one obvious example for legless minifigures; the lady minifigure. 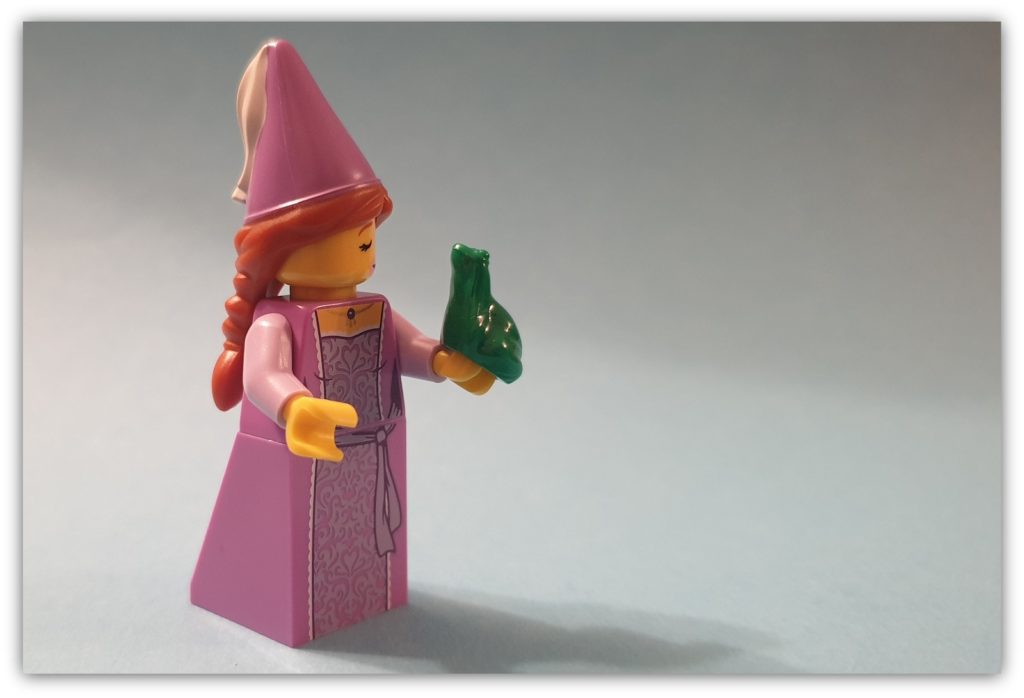 I had totally forgotten about this and yet it was so obvious! LEGO had just used a sloped brick to create a skirt, any suggestion of legs being hidden beneath it! It is such a straightforward design and solution that it has been repeated many times with variations on colour and printing. In the example above, we have our princess in her pink dress, the belt disguising the separation between torso and lower half. 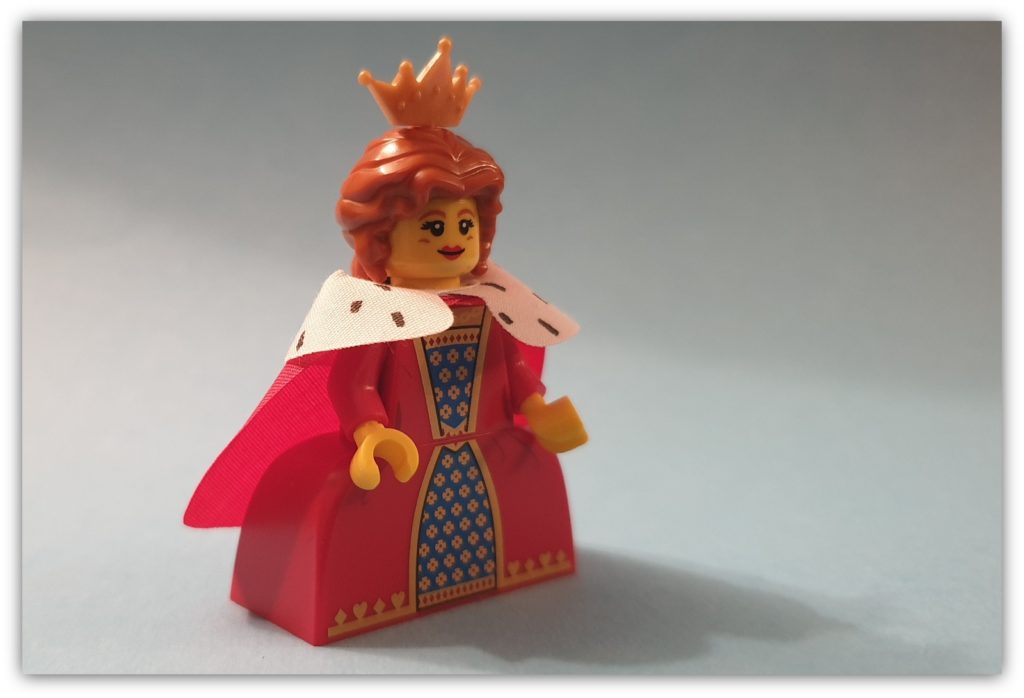 This example is further highlighted with the 2016 collectible figure of the Queen. Here, her dress is extended to the sides and back providing a very classically regal look. Finally, perhaps, there is the dress created for Star Wars’ Queen Padme Amidala in 2012. This is a circular base providing a flared look to her skirt. 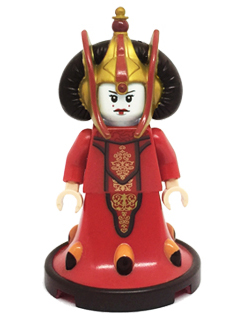 When we were coming up with our list, we threw the net wide to try and think about what could and should be included. Star Wars featured highly; given the nature of the franchise there were lots of options that could have been included, for example Mouse Droids. Some figures, such as Battle Droids were considered, but they looked too “human”.

We very nearly considered pirates; with their wooden peg leg would that be a “not-leg” or a “leg”? Whilst we didn’t include it here, there is still room for deliberation; let me know what you think!