LEGO photography is one of my most satisfying and relaxing hobbies. The little minifigure characters are cheerful and optimistic like I am, and their stylized appearance allows the viewer to use their imagination to fill in the gaps in their details. Speaking of details, one of my favorite things is customizing a figure for photography purposes. I’ve created a “mini-me” or “sig fig” (signature figure) to use as a stand-in for myself in the LEGO world of my photos. Just like me, she’s a photographer and explorer of the wilds of nature. Today, I’m going to look at the newest LEGO CMF Series 21 from a toy photographer’s point of view. 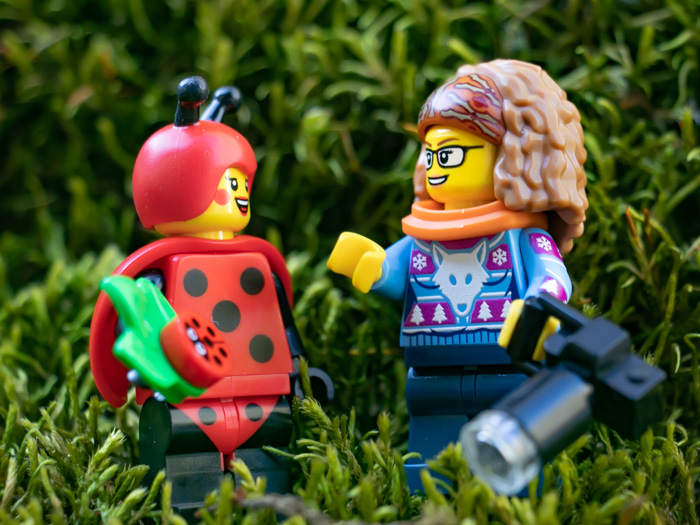 Above, my sig fig explains to one of the LEGO CMF Series 21 figures what we’re looking for during this photoshoot. (And yes, my sig fig is wearing a sweater and orange scarf that I got from Firestar Toys!) 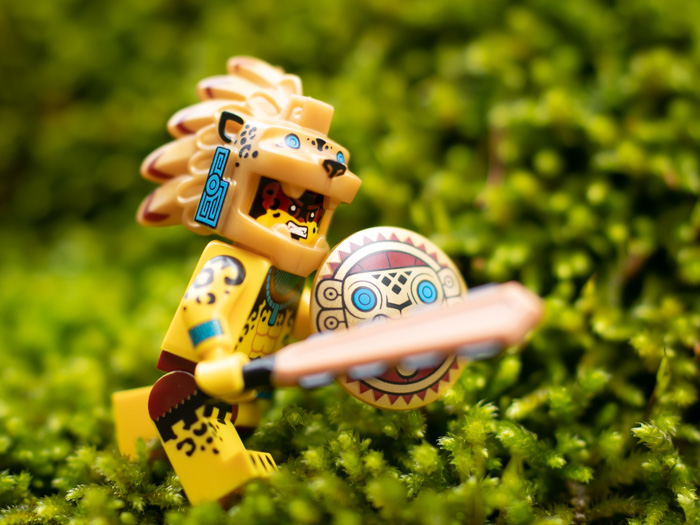 The Ancient Warrior has so many printed body parts! Arms, legs, torso (both front and back!), and two different facial expressions (fierce and friendly). The nature of his weapon and design of his painted body and shield make it obvious that he’s an Aztec jaguar warrior, which is a unique piece of history to research! 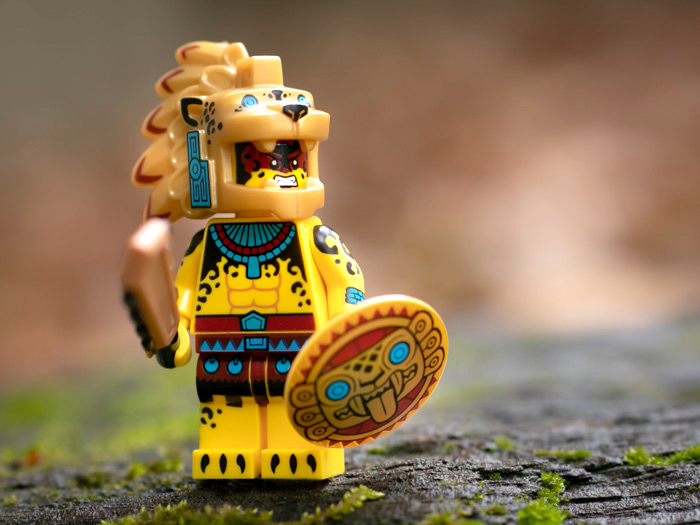 This figure is very photogenic, and every bit of minifigure articulation is functional. Even the massive jaguar headpiece doesn’t get in the way of turning his head. Another bonus from a photographer point of view is being able to see his facial expression clearly, even with the headpiece on. (In contrast, as we’ll see below, the Airplane Girl’s face is pretty obscured by the cap and goggles.) 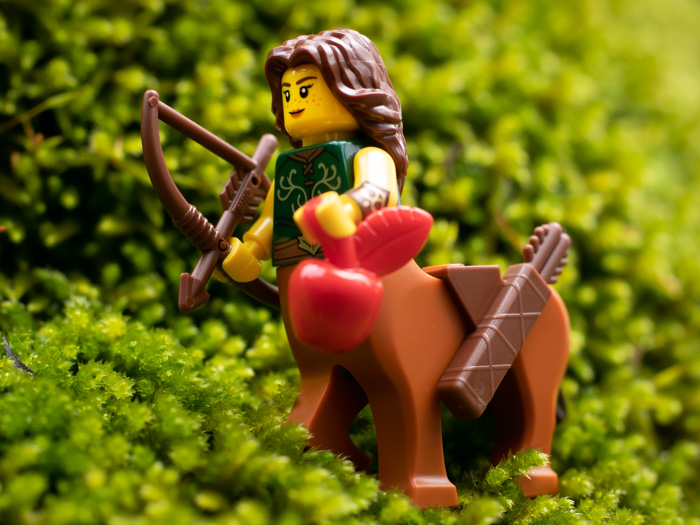 Speaking of warriors, here’s the Centaur Warrior. Her cool printed arms with protective wrist guards is a beautiful touch. However, the hairpiece keeps her head from turning, which severely limits her pose to a static sort of “marching straight ahead” look. I will be ditching the hair and finding something that allows her head to turn and for her to carry the quiver on her torso’s back, instead of her horse back. The quiver falls off nearly every time I pick her up when it’s on the horse back. Her second facial expression is happy and excited, like she just hit the target during archery practice. 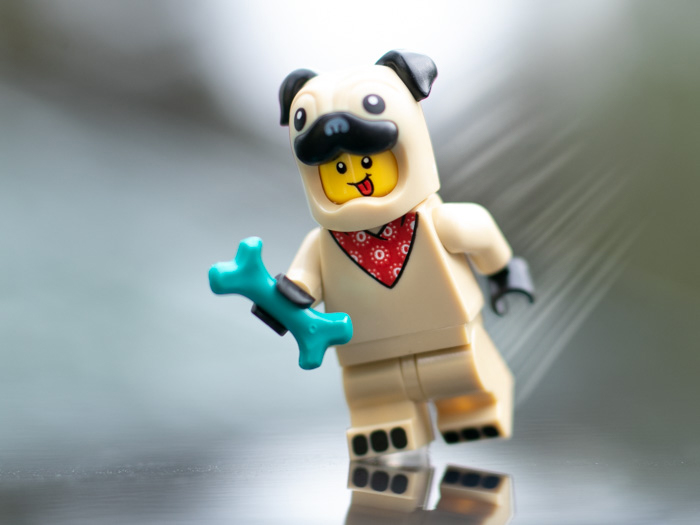 I’m not much of a dog person, but the Pug Guy is still pretty cute! He’ll fit in well if I create a costume party scene in the future. He comes with two facial expressions, which is always handy (both have his tongue hanging out, which adds some nice variety to my collection of heads and available expressions for photos). The extra bone included in the blind bag is a nice bonus! 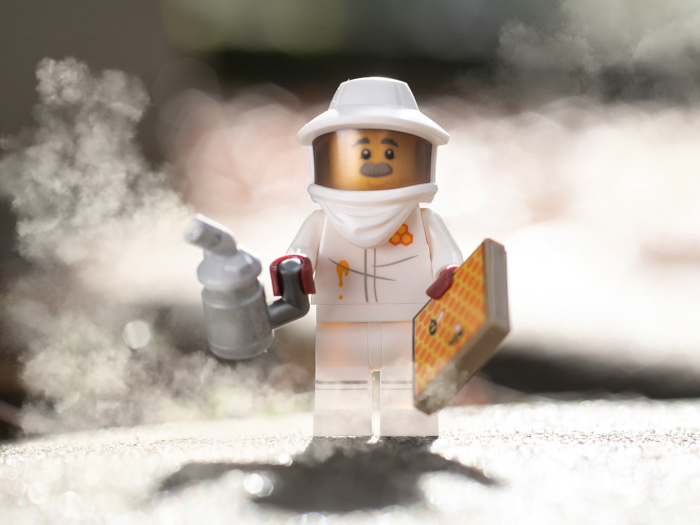 People in my LEGO photography community were excited to have a beekeeper in the collection after seeing one appear in the early episodes of WandaVision. For those who like to re-create scenes from TV or movies, he’ll come in handy! For myself, I enjoy having another “grandpa” face available, especially because the other expression has him licking his lips. The grandpas in my life are great cooks and love to eat! The smoke dispenser is a handy little piece that attaches to the base of a silver LEGO coffee mug, and I can see re-purposing it as an oilcan or even as a sippy cup top or milkshake straw. 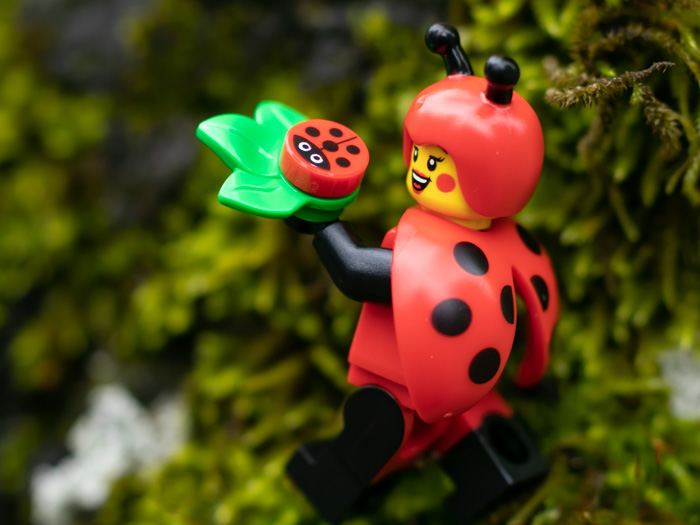 This little Ladybug Girl is one of the cutest parts of the LEGO CMF series 21. Both of her faces are smiling, one with her lips parted, one with them closed. She exudes the delight and optimism so reflective of LEGO’s toy line. The two little ladybug one-dot rounds included in the blind bag are a fun bonus. 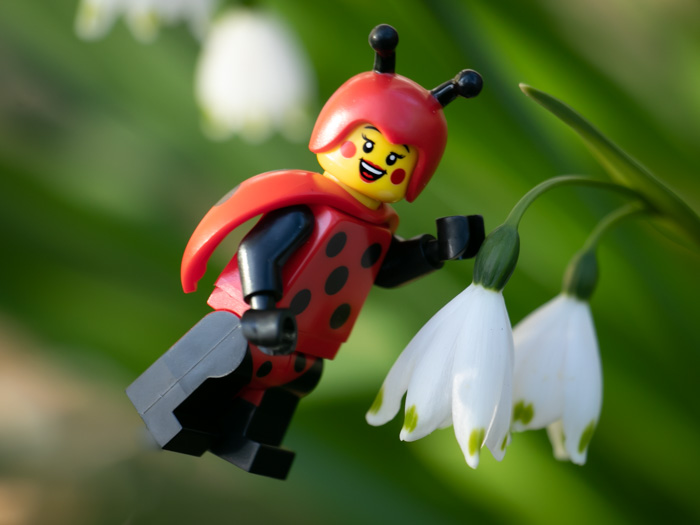 The wings on her back are especially useful to me as a photographer, because they are parted just enough to imagine that she could be in flight. 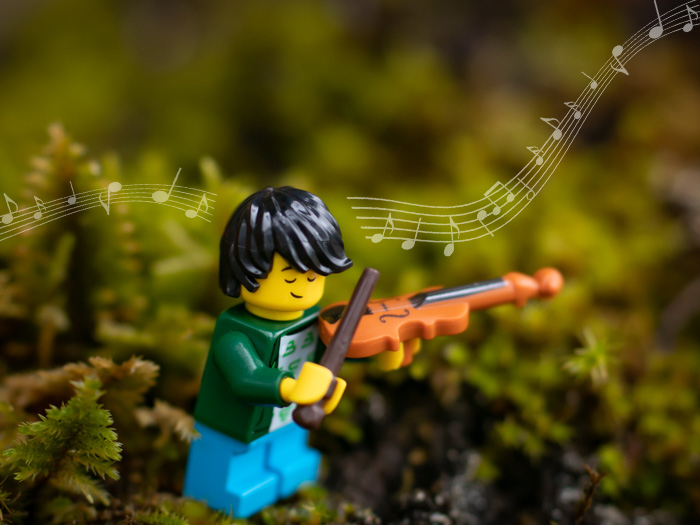 I found the Violin Kid most useful for his contributions to my parts collection. It’s great to add a violin to my musical instruments (there are two “violin bows” in the blind bag, and you probably recognize them as typical “wand” parts that you’d find in a Harry Potter set). The kid has the short, immobile legs of most minifigure children and a nice printed long-sleeved shirt. His two facial expressions are slightly smiling with his eyes closed, and looking a bit unhappy or perplexed (no doubt for when he attempts a complex passage in a musical composition).

The Airplane Girl offers some fun opportunities for me to capture a LEGO character flying. But honestly, the novelty wears off quickly because the details bother my logical mind too much: her hands aren’t on control sticks to guide the plane, it’s hard to catch a shot at the right angle where you can actually see her eyes and smile through the goggles, and obviously someone in an airplane costume can’t actually fly! 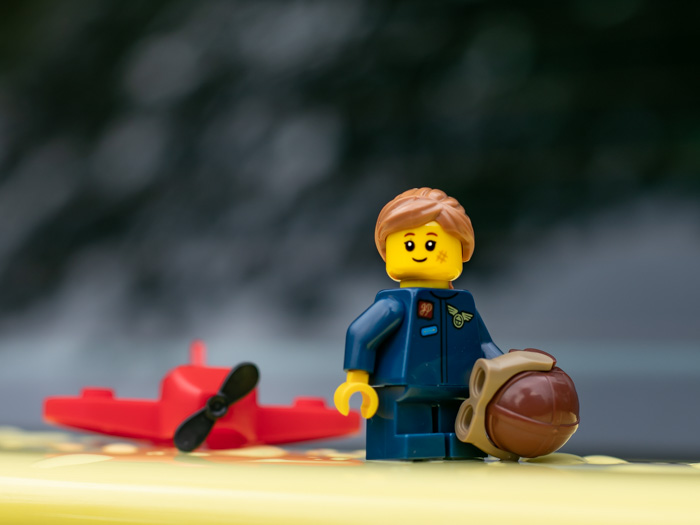 Those issues aside, I do like the tough, determined expression on her face (and the other side has an open-mouthed smile). And the cool flight jacket with printed wings pin and other details is nice, along with the flight cap and goggles. Like the Pug Guy and other minifigures embedded in a costume, she’d be great in a party scene. 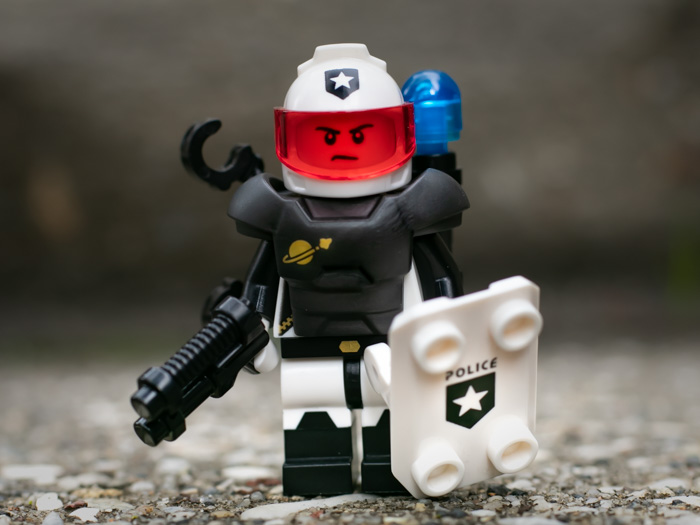 This character has so very many accessories to love! A helmet, armor, shield, gun, handcuffs, AND light stick. Wow! Bad guys better watch out when he’s on patrol. Anybody who enjoys creating space scenes will find this law enforcement minifigure handy for any number of scenarios. 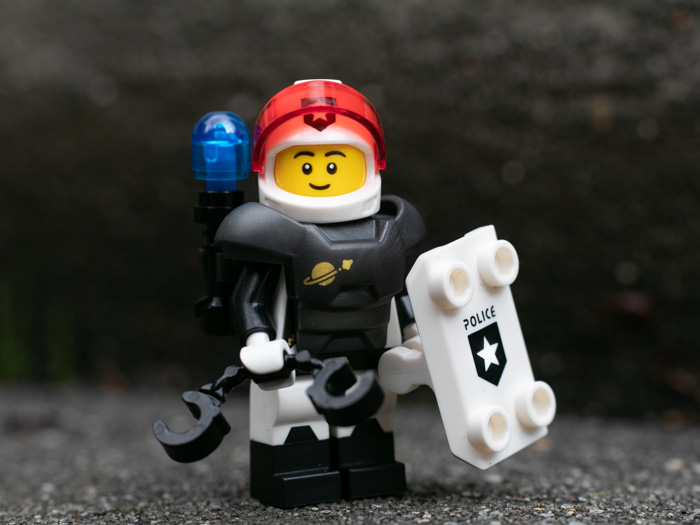 Given all the negativity about law enforcement in the news in America, I really appreciate that the second facial expression on this guy is a hopeful, friendly smile. You can just tell that he wants to help keep people safe with all that gear he’s carrying. 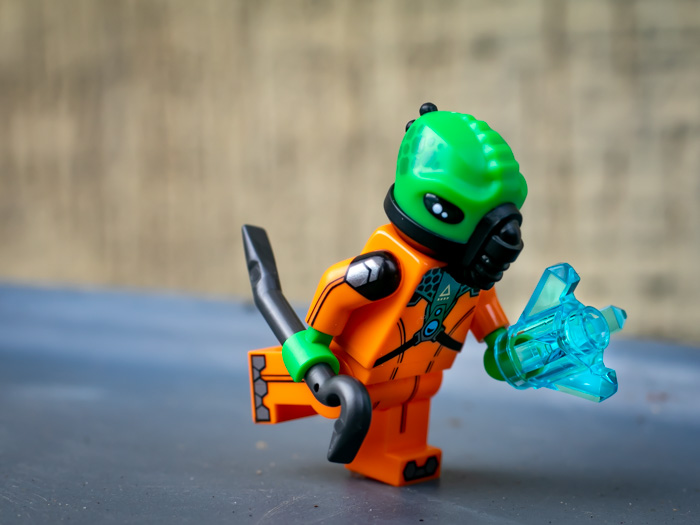 Of course, the Space Police Guy needs somebody to chase, right? You can make up any story you like with your figures, but in my world this alien just pried open a delivery crate and stole a dilithium crystal to power his spaceship and escape. Sadly, the cool breath-mask on this figure makes it impossible to turn his head, so I lose one out of five articulation points. Very disappointing, from a photography point of view. I’m a big fan of alien minifigures but this one will probably sit out most photo shoots, except when I just need characters walking by in the background. 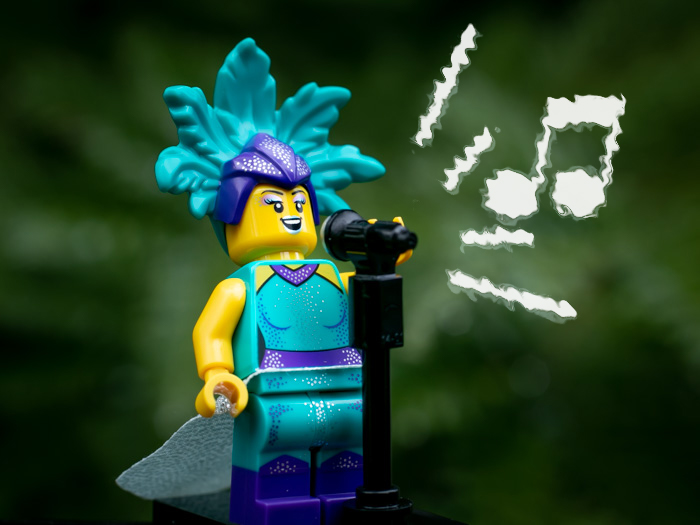 This figure has a lot of glittery bling on her outfit. The sparkles on the Cabaret Singer’s clothing and headpiece pick up nicely in photos, but the extra-shiny makeup on her face make it even more of a challenge to capture her face without a big reflection getting in the way. Still, her two singing facial expressions are so dynamic. She obviously loves her job! The blind bag includes an extra microphone along with the main mic and stand. 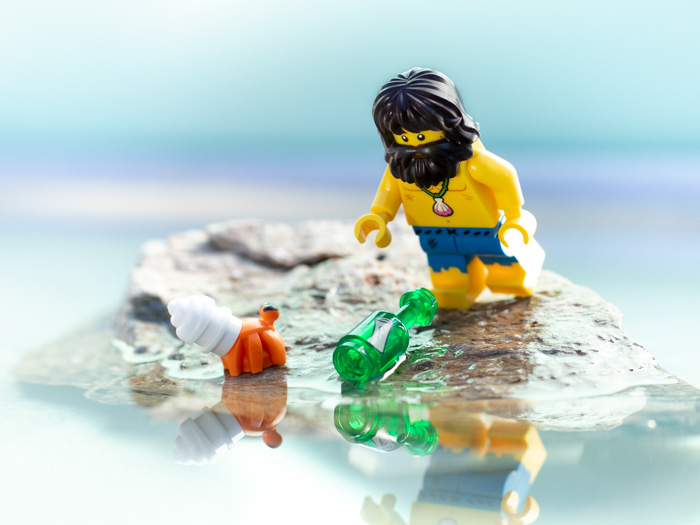 One of my favorite figures of this series is the Shipwreck Survivor and his little companion the hermit crab! Even though his overgrown beard keeps his head from turning, it’s a great addition to any collection of men’s hairpieces. There’s only one facial expression on the head piece, which I can understand since you can’t see it; it’s the only figure in the entire LEGO CMF series 21 besides the Alien who doesn’t have two facial expressions.

I’m looking forward to taking him along to every coastal trip I have, and even any time I visit a lake or creek. However, this photo was actually taken in between rain showers in a metal tray full of water on my driveway (see “behind the scenes” photo below). 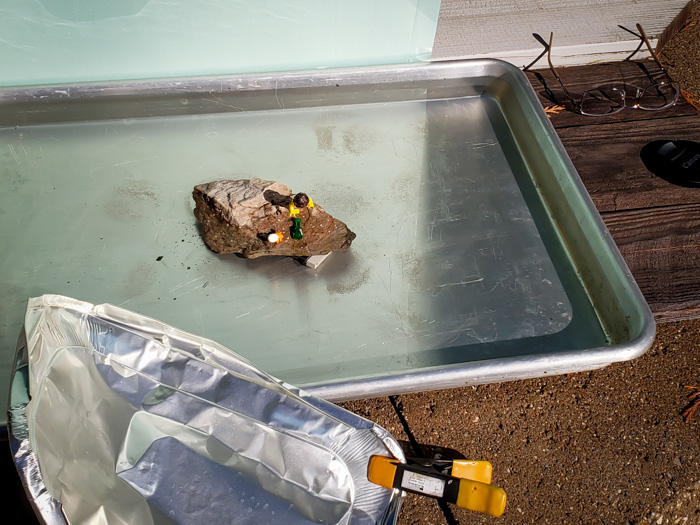 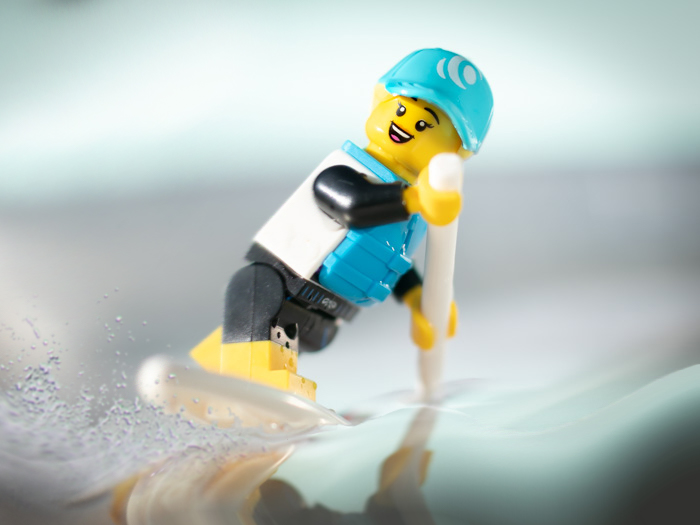 This athletic minifigure is the poster girl for outdoor sporting fun! With her pony-tail hair sticking out the back of the baseball-style cap and happy smile (or cool sunglasses), she’s all geared up for a good time. Add in a life jacket to keep her safe on the water and a stand-up paddle board and paddle, she’s ready to meet whatever she finds on the water—even a dolphin! 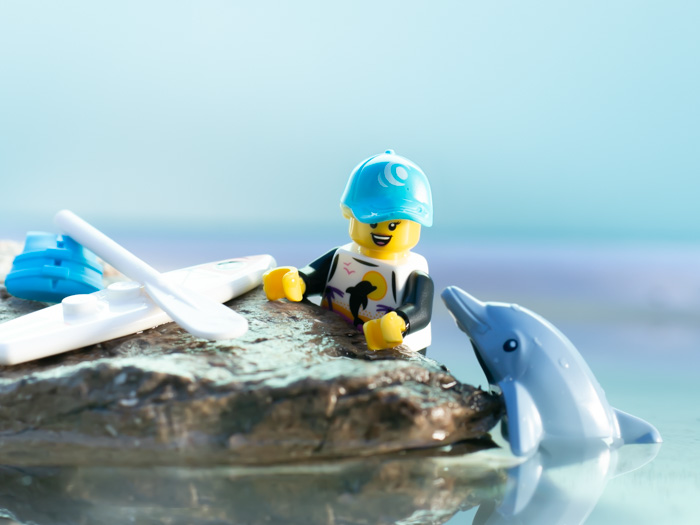 This is another figure that I’ll be packing along to any water feature I visit to capture more photos with this vivacious character.

And That’s a Wrap

Whether it’s the detailed parts to add to my collection for creating scenes to photograph or the great minifigure characters themselves, I am very pleased with LEGO CMF Series 21. This is the first full set of LEGO minifigures that I’ve photographed, and even with the smaller number of figures (twelve instead of sixteen), there’s a great amount of variety. Adult characters, children, creatures, costumes, clothing, hairpieces, facial expressions, different professions and hobbies represented—lots of things to appreciate here.

LEGO Legends of Chima: Where to (not) Find Them

A talespinner at heart, Teddi Deppner encourages the willing suspension of disbelief. Toy photography is an invitation to enter into an alternate reality, one shaped and shaded by the eye and heart of the photographer. Discover the worlds that exist through her lens on Instagram: @mightysmallstories (link: https://www.instagram.com/mightysmallstories/ )