As well as being able to use the many thousands of parts available to make your own mini version of yourself, there are also mini versions of famous people.  For this article, I’m going to look at four American presidents who have been immortalised in LEGO form. 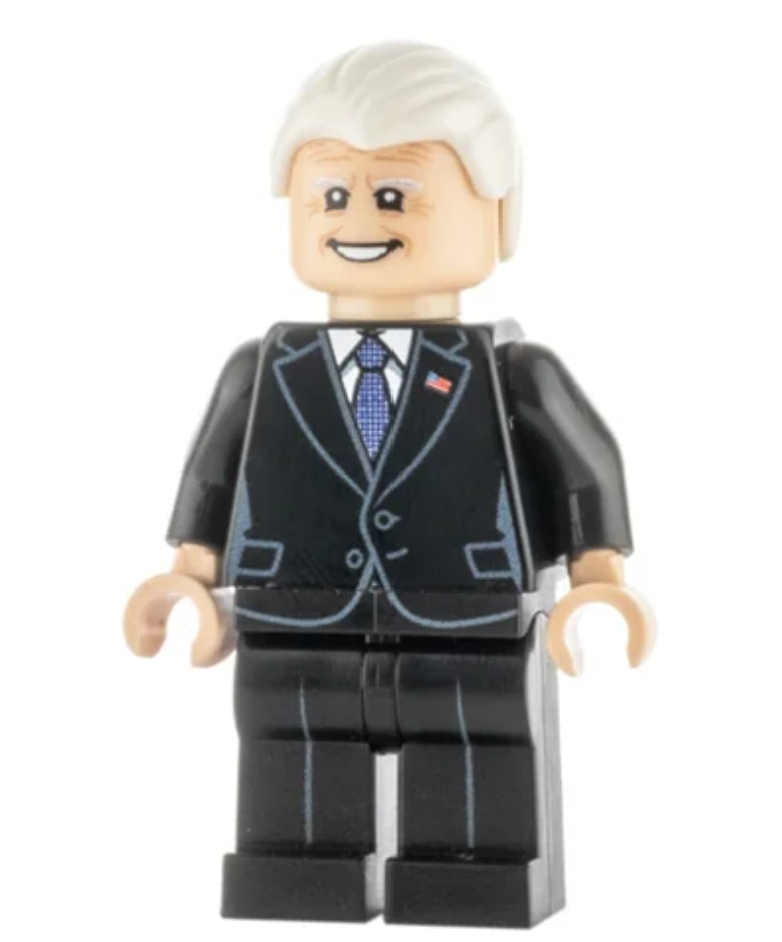 Joseph Robinette Biden Junior was born in 1942 and is the 46th president of the United States. Although his father had been wealthy, the family suffered financial setbacks around Joe’s birth and where they lived (Scranton, Pennsylvania) fell into economic decline in the 1950s, making it difficult for his father to find steady work.

Although a poor student in school, Biden earned his Doctorate in jurisprudence in 1968 and was admitted to the Delaware Bar in 1969. He worked as a public defender but also managed properties to supplement his income.

In 1970, Biden ran for the 4th District Seat on the New Castle County Council, Delaware. This was the start of his political career. From 1973 to 2009 he was a US Senator (and in 1973 he was just thirty, making him the sixth-youngest senator in US history). From 2009 to 2017 he was the Vice President to Barack Obama, before campaigning and winning the presidency from Donald Trump.

As someone who took over the presidency in the middle of a global pandemic, this minifigure comes with a dual sized head so he can wear a mask. 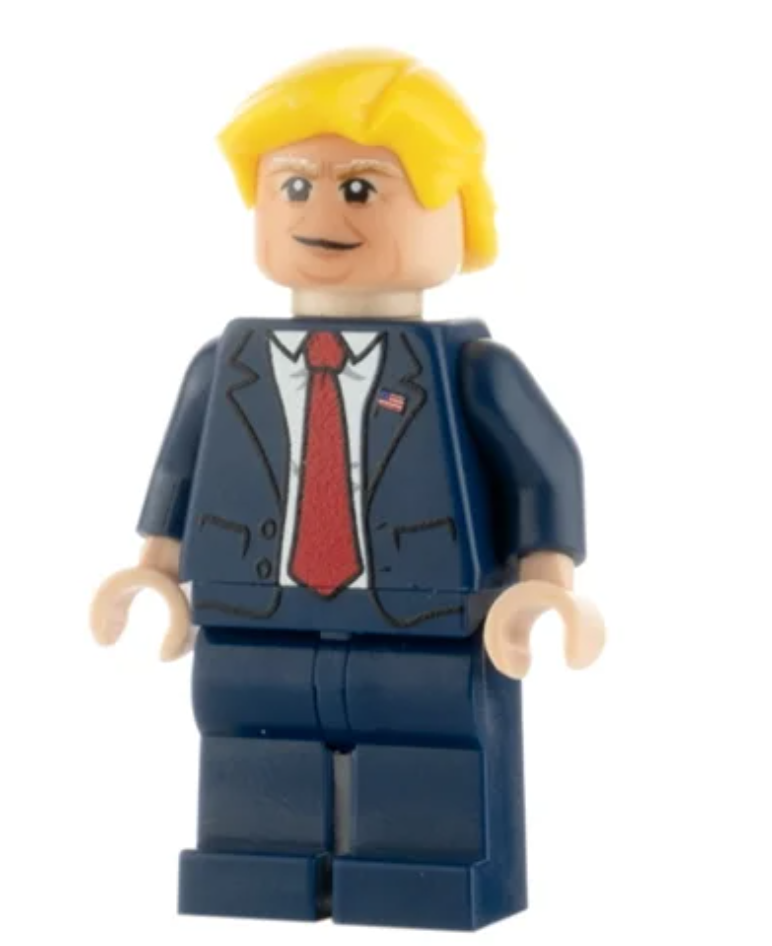 The 45th president has certainly been a divisive figure! He is the second actor to become a president (the other being Ronald Reagan) – and whilst he was mostly in films playing himself, he did play a few characters such as Waldo’s Dad in the Little Rascals.

Born in 1946, in Queens, New York City, he became president of his father’s real estate business in 1971, which he renamed The Trump Organization. His organisation expanded into building and renovating skyscrapers, hotels, casinos, and golf courses. He also licensed his name in multiple side ventures, including owning the Miss Universe beauty pageants from 1996 to 2015.

He is listed as having written up to 19 books on business, financial or political topics; although it is noted that he used ghost-writers to do this. His screen presence has seen him make cameos in films and television shows, including the WWE wrestling shows.  In 2003, he became the co-producer and host of the American show “The Apprentice”.

There’s obviously much political content surrounding his term as president and I’ll pass over that; perhaps this is the minifigure to have if you want a bad guy in your collection. In fact, probably the best bad guy ever, even “despite the constant negative press covfefe” (to use his most famous tweet from 2017). 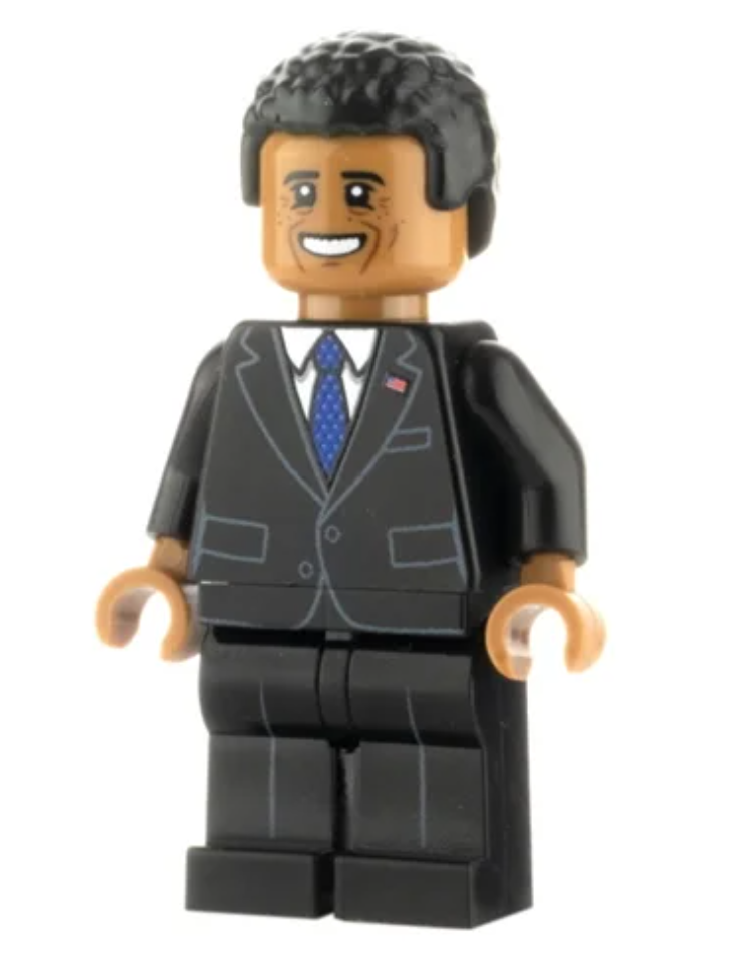 Unlike his successor, the world looked to the 44th president very favourably. Obama was the first African American to hold the presidency, with his vice-president Joe Biden, who we mentioned earlier.

Born in 1961 in Honolulu, Hawaii, he grew up in Indonesia, Seattle before returning to Hawaii where he lived until 1979. In 1988 he enrolled at the Harvard Law School and became the first black person to be president of the Harvard Law Review. Once he graduated, he became a civil rights attorney and academic, teaching constitutional law at the University of Chicago Law School between 1992 and 2004.

In 1997 he was elected to the Illinois State, resigning in 2004 following his election to the U.S. Senate. In 2008 he announced his candidacy for President, choosing the front of the Old State Capitol building in Springfield, Illinois as the location for his announcement. What makes this such a notable place was that this was the location in 1858 where Abraham Lincoln delivered his historic speech, which included the phrase “A House divided against itself, cannot stand.”

Having won over 52% of the popular vote, he won the presidency with 365 electoral votes to 173. He then ran as president from 2009 until 2017; the second term secured with another wide margin and the first Democratic Present to win most of the popular vote twice! 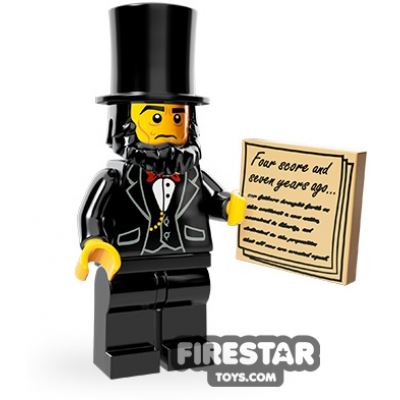 This figure isn’t one from Minifigure HQ but was created in two formats by LEGO as a principle character in the film, The LEGO Movie. In the first film, he was in standard “Honest Abe” attire, but in the second film he had become “Apocalypseburg Abe”!

Abraham Lincoln was the 16th President serving from 1861 until his assassination in 1865.  Born into poverty in 1809, he lived in a log cabin on the Indiana frontier. Mostly self-taught, he was an avid reader and took a lifelong interest in learning. As a teen he was known to be strong and athletic, something that no doubt came in useful when during a campaign speech he saw someone in the crowd under attack and he grabbed the assailant by the neck and seat of his trousers and threw him!

His law practice in Springfield meant that he would handle every kind of business. As he had once worked on the riverboats, cases that involved transportation were the sort of thing he would favour but would represent anyone.  He appeared before the Illinois Supreme Court in 175 cases; of those he was sole counsel in 51 of which thirty-one were decided in his favour; this reputation earned him the nickname “Honest Abe”.

His “House Divided Speech” was made in 1858, shortly after his nomination as a Senate candidate. The campaign featured seven debates which attracted crowds in the thousands. In 1860 Lincoln was elected 16th president. I thought it worth noting that his victory was due to his support in the north and west, with no ballots cast for him in ten of the fifteen southern “slave states”, an omen of the impending civil war. A “slave state” was a state in which the slavery trade was still legal; it wasn’t until the thirteenth amendment to the U.S. constitution was ratified in 1865 that slavery was finally abolished. Unfortunately, it was Lincoln’s appointment that kickstarted the Civil War which ran from 1861 to 1865.

Over his time, Lincoln’s speeches (such as the Gettysburg Address in 1863) have become famous; but sadly, it wasn’t just his speeches that brought him fame.  John Wilkes Booth, actor and Confederate spy had attended a speech by Lincoln and from that hatched a plan to assassinate the president. He’d heard that Lincoln and General Grant were going to attend the play “Our American Cousin” and Booth realised that he could kill both. However, Grant decided to visit his children at the last moment.  On April 14th, 1865 at 10:15pm Booth entered the theatre box and shot the president. Lincoln was taken across the street where he remained in a coma for eight hours before passing away. Booth was tracked down and, refusing to surrender, was mortally shot, and died on April 26.

His assassination left Lincoln as a national martyr and his reputation didn’t diminish after his death. The sociologist Barry Schwartz noted that Lincoln’s memory provided America with “a moral symbol inspiring and guiding American Life”.  Franklin D. Roosevelt used the following phrase “What would Lincoln do?”

However, the real Abe Lincoln did not say “A house divided against itself… would be better than this!” nor did he discover vampires planning to take over the United States; or at least it wasn’t documented in Wikipedia!