This year we are celebrating 20 years since the first wave of LEGO Star Wars sets, which is really impressive. But, along with the recent wave of LEGO Star Wars sets happened something important too: LEGO made the one thousandth figure of the Star Wars theme. For me (and I believe that I am not the only one), that has the same importance as the 20-year anniversary. Some of the biggest online LEGO databases like Brickset and Bricklink needed to update all of Star Wars characters marks because the biggest mark was 999.

First of all, let me explain the database marks for Star Wars figures. The form of the marks was SW001 where SW represent a Star Wars figure (for example, LEGO City have the form cty001) and the number behind the letters marks the order of production. For example, number 357 means this figure was 357th. After LEGO produced 1000th figure in Star Wars theme, all databases needed to change forms by adding one additional zero to the each minifigure name. Now the forms look like SW0123.

When we talk about 1000 figures, it does not mean that LEGO made 1000 different characters from the Star Wars franchise. For example, Luke Skywalker have 44 figures now (yeah, I know, Mark Hamill must be really proud of that). Let’s take a look at two Luke Skywalker figures: 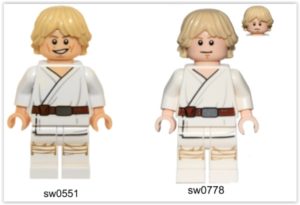 If you are a little bit inattentive, you will say that these two figures are same. Yes, they represent the same character and each of them contain exactly four parts, but – those parts are different. In this case, to be precise, we are speaking only about one part, the head. According to the BrickLink catalog, sw0551 have the head named Light Flesh Minifigure, Head Dual Sided Male Dark Tan Eyebrows, White Pupils, Cheek Lines, Smile / Scowling Pattern (SW Luke Skywalker) – Hollow Stud, while sw0778 have Light Flesh Minifigure, Head Dual Sided Dark Tan Eyebrows, Chin Dimple, White Pupils, Stern / Smile Pattern (SW Luke Skywalker) – Hollow Stud. These two figures have different marks even though they are completely the same if you don’t look at the head. 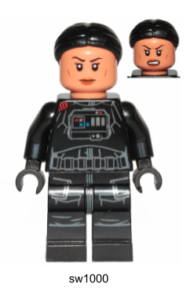 Now, it is time to speak about the sw1000 figure! It represents Iden Versio (Inferno Squad Commander). She is a character from the Star Wars: Battlefront game. The figure is very detailed (you can see her in the picture). Iden’s torso and head are exclusive, which means you can get them only in this set (the set number is 75226). I can say that this figure is must have for every LEGO Star Wars fan. But, there is one thing I would recommend to change –  the arms. Luckily, Firestar Toys made custom printed arms not only for her, but for all Inferno squad members you will get in the battle pack. You can buy the arms for one minifigure, or for all four members of your squad (and of course, get a better price). Speaking about custom printed arms, Firestar Toys made them for a huge range of characters. I am sure you will find something for you and give your figures a special touch.

We all know that the Star Wars Galaxy is huge, so not only the human characters are represented as LEGO minifigures. One big category are the Droids. You probably know for R2-D2 and C-3PO, but the other droids like R3-T2, R2-BHD, Battle Droid, BB-8 got their figures too. 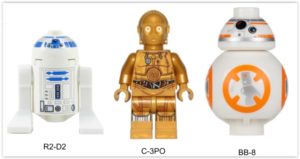 We must mention the creatures too. Jabba The Hutt counts as minifigure, although his size is bigger than a regular LEGO figure. Cute Ewoks and and the desert residents Jawas also have few versions of them.

In the last eight years, LEGO made nine Star Wars advent calendars (two of them were available in same year, 2011, the one was San Diego Comic Con exclusive and the another one was regular one). Every calendar contains  24 gifts including few figures. Some of them are seasonal and exclusive, for example, Santa Darth Maul or Santa Jango Fett. 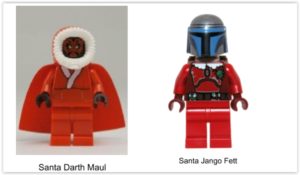 10 years ago, we celebrated 10 years of LEGO Star Wars and LEGO decided to give an awesome gift to the (lucky) buyers of the Star Wars sets. They randomly inserted 10,000 Chrome Darth Vader polybags to US and Europe sets. Unfortunately, 10,000 is really a small number when you compare it to the number of Star Wars sets produced that year. Ten years after that, LEGO made a new anniversary promotion – this time the every anniversary set contains a special figure. They are even collectable. Good thing is that you know which one you will get in the certain set. Here is the list of the sets and their exclusive figures (in brackets):

LEGO noticed that the fans want to build armies of Star Wars droids, Stormtroopers etc. and that resulted with battle packs.The Battle packs are small and cheap sets where you get usually four figures with a small vehicle which helps you in growing your collection. The concept was accepted by the LEGO Star Wars community and LEGO produced 38 different battle packs since. One example of the battle pack is the previously mentioned 75226 Inferno Squad Battle Pack. 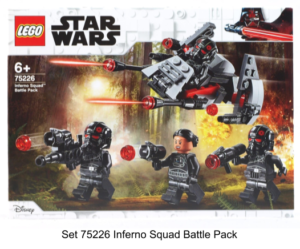 There are a lot of interesting facts connected with LEGO Star Wars figures. Let’s mention some of them:

Last but not least, I would like to give you the one tip about your LEGO Star Wars collection. You may have noticed that many of the figures have capes. That is why I decided to buy more capes for different occasions. I must admit that my Darth Vader was really happy when he tried the Halloween cape. Even more, he felt like king when he saw himself with the Lion cape in little LEGO mirror! Palpatine was really proud of him! You can check the huge range of custom printed capes here. But be aware! When Yoda saw how awesome Vader looked, he wanted new cape too! To prevent a fight between these two guys, I ordered some more capes and I didn’t regret it. They have a really high quality and you can put them on your figures as many times you want.

That is all from me! Many thanks for reading this blog, hope you find some new information about Star Wars figures or maybe remember some you forgot! Feel free to share your opinions in comments section!

And if you want to read more about Star Wars figures, don’t forget to check out Tom’s top 5 minifigures and Phil’s walk down memory lane.