Aaaand we’re back again with more Minifigures in line to be examined! 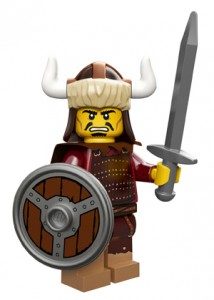 Right. So while the Egyptians and the Romans argued over who gets to rule the Mediterranean and whatnot, other figures around the world were looking forward to exploring the unknown. One of these said figures, is the Hun Warrior (CMF 12).

The Huns have a, how can I say this gently, barbaric reputation (great job, self). This fella, however, seems to be fed up with all the conquering and pillaging, and is trying a new approach: Cookies. Yep, you didn’t misread that, cookies. It’s his way of showing how friendly a Hun can be, even if he’s a warrior. Of course if worst comes to pass, he’s ready for battle, too, but let’s just hope that it doesn’t happen while we’re around.

So what does a Hun Warrior need? A cape, for starters! Not only does it look cool while riding a horse, but it serves as a blanket during cold nights. His dark red cape is unique to him. True, there are other capes of similar looks and colors, but none has seen as much battle and cookie baking as this one. Next is his leather armour, light but very strong. His mom made it for him (yes, Hun mothers are very skillful), and he wears it with pride. His leggings, also made by his mom, have seen better days. Keep in mind that before he decided to bake, he was in many battles. Combine it with days of horse riding, and you get tattered leggings. Oh well, at least they still keep him warm. And last, but not the least, are his boots. They, too, are made of leather, and very suitable for horseback riding. What? Where is his horse? Well, he left it in the stable behind the inn, of course! He has a horse. Yes, he definitely has a horse.

Now let’s take a closer look at his accessories. He has a shield and a sword, fit for a fine warrior, but can also serve as a plate and cake-cutter (he’s telling me that his sword is longer than the Roman Commander’s sword – what is it with men and sword sizes anyway?) Anyhow, apart from his weapons, he has this awesome headpiece, made of copper at the top, fur in the middle, and leather at the bottom to protect his neck. The horns attached to it has several purposes. One, they show how stubborn he is. Two, they’re great for charging against those who don’t like his cookies. And third, they are perfect for drinking tea!

Hold on, hold on, I didn’t say that! Don’t you see those quotation marks? I was trying to convince the Hun Warrior that there is a difference, but being as stubborn as he is, I can’t say I was very successful. You see, the Huns don’t like the Chinese very much (actually, they don’t like anyone very much, but that’s besides the point). As soon as he saw the next Minifigures I took out to examine, he started to charge. So much for being a peaceful baker, I guess.

Right, so our next Minifigures are of Japanese origin (hey, stop biting my hand!) We have the Ninja (CMF 1), the Samurai Warrior (CMF 3), the Kimono Girl (CMF 4) (of course, now you want to make peace!), and the Samurai (CMF 13). I’ll start with the Ninj… ow, stop, I’m this close to throwing you away, no, I said… fine, fine, have it your way. I’ll start with the Kimono Girl (sheesh).

The Kimono Girl is one of the most elegant Minifigures. She has a beautiful red kimono with flower patterns on it, complete with the obi, or the black belt-like part in the middle, which goes all the way back and is tied into a beautiful bow. She has traditional Japanese make-up, a powdered white face, red lips that are painted to look narrower and a little higher than the natural lip size, and black eyebrows and eyeliner. The combination of these colors create a striking contrast on her face, as well as with her black hair, which has small pink flowers and a kanzashi, a beautiful hair ornament.

This little lady is the first to have her own foldable hand fan, which completes her traditional Japanese look. Since its appearance, 4 other figures have also used the hand fan; Flamenco Dancer (CMF 6), Wild West Wyldstyle (The LEGO Movie CMF) and Nya in her Kabuki costume, who has a very similar appearance to the Kimono Girl. 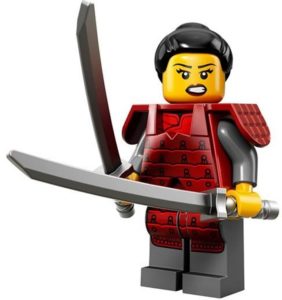 Well, since we’ve started with the ladies, might as well continue with  them. The second lady we have is the Samurai. Now this one is a complete mystery. Nobody knows where she’s from, or why she chose this path, only that she always helps those in need. However, there are rumors that she’s the long lost twin sister of the Samurai Warrior, and chose the same path as her brother without even knowing he exists.

The Samurai has two katana blades, and uses them with such skill. She’s always on guard and ready for battle, and her armour is the proof of that. It covers her chest and thighs, with shoulder pads for even more protection. She rarely takes it off, but when she does, you can see she’s wearing a simple red shirt with gray sleeves. Her choice of colour also prevents her enemies from seeing her injured, though this also happens very rarely. Her hair is tied up in a bun to prevent it from  getting into her way during battle. 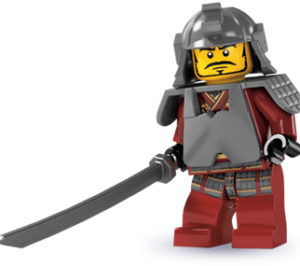 Now, let’s move on to the rumored brother, the Samurai Warrior. You can see that they have many similarities. Take their colours, for example. It’s as if a universal power took the color pattern of one, reversed it, and applied to the other! The warrior’s armor is gray, although a little bit less detailed. Like his sister’s, it also extends to cover his thighs. If he lets you take a sneak peak, you’ll see that he is wearing a dark red robe with flower patterns on it under his armour, along with an obi. His choice of weapon is also a katana blade, but unlike his sister, he prefers one. Although his helmet is not a brand new design, he is the first (and so far, the only) one to wear it in this color. And his face tells us how serious he takes his work, so it may be better to stay on his good side. 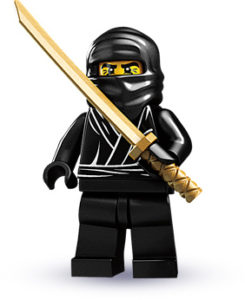 And finally, we have the Ninja (May I talk about him now? Thank you, you’re very kind). This ninja is very different than the other ninjas. How, you ask? Well, even though he wears a shinobi shozoku, the traditional outfit of ninjas consisting of a dark coloured robe and pants along with a hooded cowl, this is the only thing he has in common with other ninjas. We all know ninjas to be the silent, stealthy type, right? This one, apparently, is more on the clumsy side. When he tries to do a back flip, he falls on his face, when he tries to sneak on someone, he makes way too much noise, and when he engages a foe during battle… let’s just say he’s lucky he blacks out before it even begins, because his skills with a sword aren’t too good either.

Of course none of these mishaps lead him away from his path. No, he’s as stubborn as the Hun, and he knows that one day he will be the best ninja in all the land. He gets his courage and inspiration from his sword. A golden, legendary sword, that is said to be first used by an equally legendary warrior, Hitomi of Sentai Mountain. Now she was a true sword master, and our little ninja strives to be like her. Unfortunately, the sword was stolen by some lady called Irina Spalko, but it was retrieved by none other than our little Ninja. He was trying to practice sneaking, so imagine his surprise when he saw the sword in the crate he was hiding in! Bonus points for the sword – though not so much for sneaking, since he barely escaped with his life. But hey, at least he has a weapon now!

It appears this historical trip is going to take longer than I expected. Once again, we’re at the end of the article, and already there are Minifigures lining up to be mentioned. I have to admit, I’m starting to like this, the chance of getting to know them better (don’t tell him that, but the Hun may be an exception). I can only hope you’re enjoying this as much as I do, so if you are, I’ll see you in the next one!

Be sure to check out part 3 of Minifigures Through Time 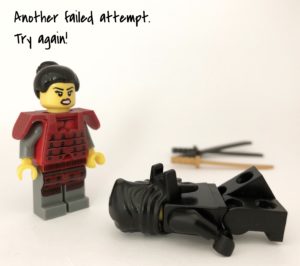 1: This quote is taken from the LEGO Group’s official description of this Minifigure.