Earlier last month, Collectable Minifiugres Series 19 was revealed. The series is really interesting, you can read our take on the series here and here. But one figure immediately grabbed my attention. The reason for that was a hard nostalgic feeling. The figure, named “Explorer” acording to Brickset reminded me of one of the legendary LEGO characters, Johnny Thunder. 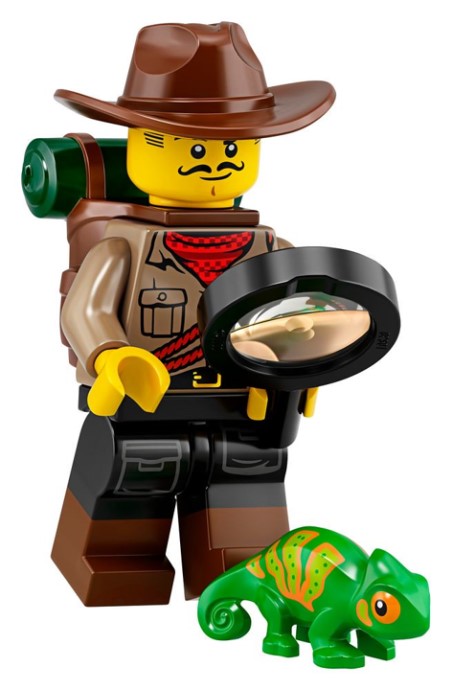 But who is Johnny Thunder?

He is an Australian adventurer and a passionate archaeologist Sam Grant (sometimes the name Joe Freeman is used for his real name) who travels with his fellow archaeologist Dr. Kilroy and a photographer, Pippin Reed, who works for “World Magazine”. They are the main protagonists of the LEGO Adventurers theme. LEGO Adventurers theme was popular and one of the longest LEGO themes. It was active between 1998 and 2003. The theme was divided into three sub-themes: Egypt, Jungle and Dino Island. In those subthemes, Johnny had the most recognisable look. A figure that has black legs and a tan torso representing a shirt. The shirt had two pockets, a black belt with a revolver and a bandana around his neck. His hands were yellow of course, like his face. Johnny’s face had a black moustache, sideburns, hair, a cleft chin and a smirk. He wore a brown camping hat that is folded up on one side.

Especially for the Orient expedition theme, Johnny Thunder was redesigned with three new variants, one for each area he visited. The India variant of the figure got two pockets on tan pants. Torso design was the same, only the main colour is changed to green. In that version, Johnny got pupils in his eyes, and a little bit more subtle smile. Johnny’s torso changed colour once again for his trip to Mount Everest. The new colour was brown. Also, the colours of some items on his shirt are changed, as you can see that on pictures below. Looks like Johnny mostly prefers an outfit he wears in the three original Adventurers subthemes, because he chose it again for his China adventures. 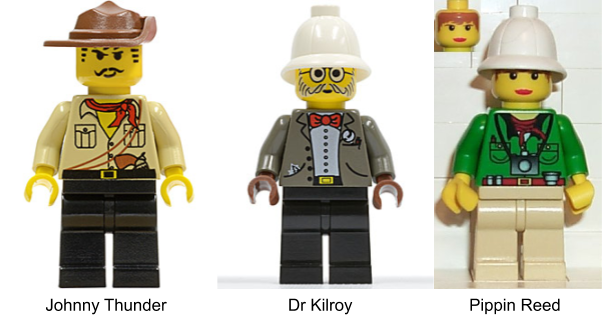 He is also a movie star. He appeared in The LEGO Movie and got back printing on his head and a detailed outfit. In video games, he has his original appearance with some minor modifications of his first outfit. Here is the list of video games containing Johnny Thunder, but I also recommend you to read my opinion about The best LEGO videogame here:  LEGO Racers 2, LEGO Stunt Rally, LEGOLAND, LEGO Universe, The LEGO Movie Video Game, Soccer Mania and LEGO Island 2.

Of course, every Johnny adventure has an interesting story behind it. He is a treasure hunter, too, but instead of keeping what he finds to himself, he donates all the treasure to museums. Every hero must have his enemy, and there is no exception here. Lord Sam Sinister have this role. He is evil and selfish, with no limits to his ambition. He always hunts for more but only to increase his private collection. His character changed names a lot of times, so he is known as Baron Von Baron/Barron, Sam Sanister/Sinister, Evil Eye and Mr Hates. It is an interesting fact that Johnny Thunder was described as a young ex-army officer when the Adventurers theme was first introduced in the United Kingdom version of the catalogue, but that story was never expanded. 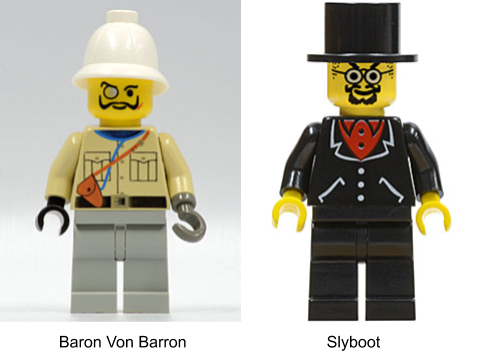 Johnny’s first adventure leads us to Egypt. He and his friends, Dr. Kilroy, Pippin Reed and pilot Harry Cane, were trying to find the Re-Gou Ruby, a gem that was said to have great magical powers before Baron Von Barron and his partner, Slyboots. Ruby was protected by the undead Pharaoh Hotep. Pharaoh rests in his tomb full with a lot of traps for uninvited guests. When Baron Von Barron tried to steal the ruby, Hotep appeared and dragged the screaming Baron into the unknown. After that, Baron was trapped in the mummy’s curse, which consisted of Pharaoh Hotep cracking off incredibly corny jokes until the Baron went mad. 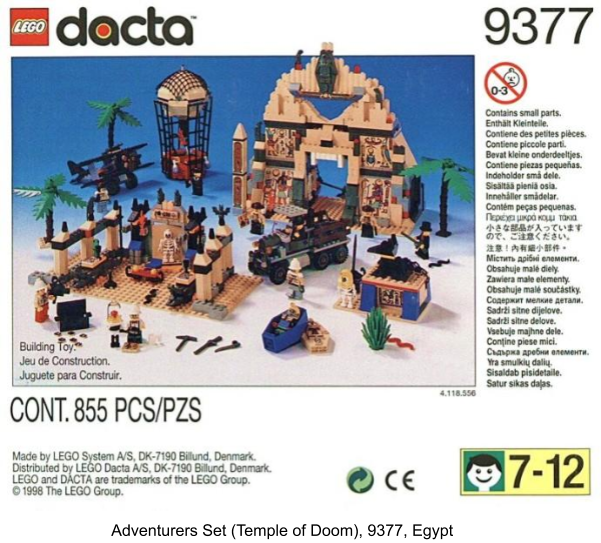 The same Egypt team was in the next adventure too, this time in the Jungle. They were going to the Amazon River in South America to find the magical Sun Disk, protected by Achu, guardian of ancient treasures with mystical powers. Achu is a neutral character, opposing both the adventurers and their opponents Palomar (Señor Gomez in the United Kingdom) and Rudo Villano (Max Villano in the United Kingdom). Palomar is a South American bandit who is helping Baron Von Barron in collecting gems. Another new character, South American sailor, Gabbaro helped both Palomar and Johnny to find the Sun Disk.

In the journey to Dino Island, the team was changed for the first time. Harry did not travel with Johnny and his friends, but their new assistant, Mike, replaced him. Baron Von Barron returned, but with a different name, Sam Sinister. His assistants were Alexia, his sister and the poacher Mr. Cunningham. This time aim was not to find gems, but capture dinosaurs to study them. Baron made an attempt to take them back to the mainland and open a dinosaur park. Luckily, he was not able to do that. For this theme, many amazing dinosaur figures were created, and many of them still have a special place in LEGO collections around the world.

But Johnny’s adventures did not finish there. He and his team went to India to search for the mythical Golden Dragon. They visited Scorpion Palace decorated with a giant scorpion, which turned out not to be only decoration – moving its claws causes boulders to fall, locking the door to the Palace. They visited Mount Everest and China, too. In China, the group was captured by Dragon Fortress Guards. They were locked in the Great Wall, but fortunately, Pippin escaped and rescued Johnny and Kilroy.

They used the side entrance of Dragon Fortress, the Golden Dragon was saved, but it turned out to be home of Jun-Chi, a lion-dog. Johnny opened the doors using a sword and a shield which transformed into golden keys. Evil Emperor Chang Wu attacked the group with catapults while they were trying to escape the fortress, but fortunately, he was not successful.  Before finishing his adventures, Johnny visited Egypt one more time, to investigate a tomb were strange noises had been coming from. Finally, in Greece, Johnny beat “The Guardian of the Golden Bull” and was awarded by an artefact. 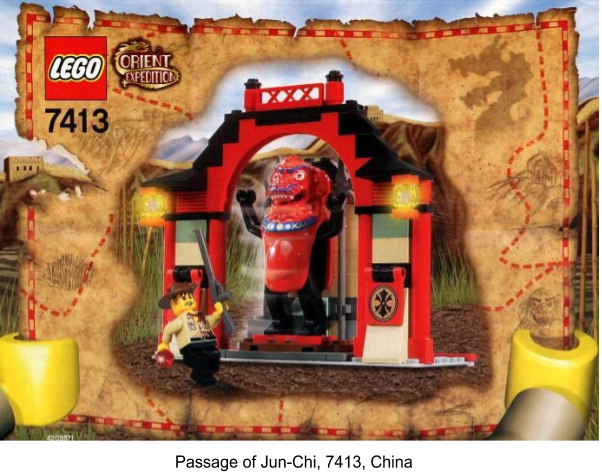 Is Johnny Thunder back?

After all these stories, we only need to answer the question from the beginning of the article. Is Johnny Thunder back? I don’t think he is back, but LEGO wants to remind us that they are thinking about adult fans of LEGO and their nostalgia about old themes. His adventures are still very interesting for LEGO fans who heard about him and for younger fans who hear about him for the first time. I believe that this is the reason why Adventurers sets are still wanted by collectors. Max, the LEGO Club figure, once said, Johnny is still on vacation after adventures and sends him postcards. I believe that we will continue seeing him in cameo roles in videogames or even sets. You will agree with me that Johnny needs a little bit more rest after all those adventures and excitement!

That was all from me. Many thanks for reading this blog post. Do you remember Johnny Thunder? Do you maybe plan to buy this figure from Collectable Minifigures series 19? Tell me in the comments section!

Which Harry Potter Minifigures are Rare and Why?

LEGO Science Fiction Minifigures – Are they back?