Ladies and gentlemen, welcome to the final part of Minifigures Through Time. In a matter of a few weeks, we have travelled to many different times and cultures, and took a sneak peak of what was going on behind the curtain. We had a chance to get to know the historical minifigures, and the things going on in their lives. Today, we conclude that journey, and get ready for another one.

Among the remaining historical minifigures, there are a few who work together, or know each other, but mostly, they prefer being alone. Therefore, I’ve decided to call them… the Lone Wolves. Ok, it may not be too original, but hey, if something is working, why not use it, right?

A Man and his Swords 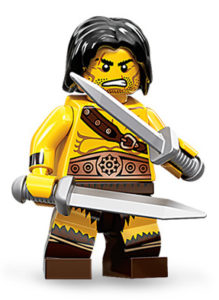 The first character to go under the blade (so to speak) is the Barbarian (CMF 11). Even though he looks very fierce, he has the saddest story. You see, all he wanted was to fight for a cause. It really didn’t matter what kind of cause, he just needed one. He tried to become a gladiator, but he was rejected because there was no vacancy. He wanted to be a king’s guard, but the king already had his knights. When he tried to join the Hun army, they said he didn’t have a proper mustache.

So after rejection after rejection, they say, the Barbarian couldn’t take it anymore. One night, while sitting in front of the fire and eating his roasted rabbit, he had a nervous breakdown. He tore off most of his clothes, cut his hair (it used to touch his feet), and decided to become unstoppable.

The Barbarian has scars all over his body and face, from his many battles. After tearing off his clothes, he realized he acted a bit rash. The only piece of clothing left just wouldn’t stay on! So he found a belt, and fastened the torn cloth to it. He also wears a chest strap, but nobody knows what it’s for – and nobody dares ask him. The bronze bracelets he wears came with his belt, and he found them very useful against vicious beasts trying to bite his hands off. He has two silver short swords, both of which he uses skillfully.

Rumor has it that while he is fearless in battle, his spelling techniques need a bit more work. Once he realized how important spelling was, he found a huge building with many scrolls in it, and started to visit it in his free time, eager to learn.

These two guys, the Conquistador (CMF 8) and the Aztec Warrior (CMF 7) don’t get along too well. You see, the Conquistador is very fond of gold, not because it’s valuable, but because it looks so shiny! He has searched many places looking for it, but whenever he found gold, there was always someone telling him to go away, or worse, attacking him.

He did manage to take away a little, though, using it make his helmet and armor. While the design of his helmet goes way back to the 1990s, he thinks he perfected it by making it from pure gold. The same is true for his breast plate: If it isn’t made of gold, it isn’t made at all! 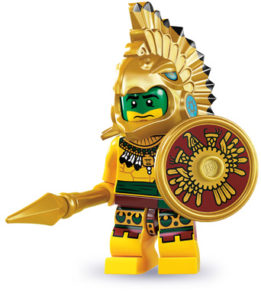 The Aztec Warrior, on the other hand, is tasked with protecting the gold of the Aztec Empire. True, the Empire has lots of it, but they worked hard to get it. There’s no way he is going to let anyone steal it. He is, after all, a proud member of the Eagle Knights, and his duty is to serve and protect the empire from sunrise to sunset. His shift ends when the sun is out, and he’s replaced by a Jaguar Knight.

His helmet, spear and shield are made from pure gold. The shield has an eagle printed on it, very useful when he loses it, though he rarely does. His helmet is also in the shape of an eagle head, and you can see his face from the opening of the mouth. Once, the Emperor sent word that he should paint half his face blue and the other half yellow, which is what the greatest warriors do. However, the message changed until it reached him, so instead of separating the two colors, he mixed them and painted his face green. The Emperor was not very happy about that, and decided to send his messages using birds rather than people next time.

Meanwhile, the Revolutionary Soldier thinks all this arguing is unnecessary. So three guys came together and said “All for one, and one for all”, so what? That’s not enough to be a musketeer. They don’t even have muskets, for crying out loud! He, on the other hand, is the true musketeer here, since he has the only musket!

While these guys go on and on about that, let’s take a closer look at them, shall we? Like I mentioned above, the Musketeer and the Swashbuckler share the same hat, down to the plume, but the colors are different. Musky has a black hat with a white plume, while Swashy has a brown one with a red plume. They both carry an “épée”, a thin sword with its tip blunted. Both have a great smile, although Swashy’s does seem a bit forced. As for their outfits, Musky dresses like a true gentleman while Swashy is much bolder, revealing his muscular body for everyone to see. Both  wear black pants, but Musky also has brown knee pads. 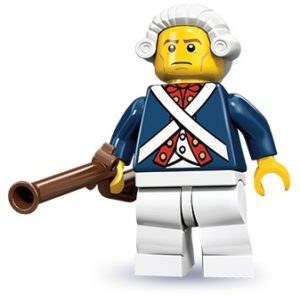 The Revolutionary Soldier is a freedom fighter. He has a navy blue uniform with red button lining and white straps, with his white shirt showing underneath, and wears white pants. His face shows how seriously he takes his freedom. His hair piece is unique to him, a white wig with a ponytail tied with a ribbon. While he doesn’t like fighting, he carries a musket to show everyone he’s ready to do what’s right. The musket has been around for many years, and it’s been used by pirates and soldiers alike. He takes great pride in having the same weapon that was used by his very ancestors.

Next in line is the Desert Warrior (CMF 16). Even though his name and appearance says he is a warrior, that’s just what they are, an appearance. Don’t get me wrong, he is a skilled fighter, the men in his culture have to be, but that’s not how he wants to be remembered.

No, this man is an artist. He has spent so much time in the desert that he knows every grain of sand there, “[and] many of them by name” he says. This close connection has allowed him to build amazing sand castles. Okay, so they are only seen by his closest friends, the sand grains, but it doesn’t bother him. He knows who he is, and so does his friends! (honestly, at this point I’m a bit worried for his mental health… just saying…) 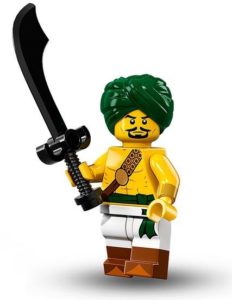 The Desert Warrior doesn’t wear much. I mean, do you know how hot it gets in the desert? We’re lucky he’s even wearing pants! He does use a dark green waist sash, though. With the winds you get at night, he doesn’t want his pants to fly off. His boots are very fancy, brown leather with pointed tips. They come in handy when walking in sand. Who would want to have sand between their toes, right? Even if they’re your friends. (seriously guys… mental. health.) His outfit is completed with his dark green turban, and his scimitar to keep up appearances. Ah, I almost forgot. He also has this brown chest strap, one he decorated himself with his beautiful needlework.

“They may take our bricks, but they’ll never take our imagination!”

The Highland Battler (CMF 6) is a proud warrior who loves playing games. Bricks, videogames, competitions… you name it. If there’s play involved, he’s in!

Losing means humiliation in his book, but he doesn’t think he has to win even though it means cheating. No sir, he is a strong supporter of rules, and for him, cheating to win is worse than losing!

Highland Battler’s hair isn’t new, in fact it’s been worn by wizards, queens, and even villains! However, he alone has it in this particular color. He wears a traditional belted plaid kilt on top of his leather armor, fastened with straps and a brooch. As for his sword… he is the first minifigure to use that type of sword ever since its introduction in the Lord of the Rings sets in 2012. His shield has been used by several minifigures before him, but he is the second one in having a printed shield in the world of Collectible Minifigures. In fact, most of the printed shields like his belong to the characters from the CMF series. 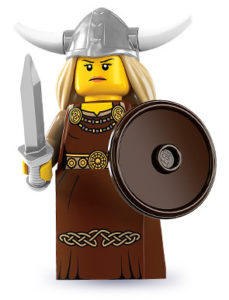 The final two on our list is the Viking (CMF 4) and the Viking Woman (CMF 7). Of these two, the Viking Woman is very, very special. You see, there have been a Vikings theme before in 2005 & 2006, but all the minifigures were male. She is the first ever Viking lady minifigure. And hopefully, now that LEGO is teaming up with Dreamworks, more may follow!

Like all Vikings, the Viking Woman (I’m going to call her Vicky) is a fierce warrior. This can clearly be seen on her face. What you don’t know is that she’s also an amazing singer – or so they say. When the  battle is finished, Vicky puts aside her sword and shield and starts singing. 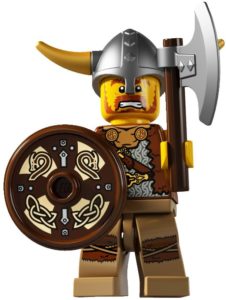 Having heard that, the Viking (he can be Vic) started to look for a battle for her to sing about. He does want to impress her, of course, but mostly because he wants someone to sing of his victories. You know how you can’t find something when you look for it? It’s as if all the monsters have hidden from him, all the battles have already finished. He can’t find anything to fight!

Both Vicky and Vic prefer brown outfits, although Vic’s pants have discolored and tattered a little bit in his search of a battle. Vicky has a plain brown shield, while Vic’s is decorated. Her sword is the same as the Barbarian’s (above), the Gladiator’s, and the Roman Commander’s (here). Vic prefers an axe instead.

According to the prophecy, one day Vic will find the monsters he’s looking for and emerge triumphant from the battle. On that day, Vicky will start singing a song which will be sung for many generations to come, and they will become lifelong partners.

That concludes our journey, ladies and gentlemen. Thank you for sticking with me through this rather long series of articles. So let me ask you now, which historical minifigures would you like to see in the future? Who do you think would make a great addition to the team? Or maybe there are some I’ve forgotten to mention? Let me know in the comments! 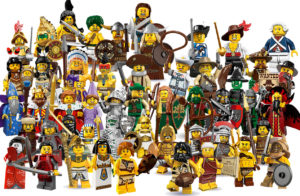 Disclaimer: While most of the facts mentioned in this post came from reliable sources, the  relationships of the characters and their backstories mostly came from the author’s imagination. Any and all similarities between what’s mentioned above and what the LEGO Group has intended are purely coincidental.

Images showing single figures are taken from www.brickset.com . The group picture is a collage of all the minifigures mentioned in the Minifigures Through Time series.

I Think I’m Living with a Superhero – Part 3