Welcome back to Myths and Minifigs, where I scrounge around on Brickset and try to find tenuous links between minifigures from across LEGO’s history in the hopes of making an entertaining article. Luckily this week, I didn’t have to struggle too hard at all. This week we are only going to look at two minifigures, both of them from Collectible Minifigures blind bags, but like last time they have a special place in the history of film: LEGO Godzilla and King Kong.

This year, we saw one of them return to the big screen, and in 2020 we will “let them fight” for the first time in 50 years. Two triumphant, terrifying kaiju monsters, perfectly captured in minifigure form just as they return to the cinema for one, epic showdown.

Just don’t let Warner Bros. hear you call them that. LEGO doesn’t have, and has never had, the rights to either character, but as you will see in this article, that hasn’t stopped wily designers from making their own tributes to these two iconic creatures.

If you’ve seen a Godzilla movie (or Pacific Rim) you will have heard that word, but for everyone else in the proverbial room, “kaiju” is a term from Japanese cinema. It means a “giant monster”, the kind you see destroying cities with a single swish of its tail or stomp of its huge, oversized foot. The effect is usually done very simply: the monsters are actors in suits, and the cities you see suffering beneath their scaly feet are built to scale with them. This technique has been used since the late 1930s, but became more famous internationally with Godzilla‘s release in 1954 (can you believe it was that long ago?).

If you grew up with Power Rangers, the Megazord fights were shot this way. And the monsters the Megazords pummel to bits? Those are kaiju too.

As special effects have advanced – and visual effects, work done entirely on computers, have been born – the term kaiju has come to mean any titanic monster of that size, breaking from a solely eastern tradition into western pop culture. The many US Godzilla adaptations and the 2013 film Pacific Rim (which uses the term kaiju outright) kind of saw to that.

There have been many important kaiju in pop culture, but two have really stood out, to the point where next year, seeing them fight on-screen is being set up as a huge cinematic event, and now that we have some context, I’ll dig into the monsters and minifigures themselves. 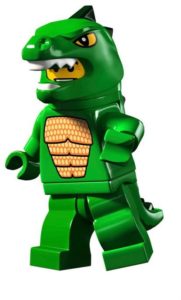 The idea of Godzilla was born in the middle of a Japan that had, less than a decade earlier, suffered the tragic explosions at Nagasaki and Hiroshima, and the fear of atomic power and particularly the bomb played heavily into Godzilla’s origins. In the 1954 film, this gigantic lizard is an ancient marine reptile awakened from its centuries-long slumber by hydrogen bomb tests. In fact, the bombs have made it stronger, and there is little the Japanese army can do to stop Godzilla’s rampage across the country.

Godzilla is a skyscraper-tall lizard, with spikes running down his back, and dark-grey scales. He can fire atomic blasts from his mouth, lift huge weights (and other monsters) with his immense strength, and lets out an iconic, blood-curdling wail that is heard for miles around.

2011’s 8805 Collectible Minifigures Series 5 gave us Lizard Man, a minifigure-sized lizard who, to a regular minifigure, probably wouldn’t seem scarier than any other monster. After all, he’s just a minifigure, not some brick-built Oni Titan or Voltron mech. He is also bright green, and the printing on his belly seems more like a turtle’s chest than Godzilla’s. The minifigure is actually quite nice overall, with a new mould for the headpiece and tail (which connects to the neck), printed eyes and teeth, and dark green highlights for the spikes running from his head down to the tip of his tail.

Oddly, he seems to have been made from a different kind of plastic to normal minifigures, and many have reported that their Lizard Man’s joints are too loose. On balance though, he’s a bright, fun minifigure that’s immediately evocative of Godzilla.

The actual similarities are tenuous though, right?

All of that said, there is one really key element to note here: the head. An ordinary yellow minifigure head. The expression is nothing special, but the fact that it is used to imply that Lizard Man is just a suit is. Remember how I said that kaiju films were shot with actors in suits against scaled-down sets? This is a very deliberate nod to that production technique, and a great way for LEGO to add emphasis to the implication that yes, this is a facsimile of Godzilla.

As a semi-professional stop-motion animator, King Kong is a classic that is close to my heart. Released in 1933, the titular Kong is a gigantic gorilla who is uprooted from his home in the dinosaur-infested jungles of Skull Island and brought to New York City. Chaos ensues as Kong lashes out at his captors, resulting in the incredible sequence where he climbs the Empire State Building, briefly declaring dominance over mankind’s greatest achievements until he is tragically shot down. Kong himself is stop-motion, and composited into live-action footage…or at least he was. Forget the CGI-heavy 2005 and 2017 remakes (Kong: Skull Island is a treat, if you haven’t already seen it) for now. We’re interested in the Toho Studios version of the character from the Japanese King Kong vs Godzilla in 1962 and from King Kong Escapes in 1967. Why, you ask?

Well, he was an actor in a suit. Seeing a pattern? 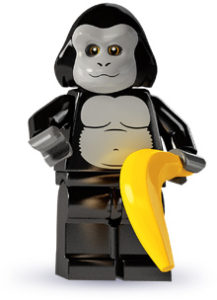 8803 Collectible Minifigures Series 3 featured a lot of great minifigs, but most importantly, it had a minifigure dressed as a gorilla. The head is a moulded piece with a large grey area printed on for the gorilla’s face, while the simply black torso has a printed chest and stomach. The look is simple, but sells the gorilla well, and is still a fantastic addition to the Collectible Minifigures tradition of “animal suits”.

Like with Lizard Man, there is a human face underneath the moulded headgear, showing that this is a person in a gorilla suit and not simply a gorilla, but there is one final, even nicer and more direct detail – the printed zipper running down his back! Once again, a sly nod towards this great icon of cinema that LEGO cannot officially honour.

As much as I would love to see other crazy kaiju be made into minifigures, I am at least glad that LEGO could unofficially give us the two greatest, most recognisable ones in an unofficial capacity. Sure, a Godzilla set would be great (as would getting Lizard Man recoloured in Godzilla’s actual dark grey) but the fact that we have a close approximation – and indeed one including a meta joke about the genre – will have to keep me happy for now.

For now though, it’s time to close the coffin lid, and snuff out the lanterns. We’ve already covered a lot of ground in Myths & Minifigs, but I’m happy to assure you that we also still have a long way to go. This time might have seemed a little bit tenuous, but I thought it was important to cover this fun addition to the lineup. Next time, however, we’ll be looking at some more directly-monstrous minifigs, who hail from deep beneath the sea…

Make sure you check our 2019 Film Calendar to see other movie related minifigures! 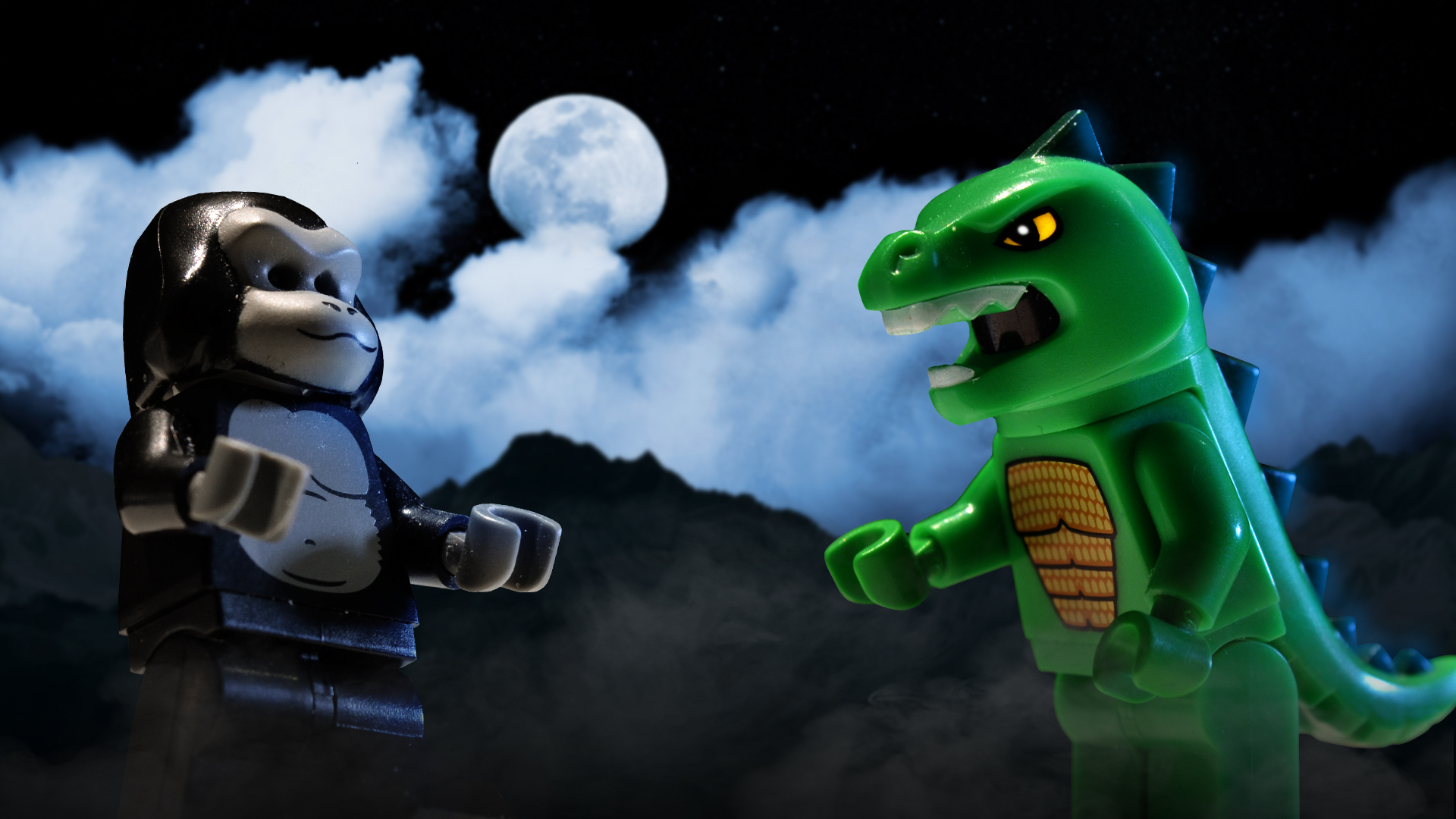 How to Display Minifigures: A Beginner’s Guide