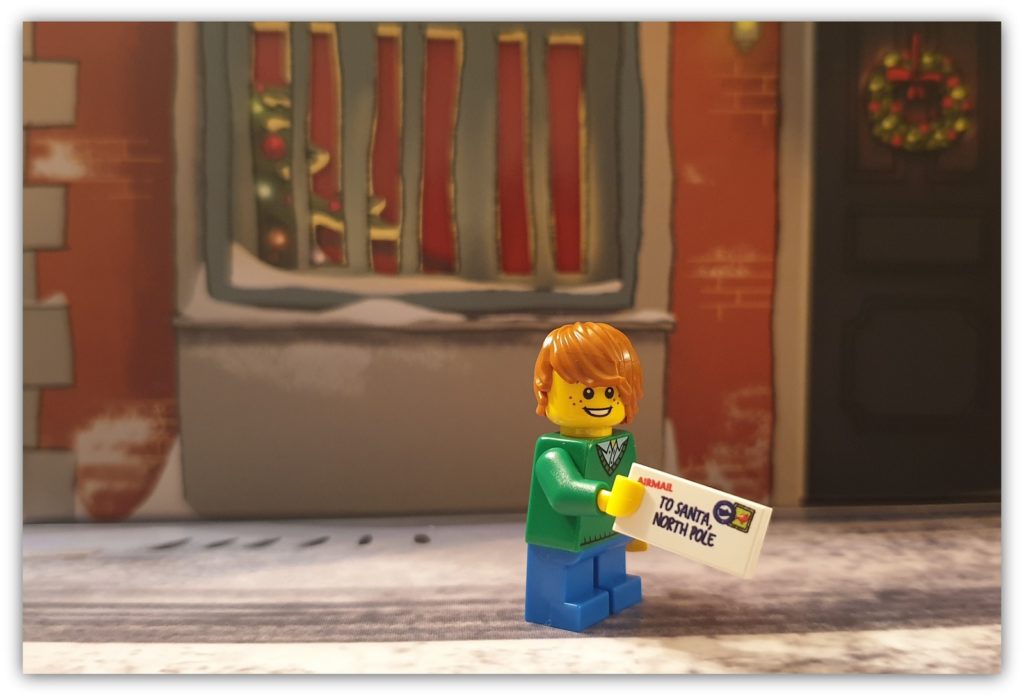 As it gets closer to Christmas, children all around the world will be sitting down to write their special lists and get them mailed to Santa. And there are many, many thousands of letters!  Obviously, Santa needs a little help to read all the letters; so he has several teams who will help him out. I was lucky that I was able to spend a few days in LEGO North Pole over the summer and talk to one of the teams about what they do and how the whole thing works. My guide was the head of the team, Nurgle. 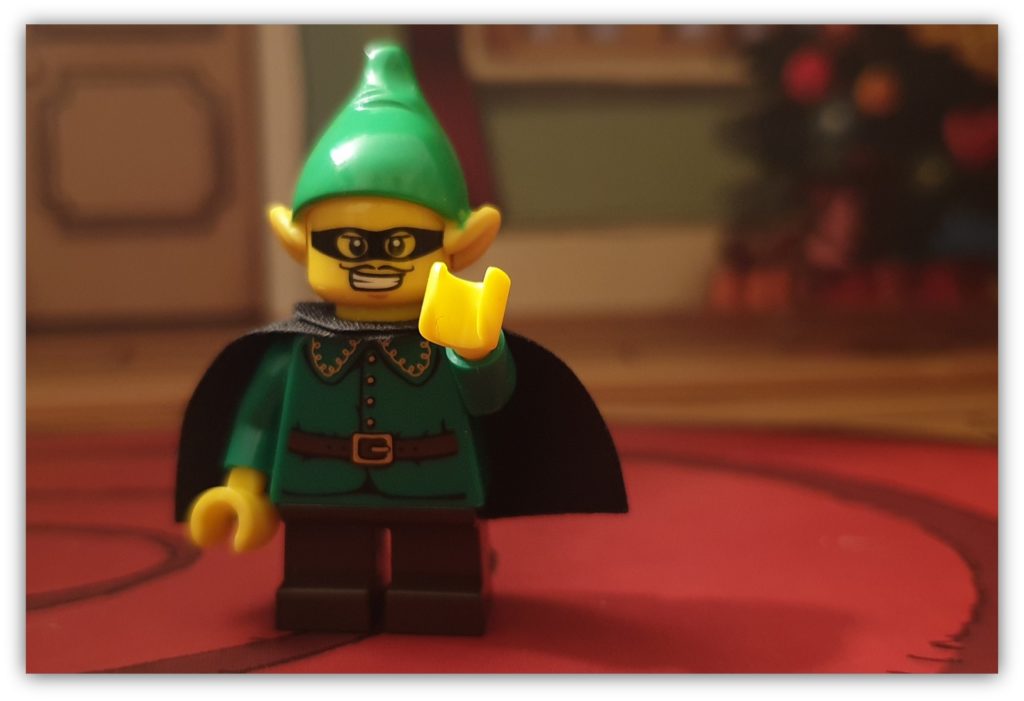 I’ve been with Santa now for about 90 years; elves don’t age the same as normal people, so I’m still seen as a junior elf. That said, although I’m young I’ve worked my way up to team leader. I look after this team and we called ourselves Team Comet. Our job is to deal with the letters that come from the areas you know as England, Scotland, Wales, Ireland; also the little islands that surround those. But not Jersey or the Isle of Wight; those two are managed by Team Prancer who also look after France.

So, let me tell you about how we deal with the letters and introduce you to the team. 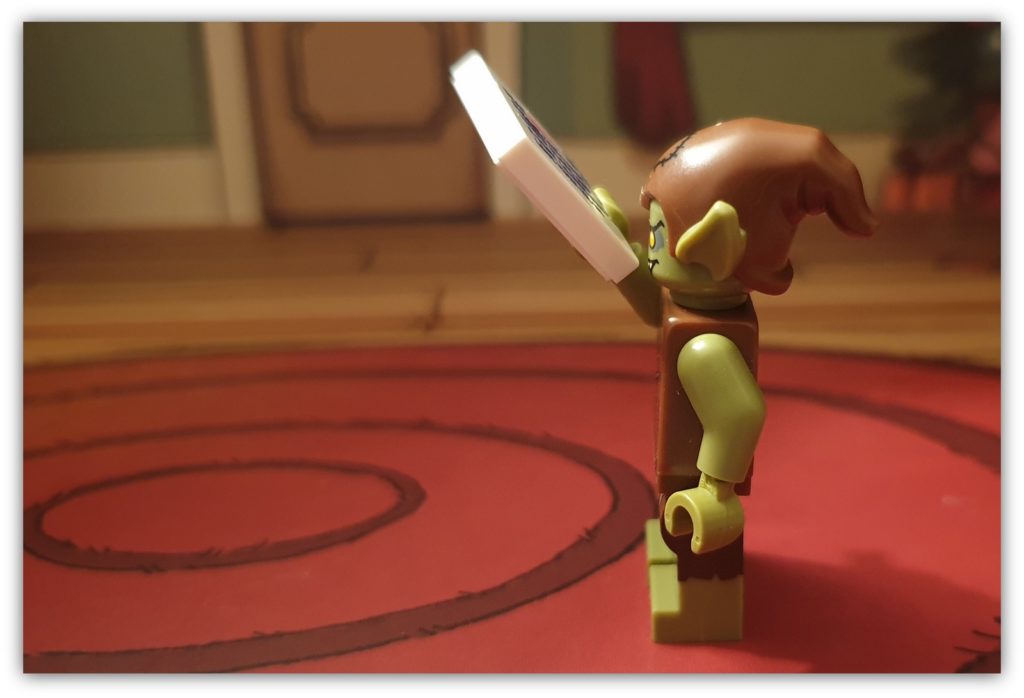 Once a week in November and then once a day in December the big bags of post arrive to LEGO North Pole and the envelopes are looked at and sent to the appropriate team; so letters from Germany go to the Blitzen team, English letters to us etc. We have a special conveyor belt that carries them by high speed where they are dropped into a big pile. And that’s when our first team member gets stuck in.

Nustral is a special type of elf with a very special sense. She can smell letters from good boys and girls from bad ones;  so she quickly separates them out into two piles. It really doesn’t matter what you told Santa when you saw him, Nustral can sniff the truth out from your letter. Oh, and it doesn’t matter if you wrote it on a computer, Nustral’s sense of smell is something else! We even tried putting a letter from a bad boy into a letter from a good girl; Nustral managed to open the letter and put the envelope and the letter into the correct piles; which certainly confused ReeHandro when he opened the letter and found nothing in it!

Once Nustral has sniffed her way through the post, our next elf takes over. 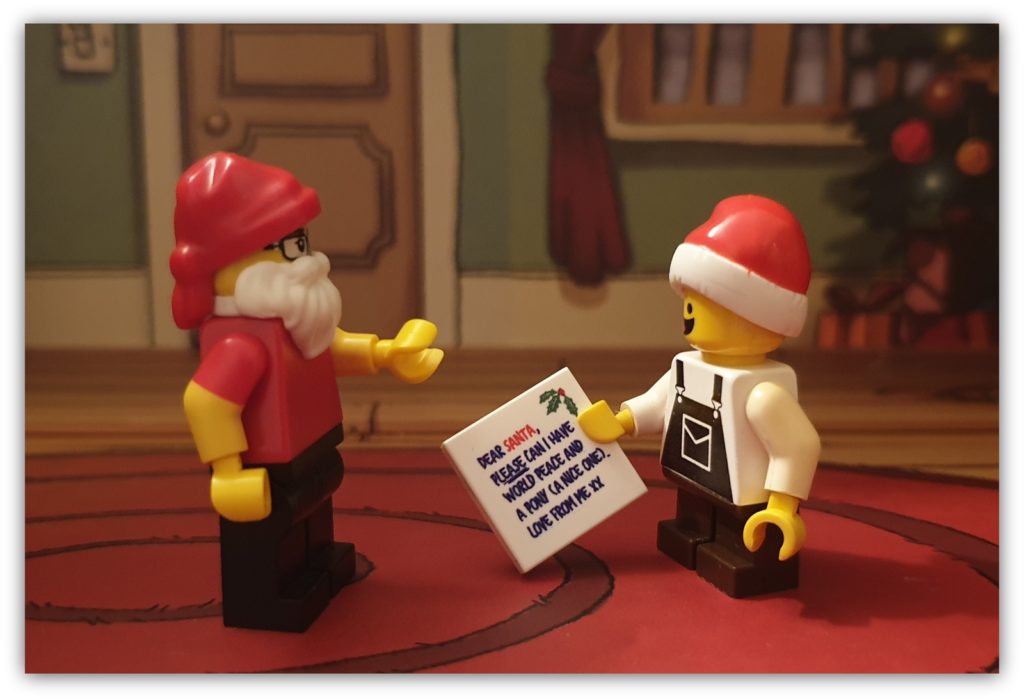 Carthand has been on the team as long as I have; he picks up the piles of letters and hands them to one of two elves who are either on the Good List or the Bad List. As you have probably guessed, Carthand is also an unusual elf in that he’s about the same height as a normal human mum or dad. That’s really useful because it means he can carry more letters in one go than any of us elves.

Don’t get me wrong, elves are incredibly strong; you only have to look at the toy building room to see feats of strength and energy that is simply mind-boggling; you know those LEGO sets that take you hours to build? Well one elf can build one of those in about ten minutes; in an hour it will be broken down again, put into packets and boxed up. Occasionally they work so fast that they might miss a piece; that’s why every now and again you find an extra piece in your set… or a piece missing. 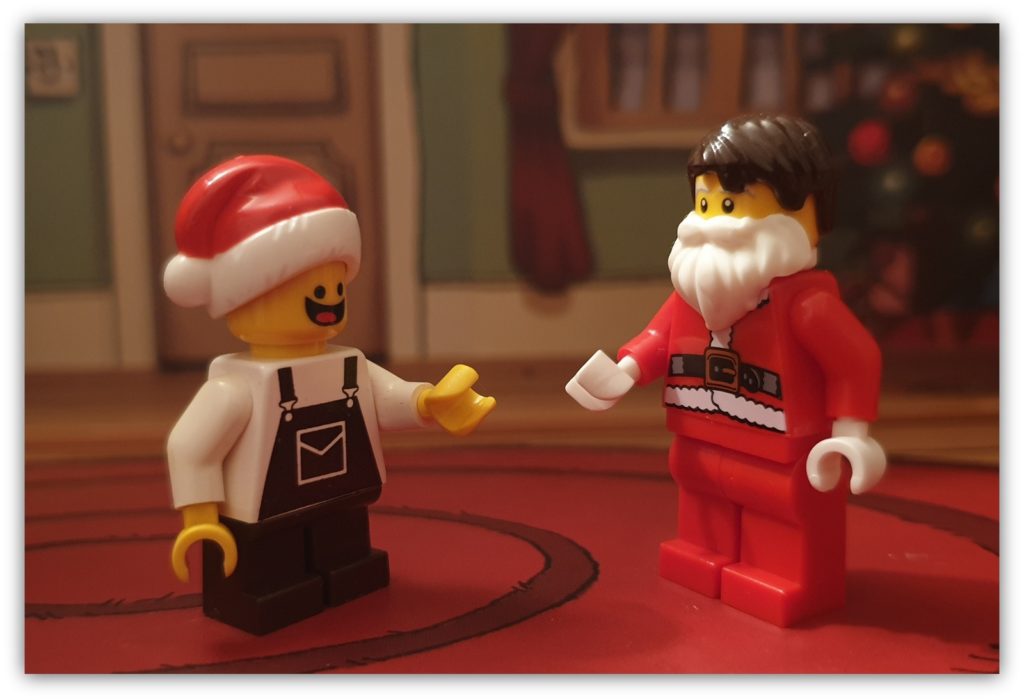 ReeHandro (on the left of our picture) is one of the elder elves, but don’t think for one moment that he’s slowing down any time soon, although I often find that I need to find additional junior elves to help him and LeeHandro as it gets closer to Christmas.

ReeHandro’s job is to read the letter from top to bottom (and you thought only Santa read your letter!). He can then put the name of the child onto Santa’s Good List and send a note to the workshop so that they (the workshop elves) can make the present and get it ready on Santa’s sleigh. ReeHandro’s job is not an easy one though; he knows that not every good boy and girl will be able to get everything that they ask for in their letters. If he can’t deal with a challenging letter quickly, he puts it to one side.

When he has a few of these letters, he takes the letters to Checkmun, a senior elf who can make decisions on what actions to be taken (Checkmun is on the right of the picture). Checkmun may take the letter to someone like me and I’ll make a special trip to see the family and what might be more appropriate. Or, It may be that if the letter asks for something nice for someone else, Checkmun may tell ReeHandro to put both names on the good list and send two notes to the workshop. Quite often, Checkmun may decide that a joint present may be the answer which is why sometimes Santa leaves one big present for both children. 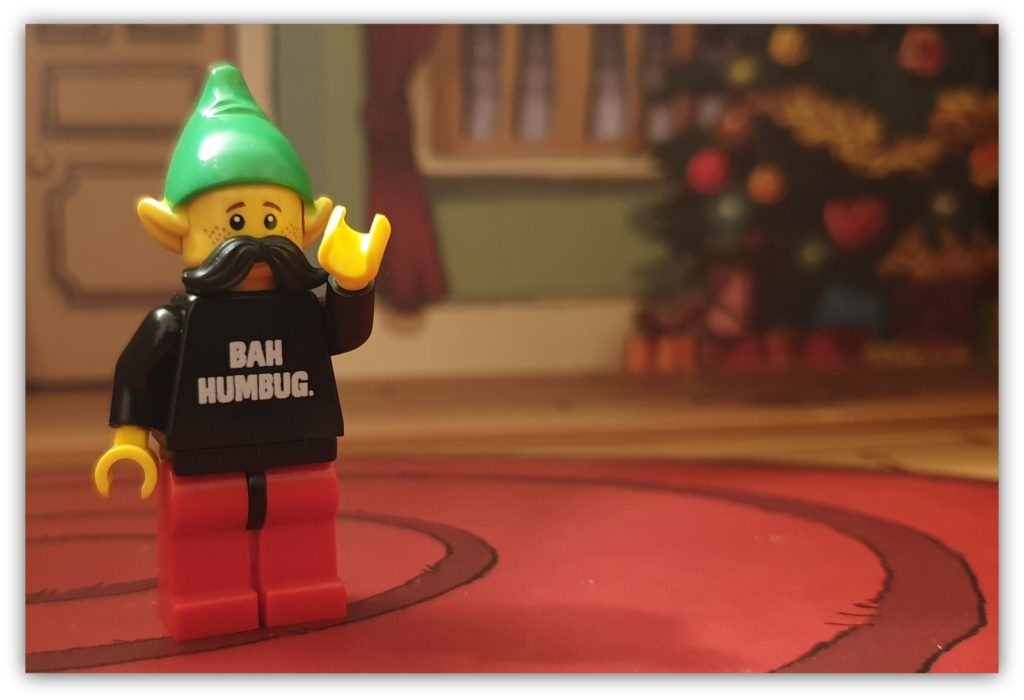 LeeHandro is the brother of ReeHandro. He gets all the letters from the Bad Pile. Now, I don’t know what you need to do to appear on the Bad List (I wonder if Nustrul has to go on special training) but LeeHandro will read the letter and the name is put on the Naughty List. Oh, I do know that each year Santa starts with a clean sheet; in January both Naughty and Nice lists are thrown away.

LeeHandro will also send a note to the workshop. He won’t tell me what he puts on the letters, except that whatever it is it won’t be what was in the letter! 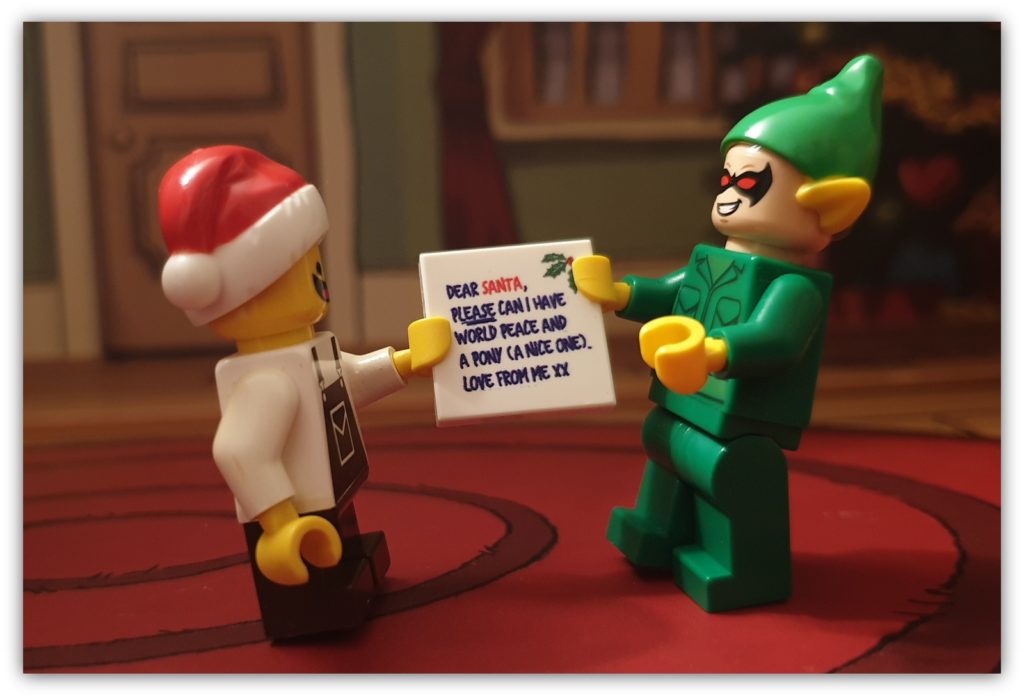 Tallboy is another big elf. His job is to take all the notes from LeeHandro and ReeHandro and take them to the workshop so the workshop elves can get started. Again, because of his size he can take many letters and notes in one go. We did think about putting a computer system in that would record the information and send it over to the workshop quickly; but when we tried to put the system in we found that the elves would work so fast that they would quickly break the computers with their rapid fingers; the elves also complained that the system just wasn’t fast enough for them. It was actually quicker (and cheaper!) to just employ more elves! 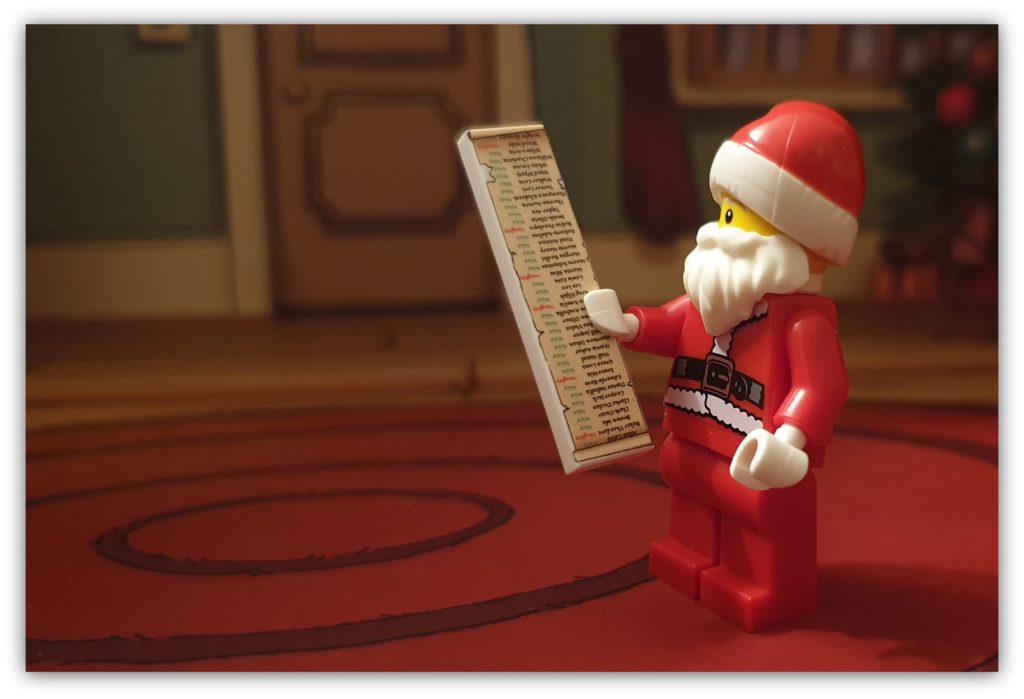 As you’ve probably guessed, Santa’s list isn’t a normal list like you and I know. He has two lists – one for Good Boys and Girls and the other that’s for the Naughty children. But these lists are very special; when Santa looks at your name, he will see the letter that you wrote and the present that LeeHandro, ReeHandro and Checkmun have allocated. And Santa will see and read all that information in the length of time it takes his eyes to look at the child’s name!  Plus, he can quickly call upon the workshop and change the present if he thinks that there’s been a mistake. He can also move children from the Good List to the Bad List in an instant!

Then he makes his way around the world leaving presents for boys and girls. If you want, you can track Santa’s progress online (go to noradsanta.org) and then on Christmas morning you can open your present!

I hope you enjoyed this little look behind the scenes at how we deal with your letter. And when you go to see Santa and tell him what you want for Christmas, be sure to thank the elves for their help; without them Santa would struggle to get it all done!

If you live in the UK and you would like to write to Santa, send your letter to:

As a final note 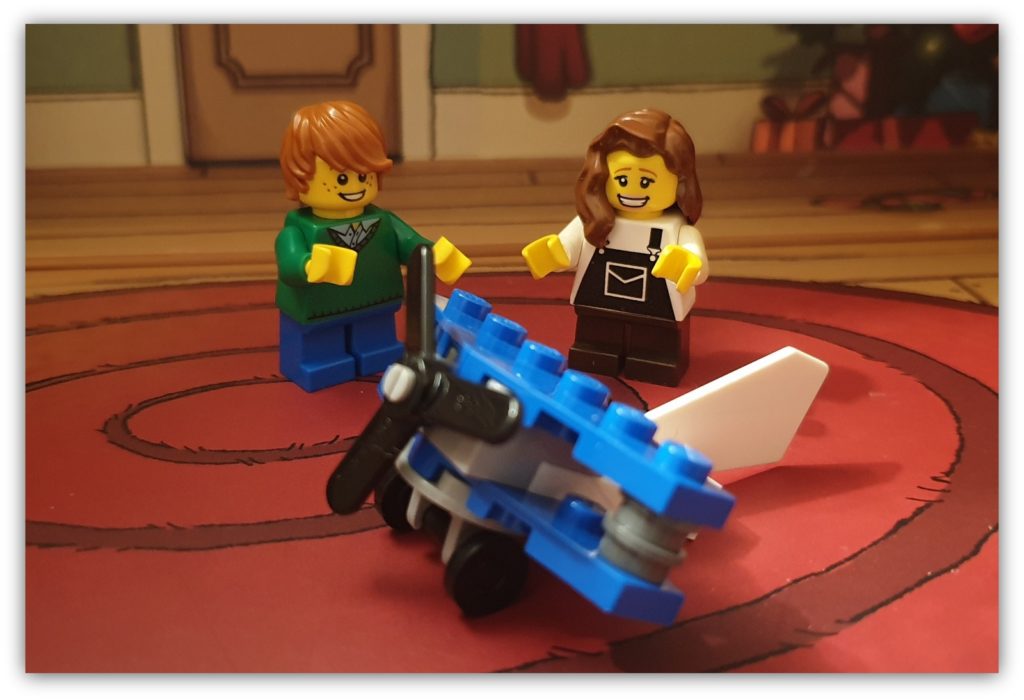 This time of year, we know that people like to make miniature versions of Santa and the elf teams, so this list below might help you make your mini version of me!

LeeHandro: Hat, Head, Torso, Legs  (the torso is a part from an original figure linked here)

Whilst I could find links for the letter and the envelope I couldn’t track down where I got Santa’s list from.

The plane was one of the presents in the LEGO city Advent calendar from a previous year.

Scenery was made using the animation box “The Greatest Gift” by Walker Books and Sainsbury’s.