LEGO is understandably very selective about the intellectual properties – or IPs – that it chooses to ally its own brand with. Not only is the process of attaining rights both time consuming, wrapped up in endless legal checks and discussions, and expensive, but LEGO has a core set of company values that it tries to highlight in its every action, whether that be something as big as getting the construction toy rights to Back to the Future, or responding to children on social media. Some licenses, LEGO will avoid like the plague, not necessarily because of the film or TV show’s quality, but because perhaps Halo is too entrenched in realistic warfare, or because Breaking Bad‘s themes are far too mature for children.

That doesn’t stop fans, of course, from creating their own models and minifigures of their favourite brands, and over the past few years, I’ve found myself dipping into a few franchises, some well-known like the movie Equilibrium and the Percy Jackson book series, others less so, in the cases of web series Critical Role and Korean drama My Girlfriend is a Gumiho. But one that I’ve likely put more effort into than most, and certainly have more to show for, is Power Rangers. 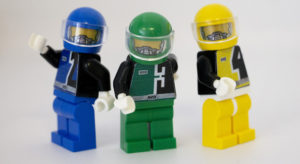 Just like Phil in part 1 of this multi-blog schebang, Power Rangers was something I watched a lot when I was younger – predominantly Ninja Storm and Dino Thunder – and then had a Dark Age akin to what AFOLs describe regarding ‘coming back to’ their love of LEGO later in life. It wasn’t until my late teens, as I was approaching university, that I sat down and decided to revisit the series, and I found something strangely soothing about it. I like a lot of very complex or emotionally-draining TV shows, and it was nice to find something I could enjoy without having to really burden myself with it the way I do with The West Wing or Buffy the Vampire Slayer. Not that I didn’t care about the characters or story in Power Rangers, but they weren’t demanding as much of me, and it was something I could enjoy in the background while animating or doing coursework.

Of course, it wasn’t long before I started looking longingly at my other superhero minifigures and thinking they needed company. There are minifigure parts in all kinds of colours now – why not give it a go?

I decided to start with a simple set of outfits. If you’re new to Power Rangers, every season is a new setting and team of heroes, though they share a larger continuity. Set twenty years in the future, Power Rangers SPD saw its police-themed Rangers battling the Troobian Empire, who wanted to steal Earth’s natural resources to create a terrible war machine. The 5 main suits were perfect: red, blue, green, yellow and pink. I didn’t need to worry about the additional ‘sixth’ rangers for a while (more on them later).

They were standard colours, and a quick Bricklink search showed that the parts I needed existed in those colours. Helmets in particular are a key part; I was concerned there might not be a pink helmet, but sure enough, it exists in magenta!

As for the rest of the bodies, I actually ended up using black bodies and coloured legs, with the torsos’ colours being printed on. What was I printing on? Well, once I knew I was serious about trying to make the SPD team, I went into Photoshop and designed some decals myself! I’m very proud of these, as I created them long before I had any real graphic design experience, and as it turns out, having now printed the green, yellow and blue torsos, the designs actually look pretty good. The decals were applied by my  friend Aaron Good of Brickish Films. 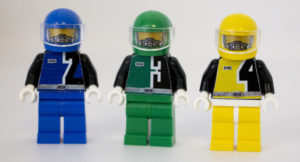 For the faces under the helmets, visible through trans-clear visors, Batman actually came to the rescue! In 76025 Green Lantern vs. Sinestro, there’s a variant of Batman whose head has a printed sci-fi mouthpiece and gold visor. It’s not completely ideal for a Power Ranger, but after reviewing the available sci-fi heads on Bricklink, it seemed like the best option. I may have bought 20. Don’t judge me.

And that was basically it: that was my first proper attempt at custom LEGO Power Rangers. Sure, I’d put a few unmodified pieces together in the past to make the Green or Titanium Ranger, but SPD were my first attempt at actively altering LEGO parts to make a Ranger, and the results were better than I’d hoped for. I still have yet to finish Red and Pink, but that’s more an issue of timing than anything, and in the meantime, I’ve worked on a few other projects…

In every season of Power Rangers, the core team is later joined by new additions, or ‘sixth rangers’. Yes, even in cases like Ninja Storm where a team of 3 is joined by 2 more Rangers, the late arrivals are ‘sixth rangers’. It’s more of an honorific than a strict number designation. In fact, SPD has a lot of sixth rangers, and while I haven’t attempt all of them, some of them were a lot of fun to toy around with. 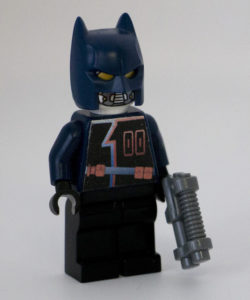 The first was Anubis ‘Doggie’ Cruger. He’s a dog. From space. No word of a lie, the commanding officer for the SPD is an anthromorphic canine whose nickname is ‘Doggie’, but I’ll forgive the show its lack of subtlety because when Cruger gets a Ranger suit of his own, it’s fantastic. He’s designated the Shadow Ranger, getting dark-blue metallic armour, a Shadow Saber, and where the other rangers have numbers 1 through 5 on their chest, his is a blazing-red 100. I had to make him. Just had to. So I designed another decal and had it applied, and this time, I used a whole Batman head in dark blue to give the effect of Crugers’ ears, which are visible on his helmet. It looks great, fitting the style of the others in the series well while being distinctive, though part of me will always see that helmet as Batman’s, which can’t be helped.

The second (and currently final) addition to my SPD lineup isn’t strictly speaking a real Ranger. He appeared in a dream sequence, when Boom – who tests the Rangers’ new weapons – dreams of being a Power Ranger himself! His bright orange suit was too adorable to pass up, so I’ve added him to my LEGO team for good measure. 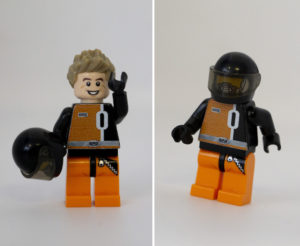 And that, dear readers, is my exploration into the world of LEGO Power Rangers thus far! Do I have plans for future minifigures and MOCs? I surely do! It would be great to make some minifigures of other teams, especially Dino Thunder and Jungle Fury (I’m currently working on a cosplay of a character from the latter, so it would be strange for me to ignore a LEGO tribute too), plus a few ‘original’ team ideas that I have up my sleeve. And of course, if I can find the time and the funds, I would love to have a go at building a Megazord. It’s a tantalising prospect, but one I will have to shelve for now while I pursue other, less-demanding projects.

With Power Rangers as a franchise gaining traction in the past few years, through new books, comics and a film, I hope to see more in the LEGO community attempt their own Rangers, Megazords, and monsters, from any season. After all: bright colours? Strange creatures? Superhero action? LEGO and Power Rangers sound like a match made in heaven.

A LEGO Wishlist: Which Minifigures Should LEGO Have Made?