A magical new collectible minifigure series has arrived and it is absolutely incredible! The LEGO Group has released the Harry Potter CMF Series 2 minifigures and each mystery bag contains 1 of the 16 different characters. There is an amazing character lineup for fans of the theme to display and play out their favorite scenes from the books and movies. Along with this, each character has some great accessories, and there are some brand-new parts that have been introduced with this series.

You will be able to find these collectible minifigures in stores now and they also available through LEGO online. 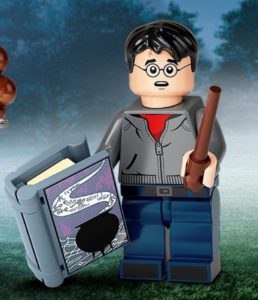 No Harry Potter set would be complete without the main character himself. There are 43 different minifigures of Harry Potter featured in the theme, one of the main things that I love about this many figures that LEGO have created a new version which is featuring a teenage Harry in his outfit from the sixth movie, The Half-Blood Prince. Harry comes with the Advanced Potion Making book which has a nice new print of a cauldron on the front. 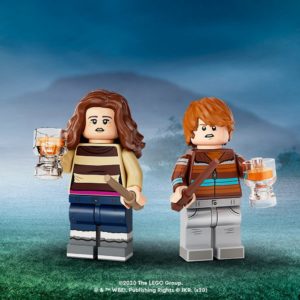 Where would Harry be without his two friends? The Harry Potter CMF Series 2 keeps the team alive with Hermione Granger and Ron Weasley. Both minifigures are wearing casual outfits again featured in the sixth movie. The scene from the movie where these outfits are featured is where the three Hogwarts students are in a pub called The Three Broomsticks. In the pub, people can order a drink called a butterbeer. This drink is a new LEGO piece. Both minifigures come with the normal wand and a glass of butterbeer. I found this new accessory to be absolutely brilliant. It is nice to see LEGO making new minifigure accessories that can be used in MOCs such as pubs or restaurants. 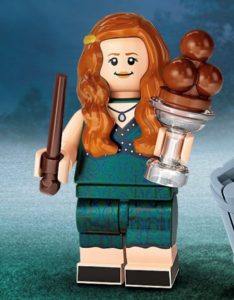 It’s great to see some of the Weasleys becoming new minifigures. I especially love the new Ginny Weasley minifigure wearing her outfit from the Slug Club party she attended at Prof. Slughorn’s office. Ginny comes with another new piece of glassware that looks like a martini glass. In the movie this is actually a dessert that is served at the party which looks to have some sort of chocolate pastry in it. 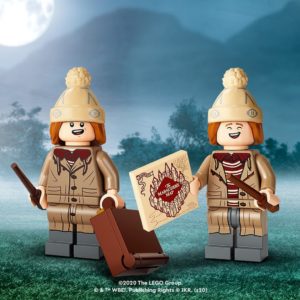 The Weasley twins are wearing their winter outfits from the movie “The Goblet of Fire”. I really like how the LEGO designers have made the the effort to make each twin different. Both twins are wearing the same outfit however Fred’s outfit has the coat buttoned up whereas George’s is left open. Both of the many figures also have different facial expressions to help identify which twin is which. Notably, there is also a new bobble hat which is another new mould for LEGO.

Along with these little touches each twin comes with a different accessory. Fred holds a briefcase which when opened up becomes the twins’ gambling booth for the Triwizard Tournament. The inside of the briefcase also has a new print showing the four names of the tournament competitors. I found this to be a wonderful touch to show the twins’ entrepreneurship.

George comes with the Marauder’s map which he gives Harry in The Prisoner of Azkaban movie. What is quite interesting about this 2×2 printed tile is that it is the third Marauder’s map LEGO has designed. Recently LEGO released the Hogwarts Students Accessory Set (40419)

which has an exclusive 2×3 tile of the Marauder’s map opened up.

One of my favorite characters in the Harry Potter CMF Series 2. Luna is wearing her normal casual outfit but to show her support for the Gryffindor Quidditch team. This minifigure features a special new accessory part, a lion headpiece. It is quite a unique piece for LEGO to create and I wonder what else it could be used for in the future apart from a possible lion costume minifigure in a future collectible minifigure series. One of the things that I absolutely love about this minifigure was that LEGO has included a blonde ponytail hairpiece so you can switch from Luna in lion mascot form to a normal Luna minifig. 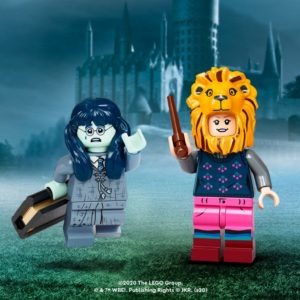 After being a fan of the LEGO Harry Potter theme for many years and collecting the sets I always wanted a Moaning Myrtle minifigure but I didn’t think it would happen since none of the original sets featured this character. So I am overjoyed with her being available in this collectible minifigure series. Moaning Myrtle is the ghost of Myrtle Warren, a girl who has haunted the second-floor girls’ bathroom at Hogwarts for many years. Myrtle comes in ghostly sand blue parts. I thought was quite fitting to the character as she is often shown as crying or sulking. She also comes with a book which is known as Tom Riddle’s diary. The diary was also featured in the Harry Potter CMF series 1 as an accessory with the Dobby minifigure. However, this diary is the version before Harry destroyed the book whereas the one featured with Dobby has a print to show a hole through the middle of the diary.

This minifigure is another favorite. It is great to see another character from the Wizarding World becoming a minifigure. Kingsley is a minister from the Ministry of Magic. Kingsley’s minifigure looks great and has a new printed hat and also features a blue fabric piece for his robes. The simple print on the torso and legs also look really nice, but it is a shame the fabric piece covers it.

The only thing that lets this minifigure down is the accessory. Kingsley comes with a dark brown broom which every wizard and witch needs but I feel like LEGO could have given him something a little more exciting like the other minifigures have. 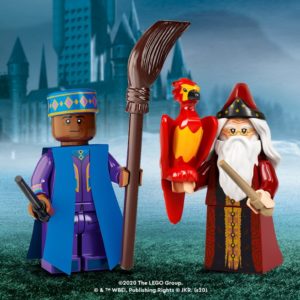 Another favorite minifigure in the Harry Potter CMF Series 2 is Dumbledore. I enjoy seeing how LEGO makes detailed parts for Dumbledore’s robes and this one has not let me down. His red and gold robes have a nice detailed pattern on the front and back. The minifig also has a new hat/hairpiece detailed with small gold stars. Dumbledore also comes with a molded Fawkes the Phoenix. Fawkes has not been seen since the original run of the Harry Potter theme back in 2002 in The Chamber of Secrets set (4730). In most recent sets Fawkes has been a brick-built phoenix. 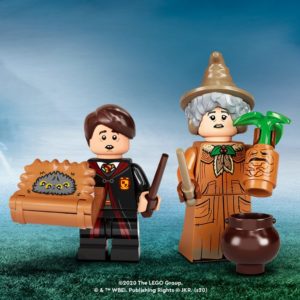 Neville’s new minifigure is a little basic however the accessory that comes with him is absolutely brilliant. The minifigure has a new closed robe torso print which is a nice addition to the Gryffindor uniform torsos LEGO has released so far. Neville has the medium legs which I thought was a bit strange since all of the other student characters all have long legs. His accessory is the Monster Book of Monsters which looks great. It uses the book pieces that can open up but with the addition of having a front cover with fangs molded around the edges and a print with eyes and fur. It also has a white slope brick to be put inside which has some scary monster teeth printed on the side.

Griphook is the goblin worked at Gringotts Wizarding Bank in Diagon Alley. Not one of my favorite minifigures however I am glad LEGO decided to put him in this series. He’s mostly memorable for attempting to help Harry Potter destroy one of the Horcruxes then betraying him like a goblin would.

Griphook looks very much like his movie counterpart. He wears a striped shirt and waistcoat and also features the short legs. Probably the most exciting thing about this minifigure is his accessories. He comes with a key that opens the bank vaults but also he comes with a brand-new sword piece. The sword piece is known as The Sword of Gryffindor which is a thousand-year-old sword owned by Godric Gryffindor, one of the four founders of Hogwarts School of Witchcraft and Wizardry. This accessory is incredibly detailed with what looks to be dual molded  flat silver and transparent red gemstones. It is quite a lovely looking piece for a small accessory and possibly the first time LEGO has made such a detailed weapon. 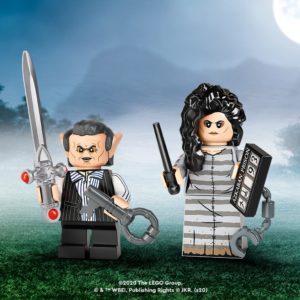 My all-time favorite Harry Potter villain, Bellatrix. I love this minifigure and I am so happy LEGO has given us another one of Bellatrix’s outfits. The minifigure torso and skirt piece is based on the Azkaban prisoner uniform. Printed with dark grey stripes on the front, back and arms. The accessories she has are some handcuffs and a 1×2 tile featuring her prisoner number.

This is the third Bellatrix minifigure LEGO has released. I am really happy the character is more available to people instead of the very rare 2010 minifigure that came with The Burrow set (4840). 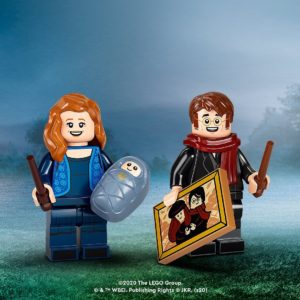 These two minifigures are wonderful. Although the parents of Harry Potter were killed at the hands of Lord Voldemort, Lily and James still play a key role in Harry becoming a wizard. It is really great of LEGO to finally give us these two characters as minifigures.

Both minifigures seem to feature outfits from the resurrection scene in the seventh movie, The Deathly Hallows Part 2. James is wearing a long black coat. This minifigure also has the addition of a red scarf piece (since it was probably cold in that scene). Lily has a nice floral printed blue waistcoat with a dark blue dress underneath.

Lily’s accessory is very sweet as it is the baby version of Harry Potter featuring a printed ‘H’ on the wrap. It would have been great for LEGO to use the new baby minifigure but they have used the wrapped up baby which has been used in Friends sets, the Tribal Woman, Series 15 CMF, and even as baby Voldemort in The Rise of Voldemort set (75965). James comes with a 2×3 tile printed with a lovely portrait. The portrait is seen in the movie in a photo album which is given to Harry by Hagrid at Hogsmeade Station.

What a Magical Minifigure series!

In all, this is another brilliant minifigure series from The LEGO Group. The variety of characters is brilliant and it is good to see that LEGO didn’t duplicate any of the characters (in the Harry Potter CMF Series 1  there were two Harrys). There are some really cool new accessories included too, especially the new glasses and books have definitely been my favorites. My top three minifigures in the Harry Potter CMF Series 2 will definitely be Moaning Myrtle, Professor Sprout and Dumbledore, but Luna gets an honorary place, too, for that lion head piece. What are your favorite parts and minifigures? Let me know in the comments! 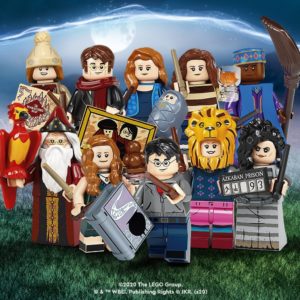