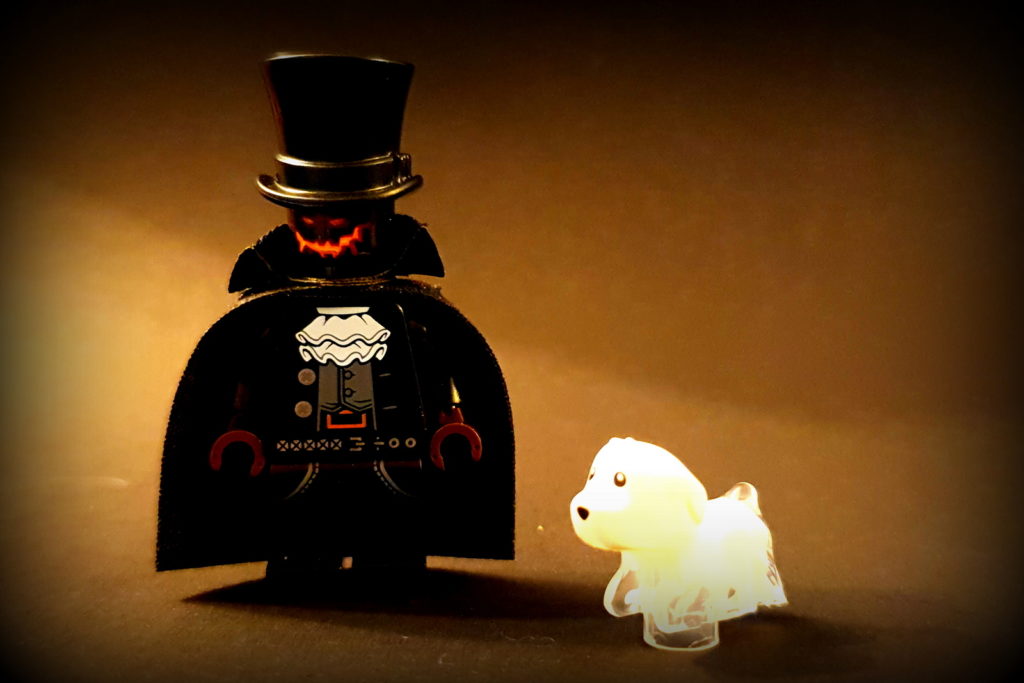 Oh, welcome; you found me in this dark corner of the room! Let me tell you this article isn’t for the faint of heart; I will tell you tales of myth and legend; and show you images of things that will make your hair go all curly and your skin go white; or at least I hope will be a little interesting for a while. Ladies and gentlemen, please welcome the LEGO Creatures of Halloween! 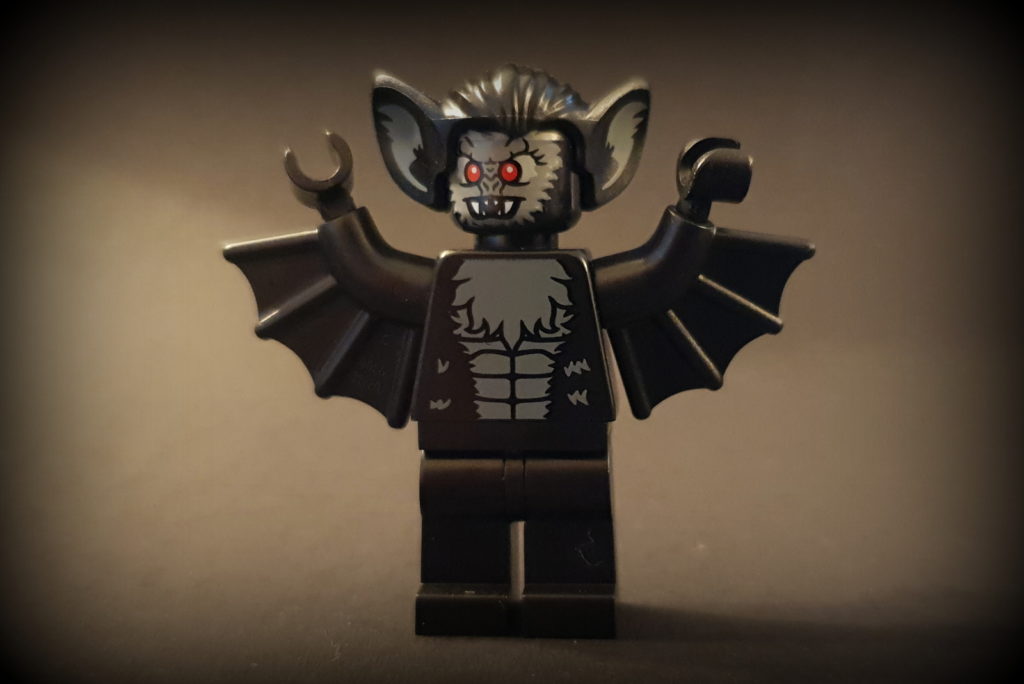 Na-na-na-na-na Man Bat!  The creature above is the Bat Vampire from Series 8 Collectible Minifigures; but a Bat Monster was released in the Monster Fighter series which was pretty much a brown version of this figure!

The Man Bat (nope, not the other way around) was part of the DC comic universe and was one of Batman‘s adverseries. By taking a special bat formula, Kirk Langstrom could transform himself into a bat-like creature. By taking an antidote or if the bat-gland formula wears off, he can return to human form.

Not scared? Then how about… 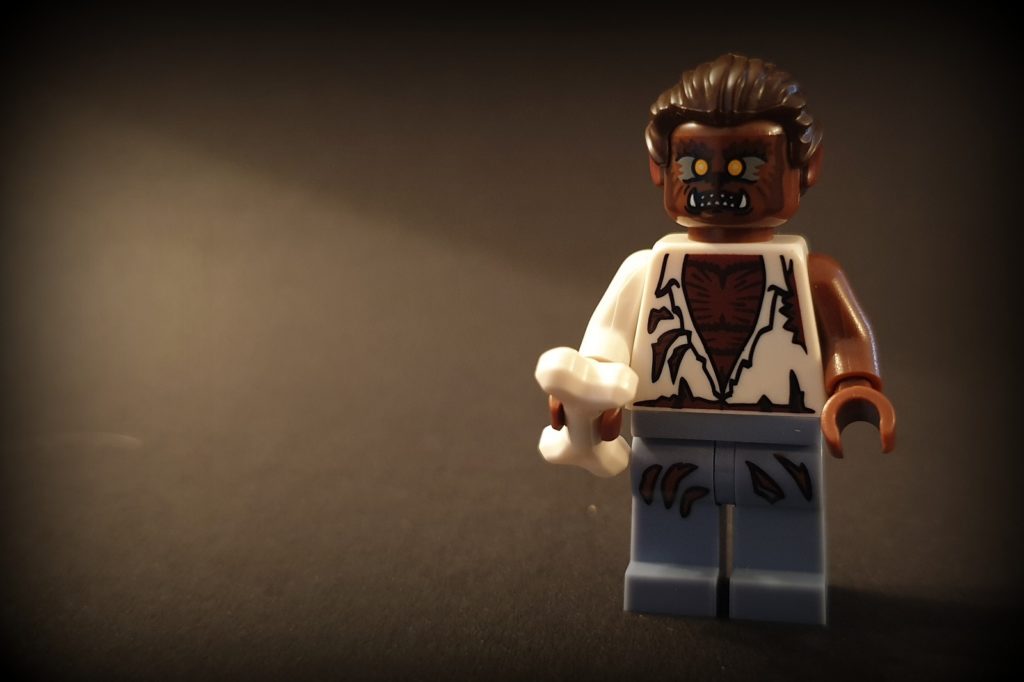 This figure appeared in the earlier series 4 CMF.

Werewolves have been part of European myth and legend for many, many years, with references dating back to before 1200CE! The myth of the werewolf is the human who transforms into a wolf either purposefully, being placed under a curse or just because it is the night of the full moon.

Whilst (in theory) we are smarter than we used to be, back in the 1500s through to the 1800s some people actually believed that people could actually turn themselves into wolves; or that others could cast spells to make people turn into wolves; the witch hunts and witchcraft trials did include the occasional trial. 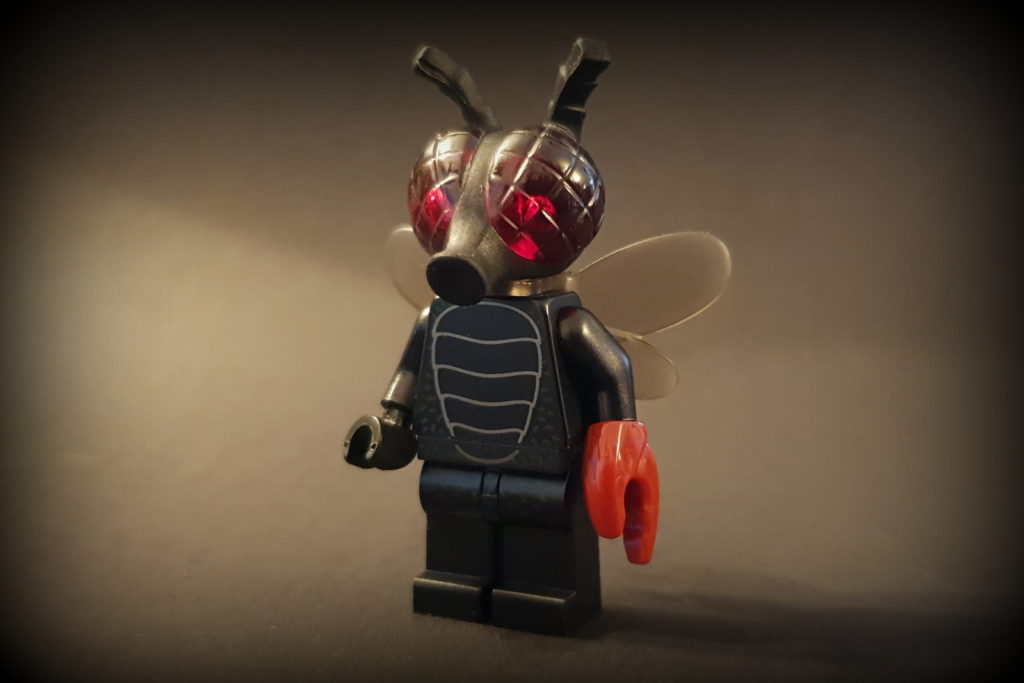 Series 14 of the CMF brought us the most “delightful” of LEGO creatures, the Fly Monster.

You may be aware that in 1986 Jeff Goldblum starred in the film “The Fly”; which begins with a scientist working on teleportation. After testing on several things, he decides to get into the chamber; as he does so a fly enters at the same time. It’s a pretty gruesome film, so I’ll let you decide if you want to carry on with that. But the 1986 film was a remake of the 1958 film (which in turn came from a 1957 short story); the original film is still a horror flick, but in the cheesy way horror films were made back then. Interestingly, Rotten Tomatoes scored the original 95% to the remakes 91%; but IMDB went 7/10 to 7.5/10. 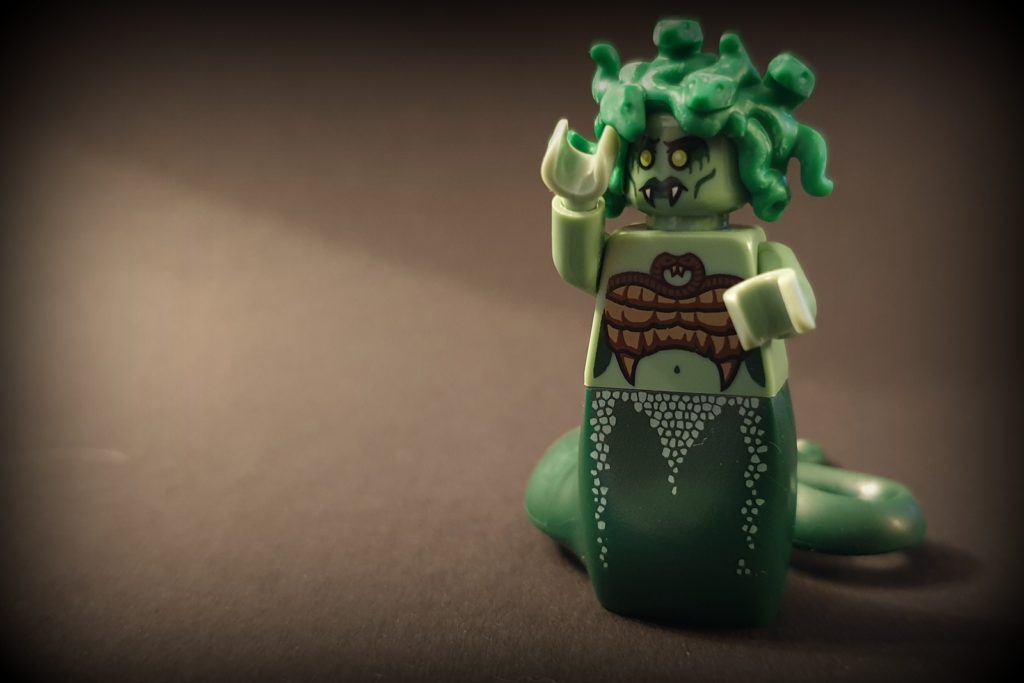 Series 10 of the Collectible series brought us this monster from Greek mythology, Medusa. According to the stories, she could turn people to stone if they should look at her. Perseus was challenged to kill her, which he did, by using a mirrored shield to see where he was going.

The legends describe Medusa as being a winged human with venomous snakes instead of hair. Interestingly, it seems LEGO used the Medusa version created for the 1981 film Clash of The Titans. Personally, I’m a bit of a fan for the works of Ray Harryhausen (he was a stop motion designer who created some brilliant monsters for films), so this is a nice figure to honour the man. By the way, the reason for not including the wings in this film version seems to be simple; it would have made the stop motion even more complicated to do! 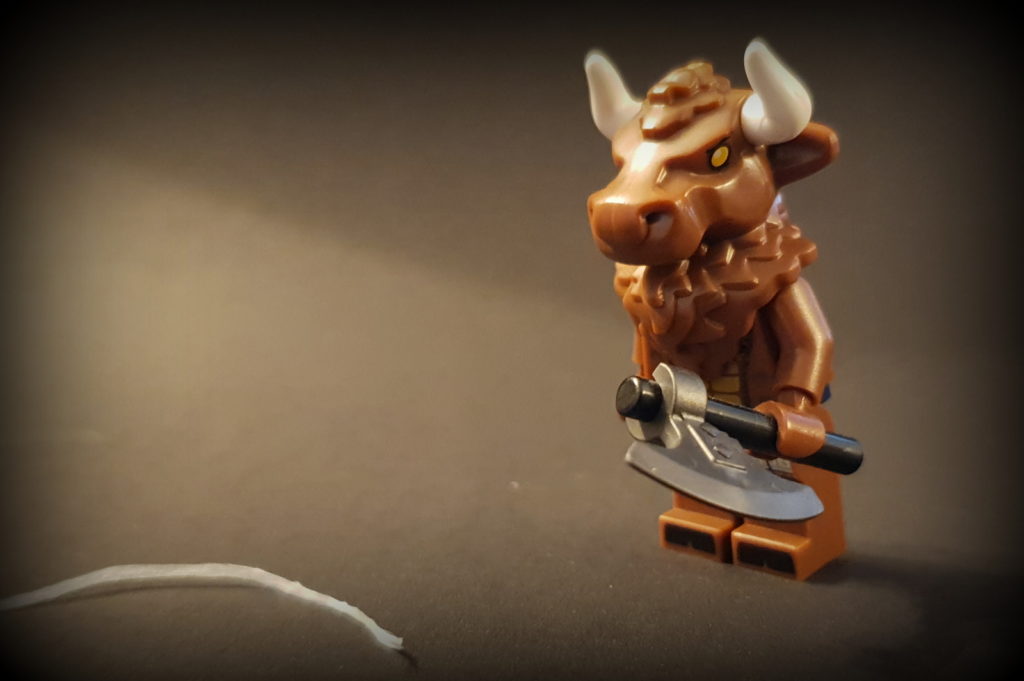 Another CMF, this one from series 6! The minotaur is another creature from Greek mythology. The name comes from a combination of Minos (at the time, the King of Crete was called Minos) and bull; in Crete itself it was known as Asterion. How this half-bull/half-man came to be is a typical Greek backstory, but the bull was made to live in an elaborate labyrinth which was designed to be so complex that Asterion could not get out, nor could anyone going in. Apparently fed by human flesh, he stayed there until Theseus decided that he’d had enough of the sacrifices. Using a ball of string, tied at the entrance, Theseus found the Minotaur and killed him. He then used the string to come back out.

One thing that is interesting is that archaeologists discovered the ruins of Minos’ palace; however, they did not find the labyrinth. However, the palace had enormous rooms, with many staircases and corridors, leading some to suggest that the labyrinth could have been the palace itself. Even if that has been discredited, some scientists think that the myth may have come from geology; back at that time there was a lot of tectonic activity in the region and that the Minoans might have used this myth to explain the earthquakes bellowing beneath their feet.

There is one last point to this story. Much is made that the Minotaur was put in a labyrinth, not a maze. A labyrinth is not a maze; sure, it may twist and turn but there is one way in (and out) and no confusing branches; a maze will have plenty of dead-end branches. 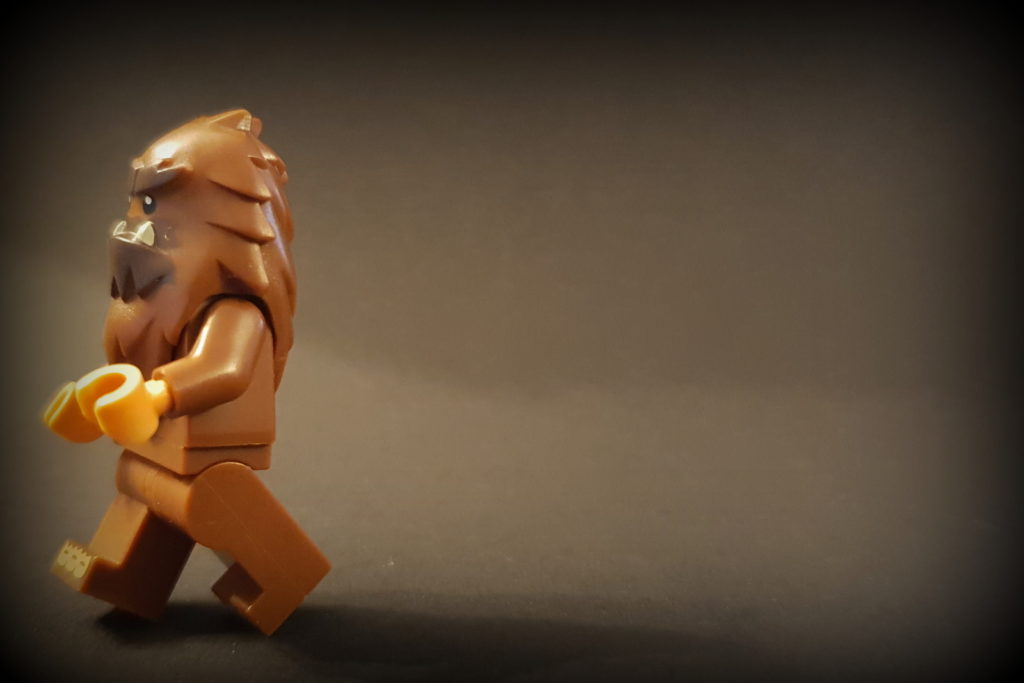 Series 14 brought us the elusive Big Foot (amusingly called Square Foot in Brickset). From a LEGO perspective, this was very similar in moulding to the Series 11 Yeti figure.

The Big Foot creature is a North American mythical beast, apparently the missing link between humans and the ape-like creatures that went before. The footprints that prove the existence are usually about 60cm long and 20cm wide; some casts have also contained claw marks, suggesting that they came from something like a bear. Generally, the cultural tales warn children about going off on their own, or making a noise at night, less the Big Foot would come and take them away and, of course, kill and eat them.

There have been many people who have claimed to see Big Foot, and in 2008 Rick Dyer and Matthew Whitton claimed to have found one frozen in a block of ice. Several press outlets covered this finding. However, when the ice thawed it was discovered that the hair was not real, the head was hollow, and the feet were made of rubber! 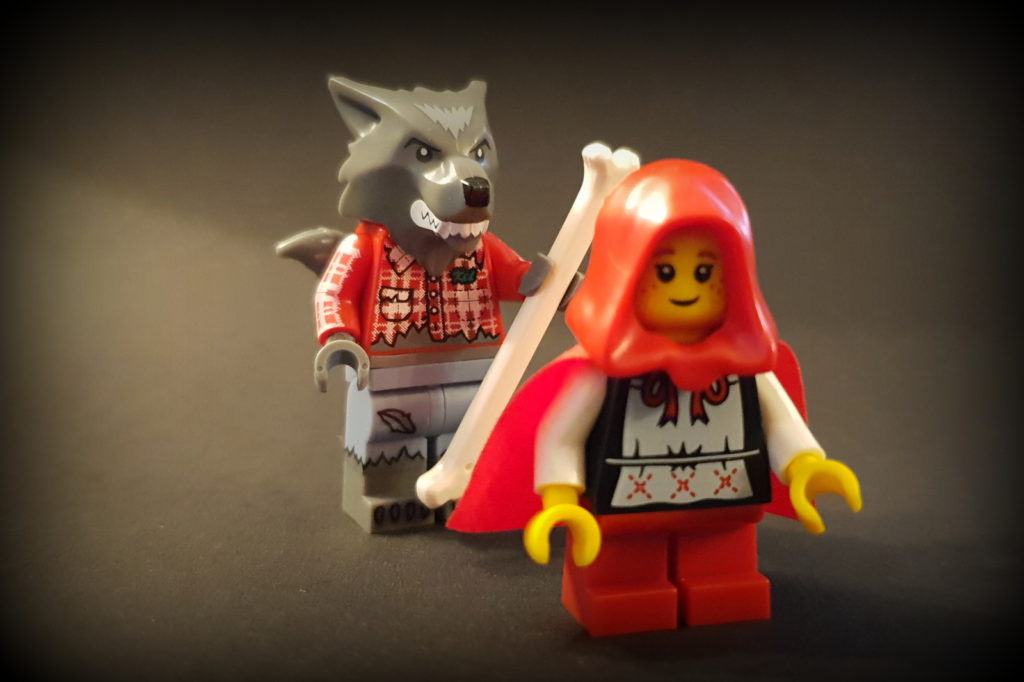 Series 14 brought us “Wolf Guy” in 2015, who in turn was very similar to the werewolf in the 2012 theme Monster Fighters. What’s more curious is his striking resemblance to the Lumberjack from series 5! In true story telling tales, little Red Riding Hood (actually “grandma visitor”) had been released as part of series 7.  I’m making the distinction here because the actual figure of Little Red Riding Hood appeared in the 2018 Ideas set of the Pop-up book.

The story is well-known, having been told in one form or another since the 1600s (in one format it was known as “The false grandmother”). It has even been linked to Greek stories, too. What I love about this is the different versions that this story has.  In one version, when the wolf says “All the better to eat you” he does, and the story ends there! In another, the wood cutter (or hunter) capture the wolf, but fill him with rocks and stones, and then he can’t move and dies. Oh, and depending on whether you’re reading the children-friendly version or not the grandma either lives or dies to. They don’t write children’s stories like they used to! 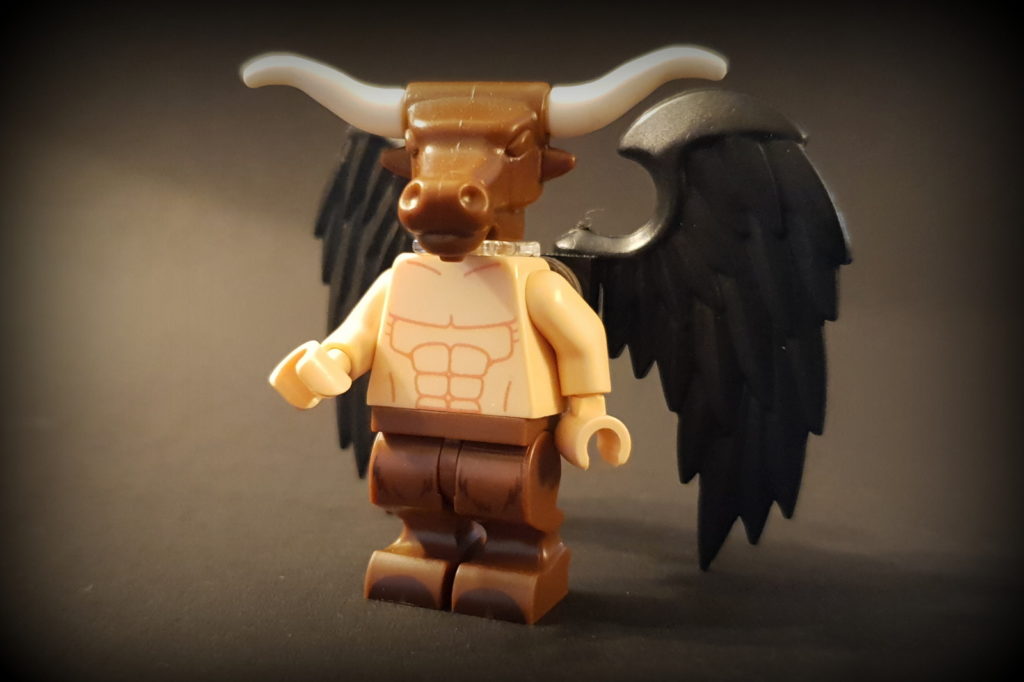 The last figure in this collection of horrendous LEGO creatures is Baphomet. This is a custom design figure is made by Firestartoys. This is possibly the most controversial in this article, and again history has had this figure play on both sides of good and evil.

The earliest reference to Baphomet was in 1307 during the trials of the Knights Templar, a catholic military order that existed between 1119 and 1312. The story of the order is fascinating and some of its myths, stories and customs continue today. In the trials, reference was made that the Templars worshipped this monstrous creature; this is the basis for speculation to why the Templars were disbanded. Other historians note that as many of the Templars fought in the Crusades, they may have incorporated Islamic beliefs into their practice. It was suggested that Baphomet is in fact a corruption of the old French word for Mohammed.

But how Baphomet looks is down to Eliphas-Levi who drew the creature we see in 1856. Whilst the intention was to create something that incorporated everything (good and evil) in his occult books “Dogma and rituals of High Magic”. This image in turn is very similar to the design used to represent The Devil in the Tarot deck (and as with so much in tarot decks, what you see isn’t what it means).

Of course, with such a powerful image, it has been used by occultists and Satanists (and metal bands) for many years since.

I hope that you found this trawl through the LEGO creatures that have been produced interesting.  What I discovered is that the older the tale about the creature, the weirder and horrifying its tale was – if indeed it was true! But then that’s the thing about myths and legends, it’s about telling a story that uses hooks which make sense, before delving into the dark….!

LEGO Hair: Getting the Look Right