When LEGO revealed its first Harry Potter CMF series I couldn’t have been more ecstatic. Twenty-two beautifully detailed minifigures, each depicting a character from one of my favourite film franchises. This would be the first Collectible Minifigure series that would lighten my wallet and I couldn’t have been more excited to part with my hard earned cash. But alas, it would not be so easy.

My adventure began on the 2nd of September, a mere day after the series was released. The first hurdle to overcome was finding a shop that stocked LEGO Minifigures. Although I love the UK, I deeply envy the large superstores that can be found in the United States. Target and Walmart both seem to have huge toy isles with a large section of shelf space devoted to the humble LEGO brick. In England, few supermarkets are large enough to even warrant a toy isle, let alone a LEGO section. I decided to drive 22 minutes to the largest town in my vicinity, knowing that Tesco’s had a sizeable kids section. To my bitter disappointment, no LEGO Harry Potter CMF bags were to be found.

It was then I had an unfortunate lapse in judgement. Rather than leaving my quarry for another day, I decided to venture into the nearby Argos. To my delight, Argos had them in stock. However, unlike any normal shop, Argos makes you order your items online before you are allowed to collect your purchases at the store front. Unwilling to fork out for blind bags that I wouldn’t be able to feel, I ordered a conservative three. The delivery lady brought me a couple of random bags. When I asked, she brought the box over to me so I could feel the bags and buy some more.

In theory this was ideal, in practice the experience was quite traumatising. I had to stand at the till, feeling through bags as the lady behind the desk stared disapprovingly at me. She clearly thought that feeling the bags was cheating. It quickly became apparent people were staring. Other people were reluctant to come to the counter as they thought I was still being served. Never keen to be the centre of attention, I relented, returning the box to the lady behind the desk without purchasing another bag. 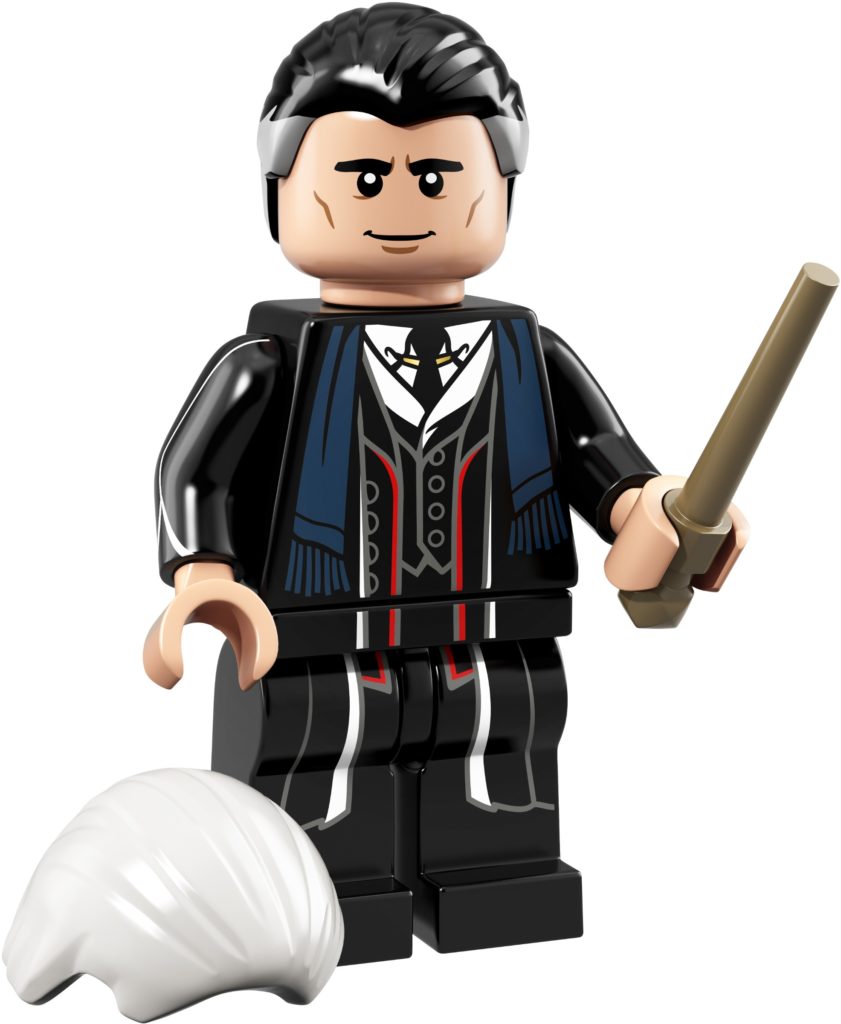 Blind Bags aren’t dissimilar to Berty Bots every flavour beans. They come in every flavour, with some being much more desirable than others. Unfortunately for me, the three bags I purchased at Argos were comparable to vomit flavour.

More desirable figures were scattered sparsely among the boxes. For example, only two Luna Lovegood figures were included in every box. There was only 1 Percival Graves figure in every box of 60. At the time of release many eBay sellers were selling Graves for as much as £60. Finding Graves would be similar to winning a LEGO lottery.

However, I wasn’t so lucky. The first figure I opened was Jacob Kowalski, the loveable baker from Fantastic Beasts and Where to Find Them. The figure itself is accurate although it lacks any special detailing such as arm printing or dual moulded legs. I was mainly disappointed as the figure was one of the more common in the series. Professor Filius Flitwick and Mad Eye Moody were equally common so I was a little disheartened to pull them out of their respective blind bags.

Overall, I was pleased with my purchase, although somewhat disappointed not to have got one of the more desirable figures like Dumbledore or Harry. These three bags had given me a thirst for minifigures that needed to be quenched. 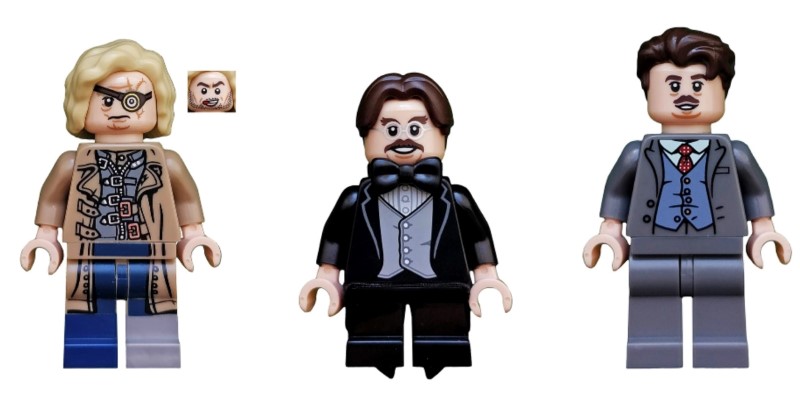 To satisfy my desire for more minifigures, I decided to visit the independent toy shop in my town. With hindsight, this should have been my first port of call. To my delight there was a box of LEGO Harry Potter CMF sitting on the counter, however it appeared to have been ravaged. My chances of finding the rare Percival Graves seemed nonexistent.

Unlike the assistant at Argos, the shop keeper at my local toy shop proved to be a delight. She was more than happy for me to feel through the bags and even lent a hand. It turns out there’s an art to feeling Minifigure blind bags. What I once thought to be fairly simple task proved to be extremely challenging. Without a way to mark the bags it was very difficult for us to remember which figure we attributed to each of the bags. Things weren’t helped by the fact we had to clear the kiosk every 5 minutes or so to allow fellow customers to make their purchases. 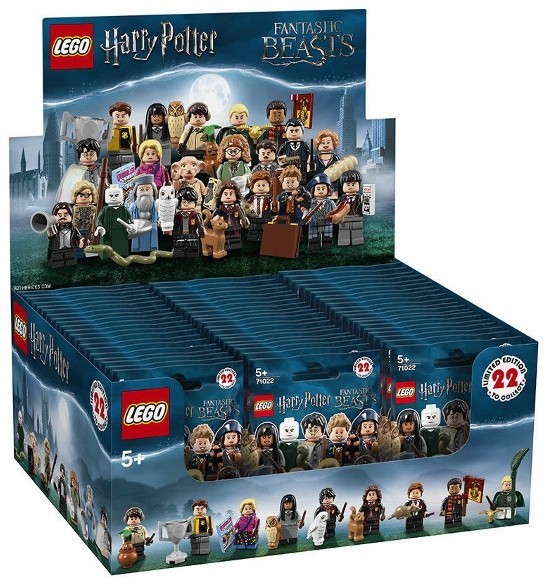 Whilst talking to the shop keeper she revealed that LEGO had sold out of the figures online, stating she only had one more box. I quickly asked if I’d be allowed to open the new box. She kindly agreed and went to the back of the shop to retrieve the unopened crate of figures. Whilst around the corner, I googled strategies for hunting LEGO Minifigures. It was then I struck gold. A crib sheet. A list of where each figure would be within the box. No more feeling bags. No more guessing. I could simply count through each column and grab the figures I coveted.

When the shop keeper returned, I was quick to collect the figures I needed from each specific spot. Unfortunately for me, maths had never my strong suit. I was cruelly reminded of this fact when the shopkeeper charged me for twenty one blind bags rather than the nineteen I was expecting to pay for. Clearly, I had made some sort of counting error.

Upon returning home, I began to open my figures. I instantly struck gold, constructing the rare Percival Graves figure that I had so desired. The next ten minutes were pure bliss. Constructing figure after figure was remarkably satisfying.

Around bag twelve, my poor maths began to hurt. I began getting duplicates. A second Flitwick. Then a second Mad Eye. Then a second Draco Malfoy. A second Cedric Diggory. Even a second Jakob Kowalski. After opening twenty-four bags I was missing three figures. I resigned myself to purchasing these online. Although the sellers charged more because they had opened the packets in advance, it removed the hassle of going into a physical shop and feeling bags.

Currently, I’m proudly displaying the series of minifigures on my wall in an old printer’s tray.

If the heavily rumoured second Harry Potter series comes to fruition, I will have to consider buying all the figures online. Whilst I won’t get the same sense of adventure, I will almost certainly get the same amount of joy, just without any of the stress. The little extra spent may well prove worth it.

Are you excited for the rumoured second LEGO Harry Potter Series? Do you have any stories about collecting LEGO blind blags? Please share your thoughts in the comment section below. 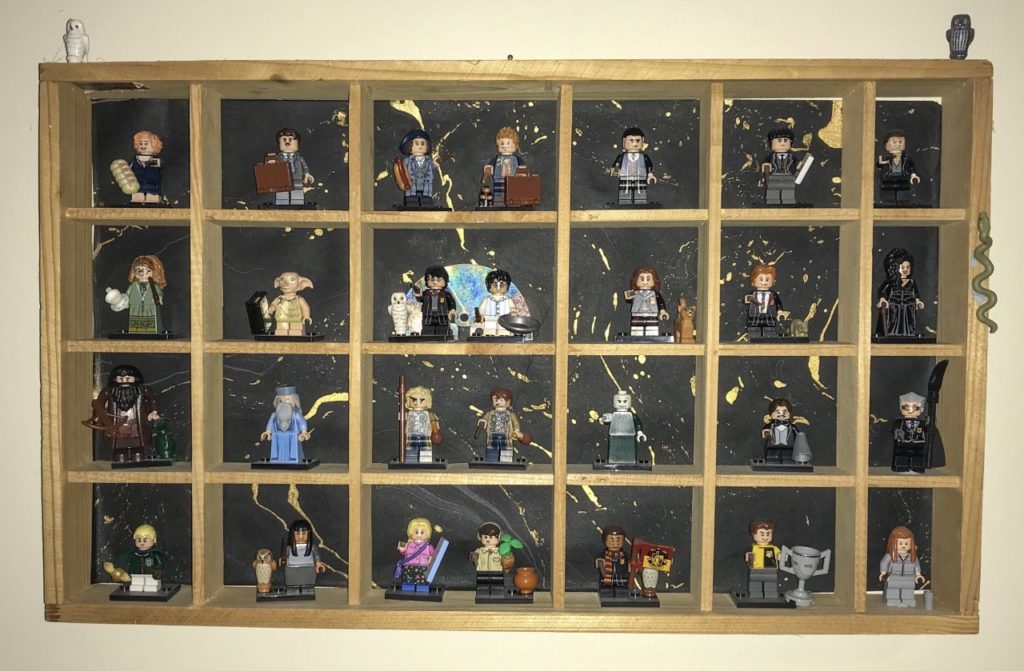