With the release of the new Hidden Side sets last month and this being the month of Halloween, I began to think about some of the creepy and scary monsters LEGO have brought out of imagination and in to reality! So here we are, taking a closer look at some monstrous minifigures.

Monsters can come in many forms. We have classic Hollywood monsters that have risen from the dead like Frankenstein, Dracula, the Mummy and more. Through the years of movies and televisions all sorts of monsters were created. From monsters that come in the form of people who have transformed to monsters brought in to reality through the imagination of children playing what should be an innocent board game.

LEGO have brought us so many “grown up” monsters that probably shouldn’t be for children. But a lot of the creatures turned in to monstrous minifigures by the LEGO Group have a connection to adults around the world from their childhood when maybe movies were in black and white and the scary monsters were nothing but people dressed up in masks.

Ahh the classic zombie. I first encountered this creature when I was in my teens. The first Resident Evil game was released on the PlayStation. Now I did know of movies like Evil Dead and From Dusk till Dawn, but this was the first time I really knew what a zombie was!

A zombie is typically an undead human but animals can also become zombiefied, so look after your pets to keep them safe!

Strangely for a monster that feeds on humans, LEGO doesn’t seem to mind adding them to their roster of minifigs. There are 7 minifigure zombies to watch out for! Back in 2010 the first zombie raised from the dead was in the first collectible minifigure series. He came with his own shovel to dig his way out of his grave and he also had a chicken leg (which hopefully means this zombie doesn’t eat other minifigs).

Two years later… three more zombies spotted in the world of LEGO this time as part of a new theme called “Monster Hunters”. There was a bride, groom and a chauffeur zombie all trying to enjoy the big undead wedding of the century. Sadly this theme was short lived like the zombies. I would love for the LEGO Group to bring back the theme. However they have recently released the new Hidden Side sets which are equally as scary!

In 2014 LEGO had another zombie incident where three more of these scary monsters escaped and managed to get in to the Monsters collectible minifigure series. The unleashed zombies came in the form of a Pirate, Cheerleader and a Businessman zombie. These zombies all seemed to be rather happy to join the minifigure world and the possibility of the zombie plague spreading had came to an end. 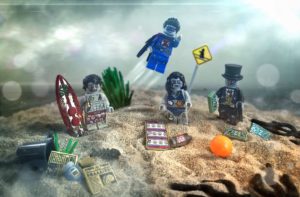 Unofficially there have been other sightings of zombies in other locations like the office of MinifiguresHQ and the FireStarToys headquarters. According to local zombie news there are rumours the zombie population has been increasing and these two companies could be behind it. The zombies spotted escaping the buildings have been said to be enjoying their after lives a lot!

Where Lord Brainsworth seems to be flashing his zombucks around the local party areas. Zombieman has been spotted teaming up with Superman to save the world from the destruction that happened after Taco Tuesday. More recently a couple of vacationing zombies have been trying to apply the sunscreen a little too late. These two zombies are Sharkbait and Sandy Corpse.

This is all rumours at the time being, however LEGO City Police department did release a statement saying “everyone should take care if they spot these zombies. And report the sighting to the FireStarToys or MinifigureHQ Instagram accounts”.

Recently another one of these monstrous minifigures seems to have appeared in and around Hawkings. USA. This monster is highly dangerous and can only be destroyed with the powers of telekinesis.

The history of the Demogorgon goes very far back in time to possibly the Ancient Greek times. Also known as the Prince of Demons, the Demogorgon was a primordial being whose very name was taboo to the ancient pagans much like he-who-should-not-be-named from the Wizarding World.

This monster featured in the classic game of Dungeons and Dragons and brought to life by the strange goings on in Hawkings USA by a group of children in the 1980s themed television show Stranger Things. The characteristics between the D&D Demogorgon and the Stranger Things creature are very different. But equally as terrifying!
When LEGO released images of the Demogorgon from the Stranger Things set the internet went in to a flurry of excitement. LEGO has never released such a scary minifigure or a set for a more grown up audience.

The set is absolutely brilliantly designed by Justin Ramsden (designer of Apocalypseburg, Microscale Hogwarts). But the Demogorgon minifig is outstanding. He has the legs from the series 15 faun, a regular torso but with claws added to the minifigure hands. Then his head features a closed mouth print and a hat piece to show when this scary creatures mouth is open to devour its prey! Beware if you spot this minifig in the wild as it can be very dangerous! 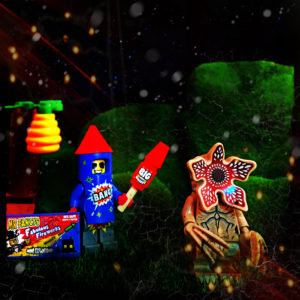 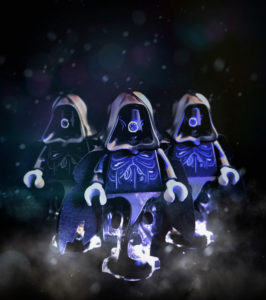 Another type of monster comes from the Wizarding World of Harry Potter as guardians of Azkaban. A Dementor feeds upon human happiness causing depression and despair to anyone near them. They are black ghost like creatures that grow in the darkest, unhappiest places. This is why we should be weary of these creatures, if a Dementor manages to make all people in a city suffer from despair and depression, the Dementors will grow and feed off more happy people, leaving the world and the people in it like an empty shell.

You can not destroy Dementors. You can only keep them at bay by making sure the world is not full of despair and darkness. If you are a very strong wizard and work hard you can master a spell called “Expecto Patronum” this spell will ward off the Dementors by creating a white vapour, or in more advanced casters, as a silvery-white animal shape. Like Harry’s Patronus deer. 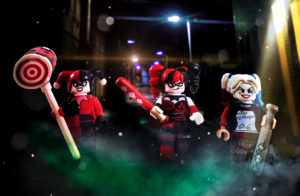 A monster in human form or “Daddy’s lil’ monster” as she likes to be known as, Harley Quinn. Harley is a highly intricate character and extremely intelligent. She was once a psychiatrist tasked with evaluating the psyche of the Joker. After developing an obsession for him she lost her former self to love of the Joker.

In reality her relationship with the Joker is that of an abusive toxic one that she craves and relishes, although she desires a normal and happy life. This has pushed her to the point where the pull towards insanity is too strong and her sociopathic persona overpower her desire to be normal.

This led her to do some pretty horrific things from kidnapping to trying to build her own family using body parts of people! In the world of LEGO, Harley has had various forms and each one is very unique. We have Harley classic Harlequin, TLBM Harley, DC Super Hero Girls Harley to Suicide Squad Harley from the LEGO Movie 2. This lil’ monstrous minifigure is definitely one to beware of in a dark LEGO Gotham alleyway. 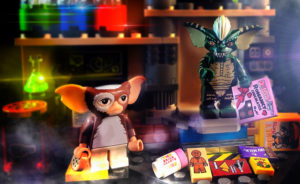 Back in 1984, we were told a list of things we shouldn’t do with a fluffy little Mogwai, but did we listen to the three rules:

1. Keep them out of bright light.
2. Do NOT get them wet.
3. Never ever feed them after midnight, no matter how much they beg!

For those who don’t know. Bright light would hurt them and sunlight would kill them, water would make them multiply and food after midnight would make a Mogwai transform in to an evil Gremlin!

Well we made these monsters, these Snow White and the seven dwarves loving Gremlins. These little green beasts caused havoc throughout the town ruining Christmas time. They tortured people, broke traffic lights, messed with stair lifts, the list goes on. And it was all for their own amusement and the need to create more of themselves.

If you come across a Mogwai in your LEGO City, make sure you follow the rules so it doesn’t turn into a monstrous minifigure!

Never judge a monster by the way they look. 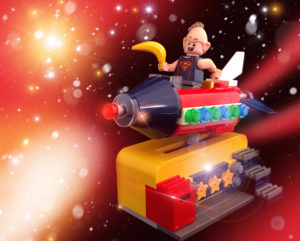 Many people including his own family see Sloth as a monster. When Sloth was an infant he was involved in an accident that left him disfigured. With a misshapen skull, one eye lower than the other and numerous missing teeth.

He is a member of the Fratelli family in the 1985 Movie The Goonies. Sloth was chained up to a chair and treated horribly by his evil mother and brothers due to his disfigurement. In this film Sloth is the true hero and his family are the actual monsters due to their cruelty towards him and their criminal ways.

LEGO created the Sloth minifigure for the TTGames LEGO Dimensions pack. Sadly the dimension portal closed sometime ago, but it left a few of the characters behind. If you spot Sloth wandering around the world of LEGO go say hi… he’s not a monster.

Poltergeists can be troublesome ghosts. They can cause all sorts of problems especially when you are just spending your vacation time decorating your country home. 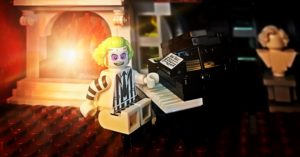 mischievous, trickster of a ghost. When the LEGO Dimensions portal closed he became trapped in the world of bricks and pieces.

Beetlejuice is quite the anti-hero. Where he may make disgusting gestures and comments he is actually useful to have around if you need a ghost to scare away unwanted visitors. For me personally, if I see Beetlejuice in the street I would probably avoid him, he smells really bad. After all, he was buried in the ground for a while.

Running away from the monsters

Other notable monstrous minifigures to mention are the Classic Ghost, Swamp Creature and Werewolf. We have also had some brilliant themes over the years. From Monster Fighters, Ghostbusters, Scooby-Doo and now the brand new Hidden Side.

I’m sure we are about to encounter so many more monsters and creatures to keep us awake at night!
So after all that talk about monsters I’m a little scared and I need to get to sleep without having nightmares. So off I go to explore another less creepy theme!

Have a great Halloween!

All images are my own unless stated.