While the King and his family do what royalty does, let us take a look at some of the less popular members of the kingdom. Don’t get me wrong, these guys are pretty popular in their circles, but those circles are a bit… far from the King’s circles, and more within the boundaries of the forest. 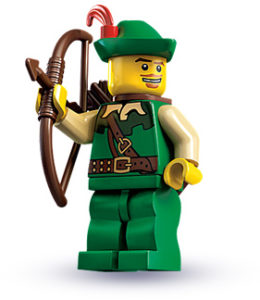 First we have the Forestman (CMF 1), the Forest Maiden (CMF 9) and the Rogue (CMF 16). These guys are not bad, in fact the forestman’s father helped the king when he was a child, found him and his knights a hiding place. However, as soon as the king became a king, their relationship changed. You see, the forest folk are rebels at heart, and no matter who the ruler is, no matter whether he is good or evil, they work against him. Steal from the rich and give to the poor and all that.

There is no easy way to say it – the Forestman is a show-off. True, he is always on the side of justice, but he loves his dramatic entrances just as much. He is also a sucker for tradition. The first forestmen appeared almost 30 years before him, and they were dressed in a very similar outfit – mostly green with bows and quivers and a fancy hat with a fancy plume. He continues the tradition with a few adjustments, like his improved belt and his shoulder strap.

The Forest Maiden, on the other hand, is among the first women who became a warrior of the forest. She joined the merry band of the Forestman after meeting him in an awkward situation. You see, the Forestman thought she was just another damsel in distress and tried to rescue her from the bandits surrounding her. Imagine his surprise when she was the one who rescued him (in  his defense, he never thought the bandits were clever enough to lay a trap)! After it was all over, they started talking and the Forestman learned that she grew up in the forest, just like him. They were meant to be together!

Luckily for him, she felt the same way. She’s been on her own for so long that she welcomed a team, especially one that fights for the innocent. However, she made it very clear that there was no way she was going to sit back while he did all the fighting, so they became partners as well.

Unlike the Forestman’s short bow, the Forest Maiden carries a long bow and a shield with a tree engraved on it. There are stories saying that particular long bow is very similar to the ones used by the legendary creatures called ‘elves’, but everyone knows they’re just stories and not real (!). She wears a dark green dress, to blend in better, and surprisingly, the dress never limits her movements. She’s that good! She takes great pride in having a hair piece similar to another strong rebel – the Wizard once told her there’s a princess in a galaxy far, far away who has the same hair. 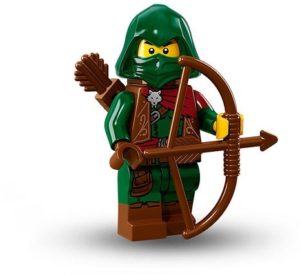 The last one of the forest folk is the Rogue. Now he is very different than the previously mentioned characters. He comes from an old line of Wolfpack Gangs who just rob and pillage for the fun of it. While he mostly behaves the same way, there are rumors that he’s not exactly like his ancestors, that there’s good in him, too. He, of course, denies these rumors and continue his thieving without answering to anyone.

The Rogue carries a short bow and a quiver like the Forestman. He is also dressed mostly in dark green, and covers his head and face with a cowl. His enemies can’t know who he is now, can they? He wears a brown leather vest and a dark red sash with a wolf-head pin on it, showing his ancestry. He’s a handsome fella, this one, some even say he used to have a crush on the Forest Maiden – and some say he still does – but gave up on her when he realized she would never become a thief like him.

The Witch and the Wizard

Ages ago, there was a very famous school for witches and wizards alike. There were three students, two boys and a girl, and they were very close friends. What? No, no, I’m not talking about the famous boy who lived and his gang, I’m talking about the Wizard (CMF 12), the Evil Wizard (CMF 13) and the Witch (CMF 2).

As time passed, the three grew apart so much that they became enemies. The Wizard chose to use his power for good, while the other two decided to wreak havoc. It was no wonder they ended up on opposite sides. Well, at least two of them. The Witch still hasn’t decided whether  she should be good or bad. 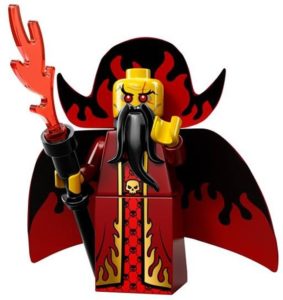 I told you fashion was important in the wizard community, didn’t I? Well, here’s another proof of that. The Evil Wizard’s outfit is, while evil, really eye-catching. His skull-patterned red dress, his golden skull Robe with belt-buckle, his flaming robes and cloak… and of course his fiery staff! If that doesn’t scream “dangerous”, I don’t know what does! Along with his red eyes and the scar he got while fighting his old friend, he creates a pretty scary picture.

Everyone should have hobbies and the Evil Wizard is no different. He spends his days planning evil schemes, how to destroy this hero, how to incinerate that town… But no matter how hard he tries, no matter how many weird and unusual creatures he sends, someone always beats him. He keeps trying, for he believes one day he will be victorious!

The Witch… yeah, like I said, she hasn’t chosen a side yet. She likes the feeling she has when doing something good, but being bad is so much more fun! Besides, what good is having so much power if you can’t have a little mischief in your life?

Her skin turned green as a result of one of her experiments. She was only trying to find a better fertilizer for her neighbor, but not only the potion turned his crops into candy, inhaling a certain ingredient made her skin change as well. She doesn’t mind it, since she always liked green, but people started calling her “wicked” for no reason, and that does bother her.

The Witch wears a black dress, torn due to some of her more dangerous experiments, and she always carries her spell book and an anti-curse potion chained around her waist. She has many different colored belts, but she prefers to wear the green one most of the time, since it goes so well with her skin. Of course, she has a pointy hat since it’s a must for witches, and a broom, good for cleaning her hut after spell-casting and the occasional flight.

The Bear and the Boar

The poem goes “Once upon a barren moor; There dwelt a bear, also a boar.” I can assure you, while they can be hard to bear, neither of the following characters is a bore. Yes, I’m talking about the Frightening Knight (CMF 15) and the Evil Knight (CMF 7), or as they are more widely known, the Bear and the Boar.

It’s really not that hard to see the origin of their nicknames, just take a look at them and and you’ll understand. The common folk don’t spend much time on giving nicknames, and if there is something right in front of them, they just use it. 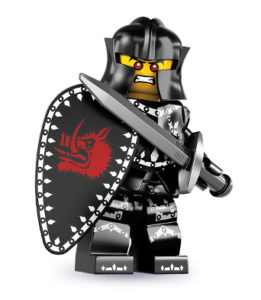 Right, back to the subject. The Evil Knight, as his name suggests, is pure evil. While most bad guys do bad things for fame and fortune, this one does it just for the sake of being bad. Think about the childhood trauma of the guy… Anyway, as can be seen in the picture, there’s a boar engraving on his shield, hence the nickname. Destroying everything in his path helps enforce that name, too. He is very well prepared for any and every battle, with his helmet, armor and sword, all in black, of course (except the sword, which is very very dark gray).

Those who survived his sword tell stories of his origins, which go way back to Basil the Bat Lord, the same baddie who was the predecessor of the mysterious Dragon Queen we talked about last week. Nobody knows whether he was related to Basil or just trained by him, but hearing the name is enough to strike fear nonetheless.

Over the years, the Boar has served so many evil masters, the most memorable one being Lord Vladek. After his initiation, he realized his eyes turned red, and stayed that way even after he left Vladek’s service. This, of course, made him look even more evil, and for a fraction of a second, made him smile. 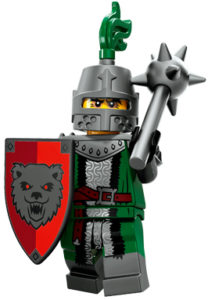 The Frightening Knight, more commonly known as the Bear, isn’t evil. He does, however, have a strange passion: He loves scaring people. He doesn’t need to destroy towns or beat knights to do it, just one look at him and everyone scatters around. To emphasize his scariness, he made the blacksmith paint a red-eyed bear on his shield, and chose a morning star as his weapon, but he’s rarely seen using that weapon. Like I said, he doesn’t need to.

Apart from his scary shield and weapon, the Bear wears the best chain mail in the realm, and on top of it, a dark green coat to always keep him warm. His helmet covers all his face except his eyes, and there’s a dark green plume on top of it. He also has spiked shoulder pads to complement his overall scariness.

But he has a secret…

There are only a few who know it, and they are too scared to tell it to anyone.

Once, only once in his life, the Frightening Knight took off his helmet.

And someone saw his face.

The Bear heard a voice that said “Aaaw..!” and he immediately put the helmet on, but it was too late.

The rumor is, it was that exact moment he knew he had to be the scariest knight ever if he wanted to keep his secret from ever getting out.

So, that concludes our Medieval journey. See you next week with a whole new set of historical figures! 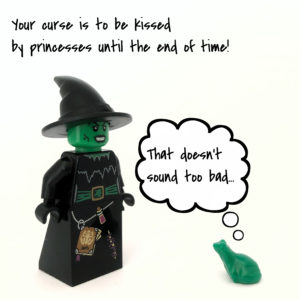 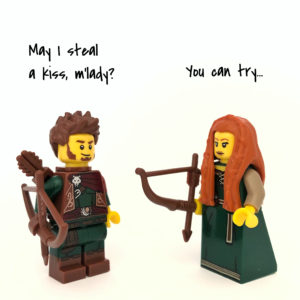