In the course of a month we’ve looked at several different cultures included in the Collectible Minifigure Series. Some were around Europe, some were more to the Far East. Today, we’re going to a whole other continent, nowadays more widely known for its stars and stripes. We will look at the minifigures from the U.S. of A, more specifically the Wild West!

Ever since the first CMF series, there have been cowboys and Indians – or rather, Tribal people. There are four from both groups in today’s story, and one who’s friends or enemies with all – depending on the day.

A Woman and her Child

The Tribal Woman is very special. Not only does she have a famous great grandmother who was part of an expedition, but she has the first (and so far, the only) papoose – a baby wrapped up in blankets. Like her great grandmother, she carries her baby wherever she goes, sometimes in her hands but mostly on her back.

The father of the baby is a mystery to everyone. Some say he was a warrior killed in battle, others think he was a cowboy, ran off adventuring. No matter who he was, it doesn’t change the way this lady feels towards her child.

The Tribal Woman is a peaceful lady. She’d rather sit in the camp and tell stories rather than go off to battle. She proudly shows her intentions on her face, with red and white face paint. Two feathers were given to her in the past, for her bravery and wisdom during hard times. She wears a hand-made tan colored dress with brown buckskin, and a necklace symbolizing the circle of life.

After participating in a few battles, the Tribal Hunter decided to change his profession and use his bow to hunt. He is an excellent tracker, and neither human nor animal can hide from him if he is on its track. He has earned the right to wear black & red face paint by showing great strength and bravery – both in battle and against animals. The two golden eagle feathers he wears further emphasizes his qualities.

The Tribal Hunter’s tracking and hunting skills are very well known within his tribe. However, there’s something else also well known, and not really appreciated: His foolishness. He tracks the animal, even the most difficult one, but then instead of hunting it, he silently sneaks up on it and gives it a poke! Of course a rabbit or a deer just runs away, but a bear doesn’t like being poked and starts chasing him. Being a fast runner comes in very handy in these situations, but hey, what’s the point of being the best hunter if you can’t have a little fun?

As a teenager, the Tribal Chief did many good deeds and he was allowed to wear a head-dress shortly after he earned his first feather. He is a great chief, yes, and his tribe loves him, but they would love him even more if he could just stay in one place for more than a few weeks. Wherever he goes, they follow, and while traveling the world sounds great, having elders and children walk around all the time isn’t very ideal. But he just can’t help it! The world is full of adventures and they’re all waiting for him! New places to see, secrets to  find out, people to meet…

The blue and white markings on his face shows his confidence and peacefulness. After all, you can’t go into other people’s territory if you’re not friends with them! Even so, he carries his spear with him just in case. He wears a beaded chest plate which has been repaired by almost every woman in his tribe.

He is always in a joyous mood, and why shouldn’t he be? There’s always the next adventure to look forward to!

A Warrior in the Making

The Tomahawk Warrior is a bit too eager to use his tomahawk – and he does, but not necessarily in battle. He is very new at this ‘warrioring’ anyway. However, he does use it to open his mail, slice his pizza, and even practice his juggling – which doesn’t always end well.

He wears his war paint with pride, on his face, his chest and his arms. True, he doesn’t know exactly what they mean, but they sure look fierce! He has a feather necklace, given by his father as a reminder of the great warriors among his ancestors. His leather leggings and breechcloth were made by his grandmother, who is sadly not with us anymore. Since he’s a warrior, his hair is also cut in a way that says “do not approach” – all spiky! Unfortunately this has no effect on the other members of his tribe because most of them have that same hairstyle!

The next four on our list is very closely connected, with the Bandit being at the very center.

You see, the Bandit stole the Cowboy’s horse a while ago. Since then, the poor horse had many different owners, but interestingly, the Bandit knows who has it at the moment. He has been keeping tabs just to make the Cowboy crazy. It is one of the few good things he may have done in his life, because this one is all about cheating.

That’s why it has been very easy for the Cowgirl to catch him. The Bandit always looks for a shortcut to success, and he ends up getting stuck among the cacti. However, no matter how many times he gets caught, he always finds a way to escape and continue his wicked ways.

The Sheriff has some difficulty keeping up with the Cowgirl and Bandit’s chase-and-escape routine. He has already captured all the other outlaws, but when it comes to the Bandit he’s always too late. It’s either the Cowgirl, with her capturing skills, or the Bandit, with his escape skills who leave him one step behind.

Meanwhile, the Cowboy gets more and more frustrated each day for not being able to find his horse. The Cowgirl agreed to help him, and even managed to get a few words out of the Bandit as to the horse’s whereabouts, but it turned out to be a young man playing dress up and pretending to ride a horse. It was a very disappointing day for both. 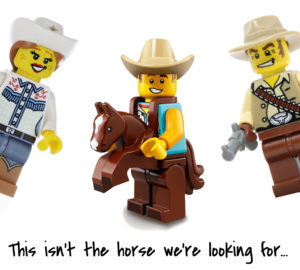 Riding into the Sunset… In Style!

Let’s take a look at the outfits and the accessories of our cow… people? That really wasn’t the word I was looking for. Anyway…

The Bandit and the Cowboy share the same hat, but the Bandit prefers his in black while the Cowboy’s is dark tan. The Sheriff’s hat is similar, but has a wider brim and a reddish brown color, along with a sheriff’s star on it. The Cowgirl wears a white hat, also with a star attached to it, and her long orangish hair is braided on the back.

All three men prefer pistols, but they differ in terms of color. The Bandit is the only character (ever!) to have black ones, and the Sheriff’s silver pistol is unique to him. The Cowboy prefers using standard dark bluish gray pistols – easier to replace if lost. The Cowgirl doesn’t like guns, so she uses a lasso instead. She uses is with such skill that no one has ever seen her miss her target!

Since the Bandit and the Cowboy use their guns more frequently, they both wear an ammo belt. The Sheriff prefers to have a pocket watch instead of an ammo belt. He would very much like to know the exact time when he finally catches the Bandit! The Cowgirl wears a white plaid shirt with rose patterns on it, and becomes the most stylish of the four. I mean, we all know women dress better than men, right? 🙂

For Glory, God and Gold

Now, before we finish our adventure in the Wild West, there’s one more person I’d like to mention: The Prospector.

This one is very different than the rest, and yet his adventures have made him come in close contact with almost all of them. He is always searching for treasure, be it gold or oil, and during this time he managed to ruin the Bandit’s plan of a mine heist, come across the bear that was chasing the Tribal Hunter, and have boiled beans with the Tribal Woman. Not all the interactions are pleasant, of course. Who would want to be chased by a bear, or even worse, armed bandits? But no matter what happens, everyone usually welcomes him since he always has interesting stories of his adventures.

His clothes are ragged and tattered. A patch here, another there, even his suspenders have been torn apart. Did you know his pickaxe used to be black? It’s true. He has been searching for treasure that long, and unfortunately, without success. He doesn’t mind, though, for he knows one day he will find what he’s looking for. Until then, he is very happy sleeping underneath the stars.

Once again we’re at the end of our journey. I hope you enjoyed getting to know the people from the Wild Wild West. Next week we’ll have the last characters of Minifigures Through Time, so make sure you set the date on your calendar. And after that… who knows? 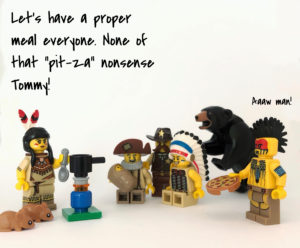 Images showing single figures are taken from www.brickset.com . Group pictures belong to the author, except the one with the cowboys which is a collage of images taken from Minifigs.blog, Jay’s Brick Blog and lego.com.