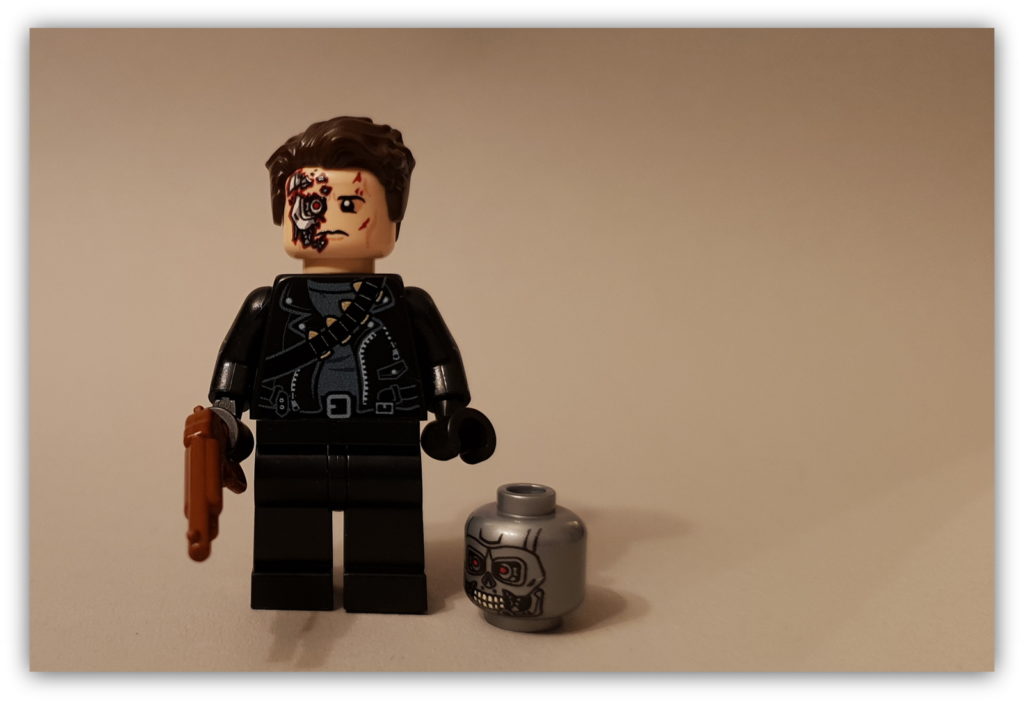 When Firestartoys released their “Uncle Bob” minifigure, I had to get my hands on one immediately. I’ve always been a huge Arnie fan; whilst I’ve not seen the all the 76 films, videos, voice overs and TV shows he’s been in, I certainly saw nearly all the films, including the Terminator franchise films. Then I started to think about how much LEGO has engaged with science fiction and this article looks at a few LEGO sci-fi minifigures that fall under that banner. I should point out that some, like Uncle Bob, are custom prints and in a couple of cases would fall outside of LEGO and into the brick-built construction compatibility arena. 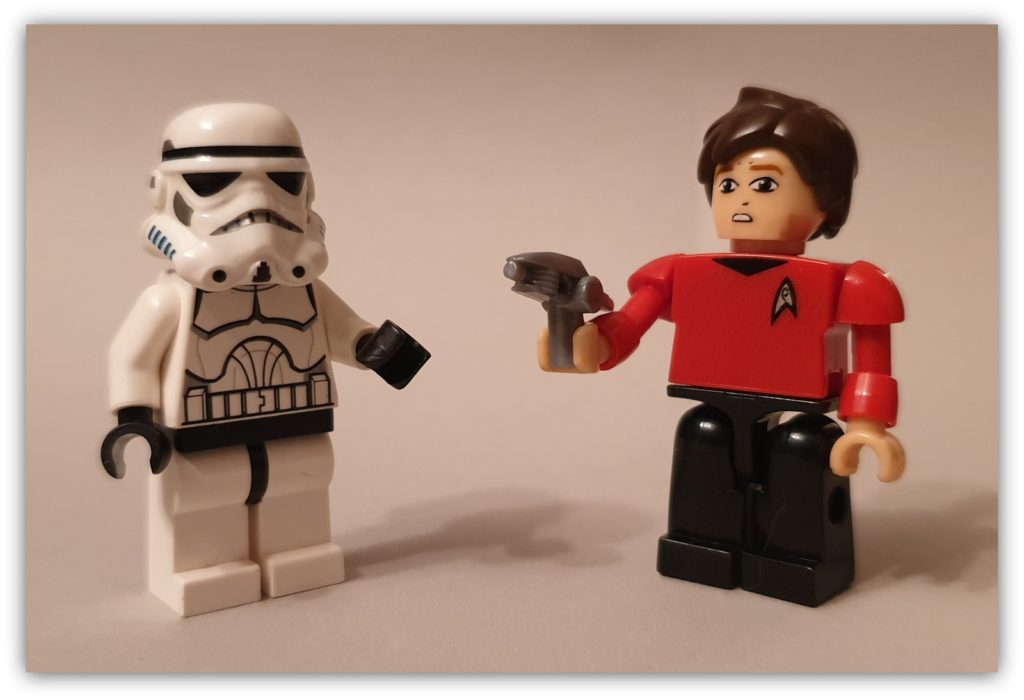 You’d have thought that would be an easy question to answer – it’s robots, right? Not totally! Science fiction dates back a lot further back than you may have thought; with examples being written and published in the 1600s and much, much earlier! Generally, science fiction considers alternate worlds and timelines based upon advanced science and technological improvements; so that will (and does) include aliens and spaceships!

Film and television has played a great part in the development of the genre. This is showcased with what may be the two biggest sci-fi space fantasies ever; Galaxy Quest and Firefly… sorry, Star Wars and Star Trek! Both feature aliens, spaceships, advanced technologies and future worlds; even when they went back to 1986 for Star Trek IV! 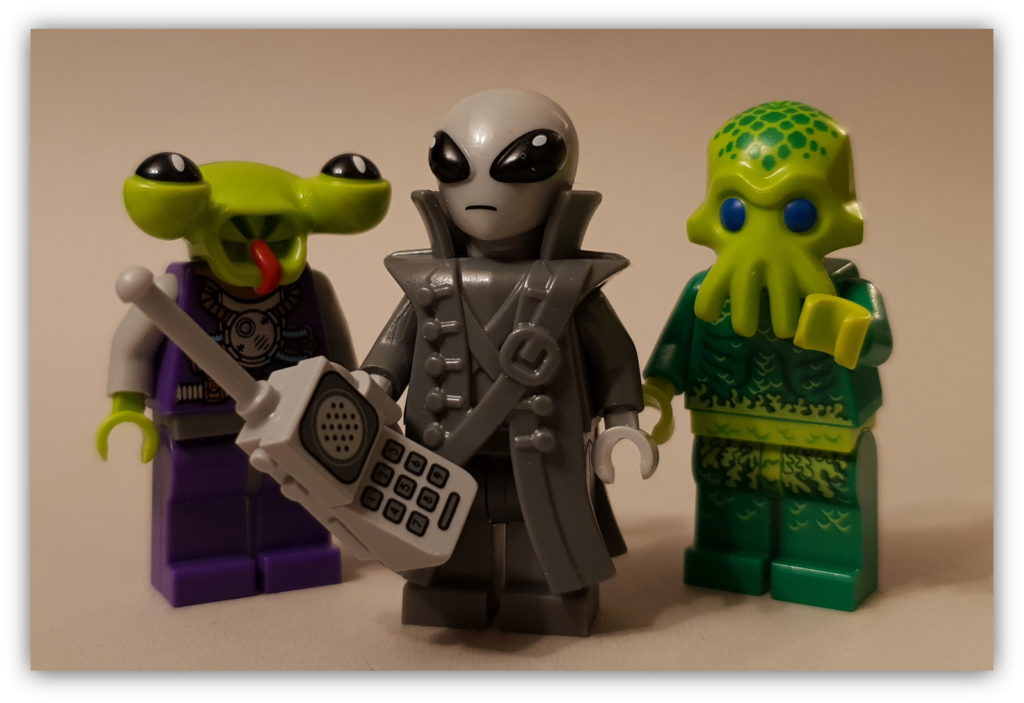 Aliens feature heavily in science fiction – the idea of evolved beings from far distance planets. Typically, they are used as the “bad guy” in the film, intent on assimilation or planet destruction. Fortunately, that isn’t always the case, such as in the film “Paul”.  But sometimes, of course, the aliens may appear cute and cuddly, like Mogwai (which, trivia fans, means Devil, demon or gremlin in Cantonese) until of course, you forget to follow the rules! In this image, “Paul” is from the Collectible Series 6 and I added the phone and Brickwarriors pirate coat from Firestartoys.com. 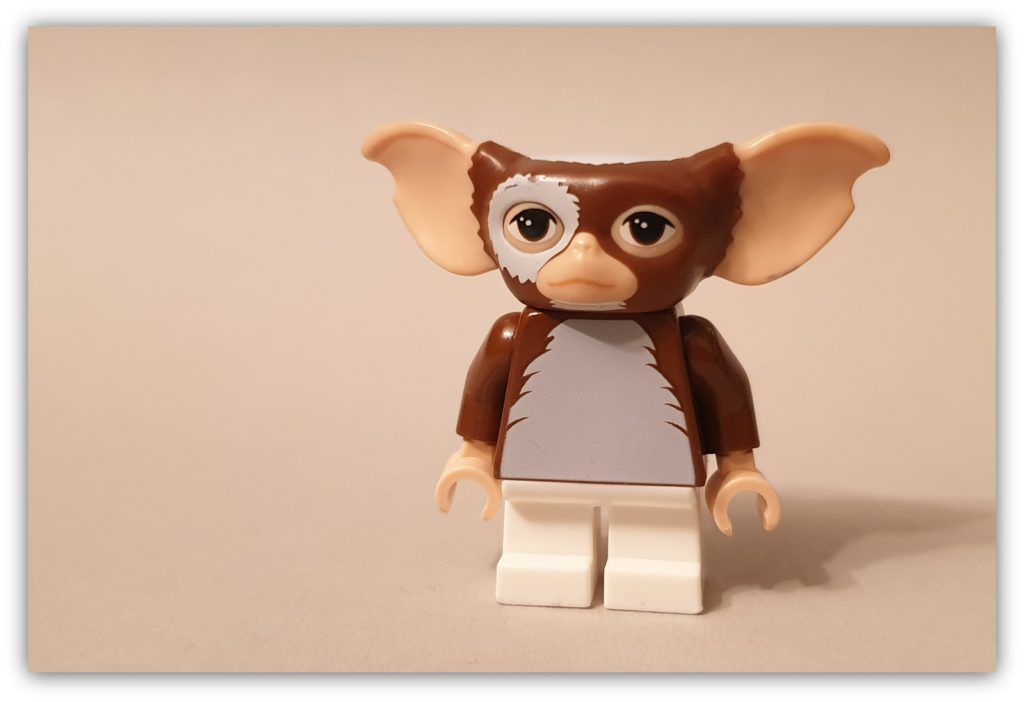 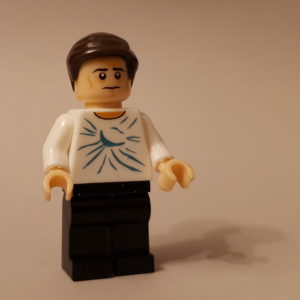 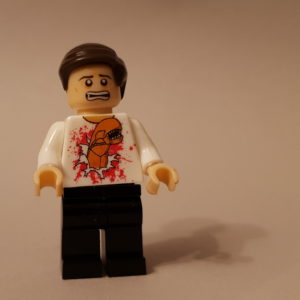 Of course, the science fiction film world goes almost hand-in-hand with suspense and horror. This double-sided custom print of the Alien bursting from Kane’s chest captures that scene so perfectly . I feel fortunate that I was able to follow this character up with a custom alien Xenomorph that I found on eBay. 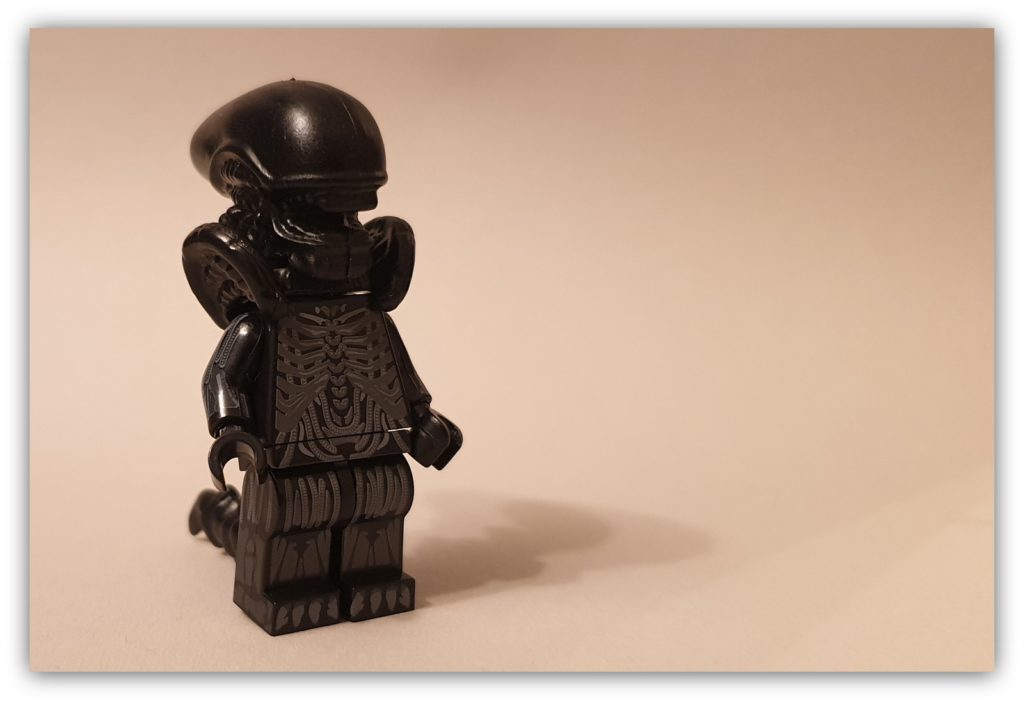 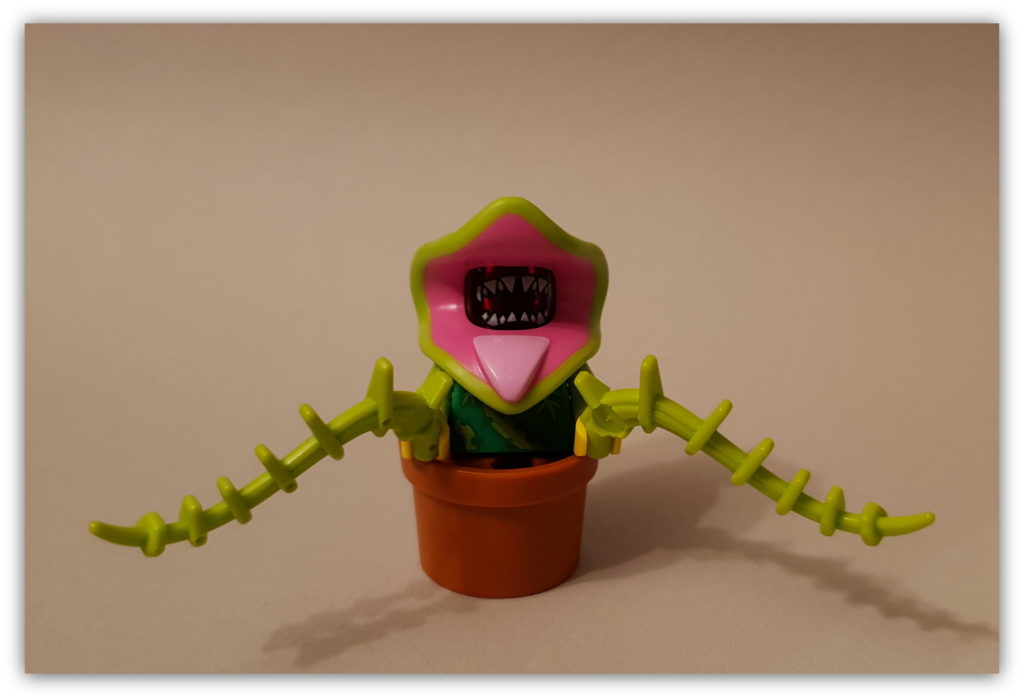 I don’t usually like musicals; the idea of people walking down the street then bursting into a song and dance is frustrating; especially if the song includes an important plot point that you’ll only know if you actually learn the lines yourself. That said, there are a couple that I love; one of which is the Little Shop of Horrors, starring Rick Moranis, Ellen Greene and Steve Martin (and others!). The story basically centers around a strange plant that appears in Mushnik’s Flower Shop. It demands a particular food source and … well, if you’ve not seen the film, I think you’ll enjoy it!

My other musical favourite is the Rocky Horror Picture Show; it too features aliens and space travel, so is science-fiction! And it’s also one of the few instances when seeing it live is as big a production as the film, especially if you enjoy a bit of audience participation!

I made Audrey Rose II from parts sourced from Firestartoys. So, the pot can stand on the ground, I’ve just rested the torso on top. 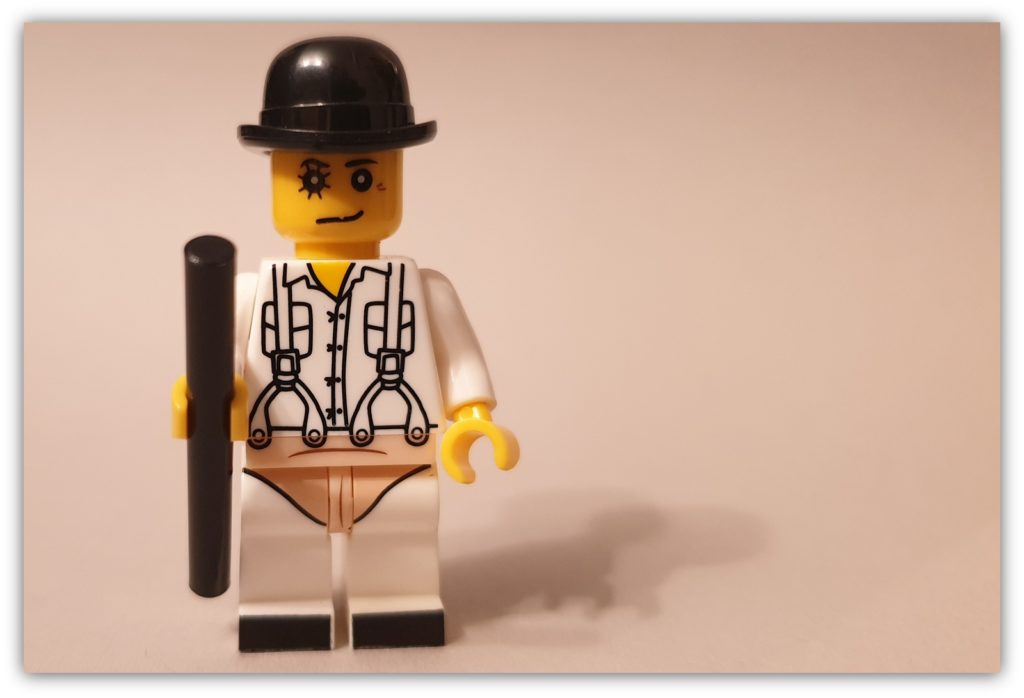 But science fiction isn’t always about aliens. Sometimes it can be an alternate reality, where culture and lifestyle can be placed under the microscope. Possibly one of the most controversial films in this genre is Kubrick’s film adaption of the Anthony Burgess novel “A Clockwork Orange”; a fascinating study into the impact that violent films may have on society and its treatment. I noted that it was controversial as Kubrick banned the film from 1973 following two copycat crimes in the UK. This figure was a custom print by minifigs.me.

We are the Robots! 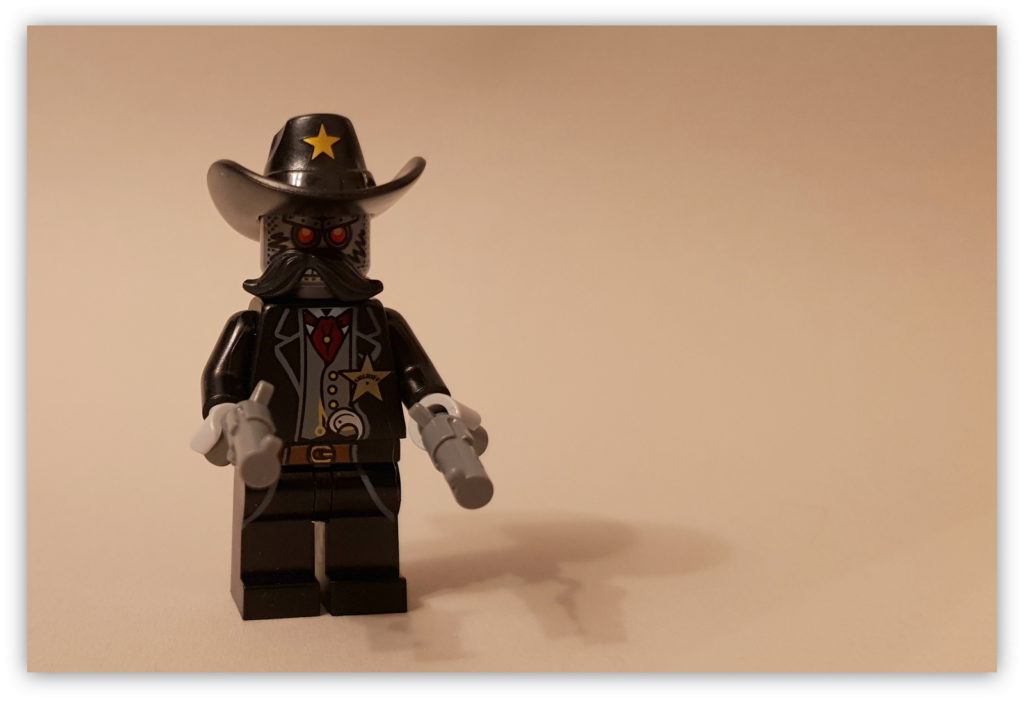 Following on from the previous section, one alternate reality is to consider how we can make environments to satisfy our baser needs. A classic film example (which has been adapted into a brilliant TV show) is Westworld. Of course, this all works if the robots behave… and in Westworld (the film) the robot, played by Yul Brynner, is a cowboy (using the same costume he used when he played Chris in the 1960 film The Magnificent Seven).

Whilst I have used the sheriff from the LEGO movie, what I hadn’t appreciated was that Arnold Schwarzenegger had based his performance in the Terminator on Brynner’s portrayal of the indestructible robot!

As an aside, much as I do really love the Uncle Bob minifigure, I do think of this figure as the T2/Dark fate reboot figure in my collection, as several years back I created my own Arnie… 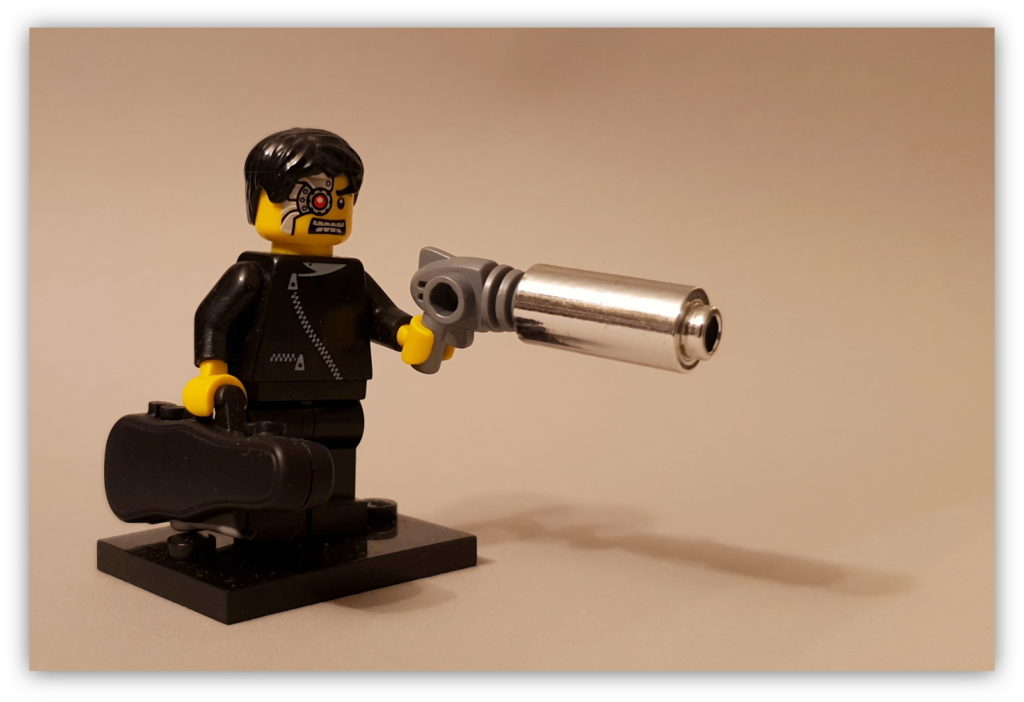 Of course, robots and LEGO have gone together for quite a while. There are several robots that have appeared in Collectible Minifigures (there’s a fun article here on this very subject). 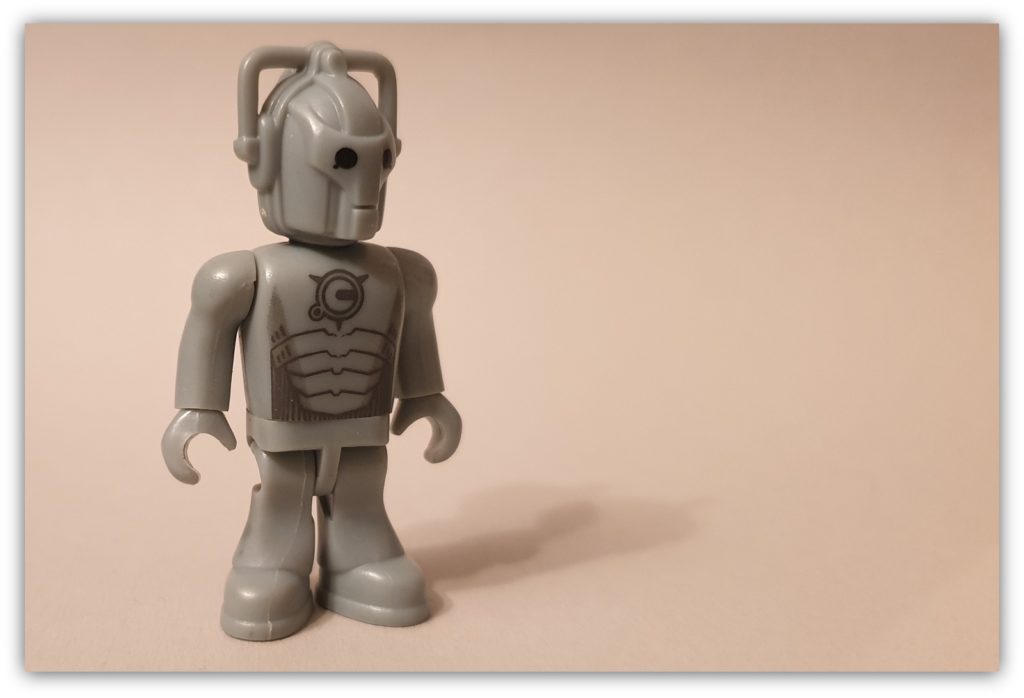 I think it would be unfair to suggest that LEGO had cornered the market on science fiction minifigures. Before LEGO had secured the license for the TARDIS, Character Building Toys had already released Cybermen and some incarnations of the Doctor. Personally, I’m not a fan of the figure design of the CBT figures; I think it may be the shape of the legs, but the heads are of the right size to be used on LEGO minifigures; perfect for that hybrid look!

Whilst I have managed to find a custom print version of Mr Spock (science fiction space alien race!) I still occasionally make use of the red shirt Star Trek character that we saw earlier. Sometimes, sacrifices have to be made; and it’s supposed to be the guy in the red shirt. 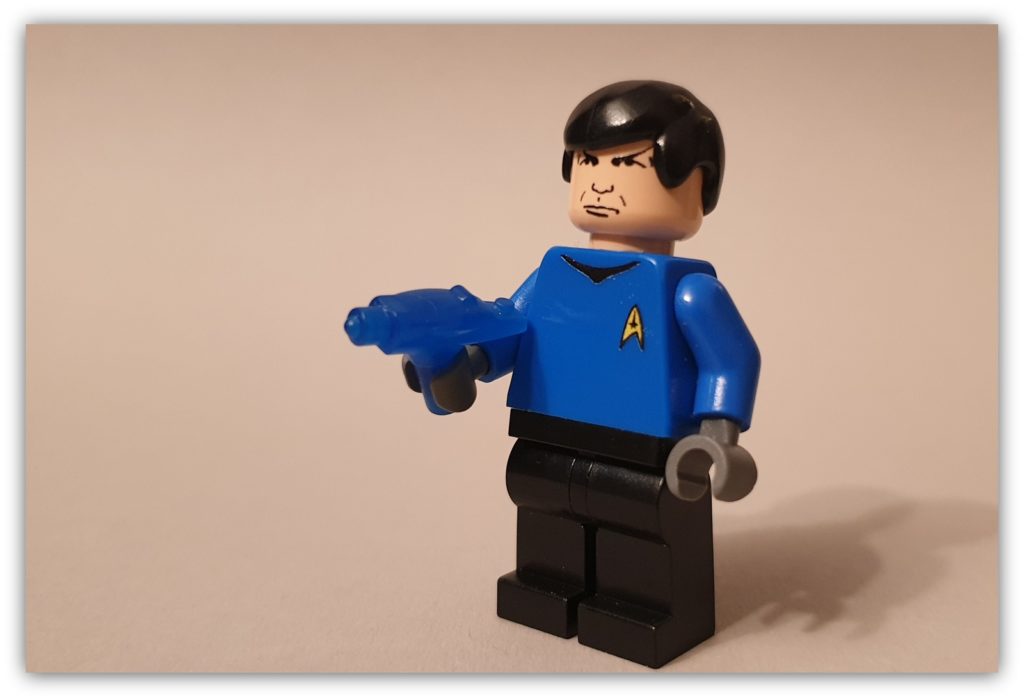 I decided that I would avoid the “standard” LEGO science fiction world; I felt that it would be too easy to just write an article on the Space theme and avoid some of the more unusual elements. But of course, with characters such as Benny in the LEGO Movie, LEGO has always embraced science fiction in one form or another.

I never really enjoyed playing with the Space theme; the sets were OK, but in my mind, they always seemed as if the designers had just thrown some parts together to see what might be swooshable in a spaceship kind of way. Having grown up with Space 1999 on the TV, it seemed that LEGO was (back in the 1980s-ish!) trying not to embrace the licensed model market. But we did have the M-Tron figures and the Blacktron figures so there was always the opportunity for space forts and space battles!

So, what space-related LEGO sets got your interest? Was it the Space theme, or has it been Star Wars all the way? Let me know in the comments! As Mr Spock might say, that is the logical thing to do!