Hi everyone – Tom back here today with another super-powered article for you to sink your teeth into. Across my past three Marvel articles, we have talked a lot about the characters in the sets – with Minifigures clearly being a big selling point for many LEGO sets. So, I thought I would go through and look at my favourite Minifigures individually.

Now, it is important to note that I do not own these – but these are characters which I would love to own one day and absolutely feel as though they showcase some of LEGO’s best Minifigure work with the line. Without any further ado – let’s jump in. 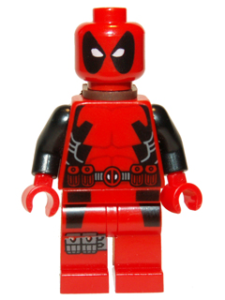 It’s no secret that the Mouthy Merc is a fan favourite character for any Marvel fan. Not only are his fourth-wall breaking, witty appearances in the comics a massive hit, but the more recent films starring Ryan Reynolds have proven beyond all belief that R-Rated superhero movies can be massive financial successes. Four years before the Deadpool movie had even debuted, there was already a massive hunger for his character – so of course the Minifigure from Wolverine’s Chopper Showdown went down an absolute storm. I feel as though this figure is an example of how sometimes simple figures can still capture a fitting aesthetic. Everything here from the utility belt (complete with Deadpool buckle) to the muscular body showing through his super suit feels authentic to the character. The black suit patterns continuing down the suit are also nice – and the leg holster on one side adds a little bit of extra detail on one side which I feel wasn’t essential. The colour scheme here is spot-on, and this combined with a simple yet effective head print makes for a wonderful Minifigure which really encapsulated this iconic character nicely.

And, of course – you can always buy this figure and then spice it up even further with the fantastic set of additional heads the team at Firestar Toys have crafted. 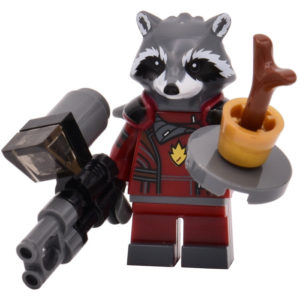 Originally, I had planned to just write about the normal version of Rocket here – because, to be honest with you, I forgot that the Ravager uniform variant of Rocket existed as he is buried in my Milano high up on a shelf. However, when researching the characters I wanted to include in this piece, he popped back up – and I, of course, must include this variant in the listing. Rocket himself is a fantastic figure – and I really appreciate the Molded head and tail pieces which LEGO created to convey his character. Sometimes, LEGO struggles to create characters with exaggerated proportions – but Rocket is an example of a character which I feel turned out great. He looks fantastic – and scales incredibly well when displayed with the other members of the GOTG. I also really appreciate the attention to detail on this version with both arm printing and dual-moulded legs complete with boot printing AND side leg printing. This truly shows what a LEGO Minifigure should aspire to be – and it is a shame that budgets prevent us from getting this level of detail more often. This version of Rocket is iconic – and is most the variant that you should track down if you don’t own one already.

Next up on my list is probably an unexpected addition – but we have the original version of Drax from GOTG. Like Rocket – Drax stands out to me for the level of detail included on this figure. Not only does he include Printed Arms – something which are, as already discussed, incredibly uncommon; he includes an incredibly intricate torso print too, which I have a lot of appreciation for. I really like how the light red print of Drax’s tattoos contrast with the light grey colour – creating a visually appealing deco. I also appreciate how the designer here chose darker grey for Drax’s abs – meaning they are easily defined against the rest of the torso print, adding an extra dimension of detail to the character. I also really appreciate how the character’s tattoos are LEGO-fied – adding a unique value to them which I love. 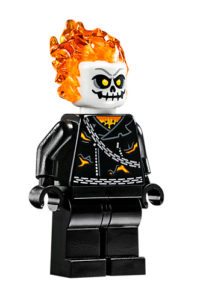 Now, I’ve spoken a lot about how a lot of the figures I am passionate about have a lot of good details on them – but sometimes you don’t need a ton of detail to make a good figure. Take, Ghost Rider. Ghost Rider only has a torso and back print – but his print looks fantastic thanks in part to the clever, tattered design of his leather jacket. The orange colours underneath look fantastic – and help to make the character feel almost illuminated in its nature. I also really like the chain which adorns his torso – calling back to the iconic weapon which Ghost Rider uses in nearly all his depictions. These subtle callouts are complimented nicely by a specialised flaming skull headpiece – which uses sculpted flame as opposed to removable flame to capture a unique and vibrant looking fiery effect. I really appreciate this commitment to giving the character his own identity with a unique piece – and I think the payoff really shines through with this great depiction of a fan favourite character.

This is a figure you can pick up on the FST website right now – and I would DEFINITELY recommend it. 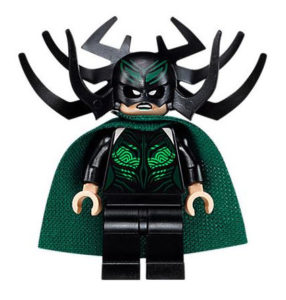 Earlier, when talking about some characters – we spoke about how giving a character a specific, sculpted piece can sometimes make that character. Well – Hela is an example of LEGO creating a specific mould which absolutely nailed her character. I am, of course, talking about Hela’s amazing headpiece – which includes several tendrils protruding from it at different angles. Here LEGO used a similar technique to their Batman figures – creating a print underneath which lined up with the helmet perfectly to complete this iconic look. Further to this is Hela’s alternate expression – providing one expression without the ‘mask’ so you can display her in her non-helmeted apparel. This choice in how you display the figure was fantastic – and solidifies here as one of my favourite Marvel antagonists to get a LEGO Minifigure to date. 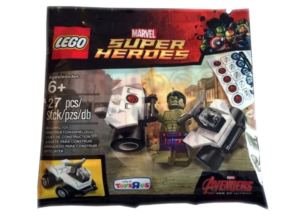 Next up, we have the Avengers: Age of Ultron Hulk Minifigure. I’ve chosen this one for two reasons. Firstly – because it is nice to have a Minifigure version of the Hulk. Whilst we all absolutely adore the big-figs which LEGO create, sometimes I think people prefer Minifigures anyway – so having the option to own both is never a bad thing! But in addition to this, I also really appreciate the 360-degree printing on Hulk’s shorts. Having these dual-moulded shorts makes this figure look a lot better than the original Hulk minifigure – which only had shorts printed on the front – and really highlights, I feel, how LEGO do iterate and improve upon their designs. This illusive character is certain to be popular with collectors and Marvel fans alike. 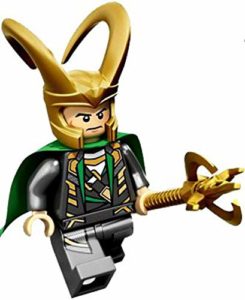 Following on, we ironically have the character dubbed as ‘Puny God’ by Hulk, Loki. I’ve chosen this  Minifigure for two reasons. Firstly – I appreciate how his print flows from his torso into his hips and his legs. This is something which recent characters (such as Wasp) would have benefited greatly from – but sadly LEGO’s efforts with Marvel figures have become more lackluster in recent memory. Here, however, it works well – adding a nice level of detail which compliments the Minifigure. I also have a lot of appreciation for Loki’s helmet piece – which, although not entirely accurate, does work well for the trickster – creating an instantly recognizable character who is iconic for being the first ‘major’ villain that our superheroes faced in the MCU.

Luckily, he, too, is a figure still available on the FST website. 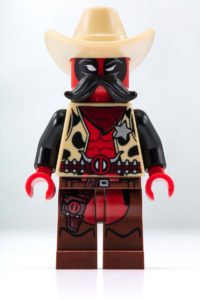 Now, as much as I would love to have a list without any of the San Diego Comic Con exclusives on here due to their lack of wider availability, it is undeniable that sadly these often end up being some of the best LEGO Minifigures to join the line-up. Take, for example, Sheriff Deadpool. This quirky and unique character PERFECTLY matches something that I feel we could see Deadpool do – as he is the kind of character to break the forth wall and dress up as other characters so this apparel makes perfect sense. I also LOVE the addition of the cow horns to the Deadpool belt-buckle, and love how we have a little red Deadpool sign on his gun holster. There are even nice additional details – like the black patterning of his under suit visible through the breeches on his right-hand leg and between the belt and his gun-belt on his hip. Subtle details like these go a long way with Minifigures – and they really make this unique, and frankly, fun, character shine in his own way. 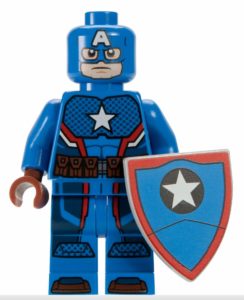 If you managed to make it through my three-part Marvel sets breakdown, then you will know how much I ADORE Captain America. He is, by far, my favourite Marvel character – so of course, the SDCC exclusive of him had to make this list to. This exclusive variant of Captain Rogers (Based on the story ark where is revealed to be part Hydra) stands out to me for three reasons. Firstly – the variety of colours used on the design. We get dark blues, light blues, blacks, whites, reds, browns and greys – creating a well-balanced and intricately detailed design. Secondly – I love the different design shield. Just like in the comics, this is a break from Cap’s more traditional rounded shield – doing more to diversify this as a distinct and specific version of the character. And lastly, and most importantly for me – PRINTED LEGS!!! One of my biggest gripes with LEGO’s Captain America figures must be their lack of printed legs. LEGO carried the same minifigure from Age of Ultron into the Civil War sets – without upgrading the character at all, when an addition of printed legs would have been absolutely welcomed. This arguably lazy attitude to the character is upsetting – and something we see across the board, so seeing printed legs on this variant was a nice change.

As a side note…if someone wants to donate one…. for…. you know…. research…. I am all ears. 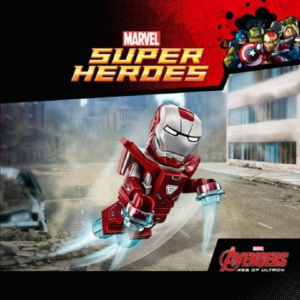 Number one, for me, is the Silver Centurion. This Avengers: Age of Ultron polybag set a new standard for Iron Man figures. Not only did it include intricately detailed dual-moulded AND printed arms, but it also included legs with side-printing too, great helmet prints, new printed pieces for the additional armour piece included AND to top it all off a brand new, bruised Tony-Stark face. Furthermore – it achieved all of this on a relatively available Minifigure, providing a high-quality figure which was more available than some of the SDCC figures previously mentioned. Availability is an important detail for me. I don’t care about an awesome figure if only a handful of people will own it. But if it is available more widely – then I am interested, and this figure absolutely hit that threshold. Great prints make this my favourite Iron Man to date – and quite possibly my favourite Marvel Minifigure in my collection.

What do you guys think? Do you have different favourites? Make sure to let me know!

And, if you’re still here – remember to check out my blog post on the Top 5 Marvel Custom Minifigures