There are some iconic movies and TV series that the kids from late 70s-early 80s remember pretty well. Beetlejuice, Gremlins, and E.T. are among some of these. Those kids are all grown up now, and if their interest in LEGO is still continued, seeing the characters from their childhood in LEGO form creates a different effect than seeing new ones. It takes us back to our childhood, brings back memories. We remember how we would pretend to be the people from the movies, how scared we would get, or how excited we would be. The LEGO Dimensions characters easily provide that for so many.

Even if you aren’t familiar with the films, the design of some of these characters are so good that they deserve appreciation. Special moulded heads, expressions, and overall printing of each and every one of them reflects the on-screen character really well. Add the mini-builds that come with the sets, and even if you have never owned or played LEGO Dimensions, getting them still sound appealing. 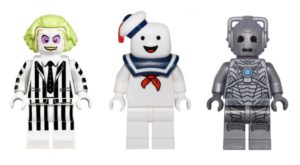 LEGO Dimensions sets were interesting. Not only because they provided new characters for the already existing sets, like Stay Puft from Ghostbusters and Cyberman from Doctor Who, but they opened a gate to minifigures which otherwise would not have been made, like Gremlins or Sonic the Hedgehog. Some minifigures may have even paved the way for future sets, like Newt Scamander or the Powerpuff Girls. Meanwhile, others simply provided an alternate look, such as Hermione Granger and Starfire.

As I browse through my favorite feeds on Instagram, they keep popping up from time to time. I learned their discontinuation pretty late, and I was really sad about it. If nothing else, they provided a nostalgia factor to the kids of the 70s and 80s. So I thought I’d take a closer look to all the minifigures released in this sub-theme and share what I think are among the best LEGO Dimensions characters with you. 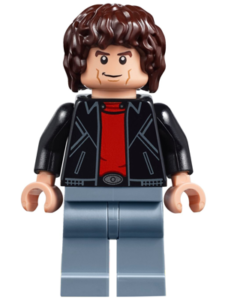 Michael Knight is truly a character from my childhood. I remember watching the series with my best friend. We just couldn’t wait for the week to pass, and when the episode was over, we nearly cried. While he adored Michael, I was in love with K.I.T.T. A cool looking car equipped with an artificial intelligence? You can’t get better than that.

Unfortunately, my interest lied more in the car than the car’s ‘driver’. That’s the reason why Michael is number 5 in this list. While K.I.T.T. is included in the mini set, he’s not a minifigure, and his representative is only here out of my love for the car.

Including E.T. in my top 5 is a little strange for me, because I may be one of the few who have never seen the film. Thankfully, it was such a hit, that its pictures appeared everywhere, including the humor magazines which I was very much into. So at least I knew what E.T. looked like, and LEGO’s interpretation of it seems really good. The head is a special mould, which seems fit for the special look of the character. The color and the torso print reflects the character very well, too. Furthermore, it creates an unusual possibility of mix-and-matching with characters of the same color released later on. I bet you never thought you’d see Maz Kanata naked, right? (Truthfully, I wish I could unsee it, but it doesn’t change the fact that it’s a brilliant idea!) 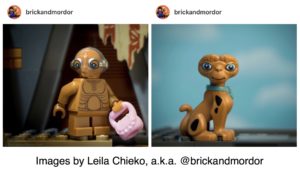 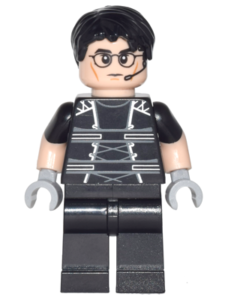 Mission Impossible films may not be as nostalgic as the others, but they still hold a special place in my heart. This version of Ethan Hunt, I believe, represents Ethan in the famous break-in-to-the-CIA scene from the first film.

I have to admit, Tom Cruise has never been in my top 5 of anything. However, I like this figure because it opens up possibilities to re-create Tom Cruise’s other films. The resemblance is pretty good, and with a little photo-manipulation, it can be used in scenes from Minority Report, Jack Reacher, or even the Last Samurai.

It’s not always the case, but sometimes official minifigures reflect the on-screen character so well, they can be used in custom minifigures, too. While not from the LEGO Dimensions series, some of my favorites in this category include Dastan (a.k.a. Jake Gyllenhaal), Qi’ra (a.k.a. Emilia Clarke) and Jack Sparrow (a.k.a. Johnny Depp). The face prints may not look very unique, but our minds have already connected these minifigures with their on-screen counterparts, giving us the chance to use them for the other characters they play.

And yet another strange choice. Usually, I’m not a big fan of big eyes on minifigures. They mess up my scale perception. Of course there are exceptions, but if the eyes are even a few milimeters larger than regular LEGO minifigure eyes, they seem… unnatural. And since there is a “normal” eyed version of Beast Boy, it sounds reasonable for my weird mind to choose that one over this (even though that one isn’t part of the LEGO Dimensions characters).

However, this Beast Boy interpretation fits perfectly with another minifigure series: The comical minifigures of Mighty Micros. Like all the other characters from the theme, he has short legs, big eyes, and a funny expression. Unfortunately, his teammates, Starfire and Raven, aren’t so lucky and remain in the “unnatural” section of my mind. 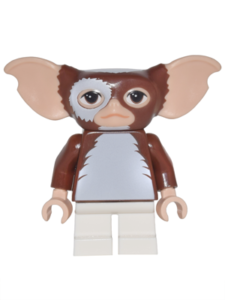 Computer generated imagery was not as common in the 80s as it is now, and neither was having so many toys around. When you saw a cute, fuzzy creature on the screen, you wanted one for yourself. Even today, we feel the same way, even though we know it’s not real, and even with all the diversity of toys. I mean, let’s be honest, if someone knocked on your door and said “I found this baby Niffler outside, would you like to take care of it?”, could you say no to them?

As a child, I adored Gizmo. Honestly, I don’t even remember the ‘turned’ Gremlins from the film. Whenever I heard the word “Gremlin”, I saw a puffy, big-eared, big-eyed creature with an adorable smile. And when I saw Gizmo as a minifigure a few years ago, all that love came rushing back.

Of course, having bigger-than-usual eyes were never a problem, because one, it was a special character from a certain film, and two, it was Gizmo! They could have made him pink and blue and I still would have loved him! (not that there’s anything wrong with pink and blue, just trying to make a point, that’s all)

Long story short, you know you’re getting old if you start saying things like “When I was a child” or “in my time”. So I’ll finish up before I give away my age even further.

I really like the LEGO Dimensions characters, both for bringing back memories and expanding the LEGO-verse into various areas. Who knows, maybe in the future there will be similar themes that have characters completely unrelated to one another, and yet all under the same common factor: LEGO.

If you enjoyed this post, go check out Tom’s article about minifigures of much more recent movies. After all, nobody likes being reminded of how old they have become 🙂

Oh, and don’t forget to hum the Knight Rider’s melody on your way out! 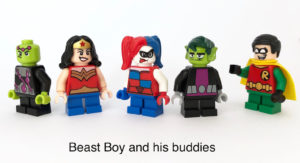 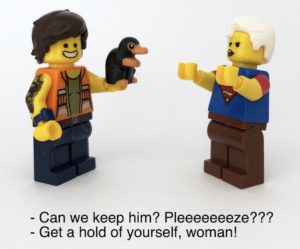 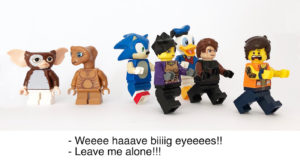 Unless credited, all images are from Bricklink. Except the last three.