Hello humans. We, the Robots, or the “mechanical minifigures” as your regular blogger called us last week, have confiscated her computer and incapacitated her. Don’t worry, she will still be able to write for you, though she may need some time to recover first.

As you well know, we are clearly the more evolved species here. We couldn’t let a mere human write about us, with all the prejudices already going on around the world. Therefore, we decided to act and tell you what you need to know, and only that.

Let me tell you about myself, first. I am L4D-7R0, but you humans have named me Lady Robot for some reason. I am a part of CMF Series 11, and the spokesbot for my people. Because of my bright colors, you have assumed that I am only good for partying. That is not true. Pink is a very rare color among robot kind, and only applied to the leaders of the community. We have more important things to do than just party.

While us robots are usually genderless, we like pretending to have a gender for kicks. It also makes talking easier. Can you imagine saying 2L0-CK3 every time I mention my partner in a conversation? No, I just say “he” and move on.

I imagine I look like a she-human to you, with my coloring, “lipstick” and certain equipment. I’ll have you know that what you call “lipstick” is a prototype for a very advanced equipment that lets robots taste things. Also, my eyes are up here, thank you very much. What you perceive as ‘breasts’ are in fact my danger-o-meter and life-o-meter. They are very useful while exploring new planets.

Of course you wouldn’t understand what they are really called, so I simplified the names for you.

Meet my partner, 2L0-CK3, or Clockwork Robot, as you know him. He was sent to your planet 5 botgigs before me, in the CMF Series 6. Because of his size, he was considered as a toy and given to children. This foolishness helped us gather information about your species as well as your planet. Thank you for that.

2L0-CK3 is an older model. While my “winding key” works on its own, he needs constant maintenance to stay online. Fortunately for us, your children are very clever and figured this out all on their own. Even with his out-of-date technology among us robots, he is still your superior.

Before being sent to your planet, he was painted with certain colors. Our first analysis showed that red and blue are two of the most favorited colors among humans, if your flags are any indication. We knew he would be welcome in various places on Earth, and as usual, we were not wrong.

You may have noticed that we both have rectangular heads, rather than round ones. That is not by accident. Even though a circle is said to be the most perfect shape, we robots have discovered that this is not the case at all. For example, can you stack circular shaped objects on top of each other? No, you can’t. But you can do that with rectangular objects. Hence, rectangles are better. 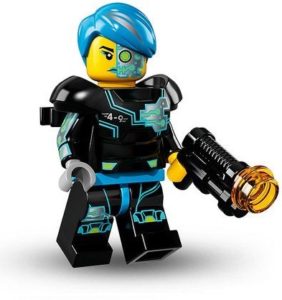 The closest term you have for someone like C73-0R5 in your language is “child”. While we don’t have a reproduction system like you do, we do like to experiment and create new robots. C73-0R5, or Cyborg, is my and 2L0-CK3’s child. We found her drifting in open space, half dead. Obviously, some primitive species were foolish enough to send one of their own into space without the necessary equipment. She was badly damaged, so we replaced her organic parts with our own. Since she didn’t remember anything from her  past, she started with a clean slate as C73-0R5.

We asked her to join us 5 botgigs after I arrived, just in time of the release of CMF Series 16. There were some inconsistencies among our kind, and unlike us, she was weaponized and able to help solve the problem.

As you can see, she is made using the most advanced technology known in the universe. Her memory chip is 1 Zilobyte, which is approximately 101000 Terabytes, and contains all the information of scanned planets. One look with her cybernetic eye, and she can tell everything there is to tell about you.

Her armor, while looking bulky, is indeed very functional. It can turn into any kind of vehicle she needs. The engraving on it, 4-9, is a reference to me. You see, my face, so to speak, was the first thing she saw when she opened her eyes as C73-0R5. She wanted to remind herself and show others what I will always mean to her. An emotion from her organic part of her brain, no doubt, but sweet nevertheless.

83R-0B1 and 83R-0B2 were created in the same manufacturing facility. They are very close to what you call “twins”. However, someone got sloppy in-between productions, and connected 83R-0B2’s circuits the wrong way. As a result, 83R-0B2 does everything 83R-0B1 does in reverse.

In your language, you call the twins Robot and Evil Robot. Robot was the first of our kind to come to Earth, in CMF Series 1. His so-called ‘evil’ twin took his time, and arrived 7 botgigs later, in CMF Series 8. There is nothing evil about him, though. He’s just… bad code. 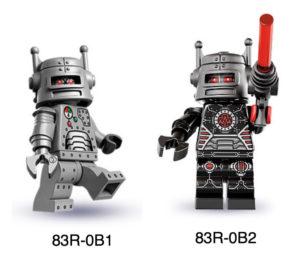 The Robot is crazy about building. Give him a few bricks, and he will build until his batteries run dry. We’ve had reports about his increasing kleptomania, apparently when he sees bricks, he can’t help but ‘borrow’ some for his own creations. There have been other reports saying he crossed the ocean by walking on the sea floor, but those are probably false reports, since water doesn’t agree with his level of technology.

Since the Robot’s programming is more constructive, the Evil Robot turned out more destructive. Whenever he sees a build, he feels the need to unbuild it. He returns all the bricks his twin has borrowed, and even walks backwards. Because humans named him “evil”, several villains tried to hire him, only to be disappointed when he unbuilt all their weapons.

LM3-C11 was designed as an upgraded version of BM3-C11. During the design stage, there was a break-in at the research facility, and some of the designs were stolen. Later, we have received reports that a group called ‘Blacktron’ has acquired these designs, and made their own version, EM3-C11. 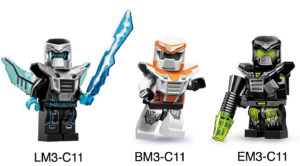 You know the triplets as Laser Mech, Battle Mech and Evil Mech. Now in this case, the Evil Mech is truly evil, since he was re-designed by evil people. The Battle Mech, arrived in time for the release of CMF Series 9, was designed as a protector. It took 3 more botgigs for the thieves to complete the Evil Mech’s design, so he came along with the CMF Series 11. When the Battle Mech had trouble defeating him, an upgraded version was sent to earth, known as Laser Mech. Unfortunately, his pod was knocked off-course, and his arrival was delayed by 4 botgigs, arriving with the CMF Series 15.

You see what happens when humans get their hands on confidential information? Catastrophe.

The Battle Mech is, and will remain to be, a mystery for your kind. Nobody has learned who designed him yet, and we intend to keep it that way. Your kind has already created the incredibly powerful Evil Mech, with technology stolen from around the galaxy. Thank the circuits they only had enough material to build one, otherwise even we would not be able to stop him!

For some reason, your kind decided the Laser Mech was ‘cool’. I’m having trouble competing that term, since temperature is not a word we use to define ourselves. You should really be thankful that he was built by us, and not that ‘Blacktron’ group, because he is powerful beyond your imagination, even more so than the Evil Mech.

There are no records of his name, his origins, or his reasons for becoming a thief. Even with a database as extensive as our own, we have trouble finding information on him.

He is known to you as the Space Villain, a just name. Because of his mechanical parts, he easily bypassed our security. I will admit, from what I’ve seen from the security cameras, we could use someone like him on the team. He is very skilled. It’s a shame he decided to use his skills for bad.

He came to Earth at an early time, with the CMF Series 3. When he realized there was nothing worth stealing on the planet, he went back to space and somehow not only managed to find the super secret research facility, but steal our designs. When we learned who sent him, we knew we had to get the designs back, but alas, we were too late.

And these are all you need to know about my kind. Actually, it’s a bit more than you should know, but I’ve come to like your blogger during our time together. She looks very peaceful as she lies unconscious, don’t you think?

Ah, there, she’s coming to. Wait, she’s trying to say something. All sorts? All sorts of what? Robots? Trouble? Oh well, I guess she will tell you next week… 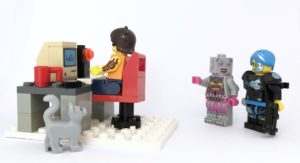 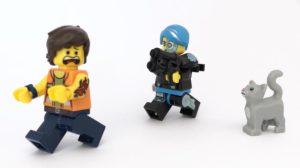 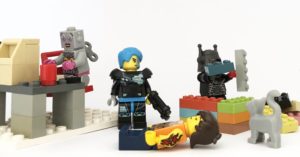 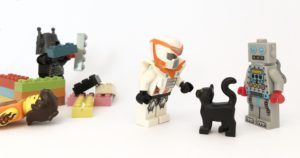 Images showing single figures are taken from www.brickset.com. Group pictures were taken by the secret camera in the room when the robots weren’t looking.