Ladies and gentlemen, welcome to another Minifigures through time… wait, we did that. In fact, we finished it. Right, the animals! No, no, we did that too… hmm, I’m getting forgetful in my old age… oh wait, I know, today we’ll take a look at the collectible LEGO Space minifigures!

Let me warn you, though, I tend to get a bit critical when it comes to LEGO Space. You see, when I was little, the minifigures known as Classic Spacemen have already come and gone. The first spacemen I had were from the Futuron sets, and to this day, they hold a special place in my heart. The M-Tron and Blacktron sets followed them, and then the Exploriens, Mars Mission, Ice Planet… so I’ve had my fair share of spacemen and aliens. I admit, I was always a pirates & knights kinda girl, but I never said no to LEGO Space sets. I mean, what kid would?

There are over 20 space related minifigures in the CMF series – and don’t worry, we won’t be talking about all of them this week. I have more than half of them, some because I liked them, some because of the blindbag. While I appreciate the variety in general, some of them just don’t feel right. It’s as if they ran out of ideas and someone said “Hey, let’s make this guy again, but in a different color!” Of course, the same thing can be said about other minifigures, too. And in some cases, it would be true. But right now, without knowing their stories, without knowing how they came to be, I think I’m allowed to be a bit critical.

The aliens are by far my favorite space minifigures in the CMF series. They are quite original and honestly, very silly-looking. I can imagine a child go “pew pew” with the so-called evil ones, but I just say “I’m sorry, you don’t look that scary” and burst into laughter.

I usually don’t know the official names of LEGO minifigures. Instead, I give them new names, and they’re usually something between “silly face” and “cool guy” (not very creative, I know). So when I saw the official LEGO name for our first minifigure – Space Alien (CMF 3) – I thought, wait, is there another kind of alien?? I’m still trying to figure that one out, but the Classic Alien (CMF 6) did make it a bit easier to distinguish between the two. 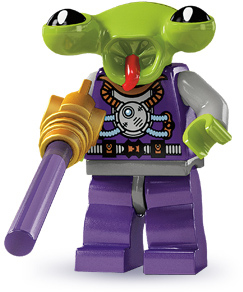 The Space Alien (a.k.a. Tongue Face) tells me he comes from a race of conquerors. He only answers to one king called Squidman, and he proudly carries out his every deed. I have to say, though, his translator may say “conqueror” and “king”, but the way he describes this Squidman character, “criminal” and “thief” would be better suited.

What? You don’t expect me to speak alien, do you? Of course we’re going to use a translator to communicate!

Let’s take him apart, shall we? (Yeah, we don’t need to translate that)

He is the first collectible minifigure to have a moulded head, but it has been used before in Squidman and Squidtron, although the color of those is gray. He has a very sci-fi looking purple and gray outfit, complete with a very complex breathing apparatus on his chest. His ray gun has been used by aliens and humans alike – even sponges, apparently – but only he has it in this color. And of course, it fires purple rays.

I think continuing the story of Squidman with a similar looking minifigure was a good idea. It works for those who are familiar with it and those who are not. It was the first moulded head, so it gave fans and collectors a sneak preview of what may come, and others followed (moulded heads, not other aliens of this race – thank goodness!)

Now this guy, if you ask me, is a lot creepier than the first one. He appears to have all the features of a classic alien – hey, I just got that! So that’s where the name comes from…

Unlike Tongue Face, he doesn’t need a translator. No sir, his civilization is way more advanced. Either that, or he has spent a little too much time on earth. I swear I saw him reading a tabloid the other day! He told me it’s been a while since he communicated with his home planet, but he suspects they send him encrypted messages hidden in plain sight. No matter how much I tried, I couldn’t persuade him otherwise.

Ally here is the second alien of the CMF series, but the first to have a unique moulded head. He is gray all over, with dark gray hands and hips. I have a feeling that he’s actually naked, or wearing a reeeeaally tight spacesuit, since we can see his muscles. Well, at least he has the decency to put some pants on, so I guess that’s a plus. Like Tongue Face, his white ray gun is unique to him, and it fires green rays. He has large (and really creepy-looking) eyes, and unless I’m mistaken, he’s not too happy to be here.

As far as aliens go, I think he is a good addition to the many races of LEGO aliens. The head mould and the color is very fitting when we think about all the alien sightings, which, apparently, was what LEGO was aiming for.

The Alien Trooper (CMF 13) reminds me of someone, but I just can’t put my finger on it…

Anyway, he tells me that he’s here to conquer the world! Seriously, what is it with aliens and conquering, anyway? And why earth, for that matter? First, it is well-guarded. Second, you can’t even breathe here, you little green idiot! Go find an uninhabited planet where you don’t have to walk around with masks or heavy breathing apparatus all the time!!!

Sorry, I got carried away a bit. What was I saying? Yes, conquering, right. That was his purpose, but he spent a little too much time in space, and when he arrived, he found out  that his “advanced” technology wasn’t that advanced anymore. Instead, everyone who saw him started laughing. I’ll tell you why, too. His spaceship moves as fast as a horse carriage, and his huge blue eyes reminds everyone of those cute kitten videos. So instead of going “Aaargh” people say “Aaaww” when they see him.

He did tell me of his very secret plans to unite all the alien minifigures and then conquer the planet, but somehow I don’t see that happening.

Troopy here, looks the least threatening of the three, with his calming blue outfit and blue eyes. He has some kind of alien tech on his suit, which I’m sure is only useful for breathing and translating. His blaster gun has already been used by Robo-police and as dino-tranquilizer, so it’s old news to us earthlings.

His head, on the other hand, has a different story. For a while, it was unique to him, but recently it has appeared in another set. I have several theories on that matter. They may have gotten enough of his conquering promises and beheaded the little guy, and let him rot a bit hence the change of color. The astronauts may have found another one of his species, and brought some of it back for some research. Or he has become such a hit that they decided to make candies in the shape of his head. Personally, I’m rooting for the last one, since the other two sound a bit horrifying.

All in all, he is my favorite of all the alien minifigures released in the CMF series to this day. Even without having a visible mouth and eyebrows, LEGO has managed to create a helpless/confused expression, which goes along with his story.

Now there’s a girl with vision! She’s not interested in mere planets, she wants the whole universe! You go girl! 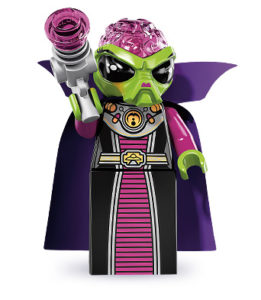 Sources say that the Alien Villainess‘ (CMF 8) name is way too hard to pronounce, and not meant to be heard by anyone but royalty. When I look at her, the first thing I see is the brain, so she becomes Brain Lady.

She’s not the first of her kind (nor will she be the last, she adds). Her father had a vision of enslaving mankind and using our brains as a power source, which he passed onto her with some upgrades: She wants to enslave the universe. It’s not easy, though, especially with all those so-called heroes following her around and ruining her plans. But does she give up? Pffft, please. She doesn’t know the meaning of the word! (no, seriously, there’s no alien word for “give up”)

Her head has been used in two other minifigures before, the Alien Commander (her father) and Alien Android (his minion). But, she says, the brain of the he-aliens are green whereas the she-aliens have a more feminine, pink one. They also dress in shades of purple and magenta, apparently it brings out their features. Capes are only worn by royalty.

Even though she plans to bring the universe to its knees, I like the idea of continuing a previous LEGO Space theme into the CMF universe, like they did with the Space Alien. Besides, we all need some female villains from time to time, don’t we? 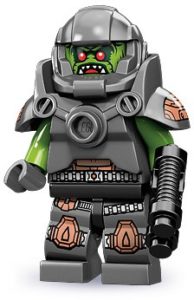 An Alien Avenger (CMF 9), huh? I don’t think he’s like the Avengers we know… And lucky me, he comes with his own name: Shami.

Shami comes from a big family – huge, in fact. He has 4,999 siblings, all identical. I don’t even want to imagine what their mother looks like! But there are rumors, you know, horrible, terrible rumors. They say that Shami and his siblings were men once, in fact they were tasked with keeping the peace. A small squad got infected on a mission, and unknowingly, brought the virus to the mothership. Slowly, everyone turned, more vicious than any  human (or alien) can be, always looking to destroy, ransack and pillage. Their skin changed color as did their armor. Once, it was the color of navy blue, symbolizing discipline and order. Now, it has become gray as the wearer has become a mindless war machine.

Of course, those are just rumors. If you ask Shami, he was born and raised on a planet in constant war, that’s why he always has to be ready for anything.

Shami’s armor has worn by others before him – usually villains. His helmet, however, only appears in one other minifigure, which may mean the rumors are true after all! He has written his name on his torso, also similar to that other minifigure, and has the same weapon, too! Ladies and gentlemen, I fear that he is, in fact, an infected version of…

Alas, this article needs to come to an end. I hate to leave matters like this, but I’m needed in the disinfection chamber, so I don’t turn into an alien avenger myself. If you want to read the rest of the LEGO Space story, make sure you’re here next week, same alien time, same alien channel! 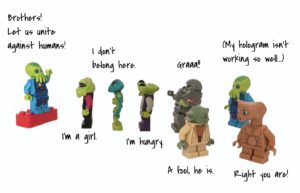