Halloween is coming. Are you ready? Or it might be better to say, are your minifigures ready? If you forgot to buy some spooky figures or accessories for them, you can still do it on FirestarToys Halloween shop. As you probably know, LEGO has one theme dedicated only to minifigures. The theme name is Collectible Minifigures and until today, 28 series of figures have been produced. One of them is perfect for Halloween. Series 14, alternatively called “LEGO Monsters CMF Series” was produced in 2015 with number 71010. It contains 16 minifigures, and I decided to take a closer look at them. Although it had been four years since its release, this series is still one of the most wanted, especially at this time of the year! 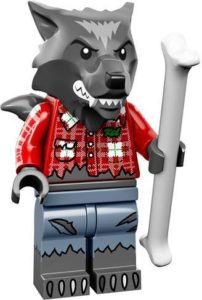 What is Halloween without a werewolf? LEGO made five werewolf figures (excluding the microfigure from Heroica) but in my opinion, this one is easily the best. Head, torso and legs are really detailed. Ripped pants and shirt perfectly fit this figure, you can imagine the transformation process from human to wolf! All the three parts mentioned above are still exclusive for this figure (you can’t get them in any other figure). Fluffy tail is a nice addition and works well for wolf too. This bone started to appear in more sets, but for me, it was the first time I get it.

Ahoy! Who said that a zombie can’t be a pirate? Or that a pirate can’t be a zombie? Obviously, some zombies love to take a costume for Halloween party, although many people choose to be zombies and they don’t need a mask to be them. Zombie Pirate looks funny and unique. LEGO never made Zombie Pirate head before. Speaking about the other parts, they can be used to build your own pirate captain if you already don’t have one or you need another. In that customisation, I will only replace beard with reddish-brown one. 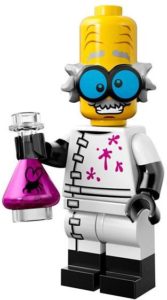 The first thing to catch your eye when you see this figure is head. This figure has a normal LEGO head, but its headgear is a little bit different than usual. To be more precise, headgear is actually extended head with goggles. Laboratory coat looks nice too. Clasps and stains are giving even a more spooky impression of this figure. I would like to mention bottle with magenta fluid. Black Fly pattern on it is an interesting detail. 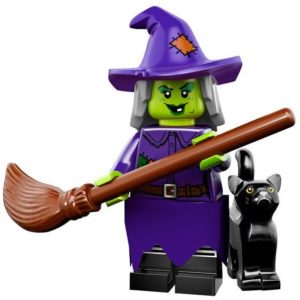 Every witch has a broom and a cat. This LEGO witch no exception. The cat is very simple, black coloured, but I think it is a nice addition to this figure. Broom is the good old part which is still very accurate. Dark purple colour is perfectly chosen for this figure as well as lime green colour for the head. Hat-hair is exclusive to this figure and I love orange patch pattern on it. 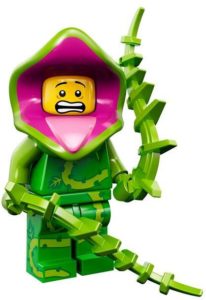 A plant and a monster in one! As you can see, this figure has a human LEGO head, so that means this LEGO guy is wearing a costume like many of us on Halloween. His facial expression is so funny. The headgear is the most awesome part of this figure. It can be used to make some bigger plants in your LEGO garden, or even to create scarier monsters. If you ask me, the torso and the legs would look better in lime colour (the same colour as the headgear) than in bright green. 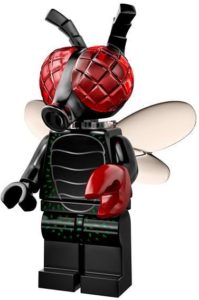 This figure looks more cute than scary to me and I don’t know why LEGO decided to include it here. However, that doesn’t mean that this figure is bad and useless. Black and red colour combination work really well here and the insect head can be used for creating scenes with Marvel superhero Ant-man. Wings are always a welcome addition, love how LEGO made this part, especially in trans-black colour like here. 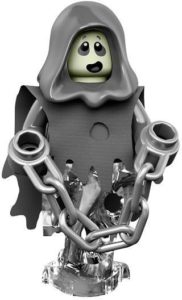 This lovely figure reminds me the Dementors from Harry Potter movies. I must admit that I am fascinated by almost all the parts in this figure. I said almost because the torso is simple, monochrome, without any pattern. Speaking about other parts, cape cloth looks really nice. I love the holes on it. Glow in the dark head is so funny and the hood headgear gives it even a better look when you put them together. Ghost legs are only available in Silent Mary (71042) set except for this figure which makes them more desirable. 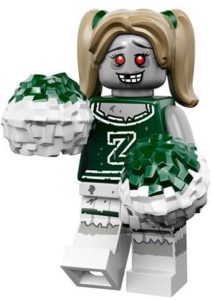 Zombies are everywhere, even at sporting events so they need cheerleaders! You just got the opportunity to add another zombie to your collection. Love how this figure combines dark green and white colours, which look nice together. Mud splotches can be seen on the legs and torso, hair is so lovely, and the head is exclusive! Don’t forget the pom-poms – infallible accessory for every cheerleader! 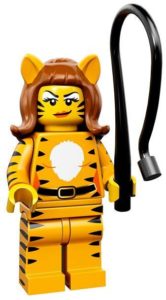 Costume figures are always so funny, especially when you decide to organise a party for them in your LEGO town. Comic book fans will notice that this figure resembles Marvel’s Tigra or DC’s Cheetah. Printing details on the face, torso, arms and legs are nicely done. Colour is a little bit unusual for the figure – bright light orange – but works very well. 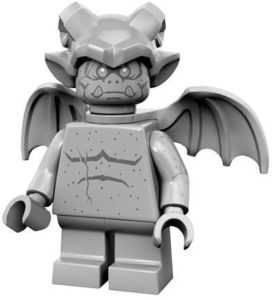 One of the most interesting figures in the series is definitely the gargoyle. The figure has short legs and a cool wing piece, while the torso is decorated with a crack. Teeth on his face are detailed too. Love the shape of horns on his head. You can spot a crack on his headgear and stone pattern on the whole figure is very realistic. I can imagine using this figure as a roof decoration on the buildings. 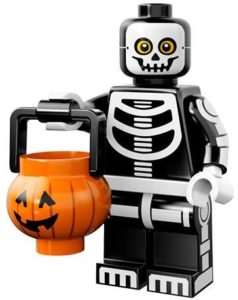 Knock! Knock! Knock! Trick or treat! Choose! Here is another costumed figure. This time we got a skeleton, one of the most wanted Halloween costumes. The figure is black with white bones decoration which looks really nice. You can see the classic yellow LEGO head around his eyes! I love this detail! He comes with a small pot for collecting candies! That is so cute! I think we need more of them in this series! 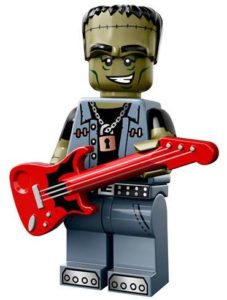 Halloween party without some music? No way! Frankenstein’s Monster is dressed up in a rock band costume. That’s basically what this minifigure represents and he looks purely awesome. Love the torso print – padlock on a chain over his t-shirt. He even has a band – you can see their name on the back – Shock ‘n’ Roll. Red guitar is nicely printed and can be used in creations where you have bands. 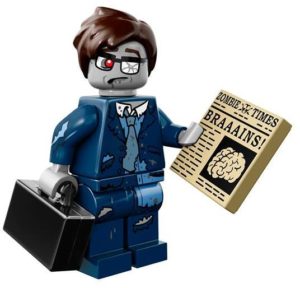 Everyone thinks that zombies have fun all the time, but that isn’t true! As you can see, there is a businessman in zombie world too! The figure is highly detailed, with a zombie newspaper, beat-up suit, smashed glasses, and messy hair. Definitely, a look which fits a zombie. The head is my favourite part of it. Glasses are giving a fantastic touch, especially with the shattering effect on the right lens. 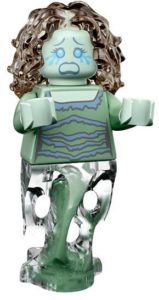 We are almost at the end of the series and we have one scary figure to take a look at. In case you didn’t know, banshees are typically ghosts who wail and shriek when sadness or misfortune enters a house. Elements you get in a blind bag are amazing. The hair is a new element coloured in transparent brown while the head has an amazing print, and the light aqua colour only helps the effect. The tail is transparent too, with accents of sand green. In my opinion, this figure is the perfect recreation of a banshee. 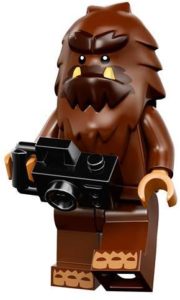 Bigfoot as a LEGO minifigure? Yes, please! We now have the opportunity to add him to our collection. The headpiece is the best part of the figure, although we have seen it in white (Yeti), we can now get it in reddish-brown. The torso is plain, legs have printed feet on them. The camera is included as an accessory, which is really cool if you have in mind the fact that people unsuccessfully trying to take pictures of him. Maybe he has a camera to take a picture of the Halloween party attendees. 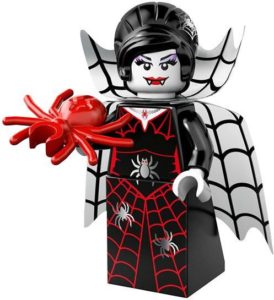 I will end this review with the queen of the series – Spider Lady! She looks very creepy in the webbed dress featuring silver spider detailing. Cape looks perfect for her, and white color with black web makes amazing contrast! Her face is nice, with her shaded purple eye shadow and her calm but sinister smile. Red spider is included, too. For me, it is the first time to get it in red because a black version is more present today. I am sure I won’t be wrong if I said that this is one of the best figures in the whole series.

That’s it! I hope you find some informative and/or funny facts about this series. I tried to pay attention to some of the nicely painted parts which can be used in your own creations, too. Let me know if I was successful in the comments section! You can share your thoughts about these figures too! Do you have them, or plan to buy some of them? Happy Halloween! 🙂

All the pictures are from Brickset except the featured image (buildandplay.com.au).

I Think I’m Living with a Superhero – Part 2