Hello and welcome back to another Minifigures Through Time article!

So far we’ve looked at Romans and Egyptians, Japanese and Huns. Today, we’ll move on a bit west – not too much, just a little – to a time where there were kings and queens, wizards and knights. That’s right, we’re going Medieval today! 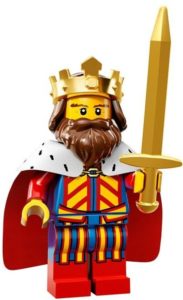 The first – and obviously, the most important – figure we have today is the Classic King (CMF 13). Tell me, can’t you just smell his royalty? That crown, that sword, that beard… Yes sir, he definitely is a great king!

He wasn’t always, though. He had to start very small, with only 14 knights loyal to him, and together they built their kingdom brick by brick. You see, his father was the Lion King, the fairest ruler the kingdom has ever seen. He had enemies, though. The mysterious Dragon Queen was so jealous of this fair ruler that she constantly kept sending her Dragon Knights. The Lion Knights fought bravely, and usually won the fights, too.  However, with evil wizards by her side, she continued her invasion force and one day, the king fell. His golden sword, along with his crown, was passed onto his son, who was but a young boy at the time. The former king’s knights took him somewhere safe, where he would prepare for the fight with the Dragon Queen until he was strong enough.

And not long after, he was ready. He took his knights and marched to the Dragon Queen’s castle – only to see she was nowhere to be found. At first he felt bad, he had no kingdom and the only enemy he’d known was gone. However, he soon realized this was a good thing! His kingdom could be built from scratch, and there was no one to oppose him! And so they started gathering bricks and building his new castle. 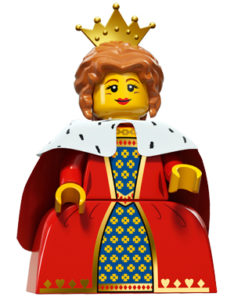 Of course the act of castle building, the potential rise of a new monarch, never goes unnoticed. The Queen (CMF 15) was among the first to notice him. This is not the Dragon Queen, of course. No, this is a gentle queen, and it wasn’t long until the king realized he can’t be a real king without a queen. They decided to join their houses, and the Queen left her old colors behind and changed into something that will be in harmony with her king.

Speaking of colors… let’s have a more in-depth analysis of the king’s and queen’s outfits and accessories first. As you can see, they both have matching cloaks, which of course makes sense since the queen got hers as a gift from the king. Red cloaks with white, furry collars, for both displaying their wealth and keeping warm. Being royalty means having a crown, and they both have that too. The king’s crown is the first ever to show the royal hair. Since him, only two were brave enough to imitate his style (although one of them is his cousin so he’s good). His beard, while not the first of its kind, is unique as well. Nobody before him, or after, has a beard in that particular color. His sword, as mentioned above, belonged to his father. As for his outfit… well, he has always been fond of blue and red, and he’s bold enough to display it!

From time to time, but especially before going to bed, the Queen takes off her crown – not very comfortable while sleeping. Her hair is done every morning by her handmaidens. There has only been one other who has the same hair, some weird Calamity Drone from the future, but hers is of a different color and she’s from the future, not the past, so the Queen likes to think she’s the first one with that hair piece. Now, the most unique thing about her is her huge dress. Her tailors worked hard day and night to create a dress fit for a queen, and she found it so beautiful, she hasn’t taken it off since. While it has matching colors to his king, red and blue with golden flowers, it also displays her ancestry – for she is the granddaughter of the Queen of Hearts on her mother’s side and Queen of Diamonds on her father’s.

Being royalty means having a royal family, right? After a while, both the King and the Queen realized they needed an heir, and made one. And another. And another. And another (the king insisted on having a son, how could have he known there would be three daughters before him??) Yeah, the Queen was not too happy about that. But no matter how frustrating things got during her pregnancy, all her troubles flew away as soon as she held her baby in her arms – and of course, were replaced by brand new ones. 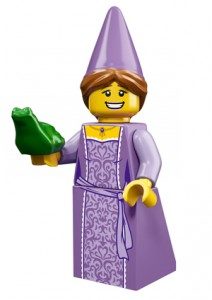 Their first born, was nicknamed the Fairytale Princess (CMF 12) because of her head always being in the clouds. She had this absurd fantasy that if she kisses the right frog, she herself will turn into a frog and have a grand adventure. No matter what her parents said, she kept bringing frogs to the castle, even when she was little. It was her behavior that led to the invention of a new Fairytale frogs cuisine! They had to get rid of all the frogs somehow, right?

The princess wears a lavender gown with beautiful embroidery, and a necklace given to her by her mother, secretly enchanted so no magic will ever turn her into a frog. She has a matching lavender hennin, or a cone-shaped headpiece, with a white ribbon. Her hair is braided and has the same color as her mother’s.

As for her siblings… the oldest of the remaining three, imitates her older sister in every way except her behavior. She wears the same dress, but she doesn’t like braids so she just combs her hair and leaves it as it is. Secretly, she hopes that one day her parents will realize she is more fit than anyone else to become a queen.

The youngest sister is the troublemaker – and has no intention of becoming a lady. She has been following his father’s knights since she was a child, and practices her sword fight with them whenever her mother isn’t around. While she has a similar outfit to her sisters, she prefers to wear pants – much easier to fight in. She has dark brown hair like her dad, and it’s a miracle if it looks anything but shaggy.

And last but not the least, the heir to the throne – the prince! He is a bit spoiled, being both the youngest and the only boy, but he has a good heart. Even though the queen objects constantly, the king insists on making him wear whatever he himself wears. He is the spitting image of his father, save the beard.

A Night and a Visard

Apart from the royal family, there are three very important members of the king’s court: The Heroic Knight (CMF 9), the Wizard (CMF 12) and the Jester (CMF 12). The knight is a few years younger than the king, in fact he is the son of one of the knights who hid the king when he was a child. He is… not the brightest bulb on the porch. There are stories of him rescuing a dragon from a princess, you see, sometimes these situations get just too confusing for him. And no matter what, he just couldn’t learn how to spell properly. Nevertheless, he’s one of the bravest knights the king has, and the people love him. 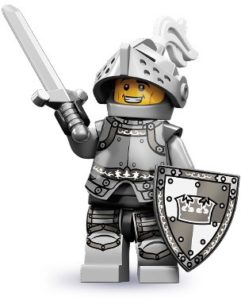 The Heroic Knight has a shiny armor and a helm, along with his shield and sword. Even though he wears a simple gray shirt under his armor, you can see that the armor itself is very detailed. Since the King has not yet chosen a sigil for himself, the knight has painted a crown on his shield, showing that he serves the crown. His sword is a close replica of the swords the ancient knights used to have, with some improvements. The knight is one of the first Minifigures to use that sword, and he takes much pride in having a sword similar to his ancestors’. His confidence can clearly be seen on his face, and he has been caught flirting with the oldest princess once or twice, but unfortunately she has no interest in him since he’s not a frog.

The Wizard is a strange one – during one of his trances, he had a vision of a creature wearing red robes and a blue hat with stars and a crescent moon on it. Although he wasn’t able to tell what the creature was, he was inspired by its hat and decided to wear a similar one himself. He is the first and only wizard to wear that type of hat, although it has appeared once in another castle. Since red is not his colour, he decided to have blue robes with a similar pattern. They also go nicely with the jeweled stone he has on his staff and his dark purple cape (which also has stars on it). Fashion is very important in the wizard community. 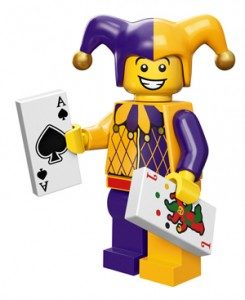 The Jester may seem the least important of all the mentioned characters, but this couldn’t be farther from the truth. He has the most important role of all: Bringing joy. And he does it so successfully that  whenever he’s around, everyone starts laughing. He tells the best jokes, he knows the funniest puns, he is a master of wordplay… but he has one flaw: He starts laughing before the joke is over. Most of the time people don’t even get to hear the joke, but join his laughter anyway because he’s so cheerful.

There haven’t been many jesters before him, in fact he only knows of a few when he decided to become a Jester, he looked them up, how they dressed, how they acted, what accessories they had… and decided it was time for a change! The world needed more variation, and he created it by being the first jester ever to dress in orange and purple, instead of blue and red or white and red. His outfit and hat are very similar to the traditional jester-wear, but he colored the pompoms on his hat gold. He is, after all, the King’s jester!

Next week we’ll take a look at the not-so-friendly characters in the kingdom. Same royal time, same royal channel. Oh, and the Jester wanted me to tell you this before I finish up: “The people stand up for royalty. The queen sits down for royal tea.”

Summer Minifigures: Fun in the Sun

A Critique of the Upcoming LEGO CMF Series 19