May the Power protect you. 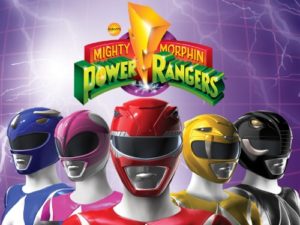 1993. August. Something blows my six-year-old mind. That something? Mighty Morphin Power Rangers! My aunt Jane is a terrific aunt. She has always looked after my siblings and I and when I was little, we used to go to her house on weekends. I suspect the visits were to give my parent’s a break. Anyway, we were there. I remember she would order a pizza for dinner, and while waiting, we would sit in front of the television. First up? The 1960’s Batman starring Adam West and Burt Ward. Immediately following? The brand new Power Rangers.

My favorite was the Black Ranger, and I had a crush on the Pink Ranger. I loved every time the Rangers would morph and start kicking Putty butt. Certainly my fascination with martial arts probably began then, and led to original Chinese Jackie Chan movies in my teens. Devastation followed the end of the first season when the Green Ranger lost his powers. Shortly that sadness turned to elation when he returned in Season 2 as the powerful White Ranger! When the original movie came out in 1995, I was all over it.

After ’95, I grew into a teenager and Power Rangers was a little less cool to me. As a teenager, I couldn’t like things I liked as a kid, and for me, LEGO was the exception, but I still didn’t publicize it. Sadly no LEGO Power Rangers existed anyway that I could play with, as child or teen. 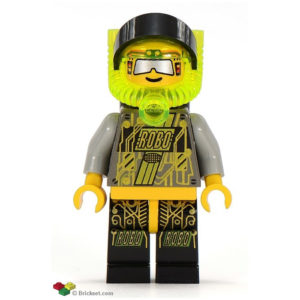 Those were fun times. While my main interest, Star Wars, dominated my play time, I did long for LEGO Power Rangers. I tried once or twice to build something in that theme, but lacked the bricks, and more importantly, didn’t have many minifigures. Interestingly, I did have two that came close to approximating two of the Power Rangers in my mind. Around that time I had two sets from the LEGO RoboForce theme. The minifigures that were included were red and yellow. Those two became surrogate LEGO Power Rangers for me. Their RoboForce vehicles, the 2152 RoboRaptor and the 2151 RoboRaider became my alternate Power Rangers’ Zords.

Given my lack of other possible Power Ranger minifigures and no more Zords, I didn’t go far in my exploration of a LEGO Power Ranger theme. Sadly, that idea remained dormant for some time. Star Wars returned to my attention in 1998 as it was the first licensed theme LEGO announced.

However as I was recently exploring a list of topics to write about here on the minifigures.com blog, I read one that caught my eye: “LEGO Power Rangers”. Huh? I thought. There is no such theme. And no, there isn’t, at least, not currently. (Fingers crossed, LEGO!) But reading that did, I must admit, get my blood pumping a bit more. What if there were a LEGO Power Rangers theme? How cool would that be?

With the recent release of the LEGO 21311 Voltron clearly a MegaZord would not be a stretch. Individual Zords would definitely work at the $50 or $75 price point. Smaller sets with the Rangers fighting Putty Patrols would be genius. I mean, come on! This sells itself. And as 80’s and 90’s nostalgia is really big in other media right now, it is the perfect time to resurrect the original Rangers in brick form. Ah, if only. 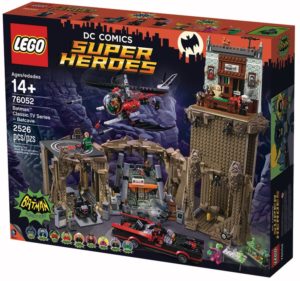 The other franchise that recently re-ignited my love of childhood things was the 76052 Batman Classic TV Series Batcave. (Holy word salad, Batman!) That lovely bit of history in LEGO form, released three years ago in 2016, was an instant need. I bought it the following year, and loved every single second of the build. It is a terrific set, and if you love classic Batman, you owe it to yourself to own it and build it. Everything is included, from the bright red helicopter to the old style computers and, of course, that incredibly awesome Bat-Mobile!

Sadly, I was forced to sell my set, though I did keep the Bat-Mobile and the Batman and Robin minifigures. No way could I let those go!

Every time I saw that classic Batcave, my eyes would light up and I would be a child again. I would swoosh the helicopter, let Bruce and Dick slide down the poles and transform into their crime fighting Dynamic Duo selves. I enjoyed immensely the recreations of Joker (complete with mustache that Caesar Romero refused to shave!!) and the sexy original Catwoman, ridiculous Penguin, and my favorite, the Riddler! (What is made of soft plants and yet is hard as rock?*)

Recruit a team of teenagers with attitude!

Consequently as soon as I have the cash on hand again, I will be rebuying the classic TV Batcave and giving it a place of honor in my LEGO collection. Hopefully, it could even sit next to a LEGO Power Rangers’ Zord. But, all is not lost. If you are a LEGO collector, there may be an option for you. A fellow FireStarToys.com writer for that blog and this one, Jack, is cooking up a fantastic feature all about something Power Rangers. Next week, on the 16th of May, look for a Part Two post about what he has in process. I promise, it will be exciting!

Furthermore speaking of the 16th of May, the following day, Friday May 17th, the third John Wick film will be released in the US of A. I am currently running a contest here on the minifigures.com blog with a grand prize of your very own John Brick minifigure, provided by yours truly. In order to win that figure, all you need to do is build a 16×16 home for John Brick, and send me photo. Full contest rules and information is available via my previous post on this blog. I have yet to receive an entry, so if you, YES! YOU! send in a picture of your build you could win without competition. I would still build a quality home, however, as there may be more than one “you” reading right now.

Whatever you build: I look forward to what we can build together!

Don’t forget to check out the second part of LEGO Power Rangers!