If you are reading this blog post, you definitely heard about LEGO Minifigures and probably have at least two of them in your collection. They are almost everywhere. Until today, LEGO produced around 7.8 billion figures. You can get them in various LEGO themes, and in different forms with different accessories (cowboys, aliens, astronauts, Star Wars characters, etc.). But I want to draw your attention to another kind of figures – LEGO microfigures and LEGO nanofigures and show you their advantages over classic LEGO figures. In this blog post, I will give you some interesting pieces of information about both microfigures and nanofigures including ideas about how you can use them in your creations.

Unlike classic LEGO figures, which have been in production for over 40 years now, microfigures are much newer. In 2009, LEGO released a new theme called LEGO Games. Every LEGO set in the theme was designed like a board game. In these sets, you got everything you need to play the game: a board (of course, you needed to build it first), LEGO die and microfigures. Microfigures are a single piece with head, torso, arms and legs. The head has a single stud on top. Here are some pictures of microfigures:

We can divide LEGO board games into two big groups in terms of license: unlicensed (meaning it belongs to LEGO) and licensed board games (for example, Harry Potter). Because the LEGO Games theme is retired, and some sets are really hard to find, I will write a little guide which microfigures you need to get if you want to start your own microfigure collection or expand an existing one.

Let’s start with licensed ones. Five different licensed sets were produced: Harry Potter, Star Wars, The Hobbit, Batman and The Lord of the Rings. Games 50003: Batman and 50011: The Battle of Helms Deep had LEGO exclusive availability, so minifigures from those sets are really hard to find or too expensive. I suggest skipping them and start with sets with normal availability.

If you are a big fan of any of another mentioned licensed theme, I think it will be awesome to have your favourite characters in microscale too. Even if you are not, I think you definitely need to get at least the main microfigures from those themes. For example, when we speak about Star Wars, Luke Skywalker and Darth Vader are two of the most important characters in the whole Star Wars saga, and it will be cool to recreate some moments from movies in microscale too. The most recognisable Hogwarts trio, Harry Potter, Hermione Granger and Ron Weasley are a must have in microscale versions for every LEGO Harry Potter fan. Here is a picture with all five microfigures mentioned above:

On the other hand, police officers and thieves from set 3865: City Alarm are a good addition to your LEGO town, which gives you a lot of different playing features like bank robbery, thief capturing and more. Last theme worth mentioning is Heroica. It is based on storytelling like Dungeons and Dragons. I encourage you to think about creating your own board LEGO game. You can use Goblins, Kings or Vampires as main characters of your game. They all were available in Heroica sets, so it is not hard to get them. Of course, you can use licensed microfigures to add more fun – just imagine a situation where Darth Vader needs to fight against Vampires!

I suggest you to take a look at FirestarToys site for Microfigures, because they always have them in stock. 🙂

Just when you started thinking that LEGO can’t make a smaller version of figures than previously described Microfigures, they went ahead and made LEGO Nanofigures! Let’s first resolve the misunderstanding about names. LEGO Nanofigure is a fan based name for Statuettes or Trophies because they look like a very small minifigure.

Originally, the part was released in 2010 with LEGO Collectable Minifigure series 2 Karate Master as his Trophy and that is how it got its name. Since then, statuette comes in 12 different colours and it is present even in today’s sets. Some statuettes are not monochrome but represent characters. That is why they are called nanofigures. It is really impressive how detailed they are despite their small size. I must admit that I often check FirestarToys website and search keyword nanofigure because they always have something interesting, even custom printed nanofigures! Nanofigures usually come in really big sets, so this is a perfect opportunity to get them cheap!

Two sets are most recognisable when we speak about this measure. LEGO Marvel SHIELD Helicarrier (76042) contains 2996 pieces including five nanofigures (we count nanofigures and microfigures as one part unlike normal minifigures because we can’t separate them to parts). Nanofigures are Captain America, Hawkeye, Iron Man, Nick Fury and SHIELD Agent. Hogwarts Castle (71043) is even bigger with 6020 pieces. It contains 24 nanofigures, and this is the biggest number of nanofigures included in one LEGO set ever. Here is a list of them:

The list is really impressive. You can recreate all important scenes from Harry Potter movies with them. By the way, castle interior is really detailed and fully decorated with amazing stickers.

Some characters are perfect for nanofigure size, like Marvel’s Ant-man (in case you never heard about him, he is a superhero with a suit which allows him to shrink his body to a microscopic size) while others just got representation in different sizes. Except examples mentioned above, it is good to mention 21309 NASA Apollo Saturn V (3 nanofigure astronauts) too. But, that does not mean you can’t use them in your creations. You can see pictures of some of them below. 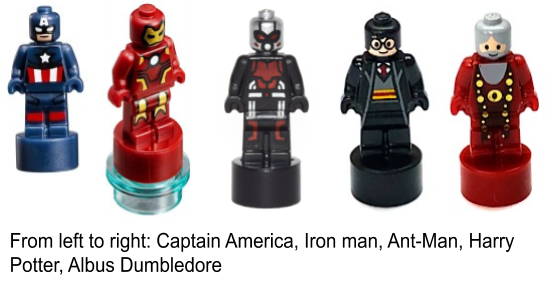 What you can do with Nanofigures

If you are wondering how to use them, a good starting point would be to build some scenes (of course, in microscale) from Marvel or Harry Potter movies and use nanofigures to represent characters. Or you can always use your imagination to make your own story! That is a good choice if your brick collection is not so big.

When you build larger creations (for example in a normal minifigure scale) you can use nanofigures too. It can represent LEGO figures owned by your LEGO figures! Your favourite LEGO figure needs to have its own LEGO collection too, right?

Here is a size comparison of a minifigure, a microfigure and a nanofigure. 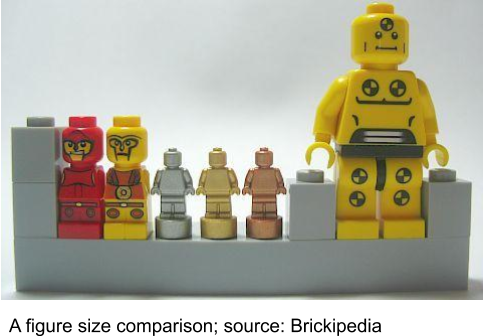 That is all! Hope you find some useful information in this blog post. If you have any questions, please feel free to ask in the comments section. Many thanks for reading!

I Think I’m Living with a Superhero – Part 1