Aah, summer… the sun, the sea, the sand getting everywhere, and… wait, another invasion? Seriously guys, I don’t think I can take this anymore. What’s that? Come in peace, you say. Well, that’s good. I wouldn’t want to spend the day unconscious again. Oh, you want me to address you properly? You didn’t like the idea of me talking about your outfits without mentioning you? Well, that can certainly be arranged. Ladies and gentlemen, please welcome the summer minifigures of the CMF Series! 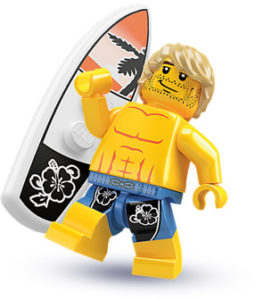 First up, we have three surfers. The Surfer (CMF 2), the Surfer Girl (CMF 4) and the Pro Surfer (CMF 17). Let’s hear their stories, and see how they are connected, shall we?

The Surfer told me he played in three movies, although only one of them is really meant mentioning. He was Surfer Dave in the LEGO Movie, had a brief appearance in the LEGO Ninjago movie, and transformed into Chainsaw Dave in the LEGO Movie 2: The Second Part. He said he had to dye his hair for the films, which, he added, was not fun. It is so hard to imagine some people do that constantly!

Apart from his appearance in the movies, he has become the most popular minifigure as soon as he was seen. He thinks it’s because of his muscular body and cool looks, but the real reason is that his torso was the first printed bare yellow torso. Of course having a handsome face doesn’t hurt either.

The Surfer has two brothers, one younger and one older (more on them later). As his name suggests, he is a big fan of surfing. He has travelled all over the world and surfed at every single beach he could find. He made several friends along the way, and even had a chance to surf with his older brother. One of the things he loves most is painting his surfboard, and since the flower on his shorts is his favorite flower, he painted that on his surfboard, along with a nice palm tree and a sunset.

The youngest brother isn’t in the CMF Series, but he’s also known as ‘Surfer’ and he just can’t stay out of trouble. In fact, one of his misadventures has inspired the Pro Surfer to paint his surfboard as a shark. His little brother was almost eaten by one, but thankfully the Coast Guard arrived just in time to save him. After that incident, Pro Surfer painted his surfboard to remind himself that even though surfing is fun, the sea can be dangerous.

Unlike his brother, the Pro Surfer wears a more professional-looking wetsuit, colored black and red to display how confident he is. After all, if an accident were to happen, it wouldn’t be very easy to see him. But he knows that he will never have such an accident, and proudly displays it.

Let’s hope nothing ever proves him wrong. 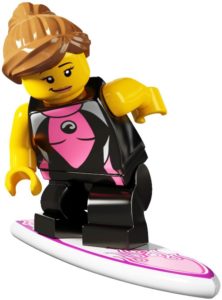 The Surfer Girl is one of the friends the Surfer made during his journeys. Being as cocky as he is, when he first saw her, he told her surfing was not for girls. Soon after he was swallowing the ocean and she was still standing on one of the biggest waves he has ever seen, screaming with joy. He apologized for his arrogance, and the Surfer Girl agreed to show him  a few tricks.

Her wetsuit is similar to the Pro Surfer’s, except that it’s sleeveless. This, she tells me, makes it easier to balance. She wears her hair up in order to see where she’s going. Her dark pink and black wetsuit has a small logo on it showing a wave inside a circle, which is worn by many who spend long hours at sea.

Like the others mentioned here, she also painted her surfboard herself. It has light and dark pink flames on it, showing the world how fiery she is. It also displays that even though people associate pink with ‘girly stuff’, it can be just as aggressive as red when used right.

“Stop struggling, I’m trying to save you!” 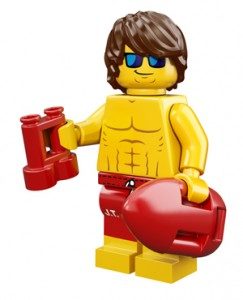 If we have learned anything from the movies and songs, we know that the sea can be treacherous sometimes. Enter Lifeguard (CMF 2) and Lifeguard Guy (CMF 12). Whenever someone is in trouble, these guys appear literally out of the blue and save the day!

The Lifeguard Guy is a mysterious one. The only thing we know about his past is from the stories he tells from time to time, a previous life of action and adventure, but those are very rare to come by. He spends most of his time on the lifeguard tower, looking through his binoculars, to see if there’s anyone in trouble. He always has his rescue buoy by his side, and ever since he has started working on the beach, there haven’t been any unpleasant incidents. 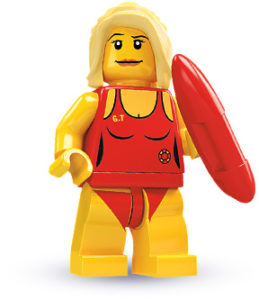 The  Lifeguard, on the other hand, could not be more transparent. Everyone knows that she’s studying to be a doctor when she’s not on the beach. She cares deeply for everyone there, and wants to be prepared for anything. Rumor has it that when she’s on watch, even the sharks feel safe!

Of course no matter how prepared you are, some people are harder to save than others. When the fear kicks in, they start screaming and struggling. Thankfully, both lifeguards are trained to save even the hardest. How, you ask? Well, let’s just say that their rescue buoys aren’t only good for floating.

The name may look scary, but these kids aren’t, believe me. Before anything else, let’s see how it all began, and how they met each other.

The Roller Derby Girl (CMF 9) was one of the best skaters in her town. She won every competition, beat every challenge. However, she had a serious problem: Stopping. Literally. Once she started skating, she just couldn’t stop herself. While this may seem handy during a race, it really wasn’t once the race is over.

One day, after the race was over (several hours after, in fact), she found herself in another city. She had done it again. As she was walking around, trying to figure out where she was, she heard people cheering. She walked towards the sound only to find a girl, very similar to herself, doing incredible tricks on a skateboard. Some of them were so good, even she wouldn’t be able to pull it off.

This girl was the Skater Girl (CMF 6). One look at the Roller Derby Girl, and she knew they were going to be great friends. They got some milkshakes, shared stories, and decided to travel together. However, the Skater Girl wasn’t alone. His little brother, although she hated to admit, had become almost as good as she is, and followed her everywhere. 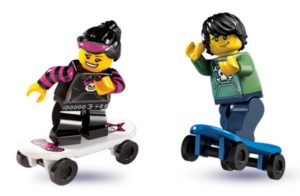 He was none other than the Skater (CMF 1). He loved watching his sister skate when he was a child, and got his own skateboard as soon as it was possible. Knowing she would not want him to  try dangerous moves, he practiced in secret, and became the second best in the city. After careful consideration, and a few tryouts to see if he could keep up, they decided to include him in their little gang. Soon, they were an unstoppable trio, going from town to town, city to city, showing their talent all over the country. 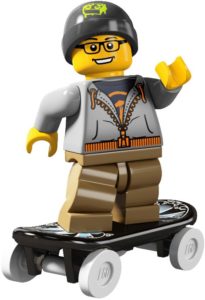 During one of their travels, they encountered a very unusual reaction from the citizens. Nobody was impressed by their moves! It was a first for all of them. Soon, they learned that there was already an incredible skater in town, and everything they did was already done before. They knew right away that this person had to be a part of their gang!

After a few days of skating through the town, they finally met the Street Skater (CMF 4), and were instantly awed by all his mind-blowing moves. They approached him, told him what they do, and invited him to join them. At first, the Street Skater was a bit suspicious, he thought it was a trick to keep him away from doing what he does. But after seeing them in action, he was convinced and decided to travel with them.

With the latest addition, the gang was formed. They still needed a name, though, and suggestions like “Skating Dudes” and “Skatebusters” were very quickly discarded. They needed a cool name.

Suddenly, the Street Skater shouted with excitement: “The Skull Gang!” Everyone was like “Oh-kay, but where did that came from?” He pointed to the Skater and the Skater Girl, they were already wearing hoodies with skull patterns on them, and the face of the Roller Derby Girl could turn anyone into a living skull. That last bit was not appreciated much, but still, they had to admit it was a pretty cool name.

And so they have become the Skull Gang. Those who know them, know that it’s only four teenagers’ way of showing how rebellious teenagers are. Those who don’t know them do get a bit scared at first, but it passes quickly since anyone who sees them for the first time can’t take their eyes off of them.

“Psst… I think they are leaving…”

And with that, we have come to the end of another article. I feel lucky, to be honest, to not have spent the day lying half unconscious on the floor. Besides, the Skull Gang made a private performance just for me, which, I have to admit, was really a feast for the eyes.

For those who are waiting in line to be mentioned… don’t worry, we have plenty of space to talk about you next week! 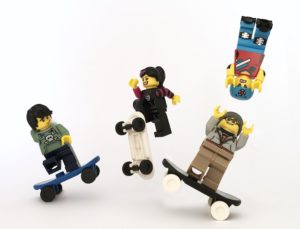 Images showing single figures are taken from Brickset. The group picture is from the private performance.

Why I am Excited for LEGO CMF Series 19