Ever since their introduction in 1978, the LEGO Minifigure has taken a life of its own, and this is exemplified perfectly with the Collectible Minifigure series. Started in 2010, LEGO have released 19 such collections (not counting special edition ones, like The Simpsons or the LEGO Movie). Each are an eclectic mix, making sure almost everyone will have at least one favourite. And today, I thought we’d open the box of the latest assortments LEGO has sent our way and explore in detail the sixteen new characters from the Collectible Minifigure Series 19:

I find this one quite special because of the unique piece designed to represent a game controller, although it’s a shame the package didn’t come with two. The gamer also has a poster of the game he’s playing, which is a nice homage to a previous minifigure, the Cyborg from Series 16.

Fans of LEGO’s in-house sci-fi era will also greatly appreciate his jacket which is peppered with Classic Space, Blacktron and M:Tron logos.

He also comes with two facial expressions, one content, the other frustrated, which is fitting if he’s unable to level up 🙂

Now this one was quite an unexpected surprise. The Shower Guy comes with a cap, a green rubber duck and a blue brush. He has a removable cloth towel which reveals… bubbles and foam to protect his modesty. This might actually be the first time a fully naked minifigure has been created by LEGO, and his two expressions, one happy, the other embarrassed, are perfect.

LEGO have often gone into the realm of fantasy, and this latest addition is amazingly detailed. I love his transparent sword and plume, and his face is pretty spooky.

The Fright Knight comes with dual molded legs with nicely detailed print all the way down the front of them.

He also carries a shield and has a full suit of armour. However, this armour hides impressive prints. Remove it and you’ll be graced with an amazingly detailed chainmail which will please any fan of medieval adventures. 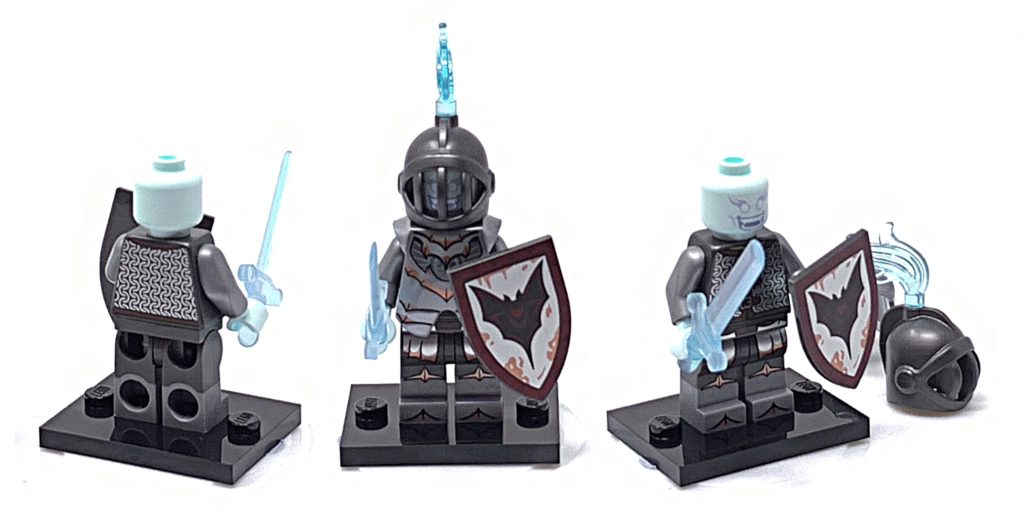 Chinese mythology is rich and varied and I believe this is the first time LEGO have reproduced one of these characters in minifigure form. And which better one to start than the Monkey King himself!

He comes with a highly detailed costume, composed of dual molded legs and arms and a cape that splits conveniently to allow room for his tail.

His headgear is great, with his big monkey ears part of the wig. The red plume sticking out of it was first seen in the Overwatch series.

His staff is made up of two lightsaber hilts and a transparent red bar.

He comes with two expressions, one manickingly happy, the other, displeased yet determined. 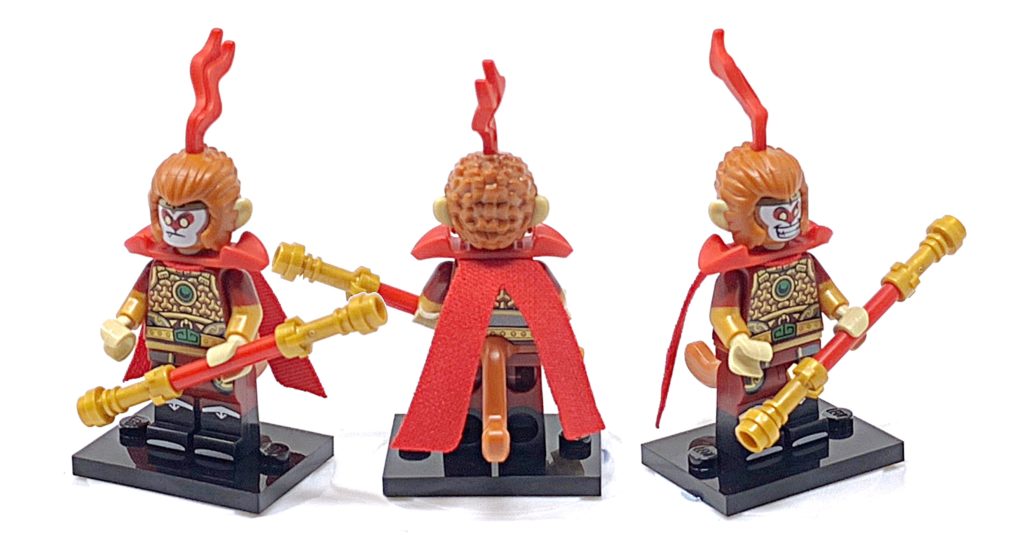 This Programmer is a bit of a geek. She’s into robotics and comes with her own tiny robot, which is a clever use of one of the new gun parts created for the Overwatch series.

She has a red jumper tied around her waist, but the effect doesn’t quite work as far as I’m concerned.

She comes with two subtly similar facial expressions and an amazing hair piece.

This minifigure has great printing all around. The arms and legs are nicely detailed and is just the kind of mummy you’d expect to find buried deep inside a tomb, along with her golden scorpion, undoubtedly one of her many treasures. Her face is a mask, but remove it, and you’ll find that this Mummy Queen is still very much alive, and she’s coming for you!

She would be a nice addition to any fantasy adventure.

And if you have a zombie mummy, then you must also have a Jungle Explorer. Now if you’re familiar with Johny Thunder, the main protagonist of the non defunct LEGO Adventurers theme, you’ll immediately recognise the similarities between him and this new character. Guess it must be the moustache.

Obviously LEGO’s modern printing techniques make this Explorer a much higher quality version. His torso is precisely detailed with a scarf, a shirt with two pockets, a belt and a rope. He’s got a backpack – this is not a new piece but it comes here in new colours, and a magnifying glass.

But perhaps the most interesting part of this minifigure is his little green companion: this chameleon is incredibly detailed and extremely well done, and if you like LEGO animals it’ll be hard to give this one a miss.

Now fire fighters are pretty much two a penny in any LEGO City, as LEGO has produced countless sets with them. But if you don’t happen to have a fire fighter in your collection, this is a great one to get. My favourite part is her hat, since it’s molded into her hair. We’re seeing more and more pieces like this which are much more satisfying than the Explorer’s hat for instance, which make it look like he has no hair at all.

She comes with two facial expressions, including one where she’s yelling, which complements her loudspeaker piece really well.

This Dog Sitter comes with two dogs! That’s pretty impressive on its own, and to make it even more exciting, this is the first time a dachshund has been created in LEGO form.

She has a green spade, and a cap, which I believe is the same piece created for the Corner Garage earlier this year, only in a different colour.

But let’s not beat about the bush – the most important piece here is poop. Yes, LEGO have finally created a poop piece, and to celebrate, the Dog Sitter comes with two of them.

Of course you might try to argue that this could also be a muffin or a scoop of chocolate ice cream, but considering her job description, there’s little doubt what those pieces represent…

In the last minifigure series, we had a Watermelon Guy. LEGO simply repurposed that piece and gave us what we’ve all been asking for: a Pizza Guy. His costume is only printed on one side – makes sense really, since the other side is the crust. And he comes with a menu offering extremely cheap food, especially by LEGO’s standards where most things usually cost about $100.

Here’s got highly detailed and very well printed trousers, but his torso has nothing on it, and he only comes with a single expression.

OK, I may be biased since I’m a sci-fi nerd, but this Galactic Bounty Hunter looks amazing. The print on his torso and legs is beautifully detailed, his shoulder pads give him an imposing Judge Dredd look, and his helmet is spectacular.

Move aside Mandalorian, if this Bounty Hunter is after you, you’re in trouble.

He comes with a transparent red piece showing the identity of his next target – which in great LEGO fashion could really be anyone.
Remove the helmet and not only does he clearly enjoy his work, he may well also be a cyborg of some kind.

The Gardener’s costume is very eclectic and makes me wonder if Matthew Ashton or Justin Ramsden might have had a hand in its creation. She’s got an interesting hairdo but only one facial expression which was disappointing. But perhaps the most interesting part of this figure is her pink flamingo. Now I gather it’s supposed to be a garden ornament, but there’s nothing stopping anyone from pretending this is a real flamingo.

Perhaps the best bit of this minifigure is its second expression where he’s completely beat up yet really happy about it! I guess that’s the kind of determination you need to like rugby!

Of note as well is the rugby ball which is a first in LEGO form.

The minifigure series are quite famous for often having animal costumed characters. But we didn’t have a fox – until now. It’s a pretty simple design, especially compared with most of the other characters in this series, with very minimal printing. It sort of harks back to the earlier days of Collectible Minifigures when the printing technology wasn’t as detailed as it is now.

Nevertheless, a fox costume is a great addition. The head mask is instantly recognisable and I love the tail piece.

She also comes with two facial expressions, a bag and a chicken, because even costumed foxes love chicken it seems.

Now this one is really odd looking as far as I’m concerned. It’s based on the similar mold as the Panda Guy from the LEGO Movie, but oh my, this guy has had fun dyeing various parts in different colours, arriving at a miss mash creation which is either really cute or truly terrifying – depending on how much you’ve had to drink or what kind of drugs you’ve been taking.

He has two facial expressions but they’re both a bit pointless since you can’t see either of them when his bear head is on.

I’m sure the rainbow piece will prove popular, and it comes with two heart pieces.

The Mountain Biker is actually pretty excellent, not least of which because she comes with an actual off-road bike. That’s a big accessory to include. Her outfit is great, featuring double molded arms and legs, knee pads and even a plaster on one of her elbows.

She has two facial expressions, one with sunglasses and the other without and a great safety helmet with attached long brown hair. The more LEGO do these custom hat and hair pieces, the happier I’ll be.

So there you have it. 16 new minifigures from adventurers, zombie mummies, dirt bikers and retired gardeners. There’s bound to be something there for everyone. Which is your favourite?

As with everything, different people have different opinions on the same subject matter. You can read Pinar’s thoughts about the new Collectible Minifigure Series 19 here and Phil’s here. Also, Filip has an article solely based on the “Jungle Explorer”, a.k.a. Johnny Thunder. Don’t forget to check them out!