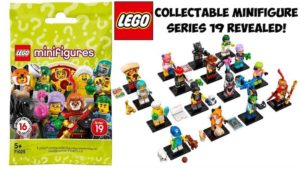 The LEGO Collectible Minifigures Series 19 was revealed a week or so ago. As soon as I saw the figures, I was very excited. With every series release, I have seen several minifigures that I would like to own, but for the first time in several series there are a few must have minifigures in Series 19 that I will make room for in my toy budget. 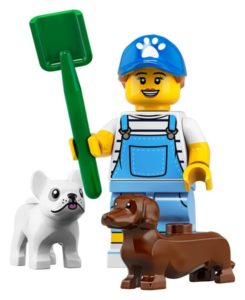 This figure delights me because I am a very big dog lover. I have one of every LEGO dog released, and with this figure we get a new one! Family friends when I was growing up owned a few dachshunds and they were the most adorable little dogs. Plus, we finally get LEGO poop! Look, I am a LEGO photographer, and key to me are faces and accessories that I can use to tell the story I am looking to tell. This figure has that story telling ability in spades, and even includes a spade! 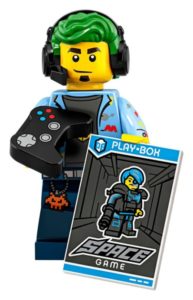 I love video games, and at one time sported green hair. Granted, it was for one St. Patrick’s Day celebration and washed out soon after, but it was green! Anyway, I feel like this guy represents a very particular point in my life, and one that I enjoyed thoroughly. The fact that LEGO collectors will be receiving an actual LEGO game controller instead of a printed tile, and even a faux video game box is awesome. There are also Easter Eggs for the long time gamer, such as the Space Invaders keychain (?) hanging off the gamer’s belt. Nice! 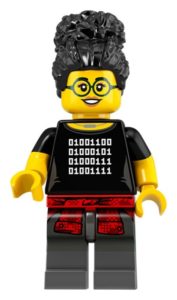 As a gamer and a computer nerd, I love Coder Girl. She represents the best parts of computer culture, and as has been decoded elsewhere, the binary on her shirt spells out “LEGO”. How cool is that? I also love the hair piece and the sweater tied around her waist. The attention to detail on LEGO’s more recent collectable series has been excellent. 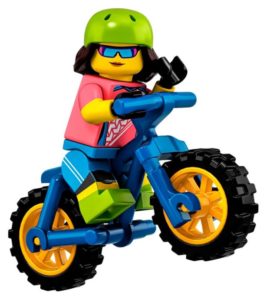 Ok, with this figure I am most excited about the mountain bike. I am not sure, but I think this is the first non-street bicycle that LEGO has produced. It has been previously available in larger sets, but this is a great way to get ahold of this bicycle without much expense. For those that feel the blind bags for figures, this should be an easy-to-find part. Let’s get biking! 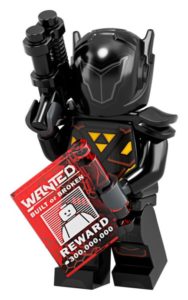 I’ll mention that the names of these minifigures have not been confirmed as of writing, but given the awesome accessory this minifigure is holding, this name seems appropriate. I think that is a variant of an Ant-Man helmet, recolored, and the printing on this figure is fantastic. Again, his accessory beckons to me most. That “built or broken” gets me every time, as does the trans red of the piece itself. Awesome! 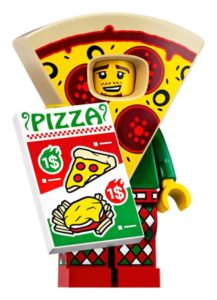 I love pizza. Like, a lot. I won’t argue about whether or not pineapple belongs on a pizza, because it has no place on my pizza. (Hey, whatever you want on your pizza is fine by me.) I have waited through watermelon, banana, hot dog, and even corn, but finally, finally! there is a Pizza Dude!! I can’t wait to use this minifigure in some pictures. I even wish I had a giant pizza suit. (Almost? Not really.) But seriously, nothing that comes in Series 20 or after will top Pizza Dude for me in the food wearing category. 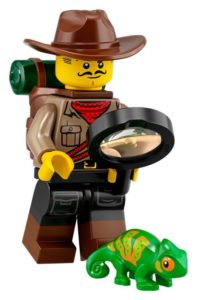 Ok. Here is the piece de resistance for me. Explorer Guy is my number one for Series 19. I grew up with LEGO in the 90s and one theme we had was the Explorers led by Johnny Thunder. This was a classic 1930’s era adventurer like Indiana Jones or Rick O’Connell from the Mummy franchise. Johnny Thunder traveled the world and excavated or had adventures in Asia, Egypt, the jungle, and even on Dino Island! He was (and still is) so exciting. 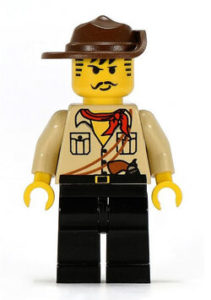 I grew up watching Indiana Jones. He was the epitome of cool, with a whip and leather jacket and a fedora. I love the character so much that I actually bought my own authentic Indy whip, a fedora, and had a leather jacket made just like his. Ok, fanboy much? I may be older, but I still want to be Dr. Jones when I grow up.

My mother was horrified, but my dad showed me the Mummy starring Brendan Fraser when I was only 12 and I have loved that and the Mummy Returns ever since. Again, he is another adventurer exploring exotic locales and fighting creatures and other treasure hunters.

Johnny Thunder was all of that, but in LEGO form. He was my fascination for Egypt and exploring and being adventurous. When I saw the latest LEGO collectible minifigure, all of that came rushing back. I want to build a hot air balloon and sent this guy on more adventures. I can’t wait till I can. Also, it must be said, but that chameleon is adorable and perfectly colored. The new Johnny Thunder type is great enough, but to get a small lizard sidekick as well is icing on the cake.

Oh, and one last thing: Johnny Thunder had a gun printed on him. I don’t like guns, really. This update to the explorer character doesn’t carry a gun on his person. I can accessorize him with one if I need to, but because he doesn’t wear one I can choose to not have a firearm as part of his everyday carry. And following the many, many tragic shootings in my American home, that is something that is very important to me, personally. Thank you, LEGO.

Looking back over these several minifigures that I am so excited to own, I see that nostalgia plays a huge part of why I want them. My friend Pinar wrote last week about why this Series isn’t as exciting, but that is what I love about LEGO: there is something for everyone.

If previous collectible series were more your jive, or if this one has you, like me, fired up, then awesome! Like pineapple on a pizza – whatever makes your pie perfect. As I like to say, whatever you build with LEGO, and whichever minifigures you incorporate, I look forward to what we can build together!