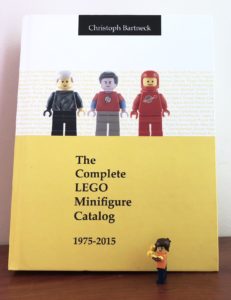 Ever since I’ve started writing here, The Complete LEGO Minifigure Catalog has been on my mind to review. I kept postponing it, choosing different subjects, creating new ones… After all, I’ve never reviewed a book before, and I admit, I was a bit scared to try. The other day, I was thinking about what to write, and said to myself “It is time. No more fears. You’ve postponed this long enough!” Fortunately, some of my inner voices get along well, so here I am, with this awesome book in hand, ready to share my thoughts.

Seriously, though, how do you write a book review? If it’s a novel, it’s easy. You talk about the language of the author, how well the story is, so on and so forth. It gets a bit challenging with a catalog.

But before getting to all that, there’s something else I want to mention. You may have seen official LEGO books published by DK, character encyclopedias, visual dictionaries, ideas books, etc. They’re all beautifully designed and incredibly extensive. Combine them all, add a few novels published for younger readers for spicing… and you can maybe get as good as The Complete LEGO Minifigure Catalog by Dr. Christoph Bartneck.

A few years ago, I had this crazy idea of making a list of all my minifigures. You see, I had recently moved back then, and was having trouble finding some among heaps of boxes. I wasn’t aware of the existence of Brickset at the time, so I thought maybe someone created an app for LEGO minifigures.

There were several. However, most of them were about the Collectible Minifigure Series, and that wasn’t what I needed. Then I saw “The Unofficial Minifigure Catalog”. Curious, I downloaded the app, and suddenly I had all the minifigures LEGO released, starting from 1975! The minifigures from 1975-2010 came free with the app, and after that, you paid a small price each year if you wanted to update your database. You were able to purchase non-standard scale figures as well, like the ones from DUPLO, Fabuland and Belville.

Now, since this article is not about the app, I won’t spend too much time talking about it. But I think every AFOL should know of its existence, not to mention have it on their phones.

While I’m not certain when the first book was published, I’m guessing it was somewhere around 2011 (Amazon only lists the second edition, published in 2013). It was, like the app, called The Unofficial LEGO Minifigure Catalog, and had all the standard scale figures between 1975-2010. After that, he published five more books, one for each year, containing the minifigures released on that year. There’s also a separate book cataloging all the non-standard figures.

The book I have, The Complete LEGO Minifigure Catalog, is the last of his catalogs, and it contains all the standard scale minifigures released between 1975-2015. Approximately, that is  over 6,500 minifigures! 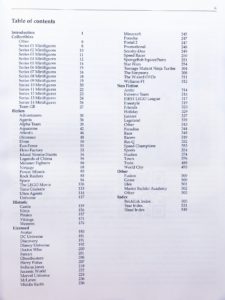 Dr. Bartneck’s classification may be different that what we’re used to seeing in Brickset or Bricklink, but it’s very detailed and explained thoroughly in the introduction. Furthermore, it includes the Bricklink code of each minifigure, so it can easily be found if necessary.

There are 6 minifigure sections in the book: Collectibles, Fiction, Historic, Licensed, Non Fiction and Other. Each of these sections then have sub-sections specific to a theme, like “Power Miners” for Fiction or “Middle Earth” for Licensed. Rather than listing the minifigures by year, Dr. Bartneck chose to list them alphabetically, which makes it easier to find a specific theme in the table of contents in the beginning. Also, with his way, it’s possible to see how certain minifigures evolved throughout the years and compare them side-by-side, so to speak. I mean, we all know how drastically Harry Potter figures changed, right?

It’s big. Seriously. It’s approximately 21×27 cm, and 574 pages. You may have trouble lifting it up with one hand.

Oh, you meant inside of the book? Sorry, my bad.

Let’s see. We have over 6,500 minifigures, each photographed separately, and mostly on a light (usually white) background so the details are easy to see. However, as every sensible person would, Dr. Bartneck photographed some minifigures on a darker background, so their white parts (or accessories) would look better. While the scale of the prints is a bit smaller than 1:1, they are still big enough to show all the details.

There are three indexes, by Bricklink code, by year, and by head. Yes, you read the last one right. There is a head index. With images. So if you have a minifigure, and wondering where else its head was used, you can take a look there and see all the other minifigures that use that head, as well as how to find it in the book and on Bricklink.

The other two are pretty self-explanatory.

The print quality is good. Is it close to the above mentioned DK books? No, it’s not. Which brings us to the next point.

Inside the book, there’s a line saying “[something something] the LEGO Group, which does not sponsor, authorize or endorse this book”. For me, this is very disturbing. Ok, so you have released many minifigures and it may be hard to create a catalog for all of them. But this man went to the trouble of doing that. For fun! So why aren’t you supporting him???

I’m sure they have perfectly good (!) reasons for not doing so, but it doesn’t change the fact that The Complete LEGO Minifigure Catalog, and Dr. Bartneck’s other works, need – no, deserve – the LEGO Group’s full support.

Dr. Bartneck was not aware of this article at the time it was being written. That was done on purpose. Sure, I could have contacted him and asked for some juicy details, but I decided to share my thoughts without any influence. 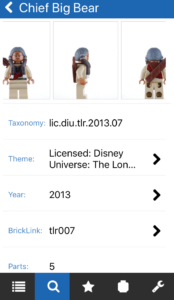 As I was searching for information about the book, I also saw several reviews saying while it is a great book, it has limitations (other than the ones Dr. Bartneck mentions in the book himself). One of these limitations is the headgear making it hard to see the minifigure’s face. While this is true, a simple Bricklink search would provide the necessary information. Besides, if you download the app as well as getting the book, you won’t only see the minifigures without their headgear, but also get high quality images from front and back with and without the headgear, as well as from the side where needed.

You see, people like that make me wonder. When they look for things, do they find everything in the same place? They must have, otherwise they wouldn’t complain about it. Imagine for a minute, searching for something and finding it in the first place you look… wouldn’t that be wonderful?

Personally, I was sad to hear he wasn’t going to continue cataloging minifigures. For me, the app was a gold mine, and the only place I could keep track of all my minifigures. I read on his site that he was not “able to convince enough people to help out with gathering the minifigures”.

But who knows, if enough people reads this article, and contact some awesome collectors we have in our community, the Unofficial Minifigure Catalog project will come to life once again!

Please note: All the images used are actual photographs from The Complete LEGO Minifigure Catalog, and do not reflect the quality of the book as well as they should due to lighting, device used, and so on. Except the logos of the app (obviously) and the last image, which is a screenshot from the app.

Top Minifigures.com Figures You Need to Have This Year

LEGO Hair: Getting the Look Right