We’ve all done it. We’ve all shamefully bought LEGO sets for the figures, parted out anywhere from 200 to 2000 pieces, just for the satisfaction of having those special, unique minifigures, haven’t we? In the age of AFOL, with LEGO catering to our nostalgia and high disposable incomes with more D2C or exclusive sets than any one collector can reasonably afford, we’ve all sacrificed some cash for a set we don’t care for, just to get that Star Wars character or those Harry Potter minifigs. 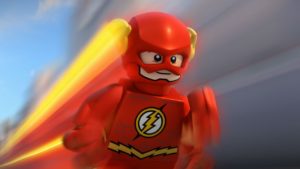 As a child and a teenager, I was either banned from buying more LEGO or, later on, limited to just 2 sets per year, so the idea of doing something as extravagant as shelling out £30 for 76012 The Riddler Chase just to get the Flash was completely alien to me. Surely you couldn’t justify spending that much, essentially just on one minifigure? One tiny, thumb-sized piece of printed plastic? If you were going to buy a LEGO set, it had to be because you really wanted it, otherwise it was a waste of money. Oh how time changes us all.

Oh, but it also has…

As my collection has grown, and my MOC projects have become larger and more detailed, I have become much more willing to buy mid-range or even large sets just for small elements of them. Sometimes it’s just for parts of the build, but just as often, I will justify spending £40 on a set which I’m not interested in by telling myself not only does it have minifigures I want, but I can find uses for the pieces in my own projects.

75236 Duel on Starkiller Base, for instance, has a lot of white plant elements, and some ugly-rock-pieces. Surely they make it worth getting just for Kylo Ren? 75927 Stygimoloch Breakout has a lot of use fences and rails, which helps justify getting the set for that sweet dinosaur element? What about 21312 Women of NASA? Was there a need for me to get that twice, other than for the minifigures? Well, it has that printed Hubble telescope image, and some other great printed tiles…

You can see how this train of thought works. It’s a dangerous slippery slope, and one that I think most collectors have toyed with sledding down with glee at one point or another. At the end of the day, it’s a hobby we enjoy, so why shouldn’t we splash out once in a while? That’s a sentiment that gets harder and harder to agree with the more LEGO introduces larger and larger sets.

In 70840 Welcome to Apocalypseburg! from The LEGO Movie 2‘s range, the dilapidated Statue of Liberty is home to many of the film’s original characters, alongside exclusive versions of Harley Quinn and Green Lantern. As much as I wanted both, I had to draw a line in the sand and say to myself that no, I could not spend £270 just to get two minifigures. Whether anyone else has crossed that line is up for discussion… 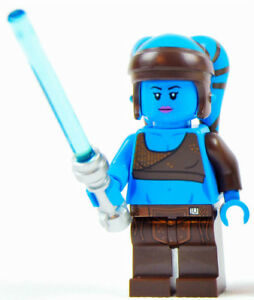 Buying a whole set is not the only way to get the minifigures we want. The advent of eBay and other digital resellers has meant that people can either strip sets and sell the pieces individually online, or sell off the old collections they no longer want. Suddenly, spending £20 on 75182 Republic Fighter Tank just for Aayla Secura becomes spending just £6.55 for the figure alone which, if one is to do this regularly, becomes much less of a strain on the wallet. Continuing with this example, I myself have bought a large number of Republic Jedi – Shaak Ti, Quinlan Vos, etc – without shelling out £300+ on Republic cruisers, Clone Turbo Tanks and Droid Gunships that I would likely build once and then dissolve into my parts collection.

The most I myself have ever spent on a single, second-hand minifigure this way is on Zuckuss, the final bounty hunter from The Empire Strikes Back that LEGO needed to release to complete the collection… who unfortunately came in the £110 75243 Slave I – 20th Anniversary Edition, a set that is woefully out of my price range when it comes to buying things just for the figures. I spent £21.95 for him on eBay. Job done, hit taken, and not as bad a hit as it could have been. But what might be an expensive minifigure for me is just a drop in the ocean for many other collectors. 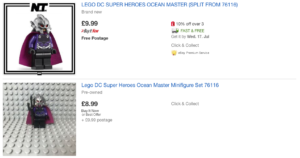 Even a brief search of eBay for minifigures from currently-available sets shows some interesting results. 76116 Batman Sub and the Underwater Clash is the only way to get Ocean Master, the antagonist of the recent Aquaman movie. The set itself is £20, while the eBay listings are £8.99 and £9.99 each – half the set’s price. Surely with this small a gap between minifigure and set price, it’s better to just buy the whole set and swallow the extra £10? Not much of a loss, and like many small sets, it has some useful pieces.

But what about larger sets? Let’s look at 75810 The Upside Down, the recent set based on the hit TV show Stranger Things, a kit that has set the internet – not just LEGO fans – ablaze with excitement. The set itself is £180 and full of incredible details, not least of which are its minifigures of the show’s core cast, including the dark tan, goat-legged, nightmare-Venus-flytrap-headed form of the dread Demogorgon. The show’s antagonist is apparently a creature from another dimension, and while I haven’t seen the show, I recognise the imagery. In a few short years, the monster has become iconic. So how much would the Demogorgon alone set you back on eBay? The cheapest listing I can find is £31.84, plus shipping. At this point, the minifigure is expensive, but still a fraction of the price of the overall set, so what do you do?

Over time, the price of anything will rise and fall based on supply and demand for it. To put this into perspective, after LEGO discontinues a set, its price will rise on the secondhand market: there is now a limited supply of that set, and so resellers will take advantage of this to raise the premium. 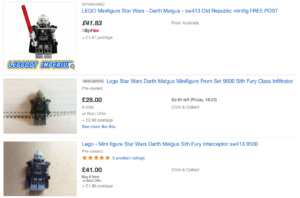 I ran a search for Darth Malgus, the Expanded Universe Sith Lord from the video game Star Wars: The Old Republic, who LEGO introduced as a minifigure in 9500 Sith Fury-Class Interceptor.

LEGO seemed unlikely to make the set, to say the least. The game itself featured violence more graphic than the Star Wars movies, and was for a much more limited audience than the films or TV shows. It was bound to become a collector’s item, and lo and behold, 7 years after its release, a Darth Malgus minifigure will set you back £40 at the very least! This is about half the retail price of the original set in its entirety. Obviously, buying said whole set at retail price is no longer an option (the value of the whole, discontinued set has risen dramatically too) but it is certainly food for thought.

I’m sure to someone who isn’t a collector, this example might make the whole enterprise seem like a fool’s errand, with the AFOL at the mercy of the eBay “scalper”, but is it that simple? While there are always those who will charge too high a price for a product second-hand, we as the consumers are confirming that high value by buying these items.

So is it really such a bad thing to buy a set just for a small part of it? If we can find ways of justifying the price to ourselves, is that enough? Should we be more careful with our money, and expose ourselves to the often-cutthroat world of secondhand sales? I think, like whether we want that Aayla Secura enough to buy the whole tank, that is a question we all have to ask ourselves one minifigure at a time.

Don’t forget to check out this guide if you’re looking for different ways to display your precious minifigures, and this one for a cool way to document them!