Ladies and gentlemen, welcome to the second part of our Space story. Last week, we’ve looked at the more extra terrestrial minifigures, and learned where they come from and what their purpose in life is (in short, they’re here to destroy us). However, there was a revelation as we reached the end of the story, that one of the aliens may, in fact, have been human once. Let’s get right back in, and see what he was like before the virus, shall we? 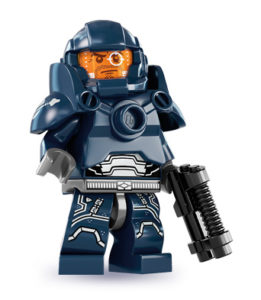 Meet Luiz, or more commonly known as Galaxy Patrol (CMF 7). He is part of a super elite squadron, tasked with patrolling and protecting the galaxy. Their training is hard, you should be able to resist mind-control and hold your breath for 42 quarkoids, along with being tough enough to survive any fight. Even though many turn back home with crushed dreams, if somehow you manage to pass your training, nothing can stop you.

Unless, of course, you enter a spaceship containing a virus capable of turning you into a mindless reaver.

Since we’ve already talked about the legend of these officers, let’s take a look at the origin of that legend. What made people think that the Galaxy Patrol officer turned into the Alien Avenger? 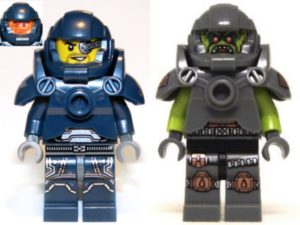 The image is pretty self explanatory, but let’s take a closer look anyway. As can be seen, the Galaxy Patrol officer and the Alien Avenger share not only the same helmet, but also the same armor. If the virus is indeed as powerful as it is said to be, the discoloration of both parts should not come as a surprise. Their legs are somewhat similar as well, having the detailed armor continued on the legs along with the kneepads.

The most striking part, however, is what goes on under the armor. As you can see in the image below, both characters have a very similar torso. Of course the effects of the virus has made the Alien Avenger’s torso a bit rusty and disorganized, but I think it’s safe to say that the Shami was once known as Luiz.

However, I think there’s hope for him yet. Even though he turned, he tried to keep a part of his personality by engraving a name on his shirt, making him different than his brethren. Who knows, maybe he secretly searches for a cure for himself and his fellow officers as he raids and pillages the galaxy! 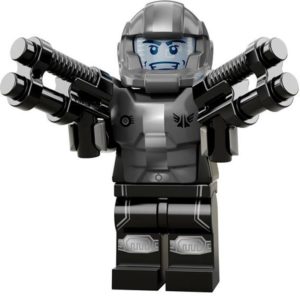 Now, if for some reason you decide not to go back home after being rejected by the Galaxy Patrol, you have two choices: You can join the Galaxy Squad or the Space Police. In fact, we have one from each of these corps, the Galaxy Trooper (CMF 13) and the Intergalactic Girl (CMF 6).

The galaxy troopers are responsible for keeping the peace around the galaxy, and protecting all the different species who go on living their peaceful lives. If, for some reason, a space pirate decides to attack such a planet, they will either leave with their hands empty or end up in jail.

The training of the Galaxy Squad officers are different than the Galaxy Patrol officers’, though just as hard. There are several head officers like Ashlee Starstrider, Billy Starbeam and Max Solarflare. Each get their own squad and train them not only in combat but in history and geography of the planets they’re tasked to protect. That way, they can assist the inhabitants when needed along with protecting them from outsiders.

Intergalactic Police at Her Best 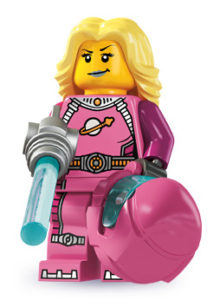 Speaking of Ashlee Starstrider… I bet you didn’t know that the Intergalactic Girl is her daughter. When she first joined the Space Police, her mom was a bit disappointed. After all, her family has been a part of the Galaxy Squad for generations! She was ashamed her daughter chose such an easy path. As time passed, she realized that being a space police was harder than she thought. Even though she has always been supportive of her daughter, now she did it with pride. And when she single-handedly took down the Alien Villainess, she was happy beyond imagination.

As you can see, the uniforms of the Galaxy Trooper and the Intergalactic Girl are very different. Founded by the Classic Spacemen, the Space Police does not like putting everyone in the same suit. They did try it once, but when they realized it made everyone unhappy, they provided a template and let everyone wear what they liked within that template. Policing is hard, you know. You can at least look good while doing it!

The Galaxy Squad share a similar viewpoint, but only for the head officers. Their uniforms are more colorful while the new recruits, like the Galaxy Trooper here, wear darker and more monochromatic uniforms. As they rise through their ranks, their freedom to wear color increases.

Of course being part of a peace corps is not the only profession you can have in space. Licho here, or the Space Miner (CMF 12), is a great example of that. 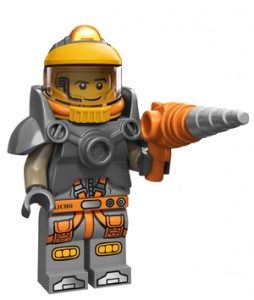 Licho is Luiz’s younger brother. Instead of joining the Galaxy Patrol, he chose to become a miner (poor thing would be crushed if he learned of his brother’s fate). Mining, he says, is just as hard as policing, and just as dangerous. “I’ve been to strange planets and seen rocks come to life, and gone to such planets that you saw ice wherever you looked!”. In other words, he has worked with both Rock Raiders and the explorers of Ice Planet. He told me Docs saved his life more than he can remember when he first started. He doesn’t like talking about his experience on the Ice Planet, apparently he had a crush on one of the girls, and his brother and grandfather weren’t too happy about that…

Licho says having a uniform with bright colors is important for a miner. You never know when there’ll be a landslide, and before you know it, you’re buried under rubble. Now, if your uniform is the same color as that rubble, others will walk past you without even noticing! The first thing they learn in space mining is “Always make sure others can see you”.

His helmet and hand drill are orange, and his uniform has accents of orange all over it. Apparently, when you change the color of the armor, it becomes more brittle, so it stays gray. Like every miner, he has a headset which should be online at all times. Well, except when you’re in the  bathroom.

Explorers of the Galaxy

And then there are those who are just in it to see new worlds. 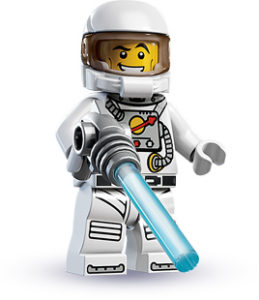 The Spaceman (CMF 1) may have a fancy outfit and a cool laser gun, but he is not the brightest bulb in the shed. He has been to space, no doubt about that, but it was years ago. Going on missions, coming back, going again, and back… somewhere along the way, something happened to his mind. Now he thinks that he’s always in space, when in fact is always on earth. His neighbors got used to his antics, but when an outsider sees him trying to leap in slow motion because of “the planet’s gravity”… let’s just say not many outsiders come to the neighborhood these days.

He is, however, a straight descendent of one of the first spacemen. His grandmother, Jenny, was one of the first women who was brave enough to travel to space. Ah, the stories she told her grandson… They were so inspiring that he decided to follow her footsteps. He is proud to show the symbol of her squad on his spacesuit.

The Astronaut (CMF 15), is still new at this. He has dreamed of going to space all his life, and read everything he could find about the big unknown. He showed so much interest that the executives of the space program decided to give him a chance. After successfully completing his training, he’s ready to go on his first mission. He even made a flag to plant on the surface of the planet! If he encounters any  extra terrestrials, he’ll tell them he comes in piece! And who knows, maybe one of them will tell him that astronauts look better when they shave.

His interest and enthusiasm of space inspired his son, too. The Rocket Boy (CMF 17) dreams of space when he sleeps and when he’s awake. He has made a rocket ship costume all out of cardboard, and even a flag, just like his dad’s. He knows the story of every spacemen and astronaut by heart, and when he grows up, he will be just like them!

Meanwhile in an alternate universe, a hero rises! When compared to the one we live in, it feels like he’s a bit… old. He, on the other hand, prefers to be called old-school. Yes, you guessed right, I’m talking about the Retro Space Hero (CMF 17).

If we were to convert his present, we would get our past. Approximately 1950s, 1960s. Who would have thought there was a universe where the sci-fi movies were real, right? So when this guy came to our universe, many showed great interest in him. His helmet, his uniform, his cape, his ray gun… he blew everyone’s mind (not literally, thank goodness). He, on the other hand, didn’t get what all the fuss was about – until he learned the meaning of “retro” and “old-school”. You see, in his universe, there are many like him. But here… here he is  unique.

There are those who approach him with skepticism, though. They even go as far as to say that he’s not from another universe, but from our own, with a little too much enthusiasm of retro sci-fi movies. The asteroid samples in his spaceship look very much like paper, if you ask them!

We simply ignore those people. There will always be non-believers.

“One small plate for a Minifigure, one giant brick for minifigure-kind!”

It seems once again we have reached the end of our space journey. Stay tuned, for next week we will take a look at the more mechanical minifigures that tend to appear in space. Let me know which of the above mentioned minifigures is your favorite in the comments, and what stories you have for them. 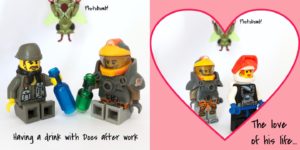 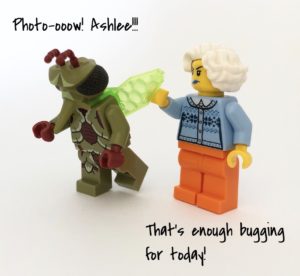 Images showing single figures and parts are taken from www.brickset.com and www.bricklink.com. Group pictures belong to the author.

How to Display Minifigures: A Beginner’s Guide