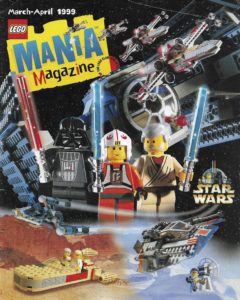 Up until 1999, LEGO minifigures came to life through the various LEGO themes. Some had names and backstories, others were generic fireman, policewomen, race car drivers, etc. All of that changed in the summer of 1999 as LEGO released its first ever licensed theme: Star Wars. Amazing new Star Wars figures resembled their film counterparts. The first ever molded minifigure head was created for Jar Jar Binks, everyone’s favorite Gungan.

As a 12 year old, I received the LEGO Mania Magazine. Every two months, I received a new magazine and poured over the sets and dived into the articles. I dreamed of being featured in the center pages which showed other kids and their creations.

To my surprise, the April/May 1999 issue of LEGO Mania debuted the Star Wars theme. It was so cool!! In those pages I discovered LEGO minifigure Luke Skywalker, Obi-Wan Kenobi, and Darth Vader! My dream of having actual Star Wars LEGO, instead of my own creations, was real! The fascination those pages held for me was endless. A few favorites were the first ever LEGO landspeeder, X-wing, and TIE fighter.

I remember my first Star Wars figures and set.

LEGO announced, in the second Star Wars issue of Mania Magazine, Episode 1: the Phantom Menace sets. There, in those pages, I saw the 7121 Naboo Swamp which featured Qui-Gon Jinn and Jar Jar Binks. Swamps and jungles, even as a child, fascinated me. Here was not only a swamp set, but a Star Wars swamp set! Having yet to see the newest Star Wars film, I  nevertheless loved the vines and plants that covered this tiny set. 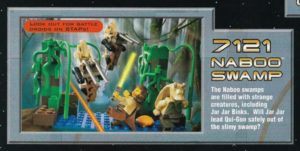 I don’t remember when I received that set, it must have been Christmas that year, but I do remember Qui-Gon’s distinctive hairpiece, Jar Jar’s head, and my first LEGO lightsaber! I still have my yellow-headed Qui-Gon Jinn and Jar Jar Binks somewhere in my LEGO minifigure collection. (Honestly, 1999 was a long time ago…in a home far, far away!). Jar Jar’s chest printing has faded because I played with those two figures so much. It is harder to do that to a LEGO minifigure than you might imagine, so I must have played with that little Gungan a lot. 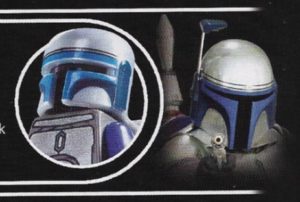 Several years later, in 2003, after another LEGO Magazine showcased Episode 2: Attack of the Clones, I bought my second ever Star Wars set. This time it was much, much larger. I had sold my computer and worked all summer washing RV’s at a local RV park to make money.  After saving, I bought a new Apple laptop, and with the little bit left over, wanted to buy a LEGO set. I walked into my local toy store, and found the $80 7153 Attack of the Clones’ version of the Fett family Slave I. My mom questioned the wisdom of her 16 year old son spending that much money on LEGO, but I was determined. Picking up the large box, I walked it to the register, and left the store with the largest set I had ever owned to date.

Inside that set were the next two official LEGO Star Wars figures that I owned: Jango Fett and his son/clone Boba Fett. I loved Jango’s blue coloring and Mandalorian armor. His helmet was awesome, as was his ship. As nice as his armor was, it is a far cry from the sophisticated printing and armor that Boba Fett has today. I think the only updated Jango LEGO minifigure that exists, and I could be wrong, is the Santa Jango that came out in a holiday calendar a few years ago. Despite how lousy half of Attack of the Clones is, I would love an updated Jango Fett with a new Clones’ version of Slave I. 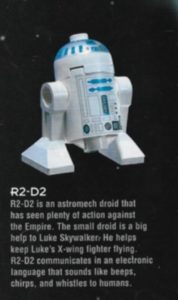 Included in the first wave of LEGO minifigures from the Star Wars theme was everyone’s favorite astromech droid, R2-D2. After perusing the pages of my old LEGO Mania Magazines (to this day I still have the Star Wars issues!) I was surprised to see Artoo.

Admittedly, I am frustrated by the astromech mold. It is a full four studs wide, and a little too tall for LEGO minifigure proportions. I would much rather a slightly shorter droid that was only perhaps three studs wide. Usual LEGO minifigures are two studs wide, making Artoo twice as wide. Understanding that Artoo’s barrel shape makes him hard to render in LEGO, I give the designers credit for getting him to look as good as he does. But given the advances LEGO has made with molding, I am, as I said, surprised that R2 hasn’t been remolded to better suit the rest of the LEGO Star Wars figures.

Artoo Detoo is perhaps one of the most common LEGO Star Wars figures, along with C-3P0. I think he needs an update. LEGO updated the Fett family minifigures, added dark and light flesh colored heads, created numerous head molds following Jar Jar Binks. This year LEGO minifigure fans even got new stormtrooper helmet molds. Where is the new R2-D2? Perhaps he is waiting in the wings for a whole new refresh. We shall see.

An army of Star Wars figures! 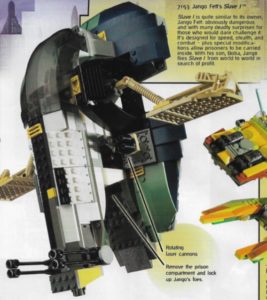 Today, I have over 200 Star Wars figures. My collection includes over 15 R2-D2s alone, and numerous troopers of the Empire and Rebellion. I even have a large molded Jabba the Hutt, and at least three Darth Vaders. My inner 12 year old who read and re-read LEGO Mania Magazines always jumps up and down at his elder self’s LEGO minifigure collection.

The most fun part about growing up is being able to fulfill your childhood dreams. What you don’t realize as a child, at least I didn’t, was that dreams take time. Life seems long when you are 12, and so many things are so far away: driving, love, and all the LEGO you could want. Today, I have a large collection of LEGO and LEGO minifigures. Then, I did not, and I wanted it so bad. But I am happy that patience and hard work has paid off in the collection I maintain and always seek to add to.

If I could tell 12 year old me something, it would be that waiting is not an evil, and that good things do come. That is so true for many aspects of life outside of LEGO as well. I have found love, and I enjoy driving, even, when I get the opportunity to a take a road trip. I envy many things of my 12 year old life now as a 32 year old: lack of real responsibilities, lack of so much stress. But then, I was pretty naive and needing so much wisdom when I was 12. Twenty years adds so much perspective. There was joy as a youngster with a brand new Jar Jar Binks and Jango Fett. There is much more joy today with my army of LEGO minifigures.

Whether you have 1 or 100 LEGO minifigures, cherish what you have, and never stop dreaming. It is dreams that take us through life, and seeing dreams fulfilled is truly one of life’s greatest treasures.

Do you remember your first Star Wars minifigure? Let me know in the comments. And whatever your dreams, I wish them to come true as many of mine have! Whatever you look to build, I look forward to what we can build together.