As with reality, LEGO minifigures of famous characters can often be disappointing. For every hyper-accurate 2014 Taskmaster, we get a dark, uninspiring 2020 Taskmaster (why is LEGO so unwilling to provide leg printing across the board in the Super Heroes range?). Never is this more true than with “bigfigs”, the giant-size minifigures meant to represent larger characters like LEGO Hulk, Killer Croc, and even some characters from Ninjago and Legends of Chima. To be brutally honest, these characters are very hit and miss – some excellent, and others pretty poor – but it has allowed LEGO to semi-accurately portray the body types of large brutes.

Thank the maker they got this sorted out before Avengers: Infinity War! 2018 saw one of Marvel’s biggest baddies make his way to the fore. After a decade of setup, cameos, references and minor appearances, Thanos, the Mad Titan, was ready to wreck the Marvel universe. Obviously, the Mad Titan made his way into LEGO’s sets based on the film, but this wasn’t the first or indeed the only time LEGO created a Thanos minifigure. Where did we get him first? Which is the best design? And did LEGO show him the same TLC when designing him that’s missing from so many bland Super Heroes minifigures?

Welcome, readers, to Thanosology 101. Class is in session.

It’s hard to think of the MCU’s big bad as having humble beginnings, but when he first appeared in Iron Man #55 in 1973, he was little more than your average villain. Sure, he was a powerful Eternal (a race of enhanced, immortal humans) and had that imposing purple sneer, but he was a one-off foil for Tony Stark who hired some bumbling goons to do his dirty work, and himself wasn’t more than a few inches taller than any of Spidey’s foes. Not the stuff of nightmares, clearly, but there was potential. Still, it’s worth noting that OG Thanos was human – and indeed, potentially, minifigure – sized.

The son of A’Lars, leader and chief scientist of a colony of Eternals hiding on one of Jupiter’s moons (can you guess which one?) Thanos carried a destructive streak thanks to Deviant mutations in his genes. Essentially, where the Eternals were the perfect paragons of humanity, the Deviants were the opposite, hunched and deformed, and Thanos was ultimately rejected by the Eternals for carrying some of the traits of this darker strain of humanity. It led him to a more violent way of life, so that by the time Iron Man encounters him, Thanos is known across the galaxy as a terrible warlord. The Mad Titan. 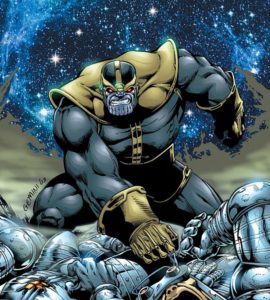 As the decades pass, we learn more and more about him. He worships Death (in the Marvel universe, big concepts have physical manifestations, and Death is a pale, beautiful woman in a dark cloak) and seeks to be her equal, seeking out powerful artefacts like the Cosmic Cube, Infinity Gems and Heart of the Universe to elevate himself to her level. He also locked horns with just about every super-team of do-gooders out there: the Avengers, Defenders, Guardians of the Galaxy, even Spider-Man and his amazing friends. By this time, he had been drawn to be more and more imposing, towering over your average superhero, with a menacing demeanour and homicidal nature to boot. From his scrawnier, dime-a-dozen-villain origins, Thanos had finally evolved into the monster we know from Avengers: Infinity War.

So how have LEGO adapted this monstrosity of a warlord into a minifigure?

Thanos made his first plasticised appearance in 2016’s 76049 Avenjet Space Mission, facing down Captain America, Iron Man and Captain Marvel in the depths of space. It’s based on something halfway between the comics and the 2013 cartoon Avengers Assemble as opposed to the MCU’s incarnation. This semi-comic accurate version may be one of the best, even if its printing is fairly simplistic. The bulk of the brute is dark blue, broken by pearl gold shoulder armour, gold gloves and boots, and a sort of belt/zipper pattern on his torso, also gold. He has a thing for gold, doesn’t he? One thing to note here is that the hands, like all bigfig hands, come off, and this will be important in a future version of the character… 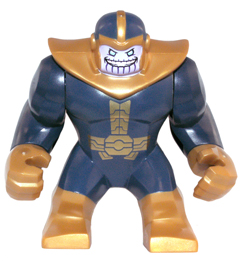 His face is lavender, and once again the printing is simplistic, depicting his furrowed chin, a menacing sneer, and solid cyan eyes. Despite the simplicity, it’s such a close and accurate representation of the character, and I think just goes to show how it’s not always necessary to overcomplicate a design in order to make it work. This one works because it elegantly, softly captures the details of this iconic character. No surfaces are filled with printing for the sake of it, though later versions didn’t follow the same ethos.

All said, this is probably my favourite of LEGO’s iterations of Thanos, a comic-accurate titan that excellently captures the spirit of the character. I give 76049’s LEGO Thanos 5 out of 6 Infinity Gems. LEGO are off to a strong start! 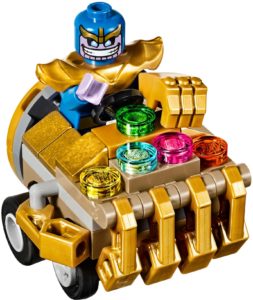 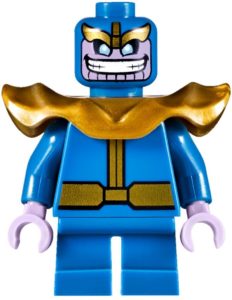 … a start that is almost immediately squandered. Mighty Micros were supposedly LEGO’s way of translating the Star Wars Microfighters into the Super Heroes theme, but they made the unfortunate design to have the minifigures all be caricatures. Short legs, simple torso designs, and exaggerated face printing. The only character this approach has really worked for is the zombie-like, uneven Bizarro from DC Super Heroes, so I’m sure you can guess that the Thanos is…not good.

Arriving in set 76072 Mighty Micros: Iron Man vs. Thanos in 2017, this short, stubby Thanos is ridiculous. Short blue legs, a blue torso with very simple gold printing that somehow still seems to dominate the surface area (making it impractical custom minifigures that aren’t intended to be cartoonish), and a face that is, well, pretty poor. The grin is gargantuan, stretching across 90% of the printed area like a pale banana, and the golden crest of his helmet looks more like angry eyebrows. Sure, it’s a menacing grin, but it’s on a lavender-skinned chibi that any normal-sized minifigure could kick away with ease.

One thing that elevates him from a 1 to a 2 is that the gold gauntlet and gold shoulder armour elements are actually quite useful, and their introduction has I’m sure made many Ninjago fans very happy. Likewise, the gold gauntlet is perfect for giving an Infinity Gauntlet to a regular-sized minifigure. Credit where credit is due, the minifigure is not entirely a wasted opportunity, and so I give 76072’s LEGO Thanos 2 out of 6 Infinity Gems.

Does this put a smile on my face?

2018 brought us to the first part of the MCU’s explosive, climactic crossover, and with it a full wave of sets based on Avengers: Infinity War. Thanos came in the second-to-largest of the six sets, in what is, in my opinion, one of the best spaceships LEGO has made to date: 76107 Thanos: Ultimate Battle. The set has the Guardians’ ship the Benatar, Iron Man, Star-Lord, Gamora, and of course Thanos. Oh, and the Infinity Gauntlet at long last. We can’t forget that! 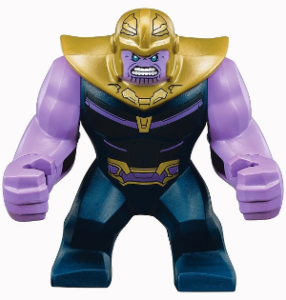 Yes, before we talk about the bigfig himself, it’s important to look at the gauntlet he’s spent decades of the comics and films coveting. This is technically the first time LEGO have made a complete Infinity Gauntlet, and it’s worth the wait for many reasons. The first is that it does indeed features six removable Infinity Stones (collect all six sets to collect them all), and the second reason is that it’s designed to be interchangeable with a bigfig hand. Finally, Thanos can be complete!

This version of LEGO Thanos himself is a bigfig once again (phew) and mostly movie-accurate. After acquiring the Space and Power Stones, Thanos sheds much of his armour, going bald-headed and bare-armed for most of the film. The bigfig almost represents that; he has lilac arms with no printing, but the torso and head are a reuse of the 76049 Thanos, so the helmet has to stay on. However, the simple lines printed on it lend it just enough detail to be aesthetically-pleasing, and make this look like a more relaxed and confident Thanos without sacrificing too much of the movie’s look. This is still very close, and between that, the torso printing depicting the fabric of his shirt and metal belt, and his more determined expression, this is still a great LEGO Thanos. Not as good as 76049’s regal conqueror, but a good visual nonetheless. 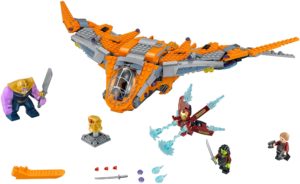 Cut ahead a year to Avengers: Infinity War’s sequel, Avengers: Endgame, and we find ourselves in a bit of a pickle. You see, the marketing around Endgame was so secretive that even LEGO seemingly couldn’t accurately represent the film in the sets. One set is a Hulkbuster-version of War Machine, another is a Captain America motorbike-thing that definitely wasn’t in the movie. Really, 76131 Avengers Compound Battle is the closest to the final film, yet somehow still disappointing. 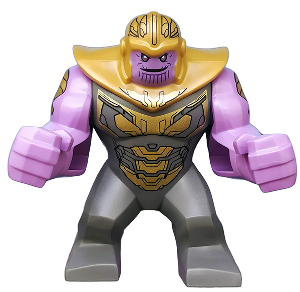 LEGO Thanos is back in Conquerer Mode, but the bigfig is a significant step down from both 76049’s and 76107’s, feeling in particular like a poorer edition of the latter. His arms are still lilac, but this time there are bulbous, misshapen ovals of arm-plating printed on, that look more like awkward golden tattoos than armour. Why not just making his arms the same colour as his torso, which is dark grey, and then put the printing over that? It seems an odd decision. His cruel grin and angered expressions are replaced by a subtle sneer that seems oddly misshapen, like it doesn’t fully fill the area it should do. And why is his armour gray at all, when even the previous bigfig establishes it as dark blue? He looks closer to his minion Cull Obsidian that a previous self.

Luckily, it wasn’t our final LEGO Thanos, as 2020 brought a very strange set to our shelves. Thankfully the Mighty Micros are gone, and in their place are three mech suits: Spider-Man, Iron Man, and Thanos. I couldn’t resist picking this one up, it’s such a strange idea to me to take a character who’s already huge and bulky, shrink them down, then bulk them up with a mech again. 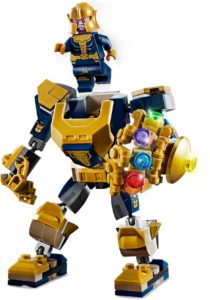 Because yes, for the first time, 76141 Thanos Mech gives us the Mad Titan as a regular minifigure, and oh boy is he a treat. Remember earlier when I said LEGO was often neglectful of Super Heroes minifigures? That many were poorly designed, or lacked leg printing? 76141 Thanos is absolutely an exception to that rule. His torso bears the same design as his first and second LEGO incarnations but here it is slightly more detailed and refined, with jagged, alien muscle definition. The detail extends downwards across his legs, with golden kneepads and other greebling. We finally get his helmet piece, first seen in Knight Kingdom II, in gold, which I’m sure will make many Castle fans happy. And the face… the face is perfect. It’s a shame that the helmet covers the definition of his cheeks; I’d say that might be this minifigure’s only failing of note. His eyes are red this time but it adds to his imposing air, and his bumpy chin is detailed in a darker shade of lavender without being distracting. 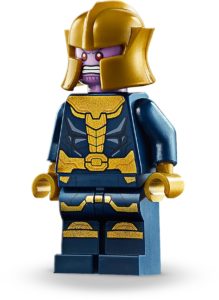 There are plenty of other key Marvel villains that desperately need minifigures – Kang the Conqueror, Galactus, Abomination and Malekith the Accursed (comic version) to name but a handful – so maybe LEGO can let Thanos rest for a while. It’s not like we, the fans, have a shortage of good (or bad) ones. And yes, the bad are quite bad indeed, but at least they aren’t all we have. 3 out of 5 exemplary Thanoses (or Thanosi, if you go by the comics) is more than many LEGO minifigs of film characters get. Would I love to see them perfect Thanos even further in future? Definitely, but for now I think we have 3 examples of Thanosi that definitely break the Super Heroes mold. 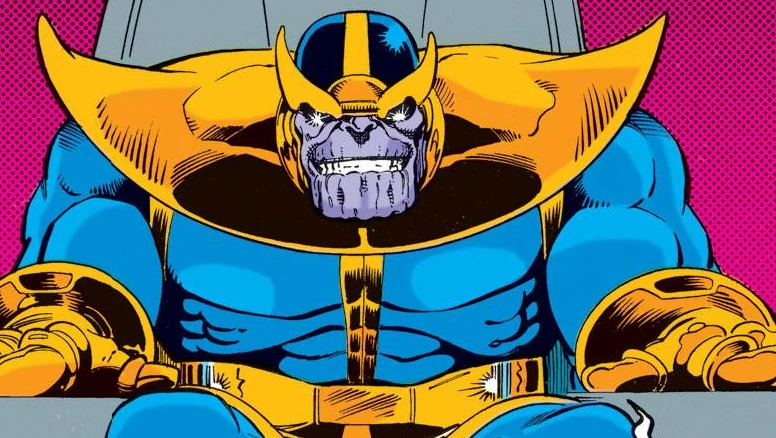