What’s the first thing that comes to your mind when you hear the word “Steampunk”? For me, it’s the gears and the cool metallic colors. The detailing of those gadgets, the wonderful aesthetic of the designs always fascinated me. When you say Steampunk LEGO, though, I can think of a few minifigures and accessories that fit the bill, one of them being the most recent custom LEGO minifigure by FireStar Toys: Steampunk Time Traveller.

But before we get into that, let’s take a closer look at Steampunk, and how I came across my first LEGO Steampunk figure.

Wikipedia describes Steampunk as “a sub-genre of science fiction or science fantasy that incorporates technology and aesthetic designs inspired by 19th-century industrial steam-powered machinery”. So basically, you take any object or clothing, add a few goggles, gears and clocks where appropriate, change its material to bronze, copper or steel with a little bit of leather, and you get a Steampunk version of it. Sounds easy when you say it like that, but I’m very well aware that this is not the case. Designing something is hard work, especially when there are so many details to think about.

A few years ago, I came across this graphic novel called Mouse Guard by David Petersen, and shortly after a minifigure version of it. It was made by Crazybricks. Since I really liked the comics, I decided to get a Mouse Guard minifigure for my collection.

As I was browsing the page, something caught my eye. It was a custom mould head, but there was something different about it. I clicked on the link, and suddenly I was face to face with a Mechtorian. Only the head was a custom mould, the rest were made out of official LEGO parts. At first I thought it was Crazybricks’ design, but later I learned that the original design of the Mechtorians belonged to Bruce Whistlecraft a.k.a. Doktor A. He’s a U.K. based designer concentrating on Steampunk style toys, his most known designs being the Mechtorians of Retropolis. Crazybricks have taken his designs and created LEGO versions of them.

Seeing how various pieces can be brought together to create a Steampunk figure, I went parts shopping on my favorite online store. That’s when I found out about the incredibly detailed custom parts made by Brick Warriors. There were only a handful of them, but they were more than enough to create a fully equipped LEGO Steampunk minifigure. I ordered some parts, and before I knew it, my sigfig was ready to be the star of a Steampunk themed picture!

As time passed, I came across other minifigures that fell into that category, the latest being the citizens of Apocalypseburg. Okay, maybe they weren’t 100% Steampunk, but some of the designs were very close.

And then a few days ago, FireStar Toys released their newest custom minifigure: Steampunk Time Traveller. I already knew the parts from my ventures into the Steampunk section, but you know how the saying goes, “the whole is more than the sum of its parts”. It was truly an awesome figure to have. No wonder it was sold out soon after it was released! 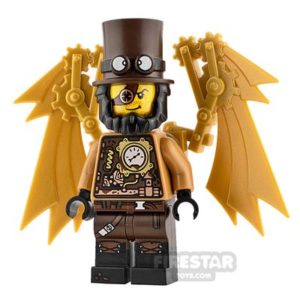 These two look perfect for some not-so-legal inventing and experiments. In fact, I can already cook up a story or two about their origins. Imagine, the Steampunk Inventor lost his legs at a terrible explosion, which we know from almost every movie with an inventor in it is quite possible, but being a genius, he replaced them with mechanical ones after several months of concentrated work. The Steampunk Doctor is his daughter. Inspired by his father’s inventions, and worried something bad might happen to him – like losing his legs! – she became a doctor to assist him as much as she can.

Isn’t LEGO all about writing our own stories after all? 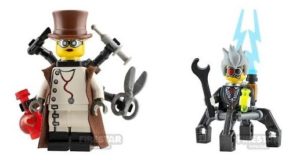 I’m a huge fan of Batman, so I have a special interest in his minifigures. These two Steampunk Batman figures, gold and steel, remind me of the animation Batman: Gotham by Gaslight. Batman’s costume may not have looked like these in the movie, but the feeling the minifigures give is close to the atmosphere of the film. I have to admit, I will be getting at least one of these awesome figures. 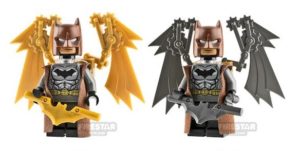 More on the way?

Designing Steampunk figures sure looks like fun, so I wouldn’t be surprised if more will start appearing. I don’t know about you, but I will definitely be keeping an eye out for those! And if you’re looking for loose parts, there are plenty to find right here!

Have you created a Steampunk minifigure before? Or seen one you really like? Don’t forget to let me know in the comments section!

And don’t forget to check out this page to get a chance to have your own design become a part of FireStar Toys family!