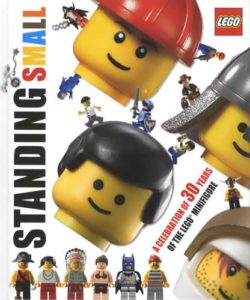 40 Years of Standing Small and Counting!

The LEGO minifigure has been around, in one form or another, for over 40 years. This year for my birthday, a friend gave me a copy of a really cool book about the minifigure. The book is called Standing Small: A Celebration of 30 Years of the LEGO Minifigure. I loved the book! Though the publication date was 10 years ago, the book has tons of information about minifigures. 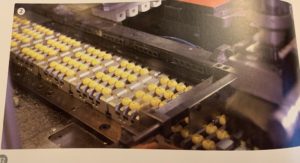 Published by DK and written by Kevin Martell, this large, 96-page book traces the history and uniqueness of the LEGO minifigure from inception to the modern day. It starts, at the beginning with the first ever minifigures that arrived in 1978. These followed nearly 50 prototypes to arrive at the shape and form that weLEGO enthusiasts know today. Do you know which kind of person was the first minifigure? It was a policeman in set #600! Large pictures in the book illustrate how the minifigure is painted and manufactured, and the book tells of each first. For instance, the first shorter minifigure was Yoda, released in 2002. According to Standing Small “there are over 8 quadrillion (8,000,000,000,000,000) possible minifigures” that could be made from all parts currently in circulation. That’s a lot! 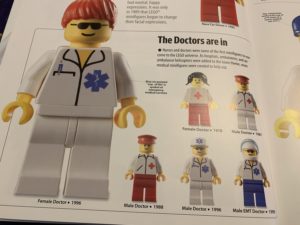 The book transitions into a different look at the history of the minifigure after its introduction. Standing Small shows each major theme of LEGO, and a selection of each of the most prominent minifigures from that theme. First up? LEGO Police and Town. Up to the publication date, the book says that “41 different versions” of a LEGO police-person exists. What I particularly love is that beneath each minifigure person there is a date, indicating release date. This helps to put each minifigure in historical context. For instance, under “Short Arm of the Law” the book showcases a Police Sheriff from 1983, 1996, and 1998. Under “The Doctors are in” we see medical personnel from three decades (including 1978, 1988, and 1999)!

It was particularly fun to see minifigures I owned as a child, such as the TV cameraman from 1998 and the stunt pilot from 1996. I no longer have the cameraman, and that makes me a little sad. He might have to be my next internet find!

I loved to see the inclusion of the LEGO fire brigade as my brother-in-law is a paramedic firefighter. Like the policeman and others, the first firefighter was also released in 1978, though most of the pictures shown in Standing Small are from the early 2000’s. 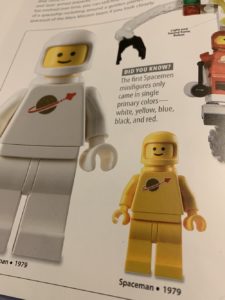 Outside of Town, as in way outside, is LEGO Space! The ever popular Classic Space minifigures have been in production for over 40 years, making them, second to LEGO Town, the longest running themed minifigures and are among the best selling. I myself was happy to see a re-emergence of LEGO Space with LEGO Ideas Exo Suit and the LEGO Movie! (Spaceship!!)

LEGO introduced Johnny Thunder in 1998 as an Indiana Jones-type globetrotting adventurer. His allies included Dr. Kilroy and Pippin Reed and his main villain was Baron Von Barron. Castle, Pirates, and other themes soon followed. The Castle theme saw the production of the first variant of the LEGO minifigure: the skeleton. Since then there have been rock monsters, aliens, robots, and even Incredible Hulks!

Some of the first LEGO sets I ever owned came from the LEGO Aquazone sub-theme. Introduced in 1985, it was the first theme to have sub-themes of its own: Aquanauts and Aquasharks. I had a few of the Aquasharks sets and my brother got Aquazone and we used to have terrific undersea battles! It helped tremendously that the rug in our shared bedroom was blue! It turns out that the Aquashark commander that I owned was released in 1996, according to Standing Small. I miss that guy!

Jedi and Spiders and Wizards, Oh My!

Of course, in 1999, 20 years ago this year, LEGO partnered with Star Wars to create the first ever licensed LEGO theme, with Luke Skywalker being the first licensed minifigure. Prior to this date, no minifigure was based on a licensed character, or “real” person (such as an actor). The minifigure representing Jar Jar Binks was the first to have a specially molded head instead of the traditional yellow minifigure head.

For the minifigures carrying lightsabers in the mid-2000’s, LEGO electrified the first minifigure making it possible to light up the saber by pressing down on the figure’s head. I had a light up Darth Vader and remember being disappointed when the battery finally gave out. However, I do remember that it took a while and many lightsaber battles before that happened! LEGO Star Wars minifigure heads were also released for the the first time in flesh tones. Prior to that, all LEGO minifigure heads were done in yellow. In this way they were universal. A few years into the Star Wars production run, LEGO decided to make the Lando Calrissian minifigure reflect actor Billy Dee Williams with a dark flesh head. Shortly thereafter the rest of the characters followed.

Following the success of Star Wars, LEGO licensed Spider-Man in 2000 and Harry Potter in 2001. Together with Star Wars, superheroes and wizards are among LEGO’s most popular themes year after year. Quirrell of Harry Potter was the first ever minifigure to have a dual sided head, allowing him to go from good to evil with just a twist! I had no idea he was the first!

Since Star Wars, other licensed themes include Spongebob, Indiana Jones, Speed Racer, and LEGO Avatar: the Last Airbender. (Some of those themes I had forgotten.) 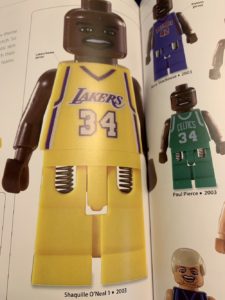 LEGO released a soccer theme in the year 2000. Followed by the NBA (America’s National Basketball Association), LEGO soccer led the way for a few unique minifigures of its own. Does anyone remember the NBA players with springs in their legs and oddly shaped arms? According to Standing Small, a team of “four designers and six engineers [took] a full year to develop” those springs and arms so that the minifigures could jump, dunk, and hold on to the LEGO basketball element. Wow! That’s a lot of work!

Of the NBA teams, 24 players allowed LEGO to use their likenesses for the theme, including Shaquille O’Neal, Jerry Stackhouse, and Antoine Walker.

I found, to my great surprise, at the end of Standing Small, a section on fan produced minifigures. Minifigures.com allows fans of LEGO to collect many unique minifigures. Using printing techniques, they produce their own minifigures, and LEGO gives a nod to this. The books says that these MOCs (my own creations) are “a vital part of the LEGO fan experience”. Thanks for that, LEGO! Always nice to find a company that encourages their fans to create beyond what the company does in pursuit of fun.

After all, isn’t that what LEGO is all about? Put in the comments below your favorite minifigure, custom or authentic.

I look forward to what we can build together!