Welcome back once again to Myths and Minifigs! After a couple of posts looking at LEGO movie monsters from different parts of the world, it’s time to take a deep dive into a different world entirely: The one that exists beneath 70% of our blue planet.

As a species, we have always been fascinated by the inaccessible, deep places of the world, crafting tales of monstrous leviathans that dwell at the bottom of the oceans to try and sate our curiosity. To this day, barely 5% of the ocean floor has been explored, and even less has been seen by human eyes. It is very much still the mysterious frontier that it was for our ancient ancestors, and it is their stories and myths that we’re going to look at today!

LEGO and their partners have drawn on a lot of different myths and legends about the sea, but we’re all probably most familiar with the mermaid (and, to a lesser degree, the merman). Since 2005, LEGO have produced more than 20 different merfolk minifigs, both original designs and characters from licensed IPs like Disney’s The Little Mermaid and Pirates of the Caribbean: on Stranger Tides. But what is a mermaid?

In its simplest terms, a mermaid or merman is a creature with the upper half of a human, and the lower half of a fish. From there, their descriptions can vary greatly. The Syrian goddess Atargatis (one of the earliest mermaid myths, dating back 4,000 years) was benevolent and beautiful, while the Sirens from Homer’s Odyssey had the faces of hungry dogs and would lure sailors to their deaths with beautiful singing.

This latter element of danger was key, even when mermaids were depicted as having the faces of beautiful women – appearances were deceiving, and hid murderous intentions. Sailors and pirates agreed the world over that seeing a mermaid was an omen of doom, and if they fell victim to their sweet song, the seamen would be dashed against perilous rocks or drowned in the black depths.

Many historians believe that what sailors were babbling about as ‘mermaids’ were in fact ‘manatees’: flippered, friendly-faced aquatic mammals found on both sides of the Atlantic Ocean. Manatees also swam in shallow waters, and would likely have come quite close to any ships that were near to the coast, or dangerous, jagged rocks.

Did you put your name in the Goblet of Fire? 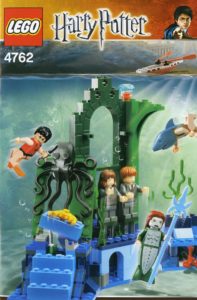 The first mermaid minifigure came in 2005, in 4762 Rescue from the Merpeople from Harry Potter and the Goblet of Fire. The set depicts the scene from the Triwizard Tournament where Harry and the other champions must each rescue someone dear to them from the clutches of some very fishy-looking merfolk. Far from Ariel from The Little Mermaid, the Wizarding World’s merfolk were more animalistic, less human and more like creatures from the sea floor. The minifigure mostly reflects that: while its hands are (oddly) flesh tone, the skin of the face is light bluish grey and shows a stoic snarl; its eyes are black, narrowed, and ringed with yellow; its hair is a vibrant crimson (funnily enough, the same piece originally used for Dumbledore’s long locks); and instead of legs, LEGO gave us the first mermaid minifigure tail.

All one piece, the tail sticks straight out and down, a couple of times the height of regular legs, with stud holes on the bottom to let it stand up on a baseplate. The design was not ideal, forcing the mermaid into an awkward pose, but it was a bit step forward from having to make blocky, brick-built tales. 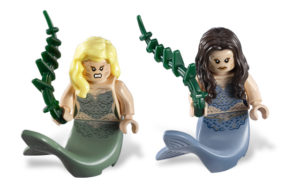 The piece was used for a while, mainly in iterations of the Pirates theme (such as in 6299 Pirates Advent Calendar, as a less hideous mermaid), and wouldn’t be replaced until 2011 when LEGO ventured into licensed pirates for the first time. Specifically, a wave of sets for Pirates of the Caribbean: on Stranger Tides (a film I would usually go out of my way to not even mention) which included two mermaids in 4194 Whitecap Bay. The new piece was a breathtaking upgrade: roughly the same height as regular minifigure legs, but bent and twisted to give the impression of an elegant SWOOSH! The front even had space for printing!

With that, this new mould became LEGO’s standard for mermaid minifigs, and we have seen it used time and again. It appears in lavender for Marsha Queen of the Mermaids from The LEGO Movie, sand green for the proud Ocean King (who, as I discussed in a previous blog, is clearly the Greek god Poseidon), and was used at last for the minifig it was always destined for. In 2016, when LEGO released 71012 Disney Collectible Minifigures, we finally received a minifigure of Ariel from The Little Mermaid herself, possibly the most famous mermaid in popular culture.

With LEGO recycling fantasy themes like Castle and Pirates, it’s only inevitable that we will see plenty more mermaid minifigs. But what about other LEGO monsters from under the sea? What other creepy crustaceans and foul fish have they made?

LEGO often turns concepts like deep sea exploration on its head for a high-octane action theme. The 90s were full of underwater factions, and the mid-2000s saw lots of LEGO monsters of the sea. Yet it wasn’t until Atlantis in 2010 that LEGO made some more humanoid denizens of the deep. Humanoid yes, but still monsters… 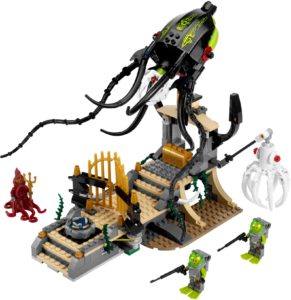 The red-suited explorers came across a whole slew of Atlantean minifigures who were themed after deep sea creatures. It would be remiss of me not to start with the most easily recognisable: the shark. Light grey with dark blue swirly-scales printed on his torso and legs, the shark also sported a rubbery shark’s head that fitted much like an alien from the Star Wars theme. It is a little unwieldy, and often looks like it’s peering diagonally upwards rather than ahead, but it’s imposing when stood next to other minifigures.

LEGO also populated Atlantis with a crab-like being, a dark red minifigure with short legs, and a new mold of pincers to clip onto his hands, as well as a huge, intimidating head. Mythologies all over the world are full of myths like these, of huge crustaceans with snapping claws, like the crab Cancer that was slain and thrown into the sky to become a constellation by Hercules. We were also treated to a barracuda, a hammerhead shark, and a manta ray.

The manta ray, all dark blue with black patterns, is a lot of fun, also including a molded head to give a ray-like shape. However, what is most fun to me personally is that between manta ray and the octopus minifigure, the vibe starts to become a little more Lovecraftian… 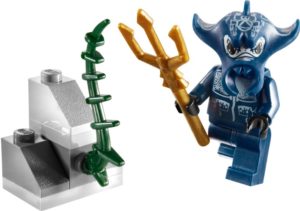 For those who don’t know, H.P. Lovecraft was a horror writer in the early 20th century who primarily freaked his readers with monsters who weren’t exactly evil. They were simply so far beyond human comprehension that they could not be seen without the viewer going mad, and nor did humans really come up on their radar. We were like insects to these ancient elder gods from beyond the cosmos, and they barely noticed our civilisations rising and falling.

In his efforts to create creatures that seemed truly alien and weird, Lovecraft took a lot of inspiration from the sea, and so his most famous creation – the gigantic, sleeping god Cthulhu – ended up sporting an octopus’ tentacles where his mouth should be. This image is invoked by Atlantis’ octopus-man having exactly that; tentacles hanging from its face. And the manta ray? Well, Cthulhu, Dagon and the other gods had many minions called Deep Ones, and the manta ray is fiercely evocative of their strange deep sea adaptations.

So as you can see, even our oceans are a rich source of mythology and fantasy, and with LEGO drawing on both regularly for everything from Pirates to Ninjago, hopefully we will see more sea creatures in minifigure form. Thanks for joining me again for Myths & Minifigs! For now though, it’s time to close the coffin lid, and snuff out the lanterns. You can take off your diving masks too, as next time we will look at some mythical minifigures back on dry land, and the realms of fantasy they inhabit…