Hello and welcome back to Myths & Minifigs! We’ve had a few diversions into the realm of cinema, and how LEGO has approached minifigures based on more recent mythological material, so I thought for this article we’d take a step back again and look at something more traditionally fantastical: LEGO Elves.

When you say “fantasy”, it conjures up images of certain races and creatures, ranging from the familiar, stout bodies of dwarves to the less widely known beasts of the Dungeons & Dragons Monster Manual. Even at its darkest, there’s a whimsical aesthetic, and LEGO has captured this excellently time and again. Because of the sheer volume of “fantasy” minifigures, I’m going to take a look at them one faction or species at a time, starting off with LEGO’s ethereal elves.

What is an elf?

Strictly speaking, there isn’t one kind of elf. If we go back to some of the root legends, among the Norse and other Germanic cultures, elves are more like fairies: trickster folk who sometimes help and sometimes harm the humans they share the countryside with. Most were short and childlike, and for every helpful domovoi who would help clean a carpenter’s home at night, there was a vengeful kobold who would damage a farmer’s crops. These vertically-challenged elves are what we now think of as the elves working at the North Pole. For this blog, I won’t be talking about Santa’s Christmas elves. There’s enough around to save them for a blog at a more festive time of year.

Other legends spoke of tall, beautiful creatures, whose fair grace and exquisite songs would lure men and women close, usually to cruelly toy with or entrap them. Being so normal, we humans got the rough end of the stick with a lot of mystical beings, and elves were no exception.

Generally, the best place to look for elf lore is Norse mythology, which tells of Alfheim, the realm of the elves. There’s also Svartalfheim, the land of the dark elves, but because of a few mistranslations this could actually refer to dwarves instead of shadow-dwelling elves. Norse epics provided a lot of the inspiration for J.R.R. Tolkien’s Middle-Earth canon (and even the names for his characters!), which in turn is where a lot of people today get their ideas about elves from. Pale, tall, beautiful, with pointy ears sticking out under long hair, and a deadly, mystical grace to their every step. Attuned to nature but advanced in their knowledge of magic and the arts, and as close to immortal as any living being can be. The Lord of the Rings definitely cemented this image of the elf into most peoples’ minds.

Lord of the Bricks

With that in mind, our first stop on the tour of LEGO’s elven figs is in the sets based on Tolkien’s universe. Originally thought by fans to be too dark for a LEGO theme, I think many of us were surprised and delighted to see waves of sets for all six The Lord of the Rings and The Hobbit movies. Naturally this included a wide range of elves, possibly more than anticipated thanks to Peter Jackson’s largely-unwelcome alterations to the story of The Hobbit. 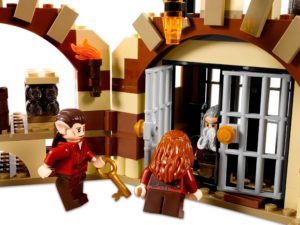 In the books, we encounter three key factions, each with their own, unique qualities, but some underlying similarities: Rivendell, Lothlorien, and Mirkwood. The minifigures don’t really reflect this, and from their earthen, green and gold tones, they could for the most part be from the same kingdom. However, we do still get a lot of nice torso prints – from the golden scale-mail worn by Legolas to the warmer, olive green tunics of Mirkwood guards – and a plethora of great new flesh tone faces. Most of their heads are also double-sided, giving us multiple expressions for each character. It may sound silly, but getting two expressions of a female, freckled face has been pretty useful for my animations, as have the stoic yet faintly sad features of the standard Legolas minifigure.

Whether Tolkien’s elves should in fact have pointed ears is the subject of much debate, but for the purposes of the minifigures, having the ears as a distinguishing feature really makes them stand out against the broader backdrop of the theme’s minifigures.

The real standouts of the Tolkien elf minifigs are Galadriel and Thranduil, the queen of Lothlorien and king of Mirkwood respectively. Both have dual-moulded headgear, with long blond(e) hair broken by Galadriel’s silver and Thranduil’s coppery-gold crowns, clearly denoting their higher status than the other elves in the theme. 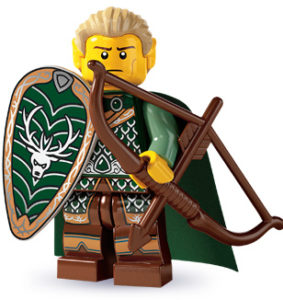 But LEGO had actually made their first fantasy elf a year prior, in 2011. Before the license to any Tolkien material had been publicly announced, LEGO released a Tolkien-inspired Elf as part of 8803 Collectable Minifigures Series 3. He shares many similar characteristics to the officially-licensed elves of Mirkwood, Lothlorien and Rivendell, but here his blond hair is short, and sporting yellow ears (and skin) rather than flesh tone. The design of his scale-like armour is beautiful, but more cartoonish and soft than his Middle-Earth counterparts. Still, as one of the only ways to get yellow elf ears, he is a treasured minifigure, and very expensive on Bricklink or eBay because of this.

He wouldn’t be the last of his kind, as in 2017, in 71018 Collectable Minifigures Series 17, LEGO released Elf Girl. Bedecked in a light blue dress, but with printed-on silver pauldrons that extended to dual-moulded arms, Elf Girl was an excellent addition to LEGO’s fantasy realm. She also carried a sword and shield, and her unique hair mould (which, yes, had yellow ears poking out) is an unusual shade of nougat, making the minifigure even more intriguing.

LEGO are, from time to time, fantastic innovators, and while the Friends line raised some questions about sexism and encouraging girls to conform to gender stereotypes (that’s a complex debate, and not one where I can do justice to either side of the argument here), its style in turn have us a novel and unique original series: a whole Elves theme! 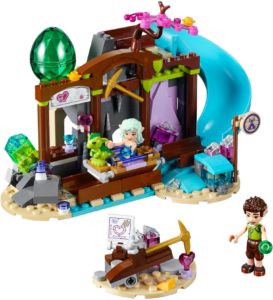 With its outlandish designs, Elves was a bit of a risk for LEGO to take. Some LEGO fans might, rightly or wrongly, turn their nose up at the mention of these elves, but that’s a matter of personal preference. Unlike the Collectable Minifigures or Middle-Earth sets, the LEGO Elves line was populated with Friends-style minidolls which – aside from their amazingly-detailed hairpieces – have parts incompatible with regular minifigures.

However, with their elemental styling, amazing array of both bright and pastel colours, and new hair moulds, these elves were (at least in my opinion) creative twists on the legends and folk tales, and many of their hairpieces (like Aira’s lavender hair, or Azari’s dark red hair and dark flesh ears) will no doubt come in useful in fantasy builds for builders for years to come.

Away with the elves…

And like the elves of Middle-Earth, who must set sail for the eternal lands to the west, now we too must depart. Thanks for joining me again for Myths & Minifigs! For now, it’s time to close the coffin lid, and snuff out the lanterns. Next time, we’ll take a look at another fantasy race you’ll probably know, one that mines and tunnels under Misty Mountains cold…