Christmas is coming, and that means we are ready to open advent calendars! For this year, LEGO made four advent calendars (City, Star Wars, Friends and Harry Potter) and I am sure you will find something interesting for you. This time I want to draw your attention to Star Wars advent minifigures included in these advent calendars. The newest one, 75245, is the 9th Star Wars advent calendar ever (only City has more versions)! Why are they so special? Unlike City ones, where you get a Santa figure every year, Star Wars calendars come with a special (and exclusive for that year) advent figure. I will review all of them excluding this year one to avoid spoilers. So, if you are like me and you don’t want to see gifts from this year advent calendars, you are safe. 🙂 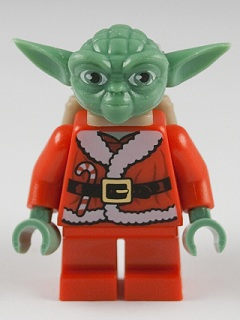 LEGO started the series of Star Wars advent figures excellently! They choose Yoda to be Santa. His green skin colour looks perfect in a red Santa jacket with fur. Black belt with candy is such a cute addition to this special minifigure. Yoda is wearing an open backpack allowing you to put two 1 x 2 tiles (gifts) in it. Who knows what presents he is bringing to all good Jedis in the Republic! This 900-year-old Jedi master looks amazing as Santa. I can say that only the lack of leg printing is a minus here. Head isn’t exclusive either, but there is no need to change it in my opinion. 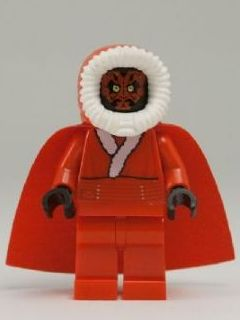 After a Jedi Santa, we got a Sith one! You don’t believe me? Well, that’s the truth! In 2012 Darth Maul got the chance to be a jolly man who carries a bag full of gifts for children (or in this case, for everyone in a galaxy far far away). He is one of the favourite evil Star Wars characters mostly recognisable by specific skin colour and his double red lightsaber. Red cape and red hood are looking so good on Maul, as well as the jacket with fur (torso is different than Yoda’s from 2011). Unlike Yoda, he has normal legs and I expected some kind of print here, so I can say that this is the only imperfection of the minifigure. 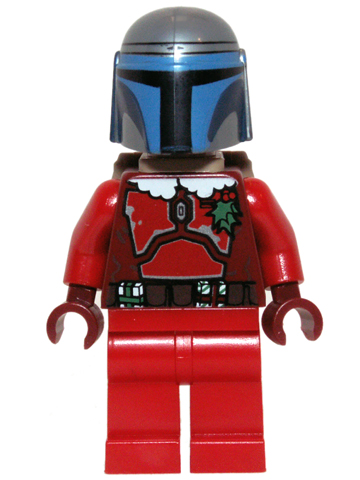 Who loves Disney Plus series “The Mandalorian”? At this moment, I will bet that the answer is most people who are reading this. This is the reason why I think that Santa Jango Fett will be on wishlists this holiday season! New Santa torso is made especially for him, decorated with fur, mistletoe and little white gifts on the belt. I am impressed with the details, and in my opinion, this is the best torso in the first three years of the Star Wars advent calendars. Legs are simple, without print and both head and helmet appeared in sets before. The backpack is included too. 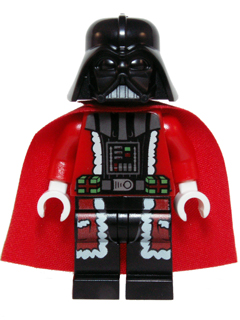 Star Wars without Darth Vader? No way! We got another bad guy as Santa. Looks like LEGO wants to tell us that even evil characters can be good during Christmas time. It is interesting that when Star Wars calendar for 2014 was revealed at a Toy Fair where photography isn’t allowed for journalists but only writing a description, many people asked if Darth Vader would have a red helmet. The red colour is usually used for prototype bricks in factories and they are expensive and of course, rare on the secondary market (LEGO doesn’t allow selling brick prototypes). That was the only “disappointment” about the figure. Darth Vader wears a Santa jacket and belt with green gifts. The jacket is even printed on legs and I think this figure is simply perfect. The red cape is a nice addition too. 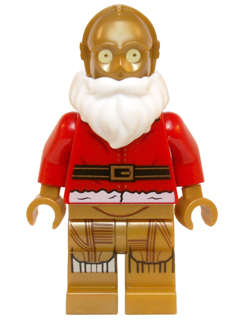 In 2015 LEGO made an awesome reference to old Star Wars holiday picture of well-known droids, R2-D2 and C-3PO. They both are included in the calendar but C-3PO has the privilege to be 24th gift because he is wearing a Santa suit. Recreating R2-D2 was easy to work, they added him reindeer horns and it turns out perfect.Unlike the picture, it is not possible to put Santa hat on C-3PO head because, as you can see, he doesn’t have a stud on top of his head. The only exclusive part is his torso, legs and head are from usual C-3PO figures. Beard fits nice to his unusual head. 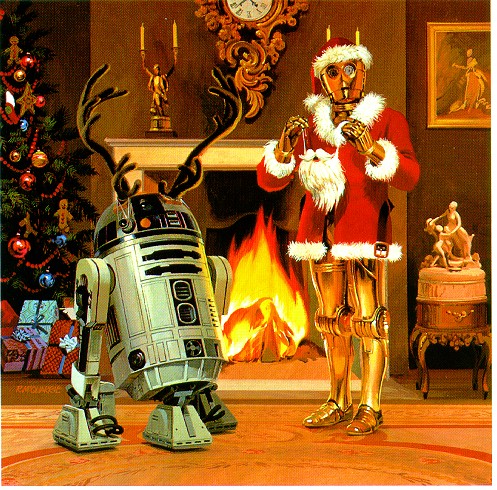 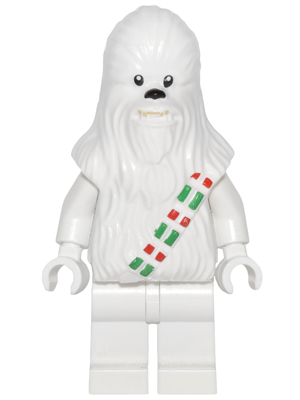 For the first time in Star Wars Advent Calendars history, LEGO decided not to include Santa figure of a Star Wars character but the snow version of some of them! Snow Chewbacca is completely white, opposite of his usual brown/reddish brown colours in LEGO sets. His belt reminds me of a Christmas tree with red and green lights which are so funny. This three-part minifigure looks like little LEGO Yeti which makes it really unique. I think most collectors love it because of his simple looking and huge possibilities as a figure in creations. For example, you can use it on planet Hoth and imagine that Chewbacca was covered with snow during an avalanche. As I mentioned before, he can be a Yeti in minifigure scale too. 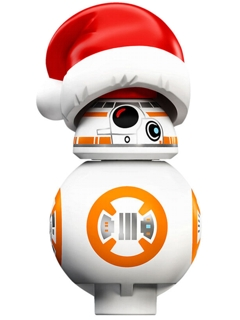 I must admit that I wasn’t impressed with this “holiday special figure”. It is classic BB-8 figure with only a Santa hat. BB-8 is available in a lot of sets and this gift was nice only if you hadn’t had this rolling droid in your collection. The figure itself has detailed printing, orange and silver looks nice, and I personally love the stud addition at the bottom which allows you to put a figure on the plate (or on some flat surface). 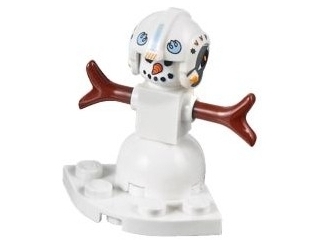 When you look at this figure, you will probably think that it is so bad, but maybe you are only half right. Snowman has an exclusive printed head and helmet and that is a big plus. Star Wars helmets are always nicely decorated, and this one isn’t an exception. Rebel pilot helmet contains Bright Light Blue Rebel Logo and Dark Bluish Gray Sides Pattern which is so cool. Speaking about the snowman itself, I would  suggest looking at Mr. Melty than this one. 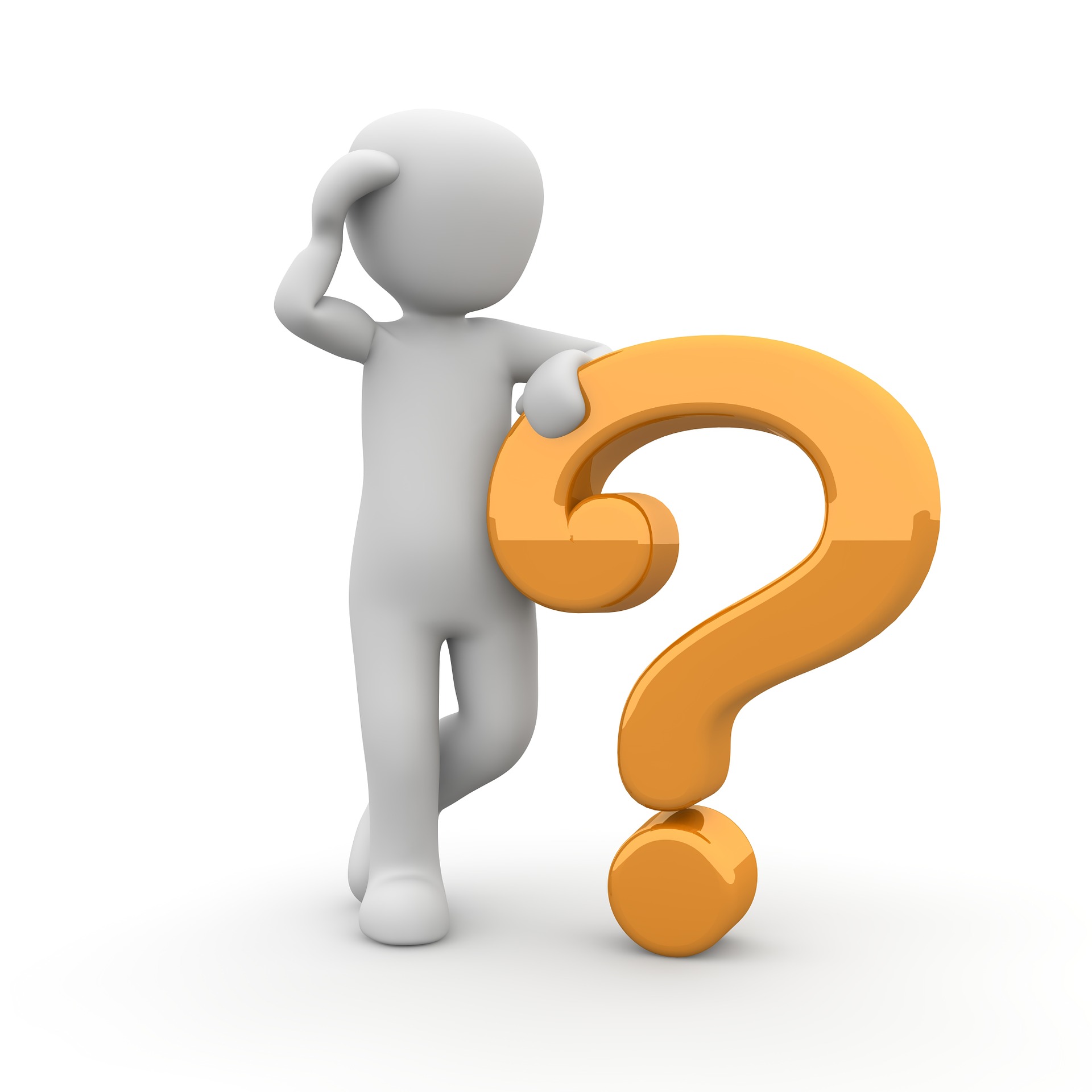 As I said before, I won’t spoil you this year’s special LEGO Star Wars Advent minifigure, but I can promise you that you won’t be disappointed.

Overall, I can say that I love the idea of adding specially designed characters from the Star Wars universe to advent calendars. Some of them look really good, while some are just one new part plus already existing parts from previous sets. I hope LEGO will continue producing Star Wars Advent Calendars and that we will get the opportunity to add more special edition of Star Wars characters to our collection (for example, Han Solo, Obi-Wan, Anakin, Lando, Kylo Ren…) What do you think about them? Do you have a favourite one? How many do you own in your collection? Did you already buy the advent calendar for this year? Let me know in the comments section! I hope you found this article informative and that you learned something new.

All the pictures are from Bricklink. The picture with a question mark is from pixabay, while Star Wars Christmas Card image is from starwars.com.

LEGO Legends of Chima: Where to (not) Find Them