I am currently building a LEGO Star Wars Millennium Falcon. It is a custom “my own creation” or MOC, and I first talked about it on Star Wars Day, May the 4th (Be With You!). As I continue to share that build with you, I thought I would talk about my favorite LEGO Star Wars minifigures. 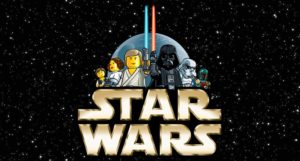 Look as good, you will not!

I remember the spring of 1998. I subscribed to the LEGO Mania Magazine, and with great excitement, beheld the issue that first introduced the LEGO Star Wars line of licensed sets. As cool as the X-Wing, Naboo Starfighter, Slave I, and of course, the Millennium Falcon were to see in LEGO, what caught my imagination most were the minifigures! Up until that point, I had very few LEGO minifigures in my collection. My family never had much money, and as a result, I never had many LEGO sets. I used to make my own figures using a few 1×2 bricks and a 1×4 brick in the middle to represent arms. Rudimentary, for sure. 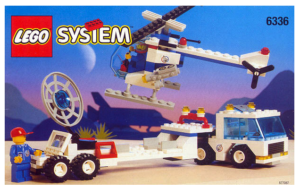 I don’t remember which minifigure I owned first, but it probably belonged to an early LEGO System set 6336 Launch Response Unit. That set fascinated me. I loved the printed keyboard tile, the flip up display with sticker, and the helicopter. But beyond that, I had actual minifigures to populate my own creations! No more brick built bipeds for me! Eventually I received more LEGO minifigures, but when the Star Wars line hit the news, I wanted Star Wars minifigures. After all, building an accurate X-Wing and playable Millennium Falcon took over my priorities. I needed a Luke Skywalker, a Han Solo, a Chewbacca, and a Darth Vader for them to defeat! 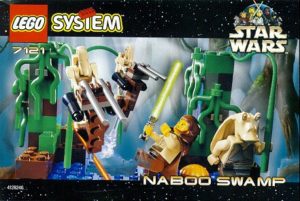 I spent hours examining the pages of those Mania Magazines, paying attention to every detail of the sets. Hours went by during which I imagined which figures I would eventually own. Ironically, I never did own any of those initial minifigures. My first Star Wars figures were from 7121 Naboo Swamp: Qui-Gon Jinn, Obi-Wan Kenobi, and Jar Jar Binks (who, incidentally, had the first molded head; Yoda’s came later). I still own those figures, somewhere in my vast Star Wars collection. To date, I have over 300 Star Wars figures alone. That is a far cry from the kid who had none! 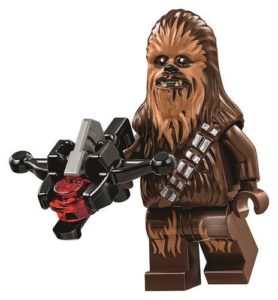 So, which minifigures are my favorites? Not surprisingly, they correspond to some of my favorite characters. It excites me to see each figure updated as LEGO becomes more sophisticated with their printing and graphics resolution and accuracy, but my top favorite LEGO Star Wars figure has got to be Chewbacca. Chewie is my favorite non-human character. He is based on George Lucas’ dog (I 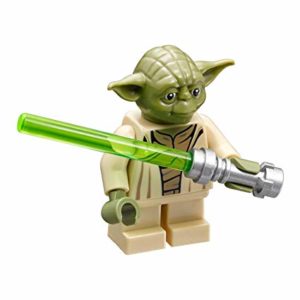 love dogs!). Chewie is a gentle giant, noble and strong: I love that Wookiee! Second would be my second favorite non-human: Yoda. I have been delighted my whole life with Yoda. His humor, wisdom, and ancient love attracts me to that little muppet. Of great enjoyment is the fact that while he seriously trains Luke to face his greatest challenge and his own Dark Father; Yoda does so with grace and joy. Yoda is the ultimate trickster! 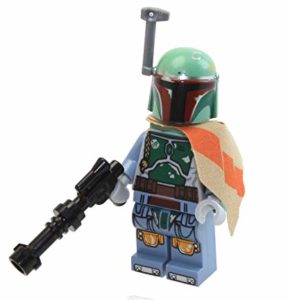 Following those two, in no particular order are Leia, Luke, Han, Vader. I like Artoo Detoo too, and now have more LEGO minifigures of him than any other single character. Boba Fett is interesting to me. I have several of him, but I have not bought into the Fett love that so many other fans of my generation possess. I like the character, and his design for sure, but don’t really feel an emotional connection to his story. However, I absolutely love his minifigure! It shows off the best of LEGO design and attention to detail, from printing to helmet to jetpack! His figure would have to be #4 for me, after the most interesting character from Star Wars lore… 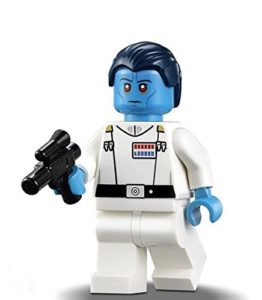 From the expanded universe to the Rebels animated series, Grand Admiral Thrawn is another favorite minifigure. I am super glad that LEGO produced him, and that Lucasfilm included him in the series first. Growing up without any films before Hope or after Jedi, I loved Timothy Zahn’s books about the continuing adventures of Skywalker, and in particular, his character of Thrawn. Introduced in Heir to the Empire, Thrawn emerges as an alien military genius and gentleman: mysterious, compelling, and, well, blue. Talk about cool! Buying the set that included Thrawn brought together my love of LEGO, Star Wars, literature, and film. A great day!

Fast forward to today. I am building and rebuilding a MOC of the Millennium Falcon. I am using two existing sets, one from The Force Awakens, the other from A New Hope, to create a hybrid Falcon of my own design. But I am not building simply for display or the challenge. No, I am a story teller. My chosen media will be LEGO and photography.

Set sometime after Return of the Jedi, following the collapse of the Empire at large, my Falcon will be piloted by Han Solo, Lando Calrissian, and Chewbacca. They will encounter another ship, a Corellian YT-2400 (more on that later) with its own crew and adventure will ensue. Therefore, I need a Falcon that resembles, but isn’t, what we see on screen. The radar dish is different (as Lando lost it while destroying the second Death Star) and some of the interior will be a bit altered. But it is still the Falcon we know and love, complete with her crew.

The YT-2400 will actually be the hero ship in my Star Wars story. I am going to construct that out of the remnants of two Kessell Run Millennium Falcons, as the main body of both ships is the same, except the 2400 does not have forward mandibles. That crew is being assembled from my collection of Star Wars minifigures and is still to-be-determined.

I hope to increase my LEGO Star Wars minifigure collection. On tap to collect are some of the more interesting aliens and rarer figures. I still need a good version of Emperor Palpatine. Rio Durant from Solo needs to join my crews. I always need more stormtroopers and rebel troopers to round out my armies. Figures from the sequel trilogy intrigue me as well. I need a Poe Dameron, a Vice Admiral Holdo, and from the other adventures are a few droids that I would love to populate my builds and stories. Well, as the wallet allows, right?

And as always, I look forward to what we can build together!

The Secret Life of LEGO Pets