Ladies and gentlemen, you have no doubt (!) noticed the absence of the Collectible Minifigure Series stories for several weeks now. There’s a very solid reason for that. You see, a few weeks ago, my house was invaded once again. It was the strong lady figures of the CMF series, demanding it was time I write something regarding women. Of course seeing myself as one of them, I agreed instantly. Besides, have you ever heard so many women nagging at once? I assure you, it’s not a pretty sight – or sound- .

But then, just as I was starting, a small group of men arrived. They were cool-looking, sure, but didn’t seem too significant. And definitely not that loud! Before I knew it, they were arguing. The ladies were saying it was their turn, the gentlemen were saying they have been neglected… and I was right in the middle, unable to write anything.

From time to time, the ladies kept going away and coming back. I always thought they were going to get more reinforcements, so that they would win the argument. Wrong! Apparently, they were checking if the water was cool enough to swim!!! As soon as it was, they all put on their bikinis and left for good. Such a shame… I had an opening line ready, saying how men were always oppressing women and so on and so forth.

Oh well… I guess I have no choice but to talk about the remaining men, now.

These gentlemen have one thing in common: They are men of speed. They either drive, ride or fly high speed – and sometimes quite dangerous – vehicles. Let’s start with the oldest and move on from there, shall we?

The Pilot (CMF 3) is one of the most experienced minifigures when it comes to flying. He has flown all kinds of aircraft, small, large, old, new… He is one of the few airplane pilots to fly a spaceship. According to all the other pilots, he is a true legend.

Even though he is old, he still feels like a young man. He told me no matter how many times he flew, he can always feel the butterflies in his stomach when he gets in a new craft and turns on the engine. He believes that’s what keeps him young. “When I hear a young one thinking about retiring” he says “it makes me sad. If there’s one thing mankind does that defies the laws of nature, it’s flight. Do you know how many times I heard the phrase ‘If God wanted us to fly, he’d give us wings’?? To those I say ‘Well, he may not have given us wings, but he gave us our minds to figure it out all on our own!’ Non-believers give me the heebie jeebies…”

He told me some of his adventures – and boy, did he have fun! “Of course” he said “they sound fun now. At the time, I was scared silly, and too proud to admit it!” Still, he has no regrets of having lived his life to the fullest. And he has no intention of retiring, either. He believes young pilots should always have a good example, and he is determined to give it to them for as long as he can.

The Motorcycle Mechanic (CMF 10) is the next speedster on our list. Don’t let the name fool you, though. He may be a mechanic now, but he spent more than 30 years on a bike, traveling the world. Like the Pilot, he has ridden countless different bikes, participated in races, won many trophies, and was the first one to try out all the prototypes at trade shows. He still enjoys the occasional ride, but the thrill he used to feel isn’t there anymore. When he first started feeling this way, he decided to leave his love to remember her with the good memories they had together.

As a mechanic, he has made quite a name for himself, too. Apparently, his way of fixing bikes include a lot of hitting and smashing, which can seem a little unconventional at first. He says dents, clanks and rattles are what gives the bike personality. No matter how tattered the bike looks at first, though, once he is done with it, you wouldn’t recognize it. It truly shines like a star, and goes faster, further, and much, much louder than before! 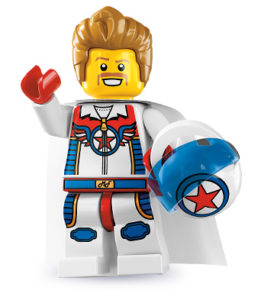 Next, we have the Daredevil (CMF 7). Compared to the other guys, he is the odd one out. While they mostly specialize in one kind of vehicle, the Daredevil has tried almost all of them. Motorcycles, race cars, water skis, you name it, he’s done it. Heck, he lost count of how many times he was thrown out of a cannon! He loves living dangerously, and he’s good at it, too.

However, he has a weak point. While riding a motorbike through flaming hoops comes easy to him, going to the farmer’s market to get a bag of tomatoes will have him running scared. And don’t even let me get started on the post office! His family wants to make sure he’s okay, so they ask him to send them postcards frequently. He hates to admit, but going to the post office to do just that makes him shiver. No sir, a regular, simple and safe life is just not for him!

Burning Through the Sky

Rumor has it that the fate of the Race Car Driver (CMF 3) was foreseen long before he knew the word “speed”. As a child, he wandered off one day and met a mysterious man, who told him that he wouldn’t know the meaning of slow all his life. He didn’t pay much attention to the old man, and soon after he forgot the conversation ever happened. But as soon as he was old enough, he started riding tricycles, bicycles, motorcycles, and never stopped. He tuned and tweaked all his rides to always be the fastest rider possible.

Then he promoted to cars. He modified them, attended races, and won each and every one. It was only when he was offered a job as a professional driver that he remembered the old man, and what he had said to him. He felt proud to have fulfilled his destiny, and got in his car to start his new adventure. 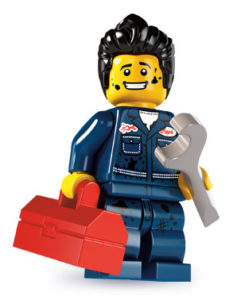 The last, but definitely not the least, is the Mechanic (CMF 6). While he has always been fascinated by cars, unlike the others, his true passion lies in modifying them instead of driving. If you let him work on your car, there’s quite a good chance that you won’t recognize it when you get it back.

Of course while some people work with him because of this, others avoid him at all costs. You see, even though he is really good at what he does, he has difficulty knowing when to stop. According to him, you can always improve a car, no matter how good it looks. A new paint job? Sure. Ejector seats? Well, actually… Submarine propeller? No thank you!!

He told me that he has been gathering parts to design the car of his dreams. It will go on land and water alike, and with a few tweaks, it might even go to space! If only he could find the perfect customer who would let him to that…

Once again, we’re at the end of today’s article. Hopefully the ladies will be back next week, all tanned up and ready to start nagging… ahem… talking again, and we will get to hear their stories at last!

All images are taken from www.brickset.com

The Signature Figure: The greatest minifigure of all!