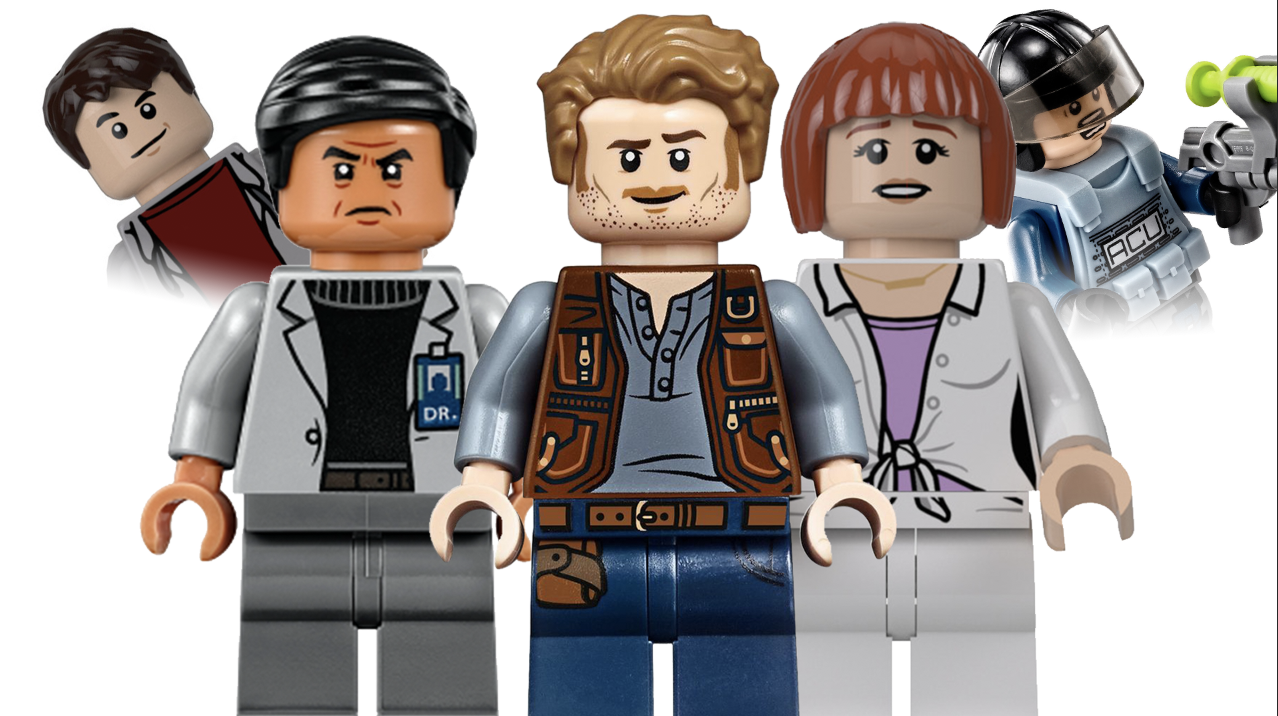 Over on the Firestar Toys blog I have been dedicating all this month to LEGO Dinosaurs to mark Jurassic June.

Now, I know what you’re thinking right off the bat. “Tom, the dinosaur sets are focussed on the moulds for the animals and the builds of the sets. How could you talk about minifigures?”. Well, my friends, the Jurassic World sets have brought us some incredibly cool minifigures over the past few years – with some unique prints and details which are useful within the LEGO world. Within this article, I wanted to breakdown some of my favourite minifigures from the LEGO Jurassic World line – and I also wanted to discuss a little more about how these great minifigures can be repurposed within the wider LEGO world.

Without any further ado, let’s jump in and look at the Best LEGO Jurassic World Minifigures. 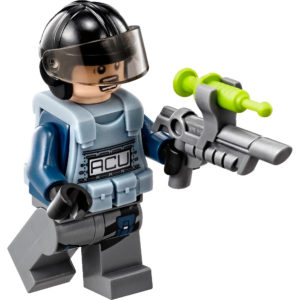 When it comes to useful minifigures, it seems fitting to start with one of the most prominent within the original Jurassic World line, the ACU trooper. The ACU troopers were the park’s containment force within the Jurassic World film – deployed in a tactical manner to contain dinosaurs which broke out so that they could prevent any guest loss of life.

The LEGO minifigure is incredibly unique – coming with a sand blue tactical vest with ‘ACU’ printed on the front. However, it is under the body armour where this minifigure is the most useful, as it includes a nice blue printed camouflage pattern with grey webbing and pouches layered over the top. This minifigure would not look out of place on something like a Navy MOC – where I feel it would really fit in. The dark grey legs are also incredibly useful here – coming with an assortment of pouches and straps which are very useful within other modern settings. The only downside here is the presence of a JW logo on the back of the minifigure.

Overall, the ACU minifigure is incredibly useful. I could picture the elements incorporated here being used on anything from Navy Minifigures, to LEGO City SWAT teams. The versatility and generalness of this minifigure is its strongest aspect. 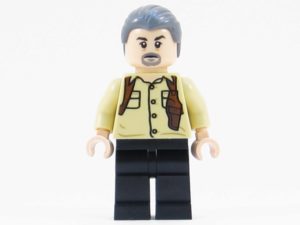 The next minifigure I wanted to touch on is Vic Hoskins – the head of In-Gen’s security division and the man in charge of security at Jurassic World. Hoskins, although a simple minifigure, includes an incredibly useful torso piece. His tan safari shirt with brown shoulder holster would be incredibly useful for a variety of characters – ranging from military soldiers to big game hunters. I could even see his shirt being used for a Star Wars character – as it is generic enough to work successfully I think. The newer version of Hoskins, released in the 2019 Jurassic World line, includes even more intricate detailing – including a sharper torso print and extra detail on the shoulder holster. This would also be a great minifigure to repurpose for a variety of purposes – as it keeps the original design but modernises it somewhat to great effect. 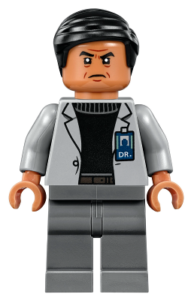 When it comes to the LEGO science world, it has taken us a long time to get useful torsos. Luckily, the 2019 city sets look set to bring us some useful space-themed torsos, and characters like Dr. Wu continue to bring us great opportunities to reuse parts and create interesting characters. The version of Wu in the Fallen Kingdom sets is incredibly useful – purely because he is a lot more generic than the Jurassic World version.

The Jurassic World variant of Wu in his white lab coat featured the JW T-Rex logo on his back – meaning the torso print was not massively reusable beyond the Jurassic theme. This time around, however, he does not feature this logo – and his light grey torso print features a useful ‘Dr’ ID badge mounted to the lapel of his jacket. I could see this torso being used in a variety of settings – from creating a scientist, to creating a different looking doctor minifigure to help staff the most recent LEGO city Hospital. Overall this is a great minifigure – and one with a lot of reusability value. 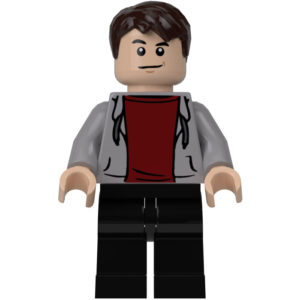 I had to touch on Zach quickly – just because I am sure you will all recognise what has been reused on Zach several times within the LEGO world on this occasion. That is, of course, his hooded torso – which has been a popular addition for both adult and child minifigures. I’m starting to lose track of where this torso is popping up – but I believe one of its newest additions is on the MJ minifigure in the Spider-Man Homecoming wave. 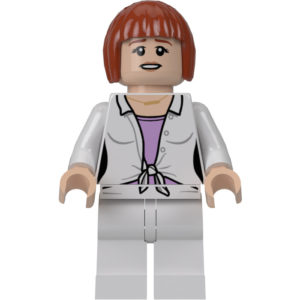 Up next, we have Claire – in her original Jurassic World appearance. I really like this minifigure because I think Claire’s business suit has so many different uses. Even though it is tied together in the middle, I still feel as though this minifigure’s outfit could easily be repurposed and re-used in a variety of different locations. I could easily picture LEGO City’s mayor wearing a costume like this as she addresses a crowd of LEGO City residents, or could picture a member of the LEGO Police department dressing in this on undercover operations. Overall, this is a great minifigure – and one which I think deserves more merit than it gets. 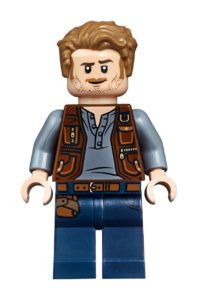 The Jurassic World Fallen Kingdom minifigure of Owen is one which I have seen repurposed in a variety of ways. Not only have I seen his nicely-printed, utility-style jeans reused in a variety of ways, but I have seen his utility vest reused quite a bit too. I’ve seen this on everything from rebel troopers to Zoo keepers – and I’ve even seen people have the incredibly smart idea of putting brown arms on the minifigure to create a jacket as opposed to a vest. This is a nice idea – and goes to show how this minifigure can really be repurposed. I’ve also seen plenty of people retroactively use this head print on their Endgame and Infinity War Star Lord minifigures, allowing them to utilise the newer Chris Pratt likeness which is more accurate to his current appearance.

It is worth noting that I have seen similar ideas and principles used with the old school, Jurassic World, version of Owen too. 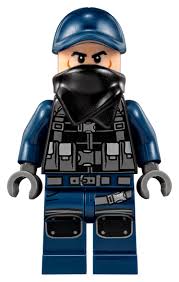 Lastly for today, I wanted to touch on the Mercenary minifigures. Looking at them, you can see they do exactly what they say on the tin. With kneepads, a gun-belt, a tactical vest and tactical webbing, this is arguably the closest we have ever got to a ‘military’ LEGO minifigure. These minifigures would work PERFECTLY for your SWAT or SHIELD personnel – capturing all the key details of these combat-ready outfits. This figure also does not feature the Jurassic World logo on it anywhere – meaning that, unlike the ACU trooper, this minifigure really can be repurposed for use in other situations. I really appreciate the rich level of attention to detail here – creating an overall fantastic minifigure.

In the meantime, make sure to check out some of the other blogs here on the Minifigures.com Blog – and share your photos with us on Social Media! We love seeing what other LEGO fans are up to.