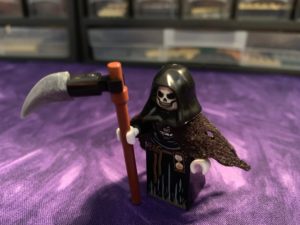 Death fascinates me. Wait. No. That sounds wrong. I am fascinated by the character of Death. Death often appears as a character in literature and popular culture. The LEGO Grim Reaper (presented by minifigures.com) is an excellent representation of Death.

Dying is a difficult subject. We humans do not like to think about our own end. In ancient, and modern literature, Death is often portrayed as a dark character with a tool for taking a harvest of souls.

A Look Fit for Death 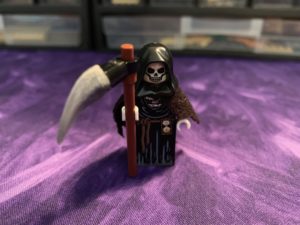 The LEGO Grim Reaper is shrouded in a shredded cape, a custom piece. A glow-in-the-dark skull is covered with a sculpted LEGO hood. Robes are pad printed, and look amazing on a real LEGO torso. Flowing from that is one of the LEGO “skirt” elements that slopes in the back.

Around his belt you see printed an hourglass, indicating the time remaining to a hapless minifigure. A scythe, brick-built, is grasped in a pale hand, ready to reap the souls of recently deceased LEGO minifigures. 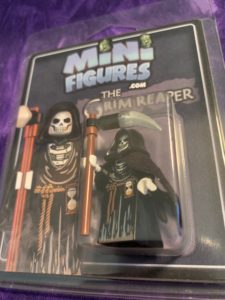 Additionally, the packaging is fantastic. A bubble gently encases Death until you are ready to unleash him. The character card, as always, is custom for this figure. Ghoulish green heads dot the “i’s” in the Minifigures.com logo. The back of the card states the following:

“Everything must come to an end someday, even the humble minifigure. If you need a guide to escort your broken and battered to the beyond, the Grim Reaper is the perfect choice…“

Consequently, if you are a fan of the macabre, then this minifigure is definitely for you. The top-notch attention to detail and high quality is much appreciated. I cannot wait to add this LEGO Grim Reaper to Hallowe’en builds later this year. I may even need to buy another for concurrent builds.

Even in the Star Wars and Marvel universes, death has an avatar. Darth Vader is very specifically patterned after the grim reaper, as is the Emperor, for that matter. Vader even carries his own reaping tool, a blood-red lightsaber.

In the Avengers Infinity War film, the character that meets Thanos on Vormir resembles the grim reaper. That grim reaper is actually Red Skull from Captain America’s history. Red Skull’s face and tattered cloak are not accidentally grim reaper-esque as the Soul Stone extracts a soul for a soul, leading to death.

My first encounter with a grim reaper in pop culture comes from the Ebenezer Scrooge story, A Christmas Carol. There, Scrooge is visited by three ghosts on Christmas Eve who implores him to change his evil ways. The third visitor, Ghost of Christmas Future, is very much the grim reaper.

LEGO minifigures surely don’t want to encounter death. However, sometimes as a LEGO builder, one needs Death to haunt something. Perhaps we need to complete a graveyard, or haunted house, a Vormir diorama, or simply to stalk a LEGO Scrooge. Whatever the reason, the Grim Reaper from minifigures.com fits in that dead space quite nicely.

The existing official LEGO stormtrooper minifigures have blank arms, which is consistent with many other minifigures with plain arms. However, if one is looking for a little more distinction to their collection, they might want to consider custom arms. 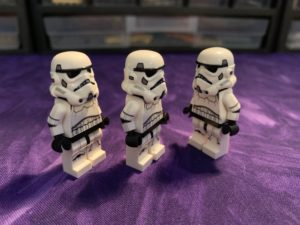 These stormtrooper arms add pad printed detailing consistent with stormtrooper armor. Therefore, this adds just a little added visual bonus to the growing LEGO Imperial Army. I ordered three sets of these arms. After purchasing the new 75262 20th Anniversary Imperial Dropship, I tried them out on the new troopers. These particular troopers have the new, more accurately molded stormtrooper helmets. Paired with the custom arms, these guys look incredible!

Additionally, FireStarToys.com does not just outfit the Imperials. I also was able to order some flight suit arms for the iconic orange Rebel flight suits, and the new blue ones as seen in Rogue One. I found the same great look after fitting the arms to two of my Rebel pilots. The arms just look right. 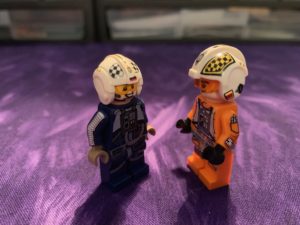 It is a wonder that official LEGO minifigures do not already come with arm printing, but that is still relatively rare in LEGO sets. For that matter, the tattoo arm that I highlighted recently on Fred Flintstone is just another custom LEGO arm that Firestar Toys has in stock. There are many others that can enhance any LEGO minifigure that you have in your collection. Other arms have tattoos, casts, flags, and patches. They have arms for Imperials, for Ghostbusters, for SHIELD agents, and even Greedo. If you need to arm your minifigures, FireStarToys.com is the place.

At the beginning of my LEGO fandom, I very much wanted to keep purity to my minifigures. I did want to use non-LEGO parts, or alter my LEGO elements in any way. However, now that I have found FireStarToys.com and Minifigures.com, I have eased on that restriction. Custom printed parts and elements surely enhance my LEGO builds and the stories I tell through them.

If I say anything through my blogs, or with my LEGO builds, it is that no matter what you do, or how you approach it, tell a great story. LEGO is all about building your imagination, and if a custom brick helps you do that: don’t ignore it!

I have many friends I have made through my time as a blogger for FireStarToys.com and Minifigures.com, and several of them go even further in crafting custom minifigures such as the LEGO Grim Reaper. They create custom molds and elements and paint them. I find their work amazing and stimulating. I am not quite ready to take paints to my minifigures, but you do you. However you tell your story, make telling your story the most important part of your LEGO love. I do.

Whatever we build, I look forward to what we can build together!

I am a brand ambassador for FireStarToys.com and Minifigures.com, but that does not influence my reviews or feelings about the products they offer. No one can buy my opinions. Thank you.